This Week in Houston Food Events: The Final Days of HRW and a Remixed Southern Smoke Weekend The Annie Café & Bar is one of the stunners you in this year's HRW menu lineup. Photo by Kirsten Gilliam
Here's a look at this week's hottest culinary happenings:

Rodeo Goat, 2105 Dallas, will be paying homage to the State Fair of Texas with an over-the-top burger creation available now through Monday, October 5. The “Big Tex” burger features a 44 Farms all beef patty, chicken fried mashed potato cake, bacon, fried onion ring and chorizo gravy for $11.50. It enters Rodeo Goat’s Burger Battle against the reigning champion and winner of three straight Burger Battles, the “Hatch Me If You Can.” Each burger ordered is considered a vote with the most popular selection moving on to the next round of burger battles.

Houston Hispanic Heritage Month brings the return of Latin Restaurant Weeks, a two-week initiative putting the spotlight on Houston’s Latin-owned restaurants and bakeries, as well as Latin chefs, bartenders and caterers. Running Sunday, September 20 through Sunday, October 4, LRW will kick off with more than 25 restaurants around Greater Houston who will offer special prix-fixe and feature menu options ranging from $15-$50, including Andes Cafe, Arepa Xpress, Cafe Piquet, La Fisheria, The Original Marini’s Empanada House and more. A portion of proceeds will benefit Second Servings of Houston to support serving meals to underserved Hispanic communities.

After extending its run through the end of September in order to raise more money to fight hunger and further support the restaurants and industries that support the charitable cause, this year’s Houston Restaurant Weeks is coming to a close. Take your last chance to support a good cause and enjoy multi-course prix fixe menus for brunch, lunch and dinner (with dine-in and takeout options) at over 200 local restaurants.


Ike’s, 1051 Heights, has launched $6 Tuesdays through September, offering one vegetarian and one meat sandwich each Tuesday for $6 a pop. The special $6 sandwiches will be announced every Tuesday on Ike’s Instagram.


Tacos A Go Go continues its "Taco Tuesday Team-Up", a monthly campaign encouraging support of the local restaurant community with a portion of proceeds benefiting I’ll Have What She’s Having. Each month, the taco kitchen will team up with a different restaurant to feature a one-of-a-kind taco on Taco Tuesday throughout the month, with a focus on partnering with woman-owned restaurants. Riel, owned by Mechelle Tran and chef Ryan Lachaine, is up next in September. Lachaine went into the kitchen at Tacos A Go Go with chef/owner Maribel Gomez to create the Gulf Coast Fried Shrimp Taco, made with buttermilk and hot sauce-fried shrimp, and topped with “Comeback Slaw”. It will be available at all Tacos A Go Go locations on every Taco Tuesday throughout the month of September.

One Fifth Houston, 1658 Westheimer, has joined Lucille’s Bars Across Houston Pop-Up series, inviting local bar teams to take over the restaurant’s patio for a full evening of cocktail service and with the bartenders receiving tips and payment as contract employees. This week, the team from Houston’s O.G. craft cocktail bar, Anvil, will be popping up and serving tasty drinks, with one dollar from every featured cocktail sold donated to Lucille's 1913 charity.

Lucille’s, 5512 La Branch, continues hosting its Thursday Patio Pop-Up series (6 to 10 p.m.), inviting local bar teams to take over the restaurant’s patio for a full evening of service and with the featured staff collecting 100 percent of the sales and tips generated by their curated cocktails. One dollar from every cocktail sold will go to Lucille’s 1913, a nonprofit launched to provide meals to Houstonians in need, targeting the elderly in impoverished neighborhoods from Sunnyside to Acres Homes. Restaurants and bars interested in participating in the 1913 Pop-Up Program can contact Lucille’s 1913 at info@lucilles1913.org.

Though the 6th annual Southern Smoke Festival has been canceled due to the COVID-19 crisis, Chris Shepherd’s Underbelly Hospitality is taking the opportunity to celebrate the foundation by smoking meat and raising funds on what would have been the festival weekend (with a portion of proceeds benefiting Southern Smoke’s Emergency Relief Fund, which has distributed $3.2 million to more than 1,700 industry employees nationwide).

On Friday, Hay Merchant, 1100 Westheimer, is getting a sneak peak of Horseshoe Pilsner, a partnership with Karbach Brewing Company and Aaron Franklin’s Hot Luck, benefiting Southern Smoke (the beer hits stores on October 5).

Locals can also hit up a Lamb/Chicken Roast on the patio at One Fifth Med, 1658 Westheimer, from noon to 4 p.m. The $35 shawarma plate (available for dine-in or to-go) includes hummus and pita, lamb or chicken shawarma (wrap or bowl), barberry onion salad, torshi and a spiced chocolate walnut cookie. A vegetarian option is also available. There is also Brisket to Go from the Georgia James Meat Market, 1100 Westheimer. Pre-order for pickup on Saturday, October 3 online. 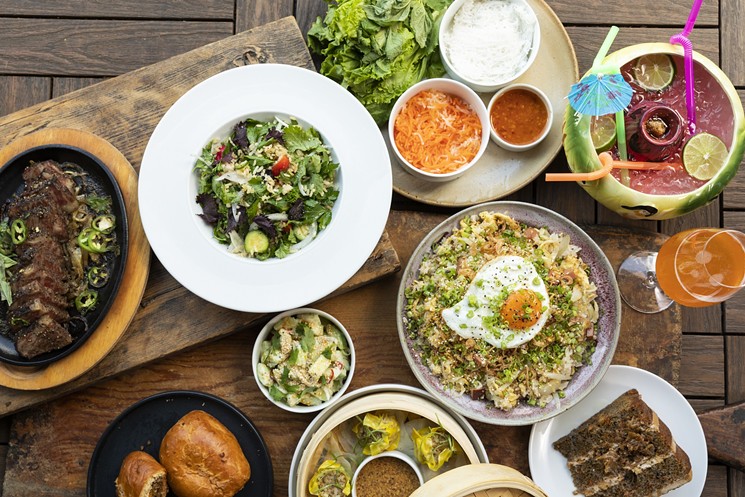 Brunch is back at UB Preserv starting this Sunday.
Photo by Julie Soefer Photography
Sunday, October 4

Brunch is officially back at UB Preserv, 1609 Westheimer; and they’ll serve a Smoked McRib Pork Bun with pickled onions and coleslaw as a Southern Smoke special ($12 for two buns) and a Shamrock Shake with frozen Midori, coconut, rum and smoked whipped cream ($13). Both specials are available to go or for dine-in.

Chuy’s invites taco fans everywhere to join in the celebration with specials on tacos and tequila on Sunday, October 4. Guests can add a crispy beef taco to any dine-in entrée purchase for $1, and the restaurant has $5 shots of 1800 Silver (or equivalent) top-shelf tequila and $1 floaters for dine-in customers to add to their favorite margaritas.

Bowl & Barrel, 797 Sorella, is giving back to a local student organization in Houston through its Big Hearts, Full Tummies promotion to help children who may not be regularly fed during these trying times. For every burger purchased now through October 15, Bowl & Barrel will match it and donate burgers to Big Brothers Big Sisters of America.

$99 Wine and Dine through October at Brennan’s


Brennan's, 3300 Smith, has extended its annual Date Night Deal through October. The $99 Wine and Dine menu for two features a three-course prix fixe menu for two and a bottle of wine (or four glasses) for $99. Choose from Creole classics including Turtle Soup, Blue Crab Cakes, Grilled Filet Mignon and Shrimp and Grits, as well as Bananas Foster and Creole Bread Pudding.


The Original Ninfa’s on Navigation and The Original Ninfa’s Uptown will be featuring a special dish in honor of National Hispanic Heritage Month, with 50 percent of sales from the Campechana de Mariscos going to The Ninfa Laurenzo Scholarship Fund now through Thursday, October 15. Sold for $25, the Mexican seafood cocktail is made with fresh Gulf shrimp and crab meat, Spanish octopus, Texas red fish, cocktail and leche de tigre sauces, and chipotle aioli.

With National Seafood Month coming up in October, Orleans Seafood Kitchen, 20940 Katy Freeway, offering a two-pound Shrimp Boil special for dine-in and to-go customers. For $35, you’ll get two pounds of hot boiled shrimp, corn on the cob, potatoes, sausage and all the fixin's. Delivery options are also available through SpeedyFoods and DoorDash.

No Kid Hungry at Phat Eatery and Tobiuo Sushi & Bar

Phat Eatery, 23119 Colonial Parkway, will participate in the No Kid Hungry campaign by donating $1 from every purchase of its legendary flaky roti canai ($5) to the cause. The promotion runs now through October 16 and is offered for dine-in and to-go orders.

Dessert Gallery Bakery & Cafe, 3600 Kirby, is celebrating 25 years of serving up sweets to Houstonians this month (its silver anniversary), so its Silver Linings campaign which will last for the rest of 2020. The campaign includes a new product launch, the piñata cupcake, as well as a monthly giveaway to customers who share their silver linings on social media. Two winners will be selected each month, with the first giveaway prize being half a dozen of the new piñata cupcakes. The piñata cupcake is fully customizable and comes in every traditional DG cupcake flavor with your choice of colors, rocking a surprise filling, just like their namesake.

Beginning October 1 through the end of the month, Kenny & Ziggy’s, 2327 Post Oak , will be offering specially-priced slices of cakes for $7.95. The first offer for National Dessert Month will be a Triple Threat Chocolate Cheesecake (available through October 10), an all chocolate, multi-layered mound of heaven. The entire cake can also be pre-ordered two days in advance for $89.95 (feeds 20+).
KEEP THE HOUSTON PRESS FREE... Since we started the Houston Press, it has been defined as the free, independent voice of Houston, and we'd like to keep it that way. With local media under siege, it's more important than ever for us to rally support behind funding our local journalism. You can help by participating in our "I Support" program, allowing us to keep offering readers access to our incisive coverage of local news, food and culture with no paywalls.
Make a one-time donation today for as little as $1.