Chef Richard Sandoval's Latin Pan-Asian steakhouse opened at Four Seasons Houston October 30. For the holidays, Richard Sandoval Hospitality is taking a culinary approach to the Las Posadas celebrated across Latin America, Mexico, Guatemala, Cuba, Spain and by Hispanics in the United States. Las Posadas means "The Inns" and is a religious celebration honoring the travel of the Holy Family seeking refuge in Bethlehem, celebrated from December 16 to December 24. At the end of the celebrations, children often break open a pinata in the shape of a star or "Estrella".

Toro Toro, 1300 Lamar, and other Sandoval restaurants around the world will invite guests for its immersive Felizmente Unidos from December 17 through January 3. Chef Sandoval says, " As we look towards 2022, we want to bring a sense of hope, unity and gratitude to our families and the community. Food, music and art all have the power to honor these attributes."

The Ensalada de Noche Buena is a beautiful first course. roasted heirloom beets, green apple, jicama, candied peanuts and pomegranate.
Photo by Richard Sandoval Hospitality
In keeping with the music and art aspect, there will be digital components like the Spotify playlist, campaign artwork in collaboration with artists Victor Melendez and a cooking masterclass led by Sandoval himself. On the culinary side, there will be an exclusive three-course menu available only during dinner with dishes like Ensalada de Noche Buena and Lomo de Cerdo, a dish of Kurobuta pork tenderloin, guajillo chili adobo, creamy mashed potatoes and roasted heirloom carrots served with a plum-cranberry sauce. The third course is Sabores Navidenos, a dessert of crispy bunuelo with caramelized apples and vanilla ice cream.

The cost is $75 per person for the dinner.

"Tis the season to pick up cookie kits.
Photo by Emily Chan
For those wanting to show out of town visitors what a world class city Houston is, a trip to the Museum of Fine Arts Houston is an excellent place to start especially with the current line up of exhibits which include Incomparable Impressionism from MFA Boston, Georgia O'Keefe, Calder-Picasso and Afro-Atlantic Histories. Across the street, the new Nancy and Rich Kinder Building is stunning and boasts Cafe Leonelli, a casual spot to take a break and enjoy the pastries or Italian cuisine from Michelin-starred chef Jonathan Benno.

While visiting, museum-goers can pick up cookie decorating kits for the holidays from the cafe. It's a great deal and convenient way to get a homemade feel without the mess. The kit includes a dozen cookies and four bags of colored icing in a branded tin for $20. The cafe will be open Christmas Eve from 9:30 p.m. to 4 p.m. and closed on Christmas Day.

New cocktails for those who are naughty or nice.
Photo by Dylan McEwan
It's has been difficult to be good this year so those of us that have been a little naughty deserve some holiday cheer, too. Trash Panda Drinking Company, 4203 Edison, is having a Naughty Christmas Party alongside pop-up Confidential Cocktail Club, whose founder, Matt Medina, will be on hand slinging drinks. Medina is a Houston-native who currently works as a bartender in Nashville.

The music will be provided by two sets of DJs. There will be signature cocktails sponsored by Illegal Mezcal and Codigo 1530 Tequila. Attendees can also try one if the new seasonal drinks such as The Mulled A.F. with brandy mulled wine and apple juice or The Antidote, a Thai latte made with clove-infused rye whiskey and oat milk.

The Spiked Abuelita is sweet and hot just like...
Photo by Revelry on Richmond
Revelry on Richmond is hosting its Customer Appreciation Ugly Sweater Holiday Party December 22 beginning at 7 p.m. Happy hour deals will be all night long and there will be holiday-themed cocktails to add a little spirit to the season. Guests should wear their best, or worst, holiday attire for the Ugly Sweater Contest and bring their musical version of " All the Single Ladies" for some karaoke action. There will also be a $25 white elephant gift exchange.

New cocktails include the Spiked Abuelita with mezcal, a Hot Toddy and the Sugar Cookie Martini with vanilla vodka, Amaretto and Bailey's served in a glass rimmed with frosting and sprinkles. Nummy. 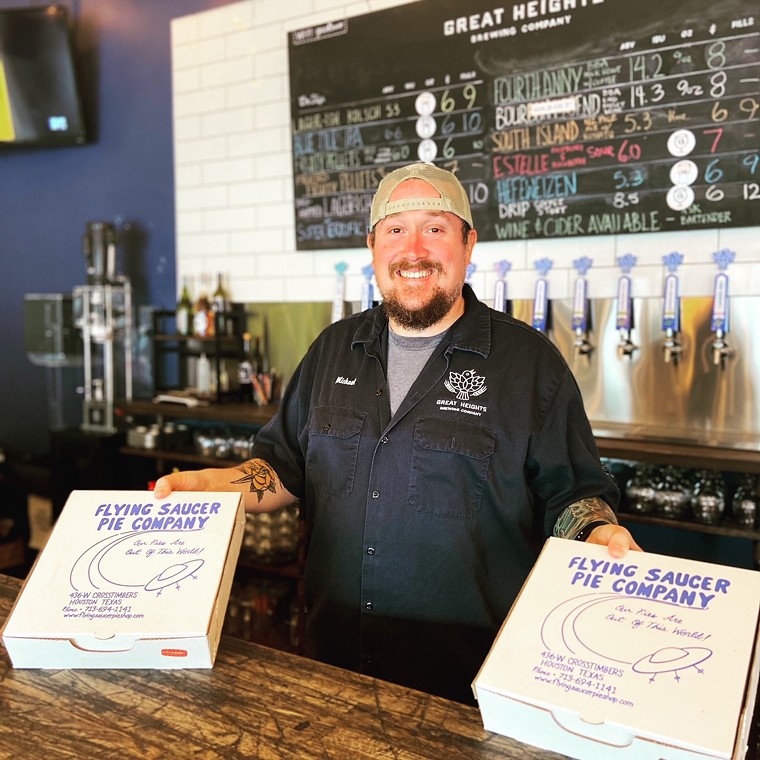 Win a pie, save Christmas.
Photo by Patrick Christian
This Tuesday, Greater Heights Brewing Company, 938 Wakefield, is making its  Pie and Pints Trivia Night even more festive with a special Christmas edition beginning at 7:30 p.m. There will be prizes including a $50 GHBC gift card and a choice of three pies from Flying Saucer Pie Company. The team that wins second place gets $25 and the second choice of a pie. Those in third place receive the last remaining pie.

Just in time for Sharon's family get together. Y'all remember what happened with her Marie Callendar's Pumpkin Pie, don't ya? Go win a pie for Sharon.

For those needing a break from roast turkey and cranberry sauce, State Fare Kitchen & Bar will be offering a holiday brunch at both its Memorial and Sugar Land locations. Part of its 12 Days of Brunch promotion, the brunch is available Christmas Eve and New Year's Day as well. Guests can choose from items like Cathead Biscuit Sandwiches, Chicken fried Steak and Eggs, Ham and Cheese Omelet, Quinoa, Kale and Eggs and a Southwest Vegan Tofu Scramble. There are also plenty of burgers and sandwiches, too.
KEEP THE HOUSTON PRESS FREE... Since we started the Houston Press, it has been defined as the free, independent voice of Houston, and we'd like to keep it that way. With local media under siege, it's more important than ever for us to rally support behind funding our local journalism. You can help by participating in our "I Support" program, allowing us to keep offering readers access to our incisive coverage of local news, food and culture with no paywalls.
Make a one-time donation today for as little as $1.