This Week in Houston Food Events: Soup's On, Tamales Depart Curry Laksa at Phat Eatery will spice up your insides. Photo by Sabrina Miskelly

This is the month to enjoy a hot bowl of nutritious soup, especially with the cold temps that have finally made their way to Houston. Last week, we told you about Brennan's famous turtle soup and seafood gumbo and Molina's Sopa de Tortilla, Chili con Carne and Creamy Poblano Soup. There are even more places to get a steaming bowl of goodness in our city.

Phat Eatery, 23119 Colonial Parkway, is offering its Curry Laksa ($15) with an aromatic coconut curry broth over a mix of rice and egg noodles topped with bean sprouts, tofu and a choice of chicken, chicken and shrimp or a mix of mushroom, yu choy and tomato for a vegetarian dish. Creamy chowder gets a boost from Prestige oysters.
Photo by Becca Wright
Out in San Leon, Pier 6 Seafood and Oyster House, 113 6th, is offering two soups for the season. The first is a classic oyster chowder, New England-style, filled with Prestige oysters, melted leeks, smoked bacon and potatoes. It comes with oyster crackers for $8.99. Chef Joe Cervantez has also created a shrimp tortilla soup, a seafood twist on the Tex-Mex version, swapping out Gulf shrimp for the usual chicken. It has roasted peppers, crispy tortilla strips and cilantro for $10.99.

Owner and executive chef Philippe Verpiand and wife Monica Bui have created two prix-fixe menus for the month of January to help raise funds for Rescued Pets Movement, a non-profit organization that has saved the lives of nearly 60,000 companion animals by providing rescue, health and foster care. It has also helped to transport homeless animals across the country as people are returning pets back into the system at record numbers due to the pandemic.

Another charity, usually one involving children or animals, will be chosen for February.

Everyone loves a good steak night and The Barking Pig, 2307 Ella, has one of the best. This neighborhood sports bar in the Heights offers two steak choices; a center cut filet ($24.99) or a hand-cut rib eye ($20.99). Both come with a side salad, mashed potatoes and a Chef's Choice extra. There is also a BBQ Butterflied Chicken Breast ($17.99) for non-beef eaters.

The Chicken Fried Chicken for $10 is a great deal, too.
Photo by Troy Fields
The pub has daily specials throughout the week as well including $10 Italian Sausage Pizza on Monday, $10 Build-Your-Own Burgers on Tuesday and $10 Chicken Fried Chicken on Wednesday. For those who are looking to be more frugal in the new year, whether by choice or necessity, the $2.50 taco al pastor Friday special is a thrifty option with reverse happy hour from 9 p.m. to midnight helping to sweeten the
deal. Buy three, get one free for the grand opening.
Photo by Angel Santiago
This French pastry shop will celebrate its grand opening from 10 a.m. to 10 p.m. with a deal on its gluten-free and artificial colors-free macarons. Customers who buy three will receive one free. The store will also announce the five winners of its Free Macarons for a Year.

Besides macarons, there are Napoleons, eclairs, cakes and French gelato. 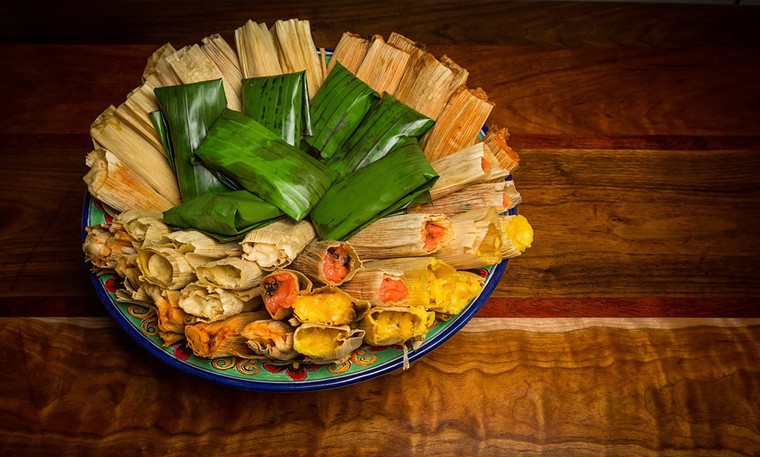 Last call for a Picos tamal.
Photo by Nick de la Torre
Arnaldo Richards' Picos has been serving up holiday tamales since November 17, 2021 from its annual Picos Tamale Stand in the parking lot. All good things must come to an end and its last day will be January 8. Customers can still make a tamale run and get its savory Tamales Oaxaquenos and Tamales Nortenos or try its two gluten-free dessert flavors, the Chocolate Tamal and the Tamal de Elote.

There are few more soul-lifting meals than a dish of tender oxtails and creamy grits. Taste Bar + Kitchen, 3015 Bagby, saves the special for Sunday brunch only. The dish is $21 and rice can be substituted for the grits, but why would you?

There are also plenty of waffle choices, savory and sweet, plus Jerk Lamb Chops and Eggs or the Taste Breakfast with two eggs, grits or hash browns, bacon and a waffle. Still, if it's Sunday, go for the oxtails.
KEEP THE HOUSTON PRESS FREE... Since we started the Houston Press, it has been defined as the free, independent voice of Houston, and we'd like to keep it that way. With local media under siege, it's more important than ever for us to rally support behind funding our local journalism. You can help by participating in our "I Support" program, allowing us to keep offering readers access to our incisive coverage of local news, food and culture with no paywalls.
Make a one-time donation today for as little as $1.