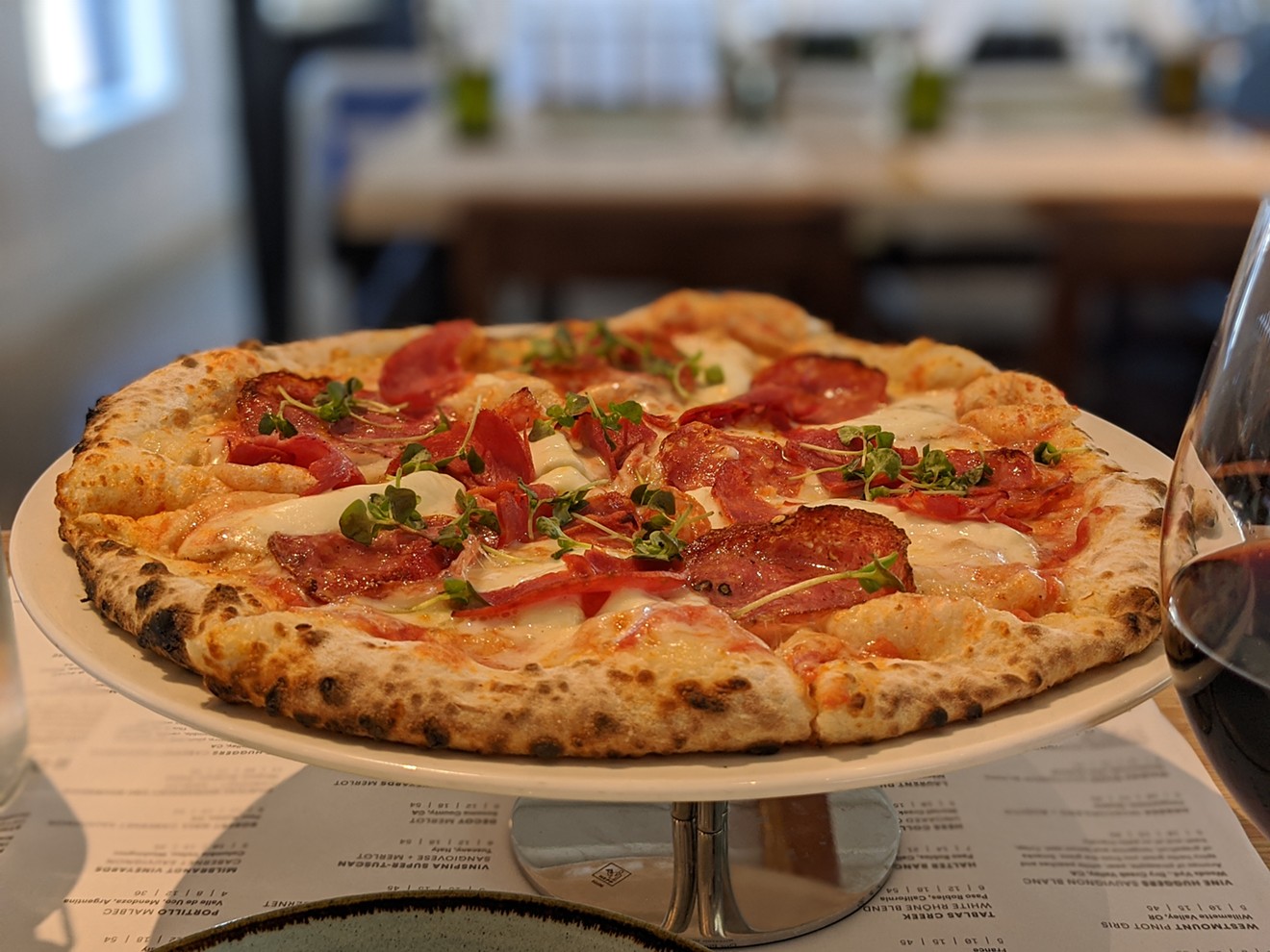 The Butcher pizza from Sixty Vines in Rice Village. Photo by Carlos Brandon
It's not exactly a pizzeria. But it's not exactly not one, either. You catch our drift?

Sixty Vines, the Dallas-based wine-on-tap concept, just opened the brand's first Houston store in Rice Village. A fitting home for the out-of-town upscale bar, as Rice Village has slowly been invaded by out-of-town chains (both retail and dining) over the past few years. The newly opened Nappa Valley concept is within walking distance of Shake Shack, Torchy's and Hoppdoddy to name a few.

Still, the concept is unique and wildly on brand for its affluent new digs. With draft wine at its core, the bar is named after its 60 unique wine taps, each temperature-controlled and representing various wine regions with an obvious focus on Northern California. From there you get an open kitchen with its focus on Nappa-inspired fare, a wood burning oven for pizzas and veggie dishes, two levels of contemporary dining space and a large greenhouse patio. 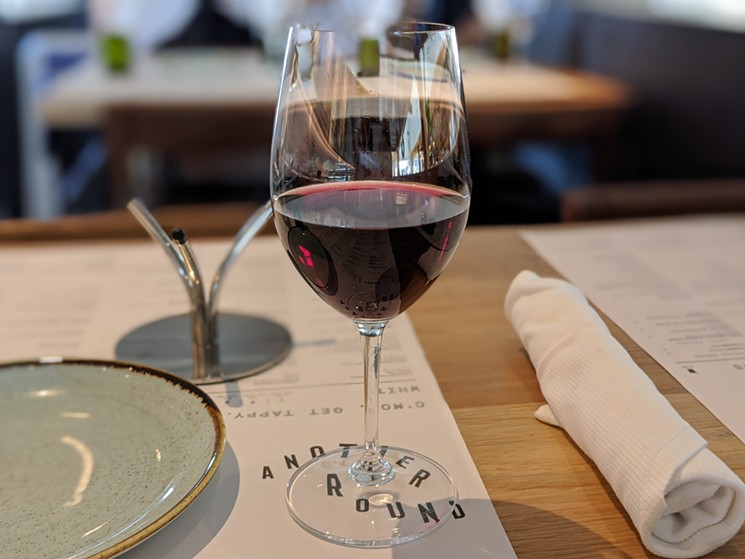 Pinot Noir from among the sixty wines on tap available at Sixty Vines.
Photo by Carlos Brandon
But let's cut to the chase. We didn't visit Sixty Vines for the airy Nappa aesthetic and self-care holistic chill vibes (no matter how vibey). We went for the pizza.

The words wood-fired are almost always a prelude to good pizza. Even a grossly mediocre pie is elevated by the char of real flames and wood smoke. As expected, these Nor-Cal inspired pies are crust and ingredient forward. While a little spongy, the crust had a nice touch of char and a flatbread characteristic that wasn't altogether unwelcome.

The Butcher, a tomato sauce pizza featuring soppressata, capicola, calabrese, provolone and mozzarella, was heavy on the cheese while disappointingly light in the sauce. Practically lost in the breadiness of the crust, the lack of sauce left a noticeable lack of acidity and mousture on a pie with two types of cheese and three meats. The assorted salami did add a wonderful Mediterranean flare to a slice that paired wonderfully with a glass of Meiomi Pinot Noir (on tap of course).

The Butcher pizza from Sixty Vines in Rice Village.
Photo by Carlos Brandon
For a wine bar with an extensive menu of sharables, salads, pasta and full entrees, the pizza at Sixty Vines is far from an afterthought. The wood-fired oven and meticulous choice of ingredients make that abundantly clear. Yet, this is not your local pizza snob's best kept secret. No one is rushing to Rice Village at lunchtime for the world-class artisan pies.

Sixty Vines bakes more than adequate pizza for what it is — a Nappa imitation bar with a clear focus on good wine and a less refined focus on what to pair it with.
KEEP THE HOUSTON PRESS FREE... Since we started the Houston Press, it has been defined as the free, independent voice of Houston, and we'd like to keep it that way. With local media under siege, it's more important than ever for us to rally support behind funding our local journalism. You can help by participating in our "I Support" program, allowing us to keep offering readers access to our incisive coverage of local news, food and culture with no paywalls.
Make a one-time donation today for as little as $1.