Deep Dish Starburst from Houston's original Star Pizza Photo by Carlos Brandon
There is a pizza spectrum. That’s right — a pizza spectrum. On one end of this spectrum the word “Italian” is printed boldly in red, white and green letters. On the other end, the word “American.” Every pie sold in the United States hovers somewhere between those two words. Some land surprisingly close to the former, while others are planted firmly in the New World. When it comes to Chicago deep dish, the Italian part of this equation is merely an afterthought.

Deep dish pizza is a uniquely American creation. Inspired by the dish’s Italian heritage, sure. Created by second generation Italian immigrants, yes. And yet, as conceptually separated from those roots as it is to apple pie.

While Chicago is the official, obvious, undisputed birthplace and Mecca of the style, Houston has quietly boasted a deep-dish reputation for nearly 45 years thanks to one business. The original Star Pizza on Norfolk and Shepherd has been serving authentic, Chicago-style deep dish in the same green and white house since 1976. Local craft brews on tap for under $5 are always a plus.
Photo by Carlos Brandon
While the company now has a second Houston location in the Heights, and earlier this year opened its first suburban location in Katy, the Norfolk Star Pizza #1 is where the history and legacy of the institutional pie joint still lives and breathes.

The cramped quarters of a converted early 20th century home make for an intimate and familiar setting. Small wooden booths, each adorned with their own hand-painted murals, place you at arm’s length from the person across the table. The whole experience is rather appropriate in its sense of history. A refreshing departure from the lifeless stucco and plaster that plagues so much of this city. 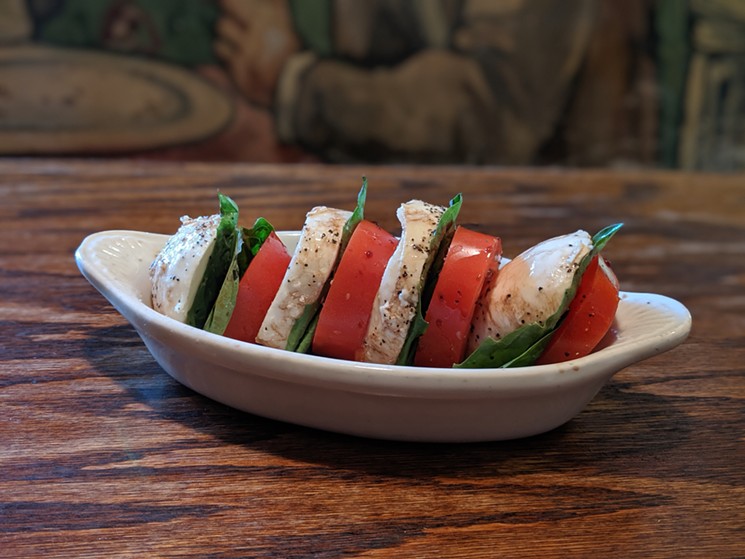 Caprese Salad from Star Pizza
Photo by Carlos Brandon
A caprese salad starter was passable, though on the whole underwhelming. Far too thick slices of mozzarella overpowered a dish meant to refresh, while equally hefty tomato slices robbed the dish of its characteristic subtlety.

Naturally, we ordered the deep dish. A 10” Starburst, the house specialty, includes ground beef, Italian sausage, pepperoni, onions, mushrooms and bell peppers. Served in its traditional steel pan, the outer crust, which like the pizza sauce is made in house from scratch, had developed a nice crispiness around the top that faded to bready goodness near the bottom. Deep Dish pizza from Star Pizza
Photo by Carlos Brandon
Toppings were excellent. The pepperoni disappears into the many layers of sauce and cheese, only to appear by surprise in every other bite. Italian sausage is hearty with a touch of spice, while the onions and peppers add a much-needed crunch which is all rounded out nicely by the heavy dose of garlic in the sauce.

Crust consistency across the pie was impressive, though likely aided by an unfortunate lack of cheese. The pies at Star Pizza are true deep dish, and really quite delicious, but they lack the generous, perhaps ill-advised levels of cheese seen at some of the more beloved Chicago joints.

Undoubtedly the best place in town to cure a nagging, unrelenting urge for Chicago-style pizza, this H-Town essential could still use a few more pointers from the OG’s in the windy city, even all these years later. That said, Star Pizza remains a Houston treasure. One we’re glad to see expanding.
KEEP THE HOUSTON PRESS FREE... Since we started the Houston Press, it has been defined as the free, independent voice of Houston, and we'd like to keep it that way. With local media under siege, it's more important than ever for us to rally support behind funding our local journalism. You can help by participating in our "I Support" program, allowing us to keep offering readers access to our incisive coverage of local news, food and culture with no paywalls.
Make a one-time donation today for as little as $1.