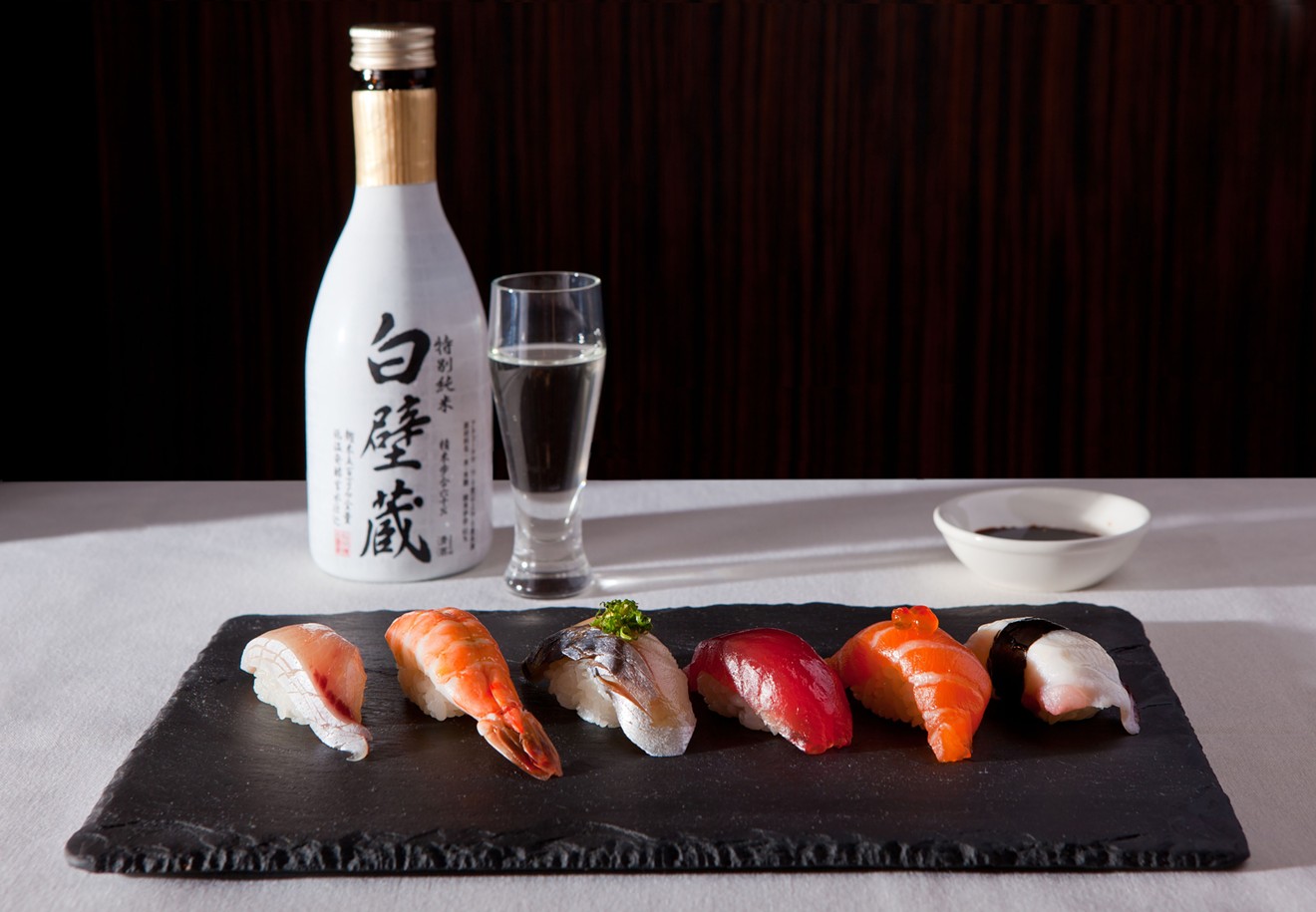 Uptown Sushi has gone even more uptown. Photo by Daniel and Peggy Chang

Uptown Sushi, 1131 Uptown Park Boulevard, has reopened after a six month upgrade and renovation. The family-owned Japanese sushi and fusion restaurant has been serving the uptown Galleria area since 2004. Co-owner Peggy Chang says "After 15 years of serving our inventive cuisine, we were inspired to redesign our restaurant to reflect the renovations at Uptown Park".

Uptown Sushi's ethereal walls.
Photo by Daniel and Peggy Chang
The new decor consists of bold yellows and muted grays along with black wall graphics. There are banquettes and dining tables, which seat up to 155 guests, with flexibility for large parties. The large windows let in natural light and the open concept allows diners to be part of the action as they watch the chefs at work. The elevated seating area allows for an even better perspective. 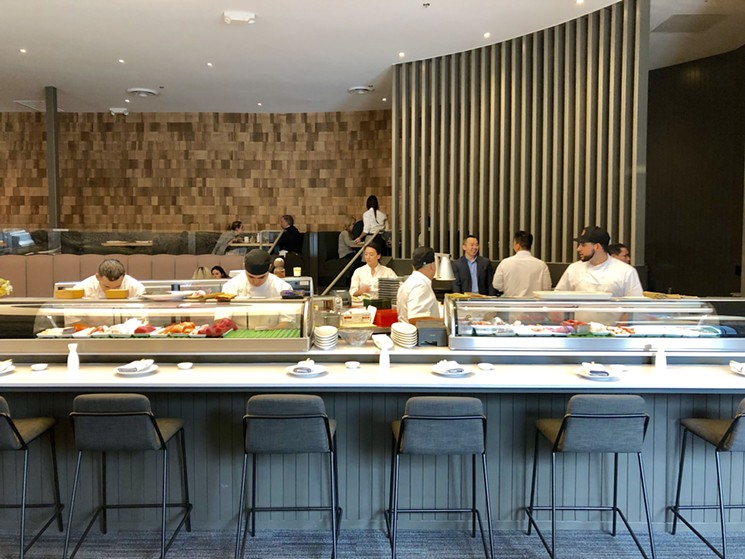 Be part of the scene at Uptown Sushi.
Photo by Daniel and Peggy Chang
Dishes range from the traditional Japanese Black Snapper to creative choices like foie gras sushi served with sweet applesauce and apple chips. The menu offers an extensive list of sushi, sashimi and nigiri, but there are dinner options like short rib and whole branzino as well. Rounding out the menu are cold and hot appetizers. There is a full bar with hand-crafted cocktails and a cold sake and wine menu.

Sweet Paris Creperie and Cafe, 9595 Six Pines, opened in The Woodlands February 26. The Market Street area is perfect for the French cafe vibe that comes from Allison and Ivan Chavez's creperie. Seeing crepes as a canvas, the husband and wife duo have drawn from their travels to create a menu of savory crepes like the Croque Madame and the chicken carbonara plus sweet crepes like the Nutella and apple cinnamon creme brulee.  There are breakfast crepes served daily until 3 p.m. so you can be a slug-a-bed and still make it out for breakfast and dare we suggest, a glass of rose.

Linger at lunch like a Parisian.
Photo by Shannon O'Hara Photography
Besides sweet and savory crepes, there are panini, salads, soups and waffles. For an indulgent treat, try one of the milkshakes. Flavors include Nutella Graham, Very Berry and Dulce de Leche.

This makes the seventh location for Sweet Paris, with the most recent having opened in December 2018.

Salmon lays upon a bed of healthiness.
Photo by Lorretta Ruggiero

Flower Child, 1900 Lake Woodlands, opens later this month. This makes the second Houston area location. The first opened in September 2018 at Uptown Park. The Sam Fox concept is geared toward folks looking for healthy, fresh ingredients with a local slant. The food is colorful and meant to please vegetarians, vegans and omnivores alike.

There are soups, hummus and avocado toast to start. Customers can choose one of the chef-designed salads, wraps or bowls or try the plate option, which allows diners to create their own meal from choices like sweet corn and quinoa, spicy Japanese eggplant and Sichuan green beans, plus proteins such as sustainable salmon and grass fed beef.

For hipster hippies, there are several local beers to choose from, along with kombucha and cold brew on tap.

How sweet it was.
Photo by Jeff Balke
Rhotey Rotisserie, 9296 Westheimer, closed February 16. Owner Vincent Taylor received a lot of love for his European-style rotisserie chicken sandwiches. Our own Jeff Balke gave Rhotey's chicken sandwich a near perfect review in his column here in the Houston Press. Unfortunately, Taylor has decided to close up shop after only six months. Though the food never failed to please, there wasn't enough customer traffic to keep it going.

All may not be lost, however, including the porchetta sandwiches. Taylor answered heartbroken diners on Yelp saying that he plans to reopen in the future with a new format. Some loyal patrons found the location inconvenient, so maybe a better spot will, well, hit the spot. It remains to be seen where and when the new venture begins.

Freebirds World Burrito, 11770 Westheimer, has closed permanently. We have reached out to the company, but have not received an answer as to why. There is speculation that it is due to a rent increase. Nothing new in a city with a booming population and zooming rents. 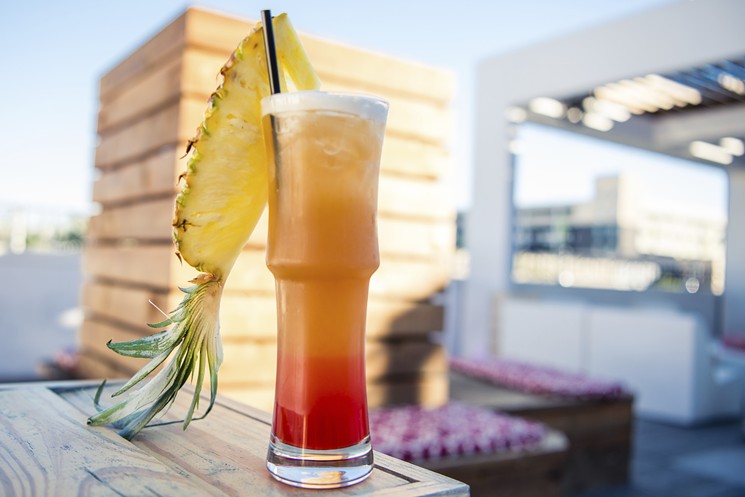 Open a Caymen Account at 77 Degrees.
Photo by Get Me Friends
77 Degrees, 2416 Brazos, is set to have its grand opening March 7. The rooftop bar sits atop its Irish compatriot, Jack and Ginger's, and will offer Caribbean-style tapas and a variety of cocktails from tropical to traditional. Expect lots of rum. For nosh, there are dishes such as pineapple poppers, Ahi tuna kabobs and Cubano sliders. While the Houston weather has been a muthaflippa this past month, spring is on the horizon and what better way to welcome it than sipping a pineapple rum drink while admiring the Houston skyline (and some Houston eye candy) from the multi-level cabana seating.

77 Degrees and Jack and Ginger's Pub come from Union Venture Group, founded in Austin by brothers Jeff and Darren Van Delden. There are plans to open 77 Degrees in Dallas, as well.

Wula Buhuan, 13346 Briar Forest, had its grand opening February 20. There is an extensive menu of Sichuan favorites with three spice levels, so pick the one you can handle. Spicy chicken cubes seem to be a favorite dish.

Standards like kung pao chicken, Mongolian beef and salt and pepper shrimp are available, as well as more adventurous fare like Sichuan-style rabbit and fried intestines.

Drink coffee like a rock star at Legends.
Photo by Rebecca Wright

Legends Coffee and Cafe, 25707 Westheimer Parkway, opens March 1 in Katy. The family-owned restaurant comes from husband and wife duo Steve and Mickie Blackmon, who along with their daughters, Teahra and Reignie, are bringing coffee, food and music together in a new cafe.

The specialty coffee is considered "third wave" because it is sourced globally and then roasted locally.  Legends will offer the beans as cappuccino, various lattes, cold brew and nitro brew. There will also be a hot tea service with teas from Rishi Organic Teas.

Rock out with caffeine and music at Legends.
Photo by Rebecca Wright
Mickie's sister, Elizabeth Duncan, is a classically trained chef who will craft the menu and oversee kitchen operations. Deli sandwiches, panini and flatbreads make up the lunch and dinner menus, along with scones, gelato and pastries for dessert. The breakfast menu will have tacos and breakfast sandwiches.

The decor features some of Mickie Blackmon's rock memorabilia and the couple plans on showcasing local musicians and singers at the cafe and  on the large outdoor patio. Already on the upcoming line-up are local talents Smith Deville and Megan Whitaker.

Make up your mind at U Maki Sushi Burrito.
Photo by Harriet Yim

U Maki Sushi Burrito, 13445 University Boulevard, is on track for its Sugar Land debut in mid to late spring 2019. It will be one of a number of food and retail businesses that will be located in the new University Commons shopping center.

This will make the third location of the sushi burrito restaurant in the Greater Houston area. It will also be the first franchised location, owned by Juan Pablo Guerra. The other two locations are in Katy and Vintage Marketplace.

Diners can create their own sushi burritos and bowls with over 40 fresh ingredients to choose from or opt for the U Maki favorites like the Wild Cajun, made with fried crawfish tails or the Fatboy, a burrito loaded with tuna, salmon, snow crab mix, shrimp tempura, spicy mayo and unagi sauce. Add some U Maki Fries, topped with snow crab mix, green onions and a blend of sauces and then, "run fatboy, run".

Feng Cha, 13445 University Boulevard, is set to open in the spring as well. There is another Houston-area location at Katy Mills. This will be the fourth location in the U.S. for the China-based company which has expanded to over 700 franchises, since its founding in mid-2016, according to its U.S. website.

The teahouse is known for its boba and milk foam teas, plus freshly-baked desserts.


Jinya Ramen, 11930 Barker Cypress, opened February 18. This makes the sixth location in the Greater Houston area, bringing high quality ramen to the suburbs. Founder, Tomonori Takahashi founded the first Jinya in Tokyo, Japan in 2000. He brought his concept to California and now there are franchises across the United States and Canada.

The noodles for the soups are made in house and aged for three days. There are thin and thick noodles, depending on the dish. Just as in Italian cuisine, where the pasta shape depends on the sauce, the noodles here are chosen to fit the ingredients. Noodle slurpers can choose between a variety of chicken, pork, seafood and vegetable ramen. There are mini tacos made with crispy wonton shells for a yummy snack.

Jinya loyalists rave about the Tonkatsu Black, a pork based ramen. There are also rice bowls and Tokyo curry for something different, but the long-simmered broths and quality ingredients are what keep customers faithful to this ramen chain among the multitudes of ramen spots popping up across the country.

Irish Cowboy, 2300 Louisiana, closed January 1
Mel's Seafood Shack, 2521 N. Durham, closed January
Stuttgarden Tavern, 4002 N. Main, closed January 20
KEEP THE HOUSTON PRESS FREE... Since we started the Houston Press, it has been defined as the free, independent voice of Houston, and we'd like to keep it that way. With local media under siege, it's more important than ever for us to rally support behind funding our local journalism. You can help by participating in our "I Support" program, allowing us to keep offering readers access to our incisive coverage of local news, food and culture with no paywalls.
Make a one-time donation today for as little as $1.