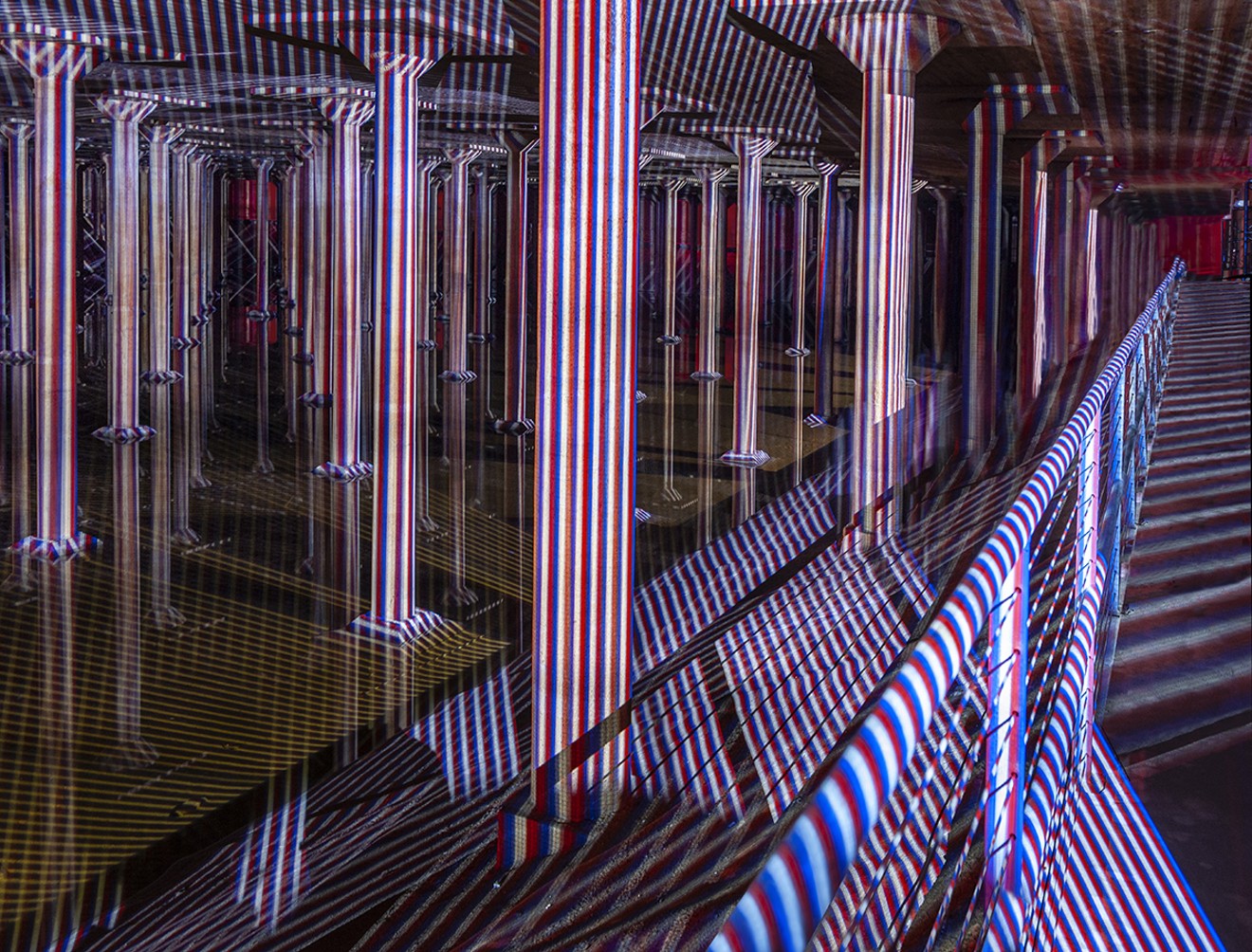 "Carlos Cruz-Diez at the Cistern: Spatial Chromointerference" uses 26 projectors to bounce a rainbow of colors off the columns, interior walls, walkways and water of our undergound city reservoir. © Carlos Cruz-Diez / ADAGP, Paris 2018, photo by Paul Hester
We've never seen the Cistern like this before. Sure, last year's “Rain: Magdalena Fernández” was quite impressive and a fitting start for Buffalo Bayou Partnership's public art program inside the cavernous, underground city reservoir.

But now iconic artist Carlos Cruz-Diez — who dabbles in color theory, precise engineering, architecture and motion — plans to throw off our perceptions as he bounces every color of the rainbow off the walls, columns and shallow waters of the 87,500 square foot space in "Carlos Cruz-Diez at the Cistern: Spatial Chromointerference."

Judy Nyquist, who is on the board of the Buffalo Bayou Partnership and serves as co-chair of its Public Art Committee, says it's the movement of lines that throws off the perception of the viewer. "We walk up to it and it’s not what it seems. Even his works that hang on the wall have a three-dimensional quality. If you move around them your perception of what you’re seeing is really dazzling and vibrating and your mind isn’t connecting with what you’re seeing.

"That’s his intention. Not to make it uncomfortable, but to elicit this response and amazement from color that plays with our perception. In its extreme we become party and actor in this exercise, never really a passive viewer," says Nyquist. "In this case it’s like Alice in Wonderland, walking into the painting, becoming part of the work. It’s almost dizzying at first.

"The thing that’s so amazing about that water is it creates an idea of infinite depth. The columns reflect; it seems like it never ends, feels like a two story building," says Nyquist.

"One of the interesting things is that we’ll have objects in the water. These are cubes so they’re also rectilinear. They’re being set in that shallow water that will also catch the light and play off it," says Nyquist. "There was nothing on the floor or the surface in the previous installation."

And yes, this public art does come with a warning. "There is a disclaimer in the guides. There’s a sentence on the wall text," says Nyquist. "It’s dark and there’s a lot of color and movement. If you’re uncomfortable, the exits are clearly marked; a guide will let you out. For someone who is claustrophobic, in that huge space, it gets very disorienting."

Nyquist says that viewers will become part of the experience, and that wearing white or light-colored clothing is the best way to interact with the installation. "We will be issuing — for people who don’t have white on and are amenable — we will be issuing a sort of lab coat for visitors."

Carlos Cruz-Diez's "‘Double Physichromie" appears to change shape and color as viewers change their perspective. This summer it moves to its new home within the University of Houston campus.
Photo courtesy of Public Art of the University of Houston System
This certainly seems to be the decade for Carlos Cruz-Diez in Houston. Over at the University of Houston, his "Double Physichromie" is being moved from the Welcome Center and is being re-sited this summer to a green space near the College of Technology and Graduate College of Social Work buildings. Comprised of more than 2,000 individual pieces of aluminum and steel, it was Cruz-Diez's first public sculpture commission in the United States.

At the Museum of Fine Arts, Houston, his "Crosswalks of Additive Color" transformed the intersection of Main Street and Bissonnet in 2011. That same year the MFAH partnered with the Cruz-Diez Foundation to present his first large-scale retrospective in "Carlos Cruz-Diez: Color in Space and Time."

Cruz-Diez exhibits locally with the Sicardi Gallery, who assisted with the installation at the Cistern.

The artist's son will be on hand for a public event in conversation with Mari Carmen Ramírez, Wortham Curator of Latin American Art and Director of the International Center for the Arts of the Americas at the Museum of Fine Arts, Houston. Talking Color: Celebrating Carlos Cruz-Diez in Houston is scheduled at 6 p.m. May 8, Elizabeth D. Rockwell Pavilion, University of Houston M.D. Anderson Library, 4333 University, bit.ly/TalkingColor, free.