Martin Luther "Daddy" King Sr. and State Representative Mickey Leland during the nation's first MLK Parade in January 1978 in Houston. Photo courtesy of Black Heritage Society
Each year we ask the same question: Why does Houston have not one, but two, different Dr. Martin Luther King Jr. parades and why does it have to be so confusing? So this was the year we decided to get to the bottom of things and find out if the parades could ever be combined and, if not, if they could at least be scheduled at different times so folks could attend both.

Point 1: Dueling Parades
Maybe the parade organizers could be described as long-warring factions at some point, especially in the early years when a coin toss at City Hall decided which would be the "real" parade for that year, but nobody's dueling now. With the Black Heritage Society celebrating the 40th Annual "Original" MLK, Jr. Parade & Holiday Celebration, and the MLK Parade Foundation celebrating the 24th Annual MLK Grande Parade, both institutions now have a longstanding foothold in the Houston community and neither one intends to back down. So unless President Donald Trump decides to weigh in on the matter and pick a side, nobody's going to take the bait and lob the first verbal volley this time around.

Point 2: Same Bat-Time, Different Bat-Channel
"That’s something that’s being discussed as we speak and I think we’re making progress," says Charles Stamps, parade chairman and CEO of the MLK Grande Parade, when asked if the parades could start at different times. "The City of Houston makes the schedule; we don’t." To be fair, the City has much on its plate that weekend, including the Chevron Houston Marathon and Half Marathon, the inauguration of the Afghan Cultural Center, an event organized by The Ensemble Theatre, and a weekend full of events for both parade organizers. 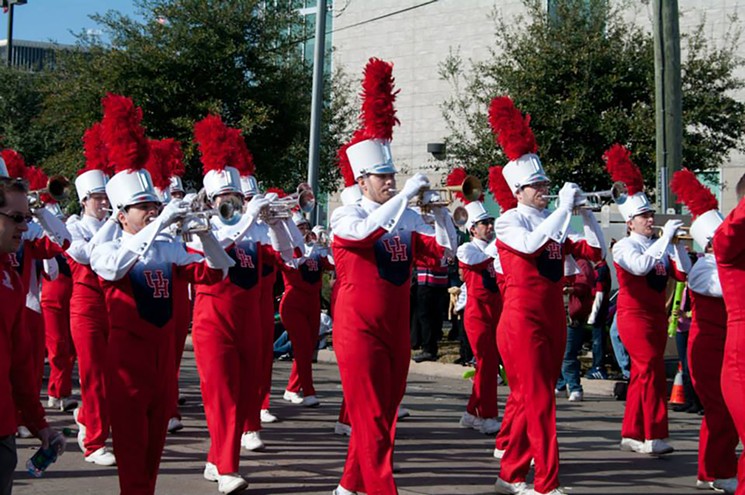 The 24th Annual MLK Grande Parade will be led by the Manor High School marching band, a corps style band different from the traditional hip hop band. Shown here is the University of Houston band from a previous year's parade.
Photo courtesy of the MLK Grande Parade
Point 3: Pooling Resources
Anybody who feels that our government has gotten too big for its britches will understand why combining parades might not be in anybody's best interests. Both parade organizers are faced with complex challenges with the planning and scheduling of the parades and ancillary events. "We have 45 marching bands with the average size of 160," says Stamps. "You have community groups, military groups, ROTC, Masons, Shriners. It's not hard to contemplate: It's a logistical nightmare."

Point 4: Maybe It's Already One Big Parade Anyway
"The parade routes actually almost come together anyways. One is just south of Minute Maid Park, the other is at Minute Maid Park," says Stamps. "[The City] may not say this, but I’ve been doing this for 25 years and I know exactly what they’re doing. They’re maximizing their resources. It’s cheaper. If you need 80 police officers for one parade, you need 160 officers for two parades. But if they’re combined, those 80 officers — put one police officer on every other block — it works out. So kudos for the city."

Point 5: Why Does It Seem So Confusing?
"I would suspect that it is confusing to a number of people," says Sylvester Brown, project manager for the Black Heritage Society, host of the "Original" MLK, Jr. Parade. "We are the only officially licensed parade, the Intellectual Property Management license issued by The King Center in Atlanta, Georgia. That’s why we’re able to have the statue at MacGregor Park. This is our 40th year, and many people may not know we are the officially licensed organization. And for many people who might be confused, oftentimes that confusion is because they might not be educated. Many think there are two rival parades. We are the first ever organization to conduct the parade in this nation."

Brown is referring to the historic parade and ribbon-cutting ceremony for the naming of the street, Martin Luther King Jr. Boulevard, back in January 1978. It was a bitterly cold winter day, with temperatures dropping to 20 degrees; in attendance were King's father (Martin Luther "Daddy" King Sr.), State Representative Mickey Leland, Ovide Duncantell (Black Heritage Society founder) and other dignitaries. Brown says the buses weren't rolling because there was ice on the ground and only a few bands made it out that day — Sterling and Jones (and maybe Wortham) high schools — and that was only because they walked over from their campuses. 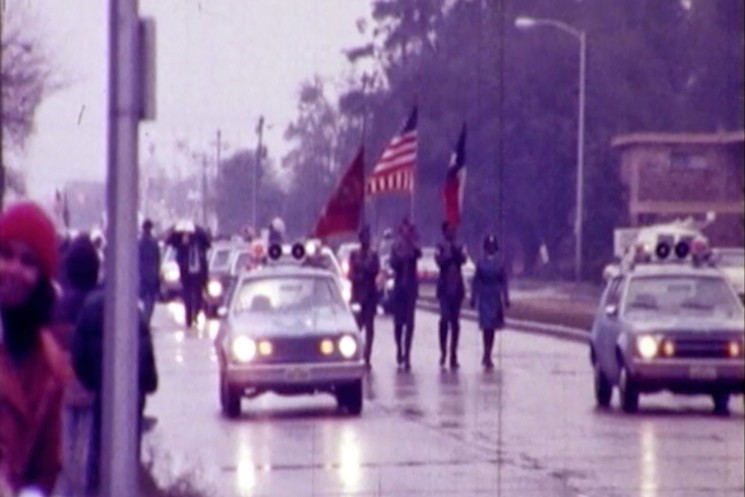 This year marks the 40th anniversary of the "Original" MLK, Jr. Parade, the first of its kind in our nation.
Photo courtesy of Black Heritage Society
Point 6: Remember the Reason for the Day
"We want everybody to celebrate the life and the liberty of Dr. Martin Luther King Jr. That’s what's most important to us," says Brown. "As long as folks are not confused about why we celebrate this day. It is a time that we come together as a nation, not just as a community, but as a nation. We’re encouraging all of our Houston members to join us as we celebrate the life and legacy of Dr. Martin Luther King Jr. We continue to push the dream of Martin Luther King Jr. We are celebrating in collaboration with the national AFL-CIO who has moved their celebration from Washington, D.C. to Houston this year."

How to Choose?, How to Choose?
So which parade will you be attending this year? Maybe you've got a family member participating in one, or there's a celebrity you've just got to catch in the other and the choice is made easy. Either way, we'll provide the 411 for both and, as Charles Stamps (MLK Grande Parade) reminds us, "Dress warm. Come early. Enjoy the show." 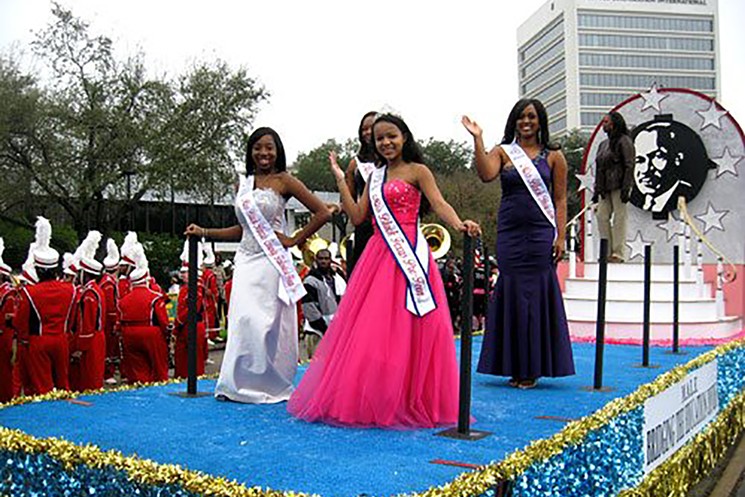