THE INFINITE Makes Its Landing In Space City

Stars are in your eyes with THE INFINITE. Photo by Melissa Taylor
Save your bucks, Jeff Bezos, Richard Branson and Elon Musk. You don't have to be a billionaire to make a trip to outer space. And as much fun as it might be to sit next to Miss Piggy for a reboot of Pigs In Space, it really isn't that difficult to go where no pig man has gone before. Thanks to THE INFINITE, traveling to the outer limits — or at least out of this world — is quite achievable at Sawyer Yards.

THE INFINITE, the first multi-sensory, interactive virtual reality experience to transport visitors aboard the International Space Station, has touched down in Houston for a limited run, making its debut in the United States following its inaugural run in Montréal. Produced by INFINITY EXPERIENCES, a joint venture of PHI Studio and Felix & Paul Studios, THE INFINITE redefines the frontiers of the user experience by allowing visitors to roam freely inside a life-scale replica of the space station, bringing audiences closer to the feeling of being in outer space than ever before.

The 12,500-sq.-ft. exhibition is an extension of the recent Primetime Emmy Award-winning immersive series, Space Explorers: The ISS Experience, the largest production ever filmed in space, produced in association with TIME Studios. Shot over a period of nearly three years and producing more than 200 hours of high-end virtual reality footage, the immersive series documents the life of eight international astronauts inside, and outside, the space station.

"PHI really specializes in contextualizing. We consider Felix & Paul's content to be art, so we wanted to develop an installation, or in this case, a large scale exhibition where we could put this content at the forefront," said Éric Albert, CEO of the PHI Center. 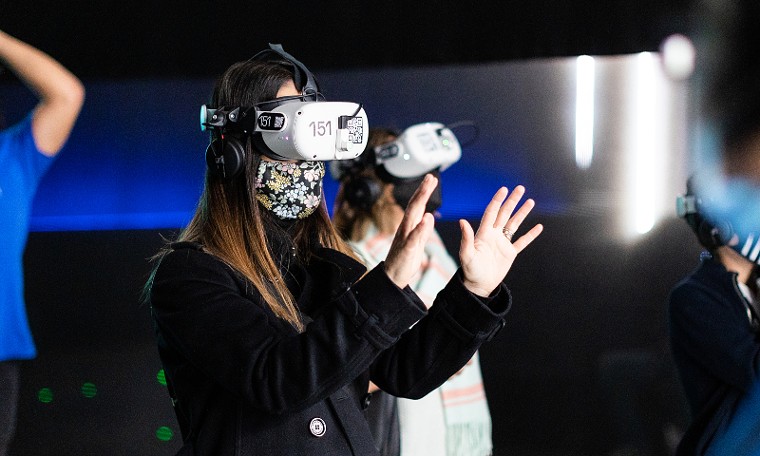 Slip the goggles on for a trip to the fantastic International Space Station.
Photo by Melissa Taylor
THE INFINITE includes footage from the first-ever cinematic spacewalk captured in 3D, 360° virtual reality shot outside the space station on September 12, 2021, in addition to offering visitors a self-directed experience aboard the space station itself. Throughout the 60-minute journey, visitors’ senses will be enriched through the interactivity between physical objects, virtual reality, multimedia art, soundscapes, light design, and even the subtle scents of a forest – evoking memories of stargazing while lying on the grass.

The experience itself starts with a "ride" on an elevator that takes you up to a space ship, and then you are geared up with goggles, complete with audio sets, that give a truly unique experience. Then, when you're ready, guides lead you to a room where you are free to explore on your own terms.

Clumsy folks like myself should worry not. Sensors embedded within the goggles prevent you from bumping into other attendees or walls...although it might at first feel like you're living in "Clarice Versus Buffalo Bill: Space Orbit Edition" for the first few minutes due to the virtual reality aspect. Just give it a few minutes - the disorientation will pass.

And that's when the real fun begins.

The story is meant to be experienced in four parts, according to Stephane Rituit, CEO of Felix & Paul Studios. Each segment lends its own telling to the overall saga of the space station.

"The first part is all about adaptation. You go through different phases of adaptation and different testimonies. The second one is about the progress of science. The third phase is more about unity. And the fourth part is about the future of space exploration," he says.

It's got gidgets and gazmos a'plenty. Look to your left, and there's a watch floating in zero gravity that you can brush away with your hand. Step to the right, and you accidentally leave the virtual walls of the space station and are floating just outside of it.

The Infinite will take you on a trip to the International Space Station. No billionaires required.
Photo by Melissa Taylor
It's an adventurer's dream come true.

While guests are exploring the virtual world, they'll come across small, glowing orbs. By physically passing into the orb, it activates the goggles and speakers to deliver accounts of what the astronauts experience. There are stories of life in zero gravity and the fun that it can bring, the quest for furthering science and exploration, and an overall understanding that Earth is not a place of boundaries but rather that we are all part of the human race.

Albert added, "I think one important element is the human aspect of space exploration. When you look at Earth from a distance, there's this thing called the 'overview effect,' which the astronauts describe as a tremendous feeling of sentiment. So if we can get people to feel that, we will be pretty happy with that."

The "overview effect" might be a new term to some, so a quick Wikipedia search describes it as such: "The overview effect is a cognitive shift in awareness reported by some astronauts during spaceflight, often while viewing the Earth from outer space. It is the experience of seeing first-hand the reality of the Earth in space, which is immediately understood to be a tiny, fragile ball of life, 'hanging in the void,' shielded and nourished by a paper-thin atmosphere. The effect may also invoke a sense of transcendence and connection with humanity as a whole, from which national borders appear petty."

When taking a trip through THE INFINITE, the overview effect is undeniable, just as much as the limitless opportunities to learn and discover.

The layout of the experience offers more than 60 orbs to activate, which can't be accomplished within just one trip. Anyone can go their first time and have one experience, and return the next time to have a completely new experience by activating a different set of orbs.

The imagination is the only limit with The Infinite.
Photo by Melissa Taylor
And just when you think you've seen it all, THE INFINITE holds an encore with The Universe within the Universe, created by Ryoji Ikeda, with support from Norimichi Hirakawa, Ryo Shiraki, Tomonaga Tokuyama and commissioned by INFINITY EXPERIENCES.

In the ten minute loop, Ikeda’s audiovisual installation prompts us to question hidden facets and structures of nature, which propels watchers through an immersive journey from the microscopic to the macroscopic and beyond.

As a summation, THE INFINITE lets you experience and see as if you were right there in the space station - with no astronaut training needed. The visual quality is top notch. It's believable in the truest meaning of the word. The stories are compelling enough to bring a grown man to tears. This is virtual reality done at its best. And it's right here in Space City's own backyard. The overall experience is one that should be enjoyed if at all possible.

As for safety measures, masks are required, and goggles are sanitized after each use. Mobility impaired persons have options to participate as well. Parking is ample, but RSVPs are not. They spaces are filling up quickly, so buy tickets sooner than later if you want to enjoy this experience.


You really do have to see it to understand it, but this video might better help capture what THE INFINITE is like.
THE INFINITE is located at Silver Street Studios, 2000 Edwards. For information, ticket prices and hours of availability, visit theinfiniteexperience.world. The exhibit is slated to remain in town through mid-February.
KEEP THE HOUSTON PRESS FREE... Since we started the Houston Press, it has been defined as the free, independent voice of Houston, and we'd like to keep it that way. With local media under siege, it's more important than ever for us to rally support behind funding our local journalism. You can help by participating in our "I Support" program, allowing us to keep offering readers access to our incisive coverage of local news, food and culture with no paywalls.
Make a one-time donation today for as little as $1.