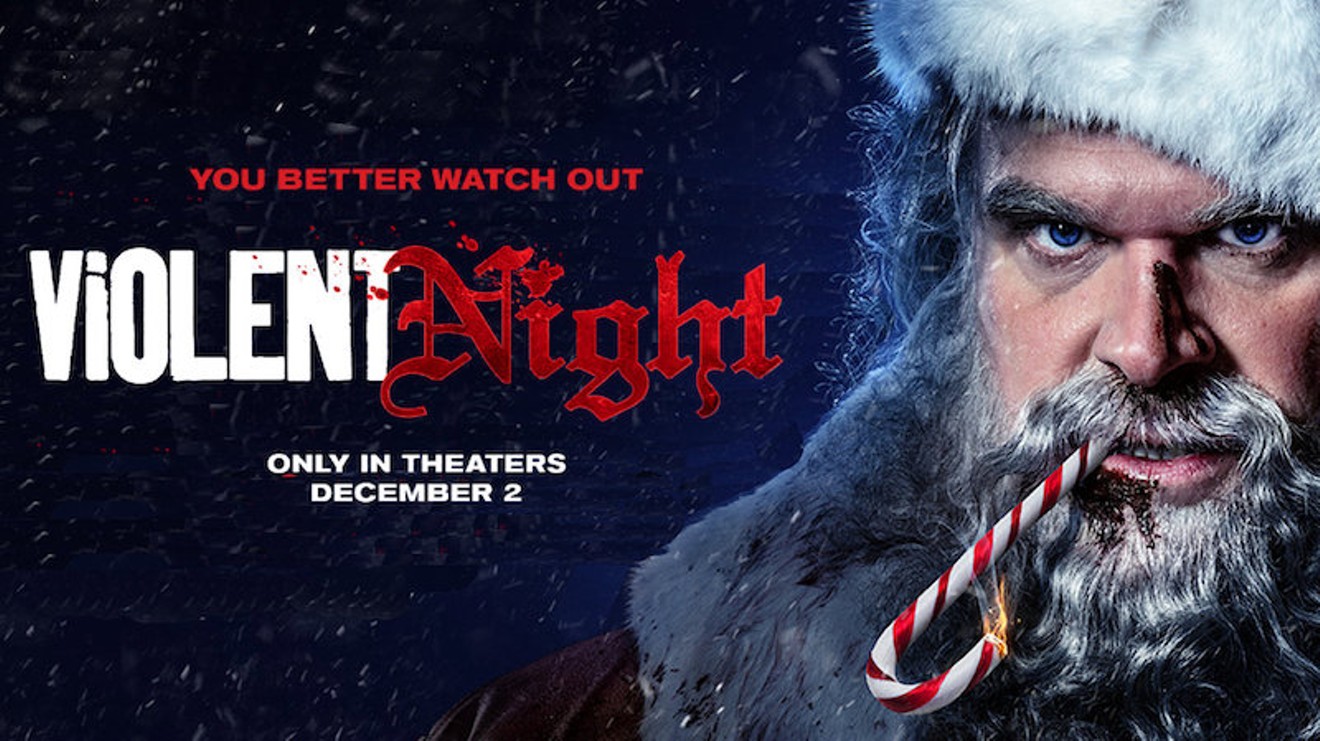 Describe This Movie In One A Night at the Opera Quote:


OTIS B. DRIFTWOOD: It's all right, that's in every contract. That's what they call a sanity clause.
FIORELLO: You can't fool me! There ain't no Sanity Claus!

Brief Plot Synopsis: Up on the housetop, reindeer pause/Santa now has probable cause.

Rating Using Random Objects Relevant To The Film: 4 Yukon Corneliones out of 5.

Not So Brief Plot Synopsis: Santa Claus (David Harbour) is at a crossroads. Fed up with the greed and thoughtlessness of modern society, he's dangerously close to calling it quits. While delivering presents at stately Lightstone Manor, he stumbles upon a heist in progress that drives off his reindeer. That's good news for young Trudy Lightstone (Leah Brady), who's visiting Grandma (Beverly D'Angelo) with her separated parents (Alex Hassell, Alexis Louder). Bad news for "Mr. Scrooge" (John Leguizamo) and his fellow crooks, who now have to deal with a not so jolly old elf.
"Critical" Analysis: Cinematically, the concept of an "evil Santa" is relatively recent (as in the last 40 years, spare me the generational nitpicking). And even then, the corrupt Kris Kringle in question is often just a dude. The killer Santa in Silent Night, Deadly Night? A guy traumatized by seeing a robber dressed as Santa kill his parents. Another childhood incident (watching mom get busy with a Santa-costumed dad) is the catalyst for the killer in Christmas Evil.

Even the kid stomping one in A Christmas Story, the drunk one in Miracle on 34th Street, and the bad Santa in ... Bad Santa are merely flawed men. And if you do get an actual murderous Saint Nick, he's either a robot (Futurama) or the spawn of Satan (Santa's Slay).

What we have in Violent Night is indeed the real Santa Claus, and he's not "bad" so much as he is able to summon upon a certain skillset from his previous life to administer brutal justice to those on his naughty list.

Fans of Christmas movies will have a lot to chew on here. Director Tommy Wirkola (Dead Snow) sprinkles references both overt (Home Alone) and subtle (The Ref) throughout. Perhaps no holiday franchise gets as good a workout as Die Hard however, from the lone "monkey in the wrench" mucking up the heist to specific callouts to the wintry second movie. And that's without getting to Under Siege, Lethal Weapon 2, and a few others.

Mr. Scrooge tries to convince Santa the live-action Spawn movie was good.
Universal Pictures
But the clearest influence on Violent Night are previous movies from production company 87North like Nobody and Bullet Train, as well as producer David Leitch's John Wick films. It's safe to say you're not going to see a Christmas movie this bloody on the Hallmark Channel, at least, not without digging up the rumored NC-17 cut of Love Actually.

[That's the one where the bar Colin visits turns out to be the Titty Twister in From Dusk Till Dawn.]

Amidst all the scenery chewing, there's nobody having as good a time as Harbour. His Santa is John McClane by way of The Northman, but it's the little things he brings to the part, like his reactions to a constantly expanding Naughty List or his relationship with the reindeer, that really stand out. Yet he still provides emotional weight to the unexpected redemption story. And his relationship with young Trudy is surprisingly touching, given the framework around it.

The emotional component indeed may be the most refreshing thing about Violent Night. Yes, Santa murders dozens, and Trudy's extended family is a hilariously vulgar shitshow, but at its heart, this is a movie about believing in the unbelievable, and how (almost) no one is beyond saving. It's a great new entry into the holiday family film library.

Provided yours is also the kind of family that listens to murder podcasts together.

Violent Night is in theaters today.
KEEP THE HOUSTON PRESS FREE... Since we started the Houston Press, it has been defined as the free, independent voice of Houston, and we'd like to keep it that way. With local media under siege, it's more important than ever for us to rally support behind funding our local journalism. You can help by participating in our "I Support" program, allowing us to keep offering readers access to our incisive coverage of local news, food and culture with no paywalls.
Make a one-time donation today for as little as $1.