The Race to Save the Romanovs and How It Fell Apart

Public Domain/St. Martin's Press
The former Tsar Nicholas II after his abdication, now under house arrest, with Alexandra in the Alexander Park at Tsarkoe Selo, Spring 1917.
The Race to Save the Romanovs: The Truth Behind the Secret Plans to Rescue the Russian Imperial Family
By Helen Rappaport
400 pp.
$28.99
St. Martin’s Press

This month marks the 100th anniversary of one of the most notorious and shocking political-related killings of all time. That’s when Tsar Nicholas II of Russia – who abdicated after the Bolshevik Revolution – was marched down the steps of their home prison, across a yard, and to a dirty basement and shot. Also shot and stabbed to death in a blaze of bullets and bayonets were his wife, the Tsarina Alexandra, their five teen and pre-teen children, and four staff members while they chaotically screamed for their lives and tried to escape. And no, conspiracy theorists, Princess Anastasia did not escape. 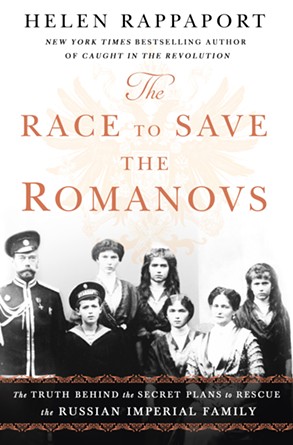 Book cover
But don’t call it an assassination or execution, says, author
Rappaport, a Romanov expert who has penned several previous books on the family. This was nothing short of an “ugly, crazed and botched murder.” One that perhaps could have been prevented, save for a series of bizarre and unfortunate political, familial, and postal mishaps.

With the detail of a historian-detective, Rappaport utilizes historical, uncovered, and recently declassified information to pick apart the myriad of theories and plans to “save” the doomed Romanovs by getting them out of the country. Plans range from the unsubstantiated (documents and identities lost to time) to the fantastical.

One which was apparently given serious consideration involved training a rescuer as a barber, having him come in and shave off Nicholas’ trademark beard, then having the Tsar put on a military uniform to sneak out while the barber donned a fake beard to stay behind and pose as Nicholas!

Shady characters, tense rivalries, and shifting loyalties abound in the narrative. But it’s also tied into the complicated family trees of European and Russian leaders that often found the branches hopelessly intertwined.

If this book does one thing, it is to dissolve the prevailing theory that the British King George V either ignored or refused to aid his first (and lookalike) cousin Nicholas. When in fact Rappaport notes decisions like that were not always firmly in his hand, and especially since England wanted desperately not to anger the new Russian government to keep them as an ally in the very much ongoing World War I. Though much of the populace were not fans of either the Romanovs or having them in England.

The 23 steps to a basement at the Ipatiev House in Ekaterinburg, Russian. This is where Nicholas II, along with his wife, children, and staff, were marched down, crossed a yard, and taken to a basement room and murdered . There were a total of 11 killings.
Public domain/Courtesy of St. Martin's Press
Royal cousins and heads of Sweden, Spain, France, and even war enemy Germany – via a sympathetic Kaiser Wilhelm – could not (or would not) act decisively. And Nicholas may have helped doom himself with a reluctance to leave Russia, holding out hope that monarchists would put him back in power.

What was clear as time passed was that the more level-headed new Provisional Government of his country was quickly being superceded in position and power by the more militaristic (and Romanov-hating) Soviet Petrograd of radical/militaristic hardcore Bolsheviks.

Adding to the storm was that Nicholas chose to ignore the growing Bolshevik uprising and feelings of his people prior to the Russian Revolution. And Alexandra was not well liked by many and seen as haughty, high-strung, and mistrustful, and a little too enamored of bizarre guru Rasputin (a whole ‘nother story). This did not help matters. Nor the fact that for whatever country that offered them asylum, the Romanovs would be political hot potatoes.

Rappaport also notes plenty of instances where telegrams and communications that could have made a difference arrived too late, were withheld, or whose intentions were not clear—something we take for granted today.

In fact, after the Romanov killings, the grisly details were kept secret and the true (or mostly true) events only known by much of the world months later. And even then, rampant rumors had Alexandra and her daughters escaping, which led to the Anastasia theories long since debunked. Aiding this confusion was that the bodies were all burned and/or scattered about in burial spots, the final ones not even discovered until recent years.

In the end – and to this day – a lot of finger pointing and blame laying is passionately debated by historians around the world. And Rappaport’s detailed (if somewhat dryly written) piece of investigative history expands the cast of characters and storylines. But ultimately, she lays the “blame” for not saving the Romanovs – even when it seemed highly possible – at no single person’s door.
California Privacy Policy California Collection Notice
Do Not Sell My Info
Use of this website constitutes acceptance of our terms of use, our cookies policy, and our privacy policy The Houston Press may earn a portion of sales from products & services purchased through links on our site from our affiliate partners. ©2022 Houston Press, LP. All rights reserved.