Club Soda No Twist: Mocktails for a Cause Photo by Lorretta Ruggiero
These birds of a feather flock together alcohol-free.

The mocktail trend is experiencing a boom across the United States with more and more non-alcoholic bars and bottle shops opening to cater to customers who are sober, teetotalers or just looking to cut back on alcohol consumption. Many bars and restaurants in Houston have added non-alcoholic drinks to their menus with much success.

This week the Houston Recovery Center and Davis Holdings hosted an alcohol-free happy hour at 1500 McGowen with some of Houston's local bars competing for the best non-alcoholic beverage in a contest hosted by Sipple, Houston's first alcohol-free bottle shop. The event included live music from jazz artist Lloyd Hughes and DJ Yunginet plus an art show with works from artist Charles Washington, presented by the Harambee Art Gallery. Charles Washington stands with some of his art pieces.
Photo by Dylan McEwan
The evening was blessed with no rain, though the earlier showers had cooled the city down a bit. Guests mingled inside and out, enjoying the buffet bites from Trendy Dumpling, Chick-Fil-A, Cowboys and Indians Tex-In Kitchen and an array of petite desserts from Rustika Cafe. Also on hand to dish out delicious food was Thomas Stacy of the tasting restaurant, ReikiNa, and Sasha Grumman (The Fierce Chef) of Sasha's Focaccia and a former Top Chef season 18 competitor. Stacy's table featured tuna sashimi and a coconut milk risotto topped with a spicy Tom Kha and Grumman was serving her famous focaccia topped with smoky mushrooms.

Keisha Griggs of Bocage Catering offered guests mini cups of black-eyed peas and sweet and spicy beef berbere, topped with a thin and crispy piece of plantain while Uli's Kitchen had a fried tostada loaded with snapper and mango ceviche. Sipple had several varieties of non-alcoholic wine plus a Smoky Bloody Mary.
Photo by Lorretta Ruggiero

There were nine beverage competitors from local restaurants and bars serving colorful mocktails that ranged from fruity to herbaceous. Most of them were made with non-alcoholic spirits such as Lyre's Rums or Ritual Gin. Sipple Co. was also showcasing some of its non-alcoholic wines and there was a particularly good rose from New Zealand.

The crowd checked out the art pieces, many of which were up for sale or silent auction plus a number of sports and music memorabilia, also up for auction. Proceeds from tickets (a reasonable $20) and the auction benefited the Houston Recovery Center, which provides care to underserved persons affected by substance use. Its goal is to provide early intervention and compassionate community care to aid individuals in achieving lifelong recovery.

Owen Daniels, Charles Adams and Danny Frounfelkner in the midst of judging.
Photo by Lorretta Ruggiero
And that sense of community was prevalent in the group assembled for the event. Many of the attendees seemed to know one another and there was a lot of hugging and smiling. After a couple of hours, though, it was time to get down to the business of judging. I had already tried a number of the drinks throughout the evening and found them to be wide-ranging in their flavors.

At the judges' table I was joined by Jessica McDaniel, Director of Development & Communications for Houston Recovery Center and Emma Balter, Food Editor at Chron.com. Across from me was Owen Daniels, former tight end for the Houston Texans and Super Bowl Champion with the Denver Broncos. I told him my 18-year-old son would be very jealous of me. Next to him was Charles "Big Angry" Adams, a well-known trial lawyer and radio host. At the head of the table sat Danny Frounfelkner who co-founded Sipple with wife Helenita. 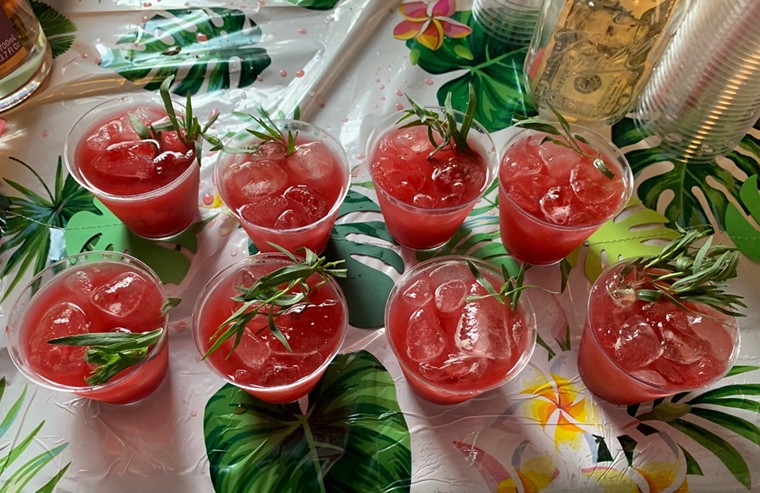 Beets meet plums for an intense flavor combination.
Photo by Lorretta Ruggiero
We were brought each beverage for competition by its creator. Tinamarie Brackett from Winnie's brought us a pretty pink drink she named Beets by TM. It was garnished with a sprig of tarragon and her description of the process was quite intense. From the labor-intensive beet-plum gastrique to the balance of acidity provided by apple cider vinegar and lemon, this was a well-thought out concoction. It didn't win first place, but it was my favorite and Brackett says it will most likely end up on the menu at Winnie's. Dan Jircik from Grand Prize Bar and Angel Salas from Johnny's Gold Brick are up for some friendly competition.
Photo by Lorretta Ruggiero
Next up was Devin Jason's Lucid Dreams from Loft 18 restaurant. It was a blueberry mint take on a John Daly and got its vibrant purple hue from butterfly pea flower. In the end, it was the People's Choice. The judges' winner was Angel Salas' Paleta de Sandia made with Ritual tequila alternative, watermelon, lime and soda. Salas, bartender at Johnny's Gold Brick, was inspired by the Mexican chili-covered watermelon lollipops of her youth and the drink was rimmed with Tajin and served with a tiny triangle of melon. It was the perfect refreshment for a hot Houston evening and was also my daughter's favorite. 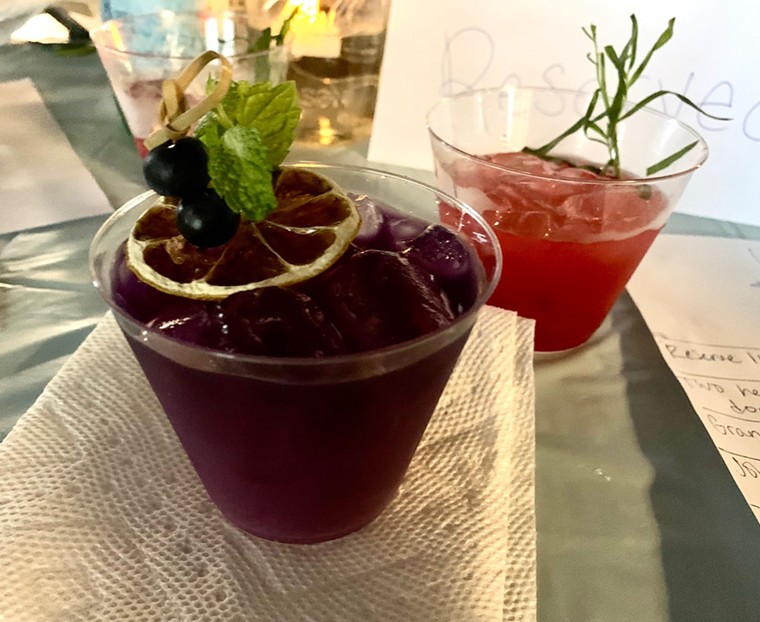 The Lucid Dreams from Loft 18 won the people's hearts.
Photo by Lorretta Ruggiero
Although there can only be one choice each for the judges and the people, there were other standouts as well. I really liked the Birds of a Feather from Josh Alden at Reserve 101. It featured two types of non-alcoholic Lyre's Cane, both dark and spiced plus Dhos aperitivo, an alcohol-free spirit. It also had balsamic vinegar and strawberry plus a topping of Jarritos pineapple soda for bubbles. Lindsay Rae Burleson of Two Headed Dog served us a more savory mocktail called Heavy Metal Pool Party while the Velveteen Touch from Grand Prize Bar offered a citrus-forward drink of apricot, nance fruit and lime. We were also served a simple watermelon agua fresca from 93' Til with a tasty garnish of pickled watermelon rind, courtesy of Tim Vaughan.

The Bonita Senorita from Uli's Kitchen owner David Ulises was beautifully presented, but unfortunately, by the time it was served to us, the ice had watered it down and the fresh flavors of Ritual Gin alternative, fresh hibiscus reduction, strawberry puree and lime were barely perceptible. Lastly, we received an entry from Cadenza Coffee Co. that seemed to be coffee-based, but oddly, tasted very strongly of alcohol despite being non-alcoholic. It was garnished with star anise, but the creator was not there so we weren't really sure what we were drinking. Sasha Grumman and Thomas Stacy share their stories with guests.
Photo by Lorretta Ruggiero
During the tasting, Stacy and Grumman were introduced to give their emotional stories of their paths to sobriety. Each had a different experience but with some commonalities. For many restaurant industry professionals, there seems to be a culture of working hard and playing hard. Stacy's journey played out more in public with six different arrests while Grumman admitted that her addiction was more secret. Both chefs revealed that it was the inspiration of fellow chefs and the support of the restaurant community and their friends that helped propel them forward, with their dreams being more substantive than alcohol or other drugs. 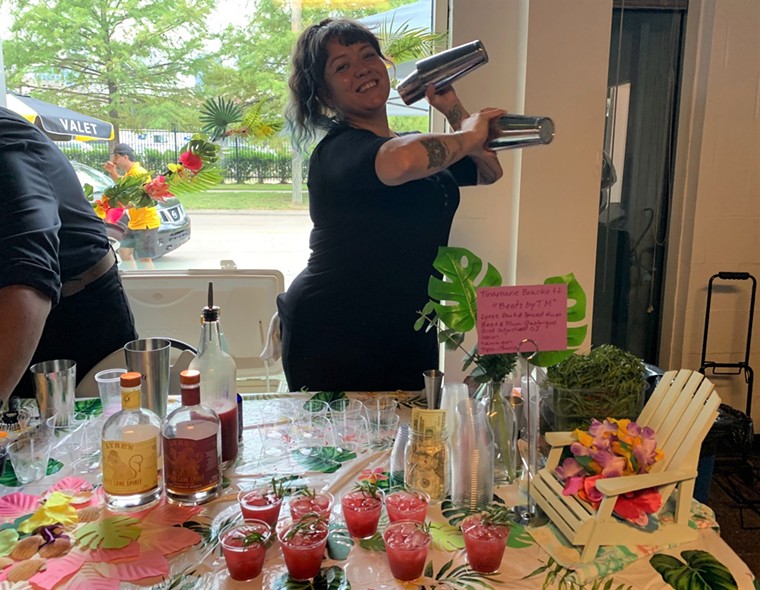 Tinamarie Brackett shakes it up.
Photo by Lorretta Ruggiero
Toward the end of the evening, attendees were asked if they thought that the Club Soda No Twist happy hour should be a regular thing and the crowd roared its approval. And many of the bartenders told us that the mocktails we sampled would probably make their way onto the menus at their establishments. There was an amazing amount of creativity and thought put into the non-alcoholic drinks. Anyone and everyone could enjoy them and not miss out on the taste of celebration. Add in some art, jazz and happy people and it was a perfect cocktail of fun.
California Privacy Policy California Collection Notice
Do Not Sell My Info
Use of this website constitutes acceptance of our terms of use, our cookies policy, and our privacy policy The Houston Press may earn a portion of sales from products & services purchased through links on our site from our affiliate partners. ©2022 Houston Press, LP. All rights reserved.