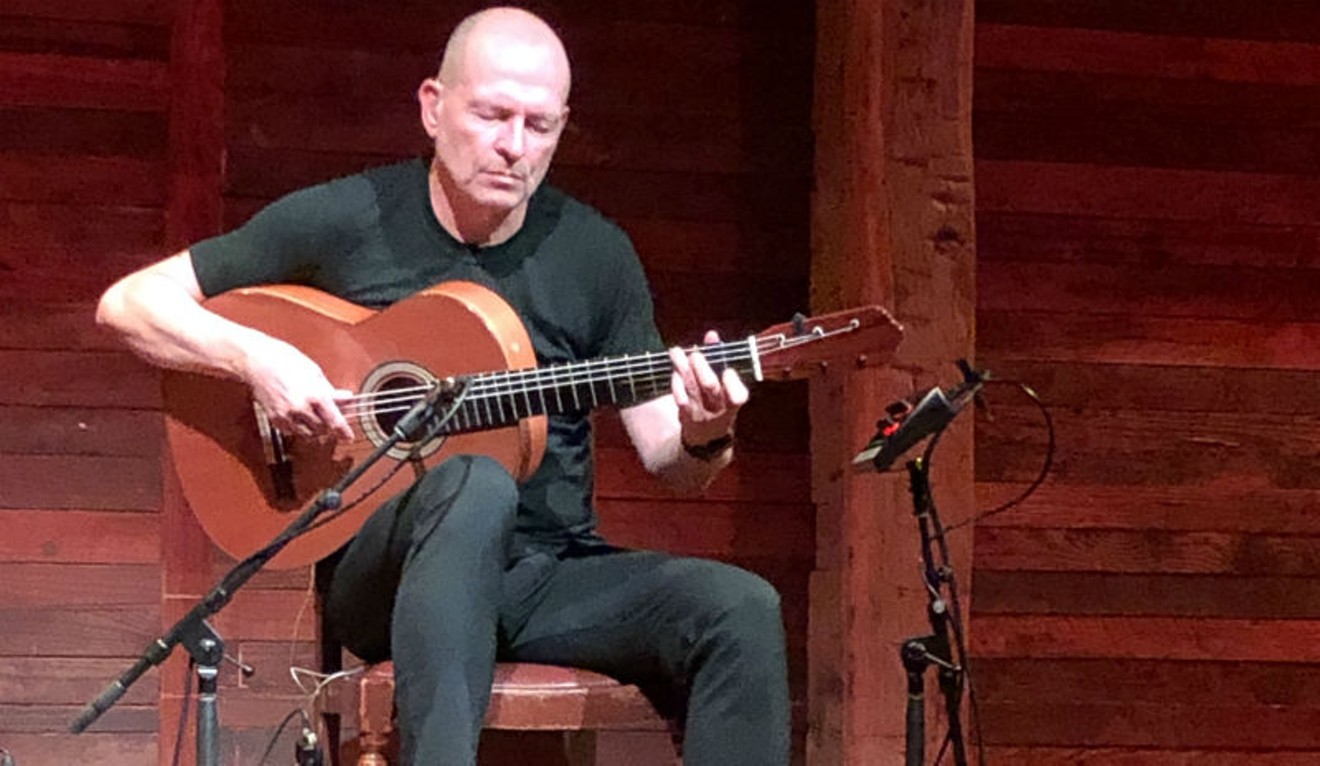 Ottmar Liebert and his self-title Nouveau Flamenco style of playing.
Photo by Lisa Strain
Nouveau Flamenco guitar player Ottmar Liebert and his band Luna Negra came to The Woodlands Sunday night for an intimate show at Dosey Doe. The 175-year-old building originated as a tobacco barn in Kentucky and is now considered by some to be acoustically “perfect”, as its 300-600 year old oak and birch beams absorb and reflect sound beautifully.

It was the perfect setting to host the three-piece Luna Negra. They played on a minimalist stage and allowed the ambiance of the historic building to set the tone. Their instruments, set atop a few Persian rugs, seemed cozy especially when Liebert, who is not only a musicians but an avid photographer and ordained Zen monk, removed his shoes to play an entirely barefoot set.

Born in Cologne, Germany in 1959, Liebert began playing guitar at age 11. He discovered flamenco at the age of 14 when he purchased an LP from the local grocery store. Having traveled extensively across Asia and even playing in a rock band in Boston, he was exposed to many musical styles before he planted his roots in Santa Fe, New Mexico and developed his signature style which he coins: Nouvea Flamenco.

Liebert has sparked some criticism for this term as flamenco dates back to the 1700s and purists adhere strictly to the melodies and Palos of traditional Romani origins. One such critic was esteemed flamenco guitar player, Paco de Lucia, whom Liebert cites as one of his greatest influences. But with influences also stemming from the likes of Carlos Santana, Miles Davis, and Jeff Beck it becomes more clear how an artist like Liebert would appeal to broader audiences. Broad enough to have earned him five Grammy nominations.

Liebert and Luna Negra opened their 13-song set Sunday night with the exotic yet subtle, “Morning Arrival in Goa.” The next couple of numbers seemed to carry the mind, quite literally away to dreamscapes of Arabian Nights melted beautifully with Romani-esque flamenco melodies and strumming.

As the music rolled on, it transitioned to another part of the world where reggae rules and Bob Marley is King. Again, Liebert attached his signature style to every number so even songs like “Jamming” and “Waiting in Vain” were not instantly recognizable.

Bass player, Jon Gagan shone brighter than ever on these songs. The only constant member of Luna Negra other than Liebert, Gagan has performed and recorded with the guitar player for more than 26 years, executing effortless licks on his fretless Lakland bass.

Subtle, moody picking commenced after the applause before erupting into the upbeat strumming of popular number, “Snakecharmer,” just made for dancing — but without a dance floor, that wasn't possible at Dosey Doe.  Drummer Chris Steele, a Luna Negra staple of the last five years, showcased his skills toward the end of the song and melted right into a drum solo that was part jazz, part rock and roll, and part street corner bucket slapping. Liebert joked that at one time “Snakecharmer” was a two and a half minute song that has picked up so much fuzz along the way it has become a hairball.

The evening continued to roll along its varied path with new age world music numbers like “Ocean Blvd. Miami” “Full Moon Beachwalk” and the melt your heart smooth “Shadow.” Luna Negra concluded their show with the ever popular “Barcelona Nights” much to the audience's enthusiastic approval.

The guys took everyone on a journey around the world and back and Ottmar Liebert proved why he is considered one of the best world music guitar players alive today. If you are feeling the hectic pressures of the world today, we suggest that you pick up the original best selling 1989 album, Nouveau Flamenco, or give a listen to Ottmar’s 2015 solo effort appropriately titled, Slow.


Setlist:
Morning Arrival in Goa
Sand (Apophenia)
Horse
Waiting in Vain
Jamming
Snakecharmer
Drum solo
Butterfly Dream
Ocean Blvd. Miami
Fullmoonbeachwalk
Could You Be Loved
Shadow
Barcelona Nights
KEEP THE HOUSTON PRESS FREE... Since we started the Houston Press, it has been defined as the free, independent voice of Houston, and we'd like to keep it that way. With local media under siege, it's more important than ever for us to rally support behind funding our local journalism. You can help by participating in our "I Support" program, allowing us to keep offering readers access to our incisive coverage of local news, food and culture with no paywalls.
Make a one-time donation today for as little as $1.