The Who Hits Back Against Its "Texas Jinx" 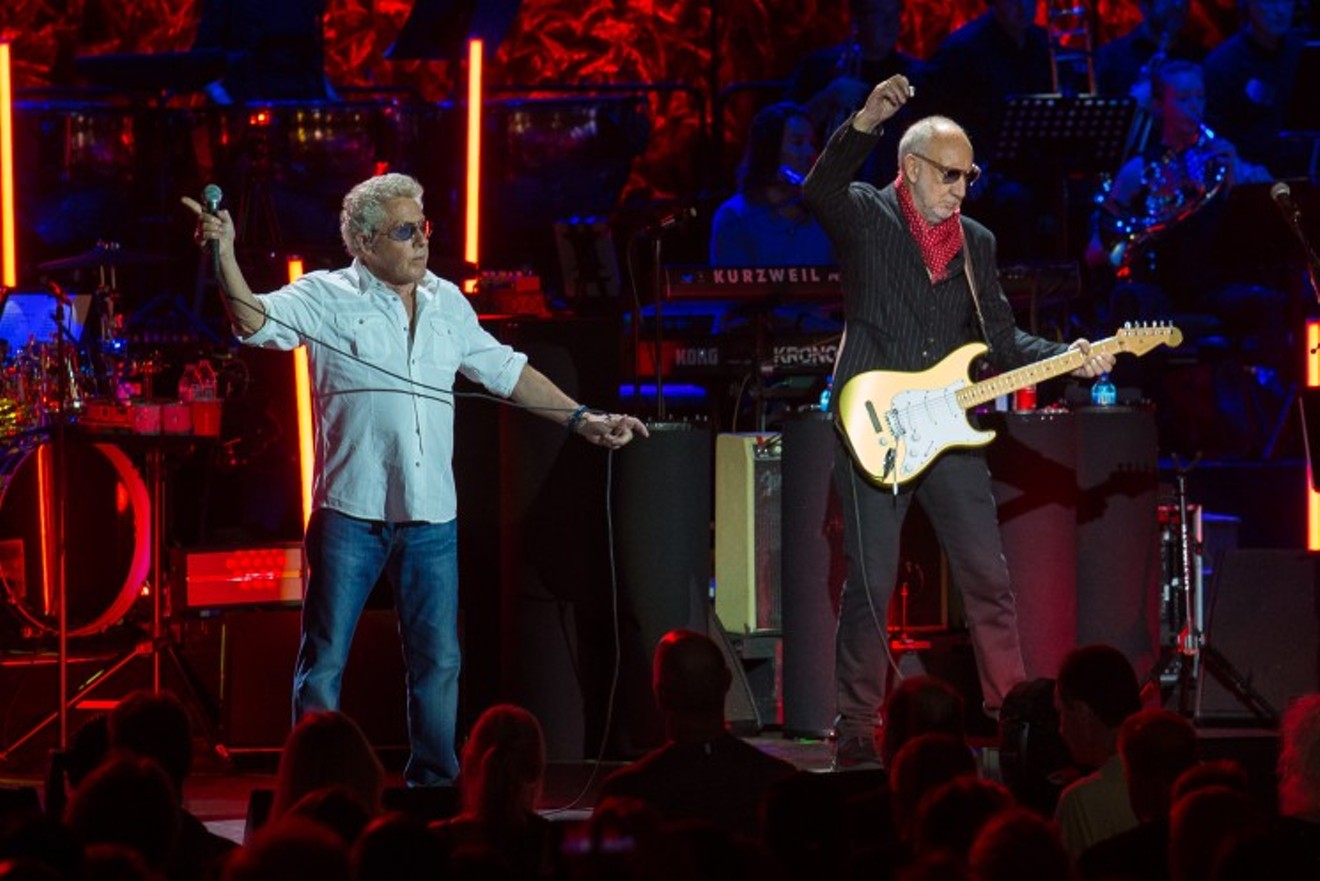 The Who Photo by Eric Sauseda
A video segment near the end of The Who’s set Sunday night at Cynthia Woods Mitchell Pavilion mimicked how time can pass in the blink of an eye. The collage pieced clips of the band’s time together with a news reel threading the turmoil of the 1960s to the turmoil of today. One moment we were in Vietnam, the next it was 9/11. Images of lost rock heroes like John Lennon, Joe Strummer and The Who’s own Keith Moon and John Entwistle came and went. Set to “The Rock” from Quadrophenia and with the power of a full orchestra behind the band, it was a moving tribute to The Who and everyone in the audience who’s also “hit back” against the times.

The concert was a pretty good example of how we and The Who have all done that — with resilience, a healthy sense of humor, good friends and the music of our lives. The band’s last tour through town was an abbreviated set, just eight songs at Toyota Center before the city’s pollen count put vocalist Roger Daltrey down for the count. Many in the crowd last night returned to finish that interrupted evening, which was only mentioned once, at the end of the night by Daltrey, after The Who had delivered a full and riveting set. 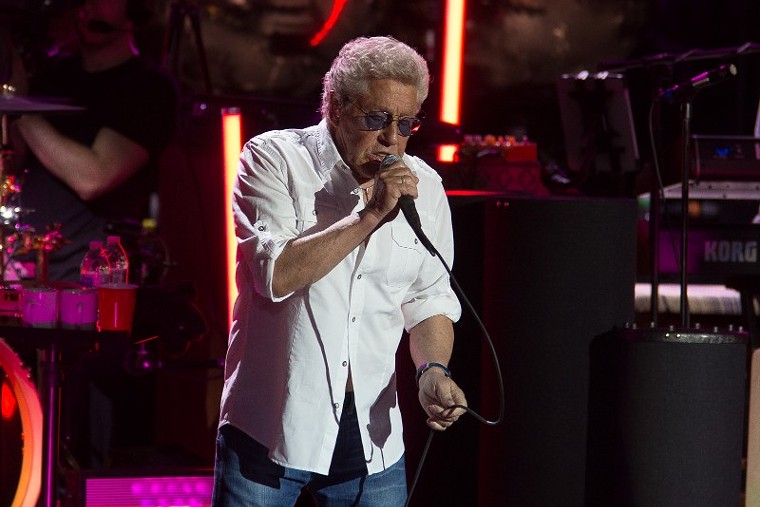 Not that there weren’t missteps, but those stumbles were merely taken in stride. Townshend had to restart “Amazing Journey,” when he flubbed it, allegedly because someone in the audience called him “Peter.”

Daltrey and Townshend were in good spirits, chatting and joking generously with one another and the crowd throughout the night, perhaps buoyed by the strength of their set and sidestepping the bad luck that plagued the band’s last visit. After all, they were playing an outdoor show in the woods during allergy season in Houston. They maybe didn’t know just how close the show was to yet another unfortunate interruption. Getting beers at the concession during "Amazing Journey" we were told that a neighboring community had suddenly lost power and the Pavilion was on high alert in case there was a sudden outage of electricity.

Thankfully, that never occurred and The Who provided plenty of energy throughout its set. Daltrey particularly sounded incredible, giving us LP-cloned versions of crowd-pleasers like “You Better You Bet,” “Bargain,” and showstopper “Love, Reign O’er Me.” That was the penultimate song of the set and his vocals got stronger throughout the evening so he let loose to the delight of the audience.

Pete Townsend cranks up the windmill
Photo by Eric Sauseda
All that good momentum led to light spirits on stage, good-natured banter with Townshend jokingly calling us all “twats” at one point and some other completely off-the-cuff remarks. A few songs in, Daltrey’s remarkable physique was drenched in sweat.

“Is it always this hot in Texas?” he asked. “I mean, I’ve had some hot nights in Texas but this, in the beginning of May, is ridiculous. The birth rate must be extremely low or the air conditioning really high”

Townshend, who was wearing a scarf and a jacket with no shirt beneath quipped, “I’m freezing.”

Speaking of the band, it was exceptional. This tour featured Townshend’s brother Simon as guitarist and background vocalist, bassist Jon Button and Zak Starkey on drums, accompanied by a pair of keyboardists, Loren Gold and Emily Marshall. Townshend introduced Katie Jacoby who shredded violin parts on “Baba O’Riley” and “Behind Blue Eyes” and the 48-piece orchestra — a different one in every city of the tour - was conducted by Keith Levenson.

“We’re so lucky to be touring with various, different musicians and the orchestras who come out and do a full day’s work before we do a concert. They arrive at one (o'clock) to rehearse the show so they must be leaving home at nine or ten in the morning and getting here and having a very full day,” Townshend explained. “This is a magnificent orchestra, they’re local musicians. Houston, as you know, has several famous orchestras including its famous symphony orchestra. Please give them a big hand, they’re your people.” 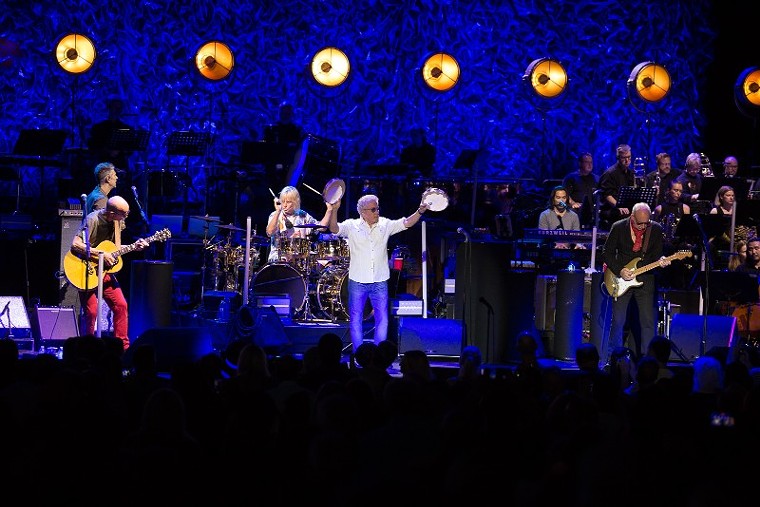 The Who, backed by our people
Photo by Eric Sauseda

Ahead of “Eminence Front,” a song Townshend sings, he said he’d be croaking his way through it (though, honestly, he sounded excellent on it and on featured vocals for “Bargain” and “I’m One”). He promised his vocals for “Eminence Front” would be “like jazz, it’s what I grew up with. My dad was a jazz man and I was a young jazz baby. And then this filthy, filthy evil thing called rock and roll came along and that was just the end of it for my dad and for jazz. It was a tragedy. But good for me.”

We all joined in on the laugh because Townshend’s good fortune has been ours too, the beneficiaries of so many great songs showcased last night. He joked about staying onstage until he dropped dead on one and how we “fuckers” would all hope we had a ticket for that particular show. We’ll keep coming to the shows because The Who still rips — Townshend saved some of his best work of the night for the end, shredding on “5:15” and “The Rock.” And, the times still need The Who’s music, too. That was apparent when the crowd roared as Ukranian President Volodymyr Zelenskiy’s image was shown on screen during “Join Together.”

At the end of the set, once “Baba O’Riley” came to its frenetic, stirring end, Daltrey told the crowd that they’d probably seen their last Who set in Houston. But who knows? He wished us luck and imparted a final bit of resilience.

“Thank you so much for coming. We always have problems in Texas. For some reason, it’s been a jinxed state to us,” Daltrey said. “But, we’ll get there. We ain’t giving up, don’t you give up.” 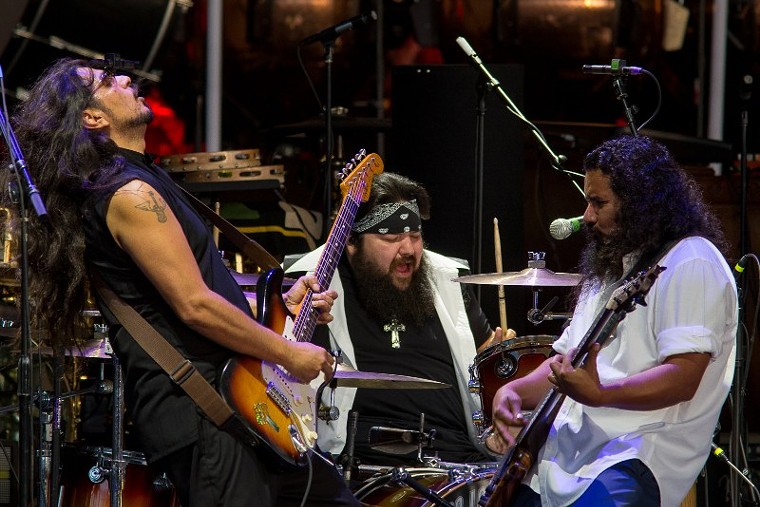 Los Lonely Boys
Photo by Eric Sauseda
The Opener: Texas’s own Los Lonely Boys threw down a five-song set to start the night right and shared how honored they were to open for The Who. The trio of Garza brothers offered a set reflective of that honor, opening with the aptly-titled “Crazy Dream” and featuring a jam version of Spencer Davis Group’s “I’m a Man.” On that one, bassist Jojo strummed the bass parts out on guitarist Henry’s guitar while he played the guitar parts, with drummer Ringo flailing away as if this performance style is routine. They ended with a sing-along of their biggest hit, "Heaven" and their set was a lot of fun, though their repeated call of “Are you happy to be alive?!” to a crowd of septuagenarians felt a little loaded.

Personal Bias: One of the best lines ever written in a rock song is “Meet the new boss, same as the old boss.” I love that so much. But really, I’m a “Pinball Wizard” guy and a Who fan from the time my mom took me and my brother to the Loew’s Delman theater across the street from the old Sears store in Midtown to see Tommy. I was 10 years old and already hooked on rock. The film cemented me as a fan, one who finally got to see a complete, proper Who set last night. Absolutely worth the wait.

Random Notebook Dump: I spent two nights this weekend at CWMP — enjoying Miranda Lambert and Little Big Town on Friday and then The Who last night — and stayed on a bit after each show in the climate-controlled confines of the Pavilion Lounge to make notes. Each night when I left, I noticed crews of dozens of workers arriving to the site to do the thankless job of cleaning up after thousands of music fans. This one’s a shout out to those crews for doing that dead-of-night work and ensuring that the next show at the Pavilion (Dave Matthews Band, May 13, in case you’re interested) is all set for music lovers. 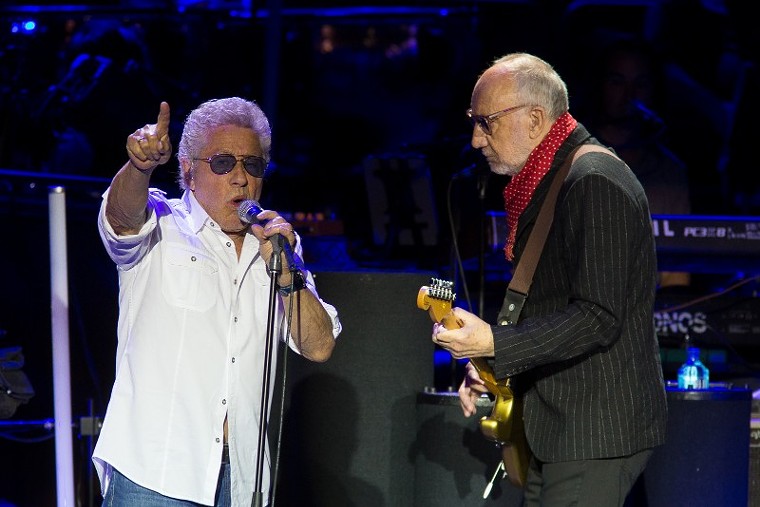 Crazy Dream
Nobody Else
Rockpango
I’m a Man
Heaven

Overture
1921
Amazing Journey
Sparks
Pinball Wizard
We’re Not Gonna Take It
Who Are You
Eminence Front
Ball and Chain
Join Together
The Seeker
You Better You Bet
Bargain
Won’t Get Fooled Again
Behind Blue Eyes
The Real Me
I’m One
5:15
The Rock
Love, Reign O’er Me
Baba O’Riley
KEEP THE HOUSTON PRESS FREE... Since we started the Houston Press, it has been defined as the free, independent voice of Houston, and we'd like to keep it that way. With local media under siege, it's more important than ever for us to rally support behind funding our local journalism. You can help by participating in our "I Support" program, allowing us to keep offering readers access to our incisive coverage of local news, food and culture with no paywalls.
Make a one-time donation today for as little as $1.