Soundtrack for a Scandal: Six Songs for the Houston Astros’ Sign Stealing Mess 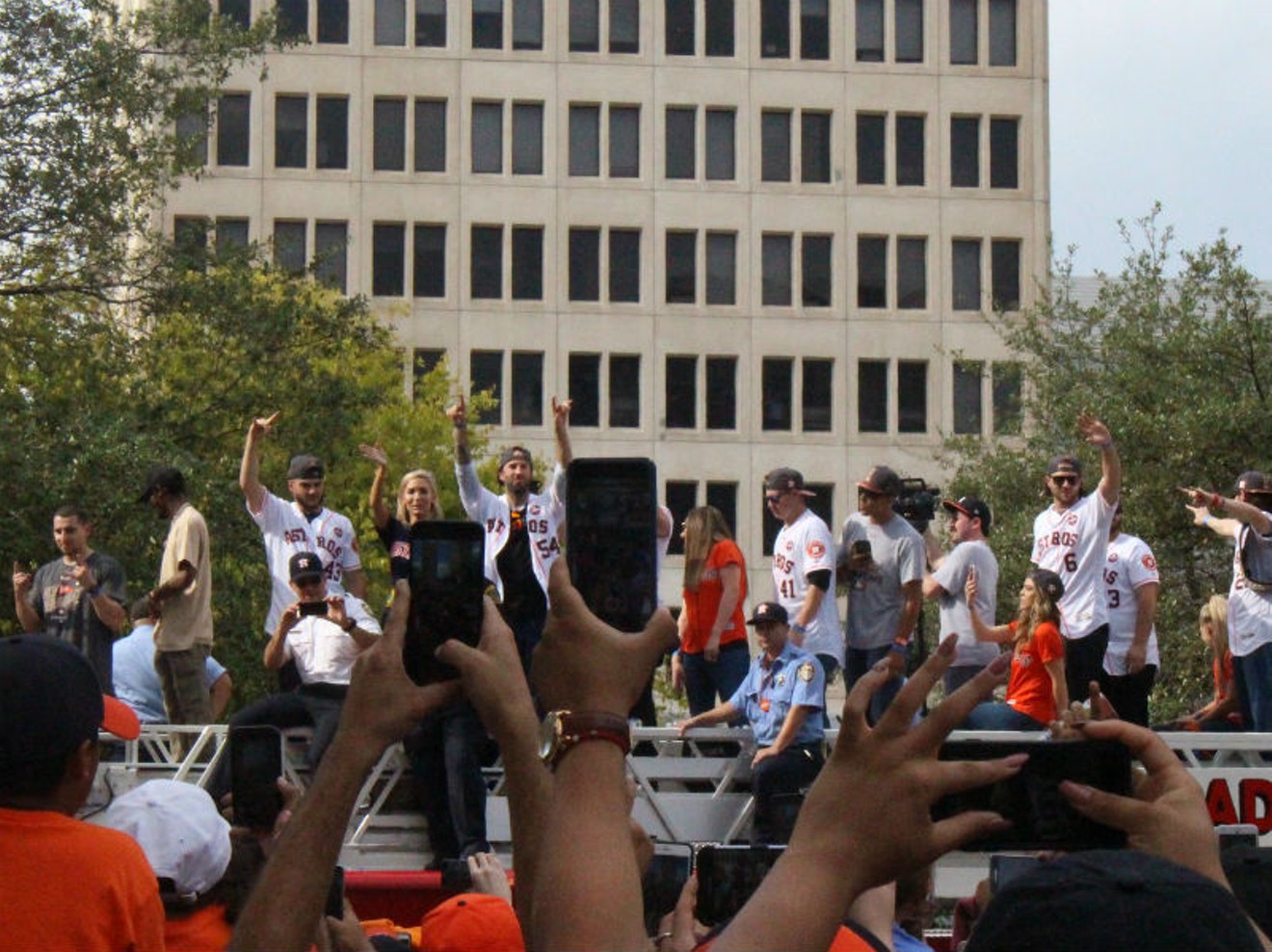 Houston Astros - including whistleblower Mike Fiers (No. 54) - celebrated a World Series win with fans in 2017. Photo by Jesse Sendejas Jr.

We’re now into the second week of fallout from the biggest scandal to ever rock Houston sports, the shame that is the Houston Astros’ sign stealing fiasco. Baseball fan or not, virtually everyone in this city by now knows the hometown heroes were knocked down a few pegs following an investigation by Major League Baseball which proved the organization’s players and some executives went to extraordinary lengths to steal and relay opposing teams’ signs. A detailed report outlined how cameras and trash cans were used to telegraph the stolen signs to Astros batters during games.

Last week, MLB levied its punishments against the team. General manager Jeff Luhnow and manager A.J. Hinch were suspended from the game for a year. Team owner Jim Crane then fired both men. The trickle-down of these shenanigans affected teams in Boston and New York, too, where managers Alex Cora (Red Sox) and Carlos Beltran (Mets) also lost their jobs. Both were members of the Astros squad which won the World Series in 2017, the first and only championship title in franchise history.

Some Astros fans have been dismayed and disappointed by these revelations. Others have defended the team. No matter which side of the divide you’re on, there’s no doubt the story is compelling and fraught with enough intrigue to fill a David Fincher film. Like Gone Girl, but with trashcan-banging dudes in uniforms. We’d peg Fincher (Fight Club, Seven, Zodiac, The Girl With the Dragon Tattoo) to direct the big screen story of a team which gave hope to a city recovering from the ravages of a natural disaster, all the while surreptitiously using technology and garbage cans for an over-the-line competitive advantage.

A gripping film will need the right music. Here are some selections to soundtrack the scandal:

As news of the scandal began to surface, die-hard fans may have found themselves humming one of the best rock songs of the 1990s. Although the song, as penned by Weezer’s Rivers Cuomo, is about alcoholism and the long shadow it casts over families, it has some pertinence here. In 2017, Houstonians rallied around the Astros’ playoff run and the team stood as a beacon of Houston pride for people who had lost everything to Hurricane Harvey that August. The ‘Stros' resilience gave everyday folks an example to which they could aspire. Rally around one another and believe in each other was the message. There was something very familial to it all.
As fans began to hear rumors that the message was being Morse-coded on refuse receptacles all along, they had to grapple with the possibility that the team was addicted to winning at all costs. Like a drunk who will risk it all for a drink, perhaps they needed a winning fix and they’d bend the rules to get it. Wanting to believe the team won it all without an unfair edge, we’ve found ourselves singing the title line of this 1994 track.

“I saw the sign and it opened up my eyes, I saw the sign.” That’s the main lyric to this Ace of Base track, also from the early ‘90s. Maybe this song doesn’t really fit on the soundtrack, possibly it’s better suited to the trailer for the now fictional (but probably headed for a theater near you soon) film. The whole point of stealing signs in baseball is to open the batter’s eyes for what’s coming next from the opposing pitcher. Seems appropriate here.

MLB reported that every player on the team knew of the scheme. For Astros fans, that’s as heart-wrenching as Hank Williams’ caterwauling on this country music classic. It would mean Jose Altuve - the face of baseball nice guys and someone who’s been a model for hard work, tenacity and self-confidence – might have known and benefited from the plan. (In fact, there’s some speculation about Altuve wearing a buzzer beneath his jersey to get pitch tips during the playoffs, which he has denied and MLB has debunked). It would mean George Springer’s remarkable numbers as a lead-off hitter in playoff games possibly came unfairly. It would give a weird new meaning to those home run celebrations where Alex Bregman and company posed and stared at the TV cameras, since camera use was a key part of the plot.

Lines from this Pearl Jam song about vermin include “Drink the blood of their so-called best friend” and “Don't pack themselves together and run as one.” This one’s for former Astro turned whistleblower, Mike Fiers.

Imagine being involved in a workplace scandal and then having to return to the office a few weeks later to face taunting and judgmental co-workers. Imagine that your job often puts you in other offices, work environments where you and your office mates are despised. Imagine that your malfeasance made you the subject of a potential Congressional hearing. That’s what the Astros are facing come April when the 2020 season begins.

They’ll need a song to steel them for the jeers and vitriol and the most don’t-give-a-fuck song of all time comes right from Houston’s own Z-Ro. The Mo City Don’s anthem to self-reliance against haters is a big middle finger the Astros can collectively throw up in visiting cities where they'll be ridiculed and vilified. It also works for the recently fired, so Luhnow and Hinch might find some solace in the song.

A whole legion of Astros fans now must determine whether the 2017 title was real or as fake as those replica World Series rings the organization gave away throughout 2018. Fans had no control in these events, they’re just the unwitting bystanders whose hard-earned money was spent taking their kids to the ballpark, the same kids they now must discuss cheating with and why it isn’t (or is?) okay in life. It’s difficult to envision a scenario where anyone involved at the team level didn’t stop to consider how fans would feel should these allegations of cheating come to light. Now that they have, the fans – whom players routinely say they play the game for – are the biggest losers of all. As it all unfolds, perpetrators are being rounded up by the “Karma Police.” The morose tone of this Radiohead song fits the fans' mood and it contains some lines which have rung in our heads since this whole mess started. “For a minute there, I lost myself,” speaks volumes about those involved. And, that repetitive refrain - “This is what you'll get” – says it all.
KEEP THE HOUSTON PRESS FREE... Since we started the Houston Press, it has been defined as the free, independent voice of Houston, and we'd like to keep it that way. With local media under siege, it's more important than ever for us to rally support behind funding our local journalism. You can help by participating in our "I Support" program, allowing us to keep offering readers access to our incisive coverage of local news, food and culture with no paywalls.
Make a one-time donation today for as little as $1.