Travels with Gen Z: The Rock and Roll Hall of Fame - Part II The Rock Hall's message is clear even before you enter the doors. Vincent Ruggiero is in those letters somewhere. Photo by Bob Ruggiero
Note: In Part I, we looked at the Rock Hall and how it was striving to appeal to Gen Z with new attractions. In Part II, we give some background on its foundation, current exhibits, Houston connections, and just what is considered “rock and roll.”  Also, the Rock Hall has announced that due to the coronavirus outbreak, they will be closed until at least March 27.

“The Hall is the crown jewel of this city. If it was in L.A. or New York, it would just be one of a dozen great cultural institutions,” says Rock Hall President/CEO Greg Harris. “And while Cleveland has some great museums, there’s only one Rock Hall in the world.” Beatlemaniacs have plenty to see, including instruments, outfits, artifacts, and original handwritten lyrics from the Class of 1988 inductees.
Photo by Bob Ruggiero
While the Rock and Roll Hall of Fame Foundation was established in 1983 and held its first induction ceremony three years later, it didn’t have a physical home until 1995. That’s when the I.M. Pei-designed building featuring seven floors of exhibit space and a distinct glass pyramid outside (similar to the one Pei designed for the Louvre in Paris!) opened its doors on the shore of Lake Erie.

Many cities vied for the Hall’s permanent home, but Cleveland went hard offering a lot of financial aid and incentives, along with huge citizen support. Cleveland also had something of a spiritual claim to the site.

After all, local disc jockey and charter Hall inductee Alan Freed popularized the term “rock and roll” on his broadcasts, and held package shows in the early 1950’s (including his “Moondog Coronation Ball”). In the ‘70s and ‘80s, powerhouse radio station WMMS popularized a number of artists who went on to nationwide fame, at a time when that sort of geographical spread was possible.

“I would say ‘Why not Cleveland?’ Bruce Springsteen and Rush kind of broke here,” says SiriusXM DJ Rachel Steele, who broadcasts daily from a glassed-in studio on the Hall’s ground floor. “I look at it from a fan point of view, and being a bit of an underdog. Cleveland is a rock and roll town.”

And after all, doesn't Huey Lewis remind us that "the heart of rock and roll is still beating...in Cleveland?"

The Hall features both permanent and rotating exhibits of instruments, clothing, ephemera, and artifacts. Video screens show performance and interview clips continuously. Labels are detailed and informative, but not overwhelming. Elvis Presley, the Beatles, the Rolling Stones, and Jimi Hendrix have their own sections.
But it’s not just limited to vintage subjects. While there’s a “Woodstock at 50” section, there’s also one celebrating the Vans Warped Tour. Other areas focus on regional scenes and “Right Here, Right Now” showcases contemporary names including Taylor Swift, Billie Eilish, and the Weeknd. I came face-to-neck with one of the most famous guitars in all of rock history: Bruce Springsteen's Fender Esquire/Telecaster.
Photo by Bob Ruggiero
Because of his obviously wonderful upbringing, Vincent is more steeped in knowledge of ‘60s-‘80s rock music, artists, and history than most of his peers. And while his experience in The Garage (detailed in Part I) was a highlight and definitely filled with Gen Z appeal, three other areas grabbed our attention.

Play It Loud: Instruments of Rock and Roll – After debuting at New York’s The Met last year, this unprecedented collection of instruments spread across several floors and played by a dizzying array of artists is now at the Rock Hall through September 13. Each guitar, bass, keyboard, or drum set elicited a “wow.” But even I was stunned to turn the corner and find myself face-to-neck with Bruce Springsteen’s Frankenstein modified Fender Esquire/Telecaster, his primary guitar on stage and in studio from 1972-2005 and featured on the cover of Born to Run. Other famous axes included Eric Clapton’s “Blackie,” Jerry Garcia’s “Wolf,” and Eddie Van Halen’s “Frankenstein.”

Don’t Knock the Rock – This permanent exhibit chronicled protests against rock music and performers from Elvis (suggestive movements) and the Beatles (“We’re more popular than Jesus”) through Ice-T (“Cop Killer”), Judas Priest (suicide/backward masking trial) and the PRMC hearings. While watching footage of Southern U.S. teens gleefully burning their original Fab Four records and memorabilia, I could only think “Shit! All that stuff would be worth a fortune right now!”

The Power of Rock Experience – In the last major project before he died, famed director Jonathan Demme edited together a 12-minute film of Rock Hall induction performances over the years. But rather than just being another highlight reel, this fast-paced compilation screens in a theater with an immersive experience through inventive uses of several screens, a light show, sound that rattles your seat, and even smoke effects. It’s pretty amazing – and the scene is set with a five-minute speech highlight reel that attendees see first. Fittingly, The Power of Rock Experience ends with an extended clip of Prince’s show-stopping solo on the Beatles’ “While My Guitar Gently Weeps” from George Harrison’s 2004 solo induction.

A concert stage set up used by the Houston-bred and Rock Hall Class of 2004 inductees ZZ Top.
Photo by Bob Ruggiero
Houston connections – Artifacts from artists associated with the Bayou City include a Lightnin’ Hopkins guitar, colorful instrument set from ZZ Top, and a gold dress worn by Beyoncé.

We visited during the week that #Coronapocalypse took off. The Rock Hall – like so many other public museums and institutions – noticeably beefed up their amount of hand sanitizer stations around the building. Then they announced that the May 2 induction ceremony for the Class of 2020 would be postponed. Performer inductees are Depeche Mode, the Doobie Brothers (one of Vincent’s favorites – Rock Hall staff commented on his Doobies T-shirt all day), Whitney Houston, Nine Inch Nails, the Notorious B.I.G., and T. Rex.

If you want to get any music nerd’s blood boiling – myself included – just open up a highly subjective discussion about which acts aren’t enshrined in the Hall that you believe should be, or those who are in that you just know have no place there. And even though the nomination process is fairly democratic and a lot more open than it used to be, I still made a tail-end-of-the-interview pitch to Greg Harris for my two biggest exclusions to date: Peter Frampton and Bad Company. 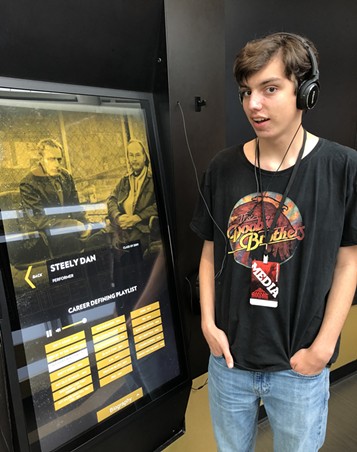 Digital jukeboxes allow you to listen to music from inductees. Here, Vincent grooves to some Steely Dan, Class of 2001.
Photo by Bob Ruggiero
Finally, a glance at any recent inductee list brings up another sore spot for some: Why are there so many artists in the Rock and Roll Hall of Fame whose work would never be filed under the “Rock” section of any record store?

Harris hears it all the time, especially around nomination/induction time. But he holds fast that the umbrella of Rock and Roll is wider than the term itself and as the years progress, will grow even bigger.

“Rock and Roll was never just four skinny guys with long hair and guitars. It came from blues, gospel, country, R&B, and doo-wop. And you could have both Simon and Garfunkel and Jimi Hendrix in the ‘60s,” he says. “We take the big tent approach. It continues to get fragmented, but it’s all about the attitude and spirit. There’s a much broader palette to make this music.”

We left the Hall and took some pictures in front of the huge “Long Live Rock” letter display. I came away with an even deeper appreciation of the music, the performers, and the message.

I even refrained from draining the bank account at the Gift Shop with its amazing vinyl and CD selection (I couldn’t deny Vincent a Hall hoodie, though). And there was enough different or new from my last visit some years ago to make the 6 ½ hours we spent there worthwhile.

As for Vincent—like a lot of teenage boys—it’s sometimes hard to decipher his mood or thoughts about something from his inscrutable facial expression or few words uttered. But every so often, I’d catch him out the corner of my eye, smiling with a face full of wonder and interest at something he saw or did.

There are plenty of grumpy Boomers or Gen Xers bemoaning what “these kids today” are listening to, or feel they don’t have the “respect” for the music of their own youths – just like they were told by their own parents. But in the words of Who singer/guitarist Pete Townshend—whose one of many beaten and smashed guitars is now on display behind a glass case in the Rock and Roll Hall of Fame—I can offer only this: The kids are alright.

For more on the Rock Hall, visit RockHall.com
KEEP THE HOUSTON PRESS FREE... Since we started the Houston Press, it has been defined as the free, independent voice of Houston, and we'd like to keep it that way. With local media under siege, it's more important than ever for us to rally support behind funding our local journalism. You can help by participating in our "I Support" program, allowing us to keep offering readers access to our incisive coverage of local news, food and culture with no paywalls.
Make a one-time donation today for as little as $1.