A Longtime Loner Returns to the Pack with Ever The Wolf 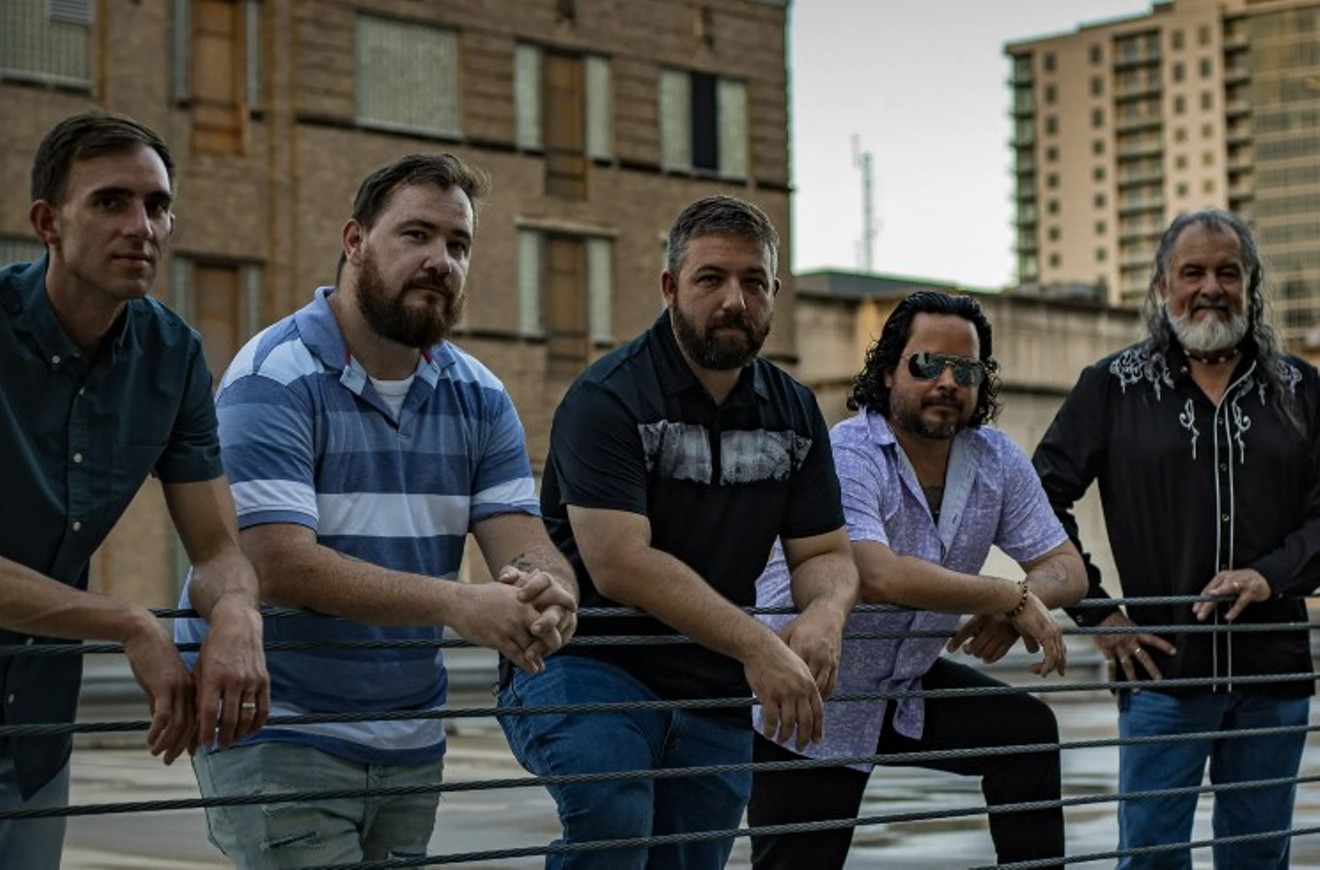 Ever The Wolf Photo by Aaron Guzman/Lost Trinity Media, courtesy of Ever The Wolf
Why do wolves howl? You might know the answer from National Geographic or watching Discovery Channel. The short answer is it’s their way of interacting with each other, their social call to unite for a common goal, like a hunt. For Carlos Cisneros, who’s lonesome howl was answered recently, it’s more than an interesting wildlife tidbit. It’s the driving element to a new chapter in his musical life.

Cisneros is the lead singer and guitarist for Ever The Wolf. The Houston-based indie rock band Cisneros pulled together just released “Kind Sunlight,” the lead single from the group’s self-titled debut album. The album is due on all major streaming platforms September 16 and Ever The Wolf has several shows slated to celebrate its release, beginning this Saturday, September 10, at BFE Rock Club.

“I’m 44. I’ve been involved in the Houston music scene since I was 17,” he said. “I was playing back before we had all these resources at our disposal. I’ve been writing and playing since I was 14 and started my first band around 17 and had some good success.”

“We were all kids, man. Fucking rock and roll, that was it, man,” Cisneros said of those days. “It’s hard to keep a band together when you’re young. Substance abuse was all over, it was all around us. Drugs were everywhere and I think everybody just kind of lost sight of the bigger picture.”

Cisneros admitted the pictured blurred for years after Zero to Zen’s break-up. He went on a long hiatus.


“I kept writing but I put the guitar down for a number of years and went through some dark times,” he shared. A lone wolf, he kept prowling, but stopped howling.

“It’s almost like, what were you doing it for? There was no end game, it was just surviving. Because if I wasn’t writing or performing it was just gonna be much worse,” he said. “But now, you realize, man, it’s all about the connection. Music saves you when you’re listening to it and when you’re making it. And that’s what you want to give people.”

Cisneros found his way back to the pack a few years ago. Inspired by Ani DiFranco, whom he considers “the greatest independent artist of all time,” he began recording his stockpile of songs in 2018. To fund the project, he went for “the money gig” and auditioned to sing for a cover band where he met guitarist/vocalist Brandon Hatcher, bassist Kyle Strange and drummer Mike Acosta. They’re all fellow Texas music veterans but Cisneros met them at the audition in 2019, about six months before COVID struck. He got the gig.

“You’ve got two progressive liberals here. One gay, one straight. You’ve got a Trump lover. You’ve got a six-foot, Mexican-American hippie,” he said, running through the band’s diversity. “It’s a good time to remind everybody that the art form, any art form, can bring us together. That’s kind of what our vibe is.

“As interesting as our backgrounds are, that all affected how we approached COVID, right? Because you had some people going, ‘Oh shit man, I’m scared. I gotta wait ‘til a vaccine comes out.’ That was me. I’m like shit, man, I’m not catching this shit,” he said. “Brandon’s like, ‘Naw, man, it’s make-believe. Nobody believes it.’”

“Make-believe” or not, Houston’s venues took the threat of COVID seriously and opportunities for cover bands dried up. That allowed Cisneros to ask his new bandmates if they’d be interested in working on original songs. He asked Hatcher if he’d listen to the demos he’d been recording. Hatcher heard promise and brought Strange and Acosta into the fold. Keyboardist Will Schumacher was added and the lineup was complete.

“I think it was fated, man. This is a great group of musicians, we all have a lot of years of playing and experience underneath us but literally in this band we’re kind of in the embryotic stage. But we deliver in a way that doesn’t sound like that. Just sonically, musically, we just really gel,” Cisneros explained.

Scrolling through the band’s website, the phrase “music changes everything,” appears here and there. It’s sort of a motto for what Ever The Wolf is doing.

“You want to have universal relatability in your music, as much as possible. But I think there’s always an audience you’re going to target by default, you know? I think for us, you’ve got to have lived a little bit of life, had a little bit of life experience, go through some shit, wanna have a family, have a family, know what some struggles are like in different areas of your life to dig in deep to what we’re saying,” Cisneros said. “This is some serious, intellectual music that we’re trying to make and hopefully make that connection and impact lives in a positive way.”

When we spoke, the band had just finished mixing its album at Southwing Audio in Spring.

“Man, these guys are phenomenal. Two brothers that built the studio literally from the ground up. They poured the slab,” Cisneros he said. “They get our vibe.

“We’re still riding a high from this weekend because all of our hard work, all of our sacrifices, all of our families’ sacrifices that are supporting us – when we finished mixing that album and we were there with engineers and everybody, and they’re like family too, man, we popped a champagne bottle and took a little sip. It was just that fucking smile of like ‘We did it.’ We made this and it’s gonna be out and now we can start actually making a difference and making the connection, because that’s what it’s all about.”

Songs touch on various subjects, including some heady ones like child abandonment and growing up in foster care. The lead single was written by Strange and Cisneros described it as “a real driving song, kind of a punk-ish feel to it. It talks about mistakes, man. It’s like lighting a match and the flame becomes a widespread fire.”


One of the more interesting tracks on the album may be “Rifle of a Sage,” which Cisneros wrote. He said it’s “an 11-minute song, which is very bold for a band to put on an album, much less your debut album. I stand behind it. For me, that’s my proudest moment as a songwriter. It’s an 11-minute epic.”

Cisneros said the song was inspired from reading about a jilted lover who exacted revenge on an unfaithful spouse by committing murder-suicide.

“I know that right off the bat it’s like, man, why would you want to write about that? With all the gun violence and everything, is this right to put something like this on (the album?)” he said. “You’ve got to be true to your art form. You’ve got to be true as an artist. It’s hard to talk about some of the truths that are out there, but you’re sending the message of hope, even in songs about failure and mistakes, that you know, maybe we can get it right. That song just takes you on this journey into this guy’s last sane moment until his life’s over. It’s just a very diverse album. We’re really hoping to bring back quality songwriting with good melodies, give people something familiar.”

“If I’m looking into the future, I would like to be able to say sometime from now, hey, do you think that was your best album? No. Because that means we don’t have the foresight to see evolution in the band and maturity,” Cisneros shared. “But, I hope that it’s like our most fucking raw album, man. From an emotional standpoint, from when you hear the songs, because we recorded 90 percent of it live, minimal overdubs, because we’re just such a good band live.”

Cisneros said he hopes the debut album isn't the band's best work ever, but something to grow on
Photo by Aaron Guzman/Lost Trinity Media, courtesy of Ever The Wolf
Cisneros said the band wanted to capture that live energy on the album, but there are some chances for you to experience it in person soon. Past this Saturday’s show at BFE Rock Club, there’s a show slated for Drifters Icehouse in Richards, Texas September 18 and a September 24 gig at 19th Hole Grill & Bar in Spring.

The name of the band and the work it’s doing are reminders to Cisneros of his place in the music world. The pack isn’t just his trusted bandmates, it’s all musicians, everyone who believes, like him, that music changes everything. After years of lonesome howling, he’s found his way back to the group.

“I can write a good song. I’m confident. I’ve been doing it long enough, I know my craft, I know my limitations. I’m not going to drink Kool-Aid and have people lie to me and know that it sucks. My good song will only become great if I have the right people next to me and the right components,” Cisneros said. “Symbolically, (the wolf) is usually a symbol of power and intelligence, right? But in the sense of the band, Ever The Wolf, what it basically means is yeah, you can survive on your own, but you thrive with the pack. That’s basically the philosophy behind it. We thrive together.”