Fish Out of Water: What's With Houston's Poke Obsession Anyway?

Lunchtime at Ono Poke usually means a line out the door. Photo by Troy Fields

The night Tuan Tran debuted Moku Bar, a poke pop-up event in downtown Houston’s Conservatory, a line quickly formed at the counter. Sixty people. Seventy. An hour later, 100. Tran found himself overwhelmed, actually calling friends on the phone to come and help him and his two workers serve up the marinated ahi and rice bowls. It’s estimated he made somewhere around $4,000 in the course of four hours. This was less than a year ago.

Poke is a Hawaiian staple: raw fish marinated in soy sauce or sesame oil. But it appears to be in Houston to stay. The word itself means to slice, and as you’ll find in any online explainer this side of Bora Bora, it’s pronounced poh-kay, rhyming with mmkay, which is probably what some Californian entrepreneurs said when their business partners propositioned them to change the word’s spelling to poké as a coy marketing plan, thus cementing the mainland’s bastardization of Hawaiian culture forever more.

Iterations of the raw fish salad have been around in California for decades, but the newfound trend that includes everything from poke bowls to poke nachos to poke burgers has been having a major moment in cities such as New York and Chicago since 2015.

Just last year Eater even posited that poke might be America’s next Chipotle-scale fast-casual trend thanks to its appeal to both consumers and entrepreneurs: It’s healthy, easy to eat on the go, and extremely quick to make (even in build-your-own format), and has a forgiving start-up cost thanks to the need for only the most bare-bones kitchen. Foursquare data indicates that Hawaiian eateries have practically doubled in two years’ time, a growth rate that could mean more than 1,000 Hawaiian spots will have opened in America by 2020.

In Houston alone, Yelp currently shows more than nine pages of options for restaurants serving poke, from Kata Robata to Steak 48. A Yelp chat thread devoted to Houston’s poke scene notes random sightings of the dish, at Costco even — $15 a pound, various flavors.

“It’s basically just cheaper sushi,” a local chef recently told me, which may point to poke’s appeal. That all raises the question: Is it indeed just a trend or is poke here to stay? The Houston Press took a deep dive into four new poke operations to see just what all the fuss is about and where these proprietors see their businesses heading as steep competition pours into town from New York’s Pokéworks and California’s North Shore and one of Houston’s most anticipated newcomers, Seaside Poke. 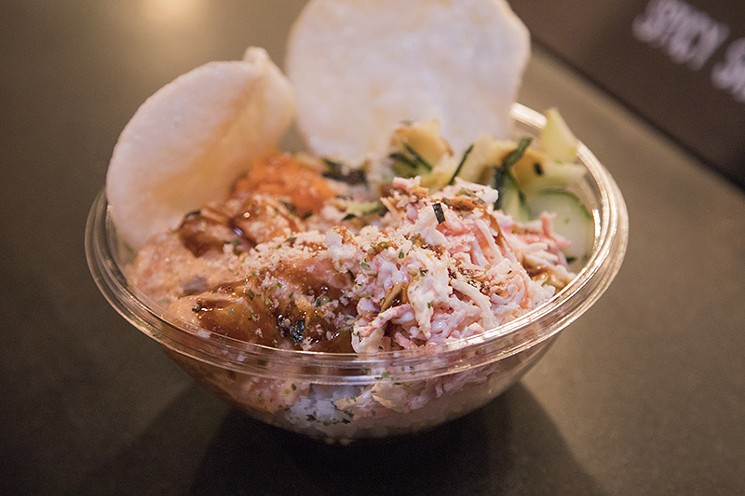 It’s a quiet day inside the beer hall where the Moku Bar counter resides, post-lunch, torrential rain coming down outside, and Tran takes a breather. He honed his chops at sushi restaurants in New Orleans and Houston and today runs the Casian King food trucks. He opened Moku Bar in late March, “because I saw all these other guys doing it.” He laughs.

“Actually, I was doing poke back in 2013. I went to Hawaii for a friend’s wedding and it was everywhere. Gas stations. In their version of Walmart, they have a sushi-bar-type setup in back and just a row of poke to choose from, like 40 types, tuna, mussels. Everything.” He pulls up an Instagram photo of his first marinated poke, which he served while working at Pho LN & Sushi Bar. Tuna in a margarita glass. No rice in sight. October 2013, the date reads.

Today Tran serves his poke over rice, quinoa or greens. There are a few people milling about near Moku Bar, but nothing like the typical lunch rush or late-night crush he’s used to on the weekends. “People come in at 2 a.m. and don’t really want raw fish,” Tran says, which is why his concept also includes tempura snacks and Spam musubi. He’s just added a chalkboard menu to his counter, which he hasn’t had up for the first few weeks of business, a period that has been a killer, he acknowledges.

“I’ll be honest. Right now it’s tough,” he says. Tran finds that one problem customers are having is that they don’t want to pay $13 or more for a bowl of poke, despite the fact that the very same people might lay down $15 for a sushi roll at a nearby restaurant, for what he says is the same quality of fish but a lot less portion-wise. The eatery has faced some stiff criticism online. Yelpers being Yelpers: Unless they stop being so cheap and the prices actually matches [sic] the size of the bowl, I won’t be coming back. “My biggest goal right now is education. Educating our staff, so they can tell the customer what we’re serving them.”

Tran ships in ahi daily from Hawaii, and actually pre-marinates his poke, which other shops consider a pretty big risk. It’s been a hit-or-miss decision for Tran, with food waste being one of the biggest challenges he’s facing. Still, he can build a bowl of poke in under one minute flat, and the flavor imparted by the marinade is, in my opinion, one of the reasons Moku Bar stands out among the competition. His top sellers include a truffle yellowtail bowl and a spicy salmon option, the Mady’s Bowl, which has these highly addictive shrimp crackers in it. He also lets customers build their own bowls as well, but the add-ons do add up quickly.

I ask Tran if he’d consider a poke food truck, but he’s not really into it.
“The great thing about a truck is it’s so small, and food cost is just around 15 percent. Here we’re at 30 percent. But with a truck, you have to be a chef and a mechanic. You can only hold so much food on board. It can get crazy.”

A brick-and-mortar Moku Bar is already being planned at an undisclosed location anyway. The upcoming location will function more as a tiki bar with a food menu, which is a good bent to have with so many poke restaurants and pop-ups — nearly a dozen will seemingly be in operation by the end of summer. Tran doesn’t see the competition between these new poke restaurants as cutthroat. Everyone is just focused on his own operation. “I mean, I’m friends with Ono. I’ve tasted their poke,” Tran says. “But if I see friends online talking about North Shore, I’m like, ‘C’mon, you’re not going to rep Houston?’”