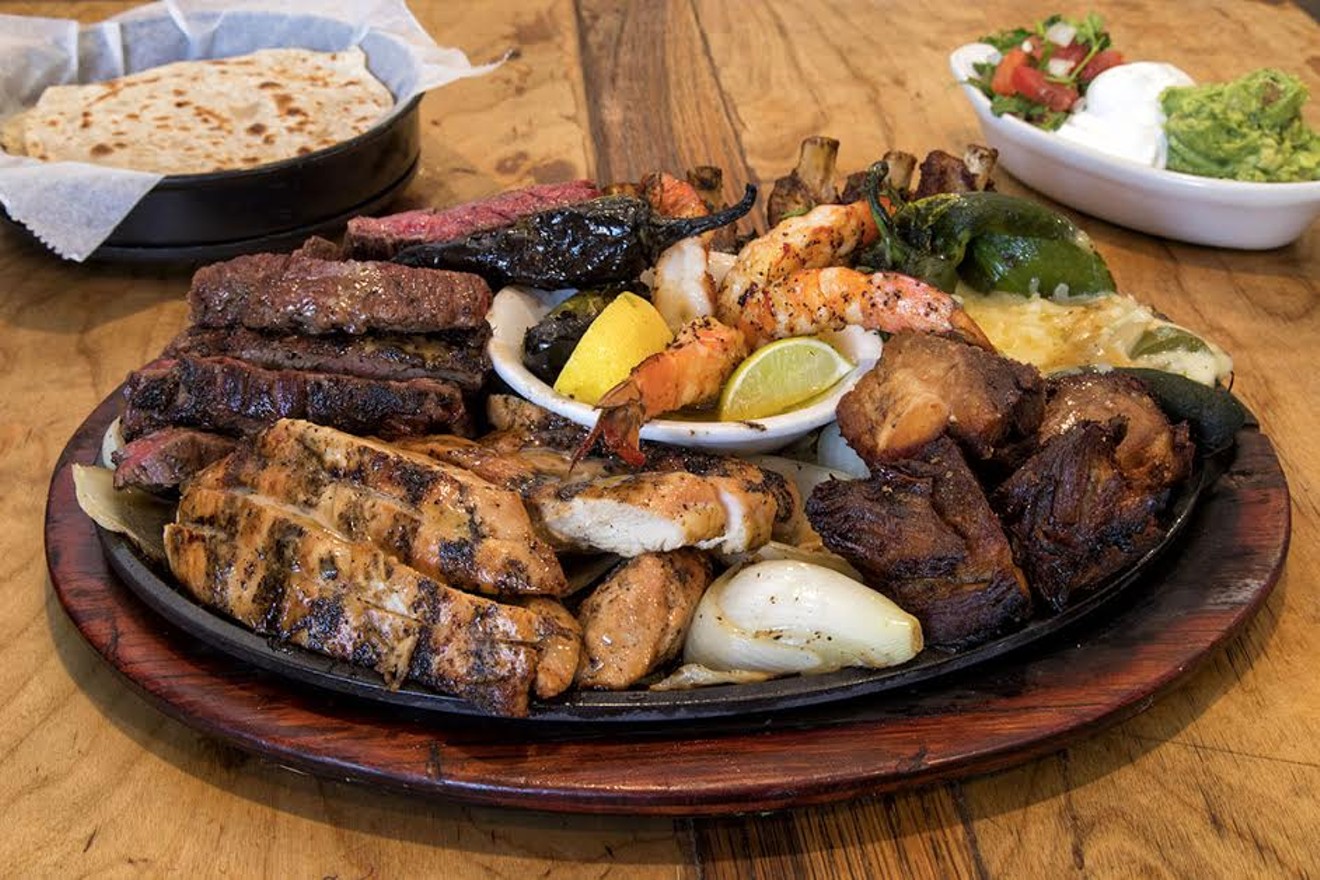 The Original Ninfa’s On Navigation made fajitas famous, and today the mixed grill platter is still a must-order item. Photo by Troy Fields


Robb Walsh is rummaging through the dry storage area in search of the anchos. We’re in the kitchen of his Montrose ode-to-old-school Tex-Mex restaurant El Real, which the Beard Award winning writer and former Houston Press food critic opened in 2010 with chef Bryan Caswell. He pulls out a large plastic tub of chiles and drops it on a huge sack of rice.

“If you’re talking about the basic flavors of Tex-Mex,” he says, “you have to start with the chiles."

The tub is filled with pounds and pounds of dried anchos in plastic bags, their aubergine-hued hides, the bulbous flesh of them, seemingly turned to fruit jerky. That’s what they taste like. Kind of. “The flavor is a little bit like raisin,” he says. “Huh?”

They would be a tasty snack on their own, but I’m not sure what sort of diuretic effect that would have on the body — when ground down into powder form as they are at El Real, mixed with cumin in a coffee grinder you’d normally find on a grocery store aisle, they’re certainly not enough to make any bowl of chile con queso digest any more quickly. Granted, I’ve had only a few months to test this theory.

Next he pulls out a long pepper, the tall, skinny pasilla. I rip off a small, spicy piece of its flesh and it turns to fire on my tongue. That’s how you know you’re a true gringo, attempting to figure out what Tex-Mex is all about and weeping in a kitchen on Westheimer instead.

I already know a few things. The fact that this cuisine is overly maligned. The name itself, Tex-Mex, originated from a put-down made by the food writer Diana Kennedy back in the early ’70s. She was a Brit and an authority on Mexican cuisine. The way Walsh makes it sound, she basically convinced The New York Times and its readers that Tex-Mex is nothing more than a bastardized version of Mexican food created by and for rednecks.
Before this, restaurants in Texas just called their unique regional fare Mexican, and, in fact, many still do today. Restaurateur Sylvia Casares calls it Mex Tex and “the original fusion.” Domenic Laurenzo, grandson of legendary Mama Ninfa, calls it “Mexican food that’s been modified for the American palate; the size of Texas.” Walsh calls it the lovable ugly duckling.

Still, Kennedy’s tribe persists. In 2015 Anthony Bourdain called Tex-Mex drunk food. And in July a writer for the Daily Texan called it “distinguishably disgusting.” Commenters immediately noted that the writer was vegan.
This is, after all, a cuisine built upon steak and yellow cheese, no mystery there.

It is said ZZ Top founder Billy Gibbons eats only Tex-Mex. Lindsey Buckingham is a fan. Walsh’s own Tex-Mex Cookbook counts James Dean, Van Morrison and The Beach Boys as lovers of the cuisine. Franklin Delano Roosevelt had a combination plate named after him in Fort Worth, and one of the few agreeable things Senator Ted Cruz has ever uttered in his life concerns Tex-Mex, noting that good queso "speaks to the soul.”

Today the most essential Tex-Mex dishes in Houston seem to be the cheese enchilada, fajitas, chile con queso, the margarita and rice and beans. But “it all goes back to chili con carne,” Walsh says, to the Lower Rio Grande Valley, where the chili con carne craze started at the turn of the century, aided by the invention of the railroad. Midwesterners traveled to Texas and chili traveled to the Chicago’s World Fair and beyond. In San Antonio, vendors and fondas (houses and inns) became famous for Mexican street food. And so began Tex-Mex.

Today there’s much to love about Houston’s Tex-Mex. It certainly deserves a place among America’s best regional cuisines, not as a trashy or fake Mexican counterpart, but as one of the nation’s most authentic representations of everyday regional foodways, one that captures the storied history of the Lone Star State, its many families and matriarchs and the meshing of Tejano and Anglo cultures. But also a little bit of unbridled lunacy.

Sylvia Casares, a Brownsville native, brings the flavors from North and South of the border to her numerous signature enchiladas.
Photo by Troy Fields
Sylvia’s Enchilada Kitchen, 6401 Woodway

Everyone in Houston seems to have a little secret, or maybe it’s no secret at all. They all judge Tex-Mex restaurants based on the cheese enchilada alone. That’s a good thing for Sylvia Casares, also known as the Enchilada Queen, whose menu features 18 enchilada options. When she opened her first restaurant in Rosenberg in 1995, most restaurants were focused on the fajita craze. “That was a major part of their menus, and enchiladas were an afterthought. I was the opposite.”

The key to a good enchilada, she says, starts with the chili gravy. She’s worked on her own recipe to the point that she now deems it a “10,” à la Bo Derek. It takes a full day to make. “A symphony of flavors” is her preferred nomenclature for describing the sauce.

“I’m a native Texan and I grew up on the Mexican-Texas border,” she tells me on an afternoon at her Woodway location over chips and salsa — served hot in temperature and not too spicy — under the breeze of a dozen ceiling fans on a covered deck. Near the gurgling fountain, a squirrel has found a corn chip and makes off toward a tree to feast. “I believe that’s the watermelon of Tex-Mex. We call it the Garden of Eden of Tex-Mex. A lot of these restaurants are from people who got to know Tex-Mex in adulthood. I grew up eating it every day. Good, bad, mother’s, grandmother’s, neighbor’s, whatever. And so I have that native palate.”

Her first menu was simple, composed mostly of combination plates that her cooks helped her learn to make: cheese and beef enchiladas, basic chalupas, crispy tacos. “We didn’t even do tamales,” she says. Today she teaches cooking classes on how to create “rock star”-quality tamale dough.

But it’s still all about the enchiladas here.

An order of the North of the Border and South of the Border platters hits the table, long trays draped with colorful and decadent enchiladas, the plating reminiscent of abstract works of art. It looks haute. But it tastes like home. Well, Casares’s home anyway. “We were always going to the other side, el otro lado we called it, and eating over there, before it got too dangerous with the cartels.”

Enchiladas inspired by Mexico set Sylvia's Enchilada KItchen apart from other Tex Mex eateries in Houston.
Photo by Troy Fields
The Mexican enchiladas are what she says sets her apart from other restaurants. But it’s the enchilada selection as a whole, and the execution, that astound. There are cheese enchiladas cloaked in chili gravy and beef enchiladas almost indecent with thick chili con carne. There’s a crab enchilada; a beef enchilada served pancake-style in stacked layers, popular in El Paso and classically served with cheddar and onions, topped with chili gravy or salsa roja, and in many cases a fried egg. There are spinach enchiladas lathered in salsa verde, and the true standout: The calabacita squash enchiladas doused in a light, white cream sauce that seems sent from the heavens. The one you will go back for, even though it’s vegetarian.

“Calabacita and corn is a skillet meal my mother would prepare with chicken or pork,” she says. 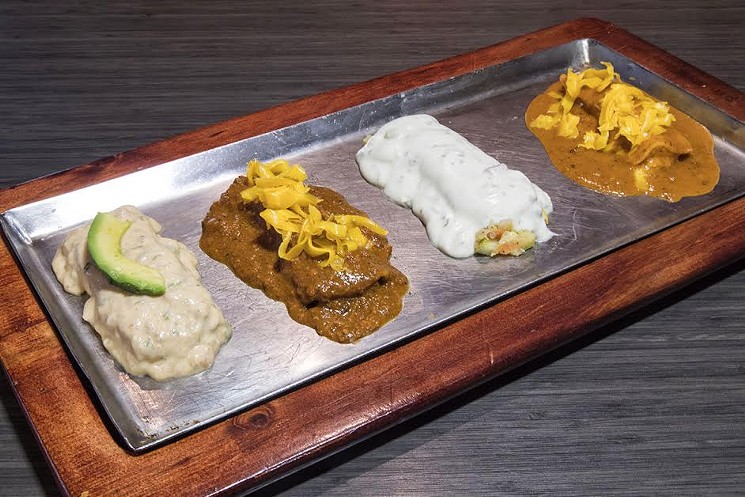 Sylvia Casares' North (of the border) enchilada platter is inspired by Texas border towns and cities.
Photo by Troy Fields
Each enchilada goes through a three-step process. Tortillas are dipped overnight in a chile-based sauce made from mild guajillo peppers. The corn tortillas are heated up in hot oil to become pliable, and then — as soon as an order comes in — they’re filled, rolled and cooked in an oven until bubbling and steaming. “There is no microwave involved. This is labor-intensive.”

These days Sylvia’s Enchilada Kitchen is a dependable spot for fajita steak. “It took me years of research, reading cookbooks, calling A&M [meat science department] to finally be happy with them,” she says.

The fresh, prime outside skirt steak is cooked over mesquite — the wood of plenty, as she calls it — which turns out a faintly smoky, tender, medium rare bite, one that currently “costs about $14 a pound by the time the meat is all trimmed down and the waste thrown out.”

Still, it’s worth it. Put that slice of beef on a tortilla, made here with the flour her grandmother preferred. “If you go down to the valley, all the fondas and mom-and-pops, they all use White Wings for their tortillas, and it makes a difference. It just tastes better.”