Man and Pig: A Relationship In Need of a Second Look 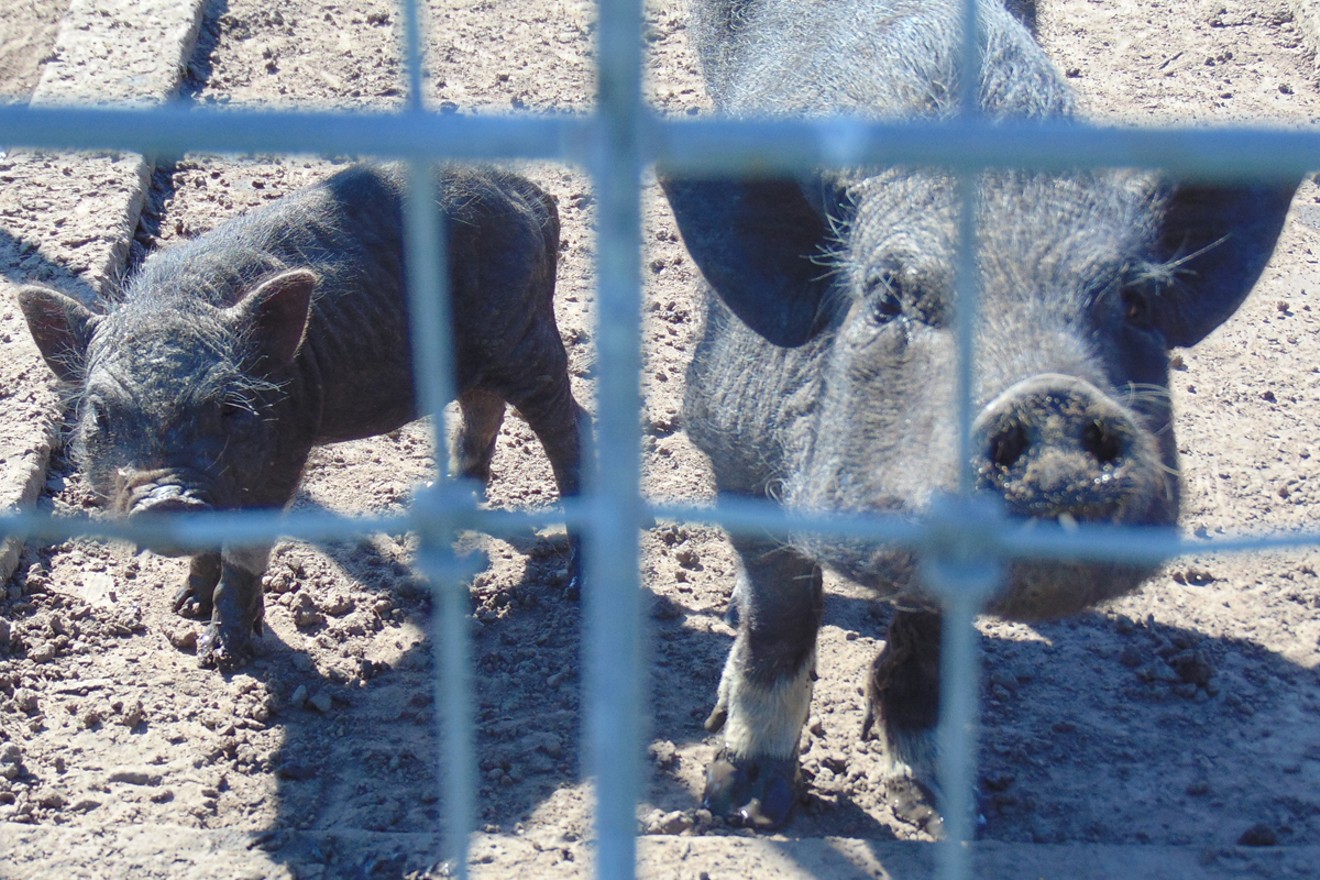 Given a choice, we'd prefer to stay clean. Photo by Mark Reyes
We've all been in a relationship that's reached its natural end: a childhood friend we've outgrown, the significant other who became insignificant, the job that lost its luster. Is it time to reevaluate how we interact with pigs?

On a macro scale, there are plenty of reasons to rethink America's position as a pork-producing country. The African swine fever already has caused devastation to China's hog herd, as well as to parts of Southeast Asia and eastern Europe. If the disease took hold here, it would be difficult to protect our more than 77 million pigs.

There are ethical issues, as well. Is it truly fair to ask workers to continue working in meatpacking plants during a pandemic? We like to eat pork products, we enjoy their taste and flavor, but meat is not essential for human life. And it's not as if those packages of bacon, sausage and pork chops were feeding food insecure Americans; in April alone we exported 129,000 tons of pork to China. Should the package labels have been rewritten to say, "Consumption of this product may have resulted in the illness or death of American food processors."

"I object to intellect without discipline. I object to power without constructive purpose," Mr. Spock, Star Trek (TOS), The Squire of Gothos.

Sentience: the ability to perceive one's environment as well as experience pain, suffering, pleasure and comfort.
Photo by Jean/Flickr via CC (cropped)
But those are all large scale debates, and prone to strong opinions based on political, religious or dietary affiliation. On a more personal level, what does man's relationship mean to each individual pig? Have you ever really looked closely at a pig? From their hairless skin, light-colored eyes and heavy eyelashes, they share more than a few comparable traits with humans. In fact, pigs are actually very clean animals. The misconception that they are dirty animals is because they are often held captive in cages, wired enclosures or wooden pens with gates. Where else is a pig supposed to go?

“The greatness of a nation and its moral progress can be judged by the way its animals are treated.” — Mahatma Gandhi 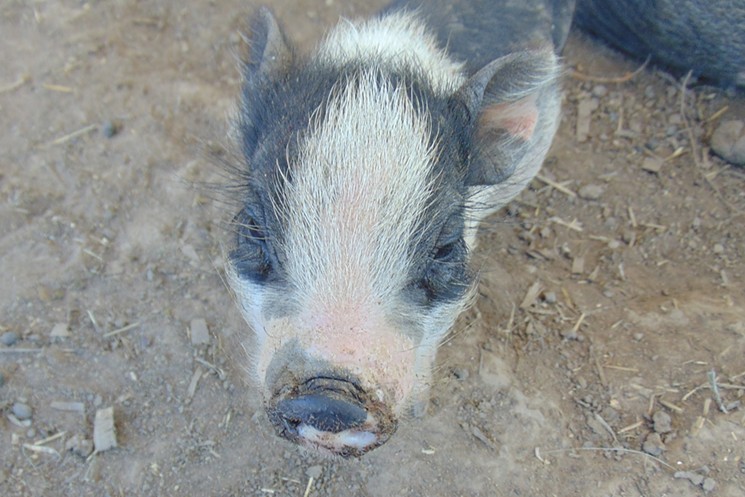 This little piggy hangs his hat in Sealy.
Photo by Mark Reyes
Here in Texas, there are a few lucky pigs who have escaped the slaughterhouse or euthanasia and end up in the care of a rescue organization. On a recent site visit to Houston Mini Pig Rescue and Farm Sanctuary we learned the stories behind some of the almost 300 fat and happy creatures that hang their hats out near Sealy.

Some of the pigs were found wandering along the back roads of Texas or in a busy gas station parking lot. Others were used to train fighting dogs and suffered serious injuries. Still more were abandoned by families when they outgrew their cute "teacup" size.

What’s not to love about a mini piglet? They’re cuddly, curious and affectionate, and adopters often have dreams of a ‘gram worthy teacup- or pocket-sized pet that will draw oohs and ahs from family and friends — not to mention blowing up their social media feed.

But when reality sets in — that anything under 350 pounds is considered “miniature,” that their poop really does stink, and those inevitable zoning restrictions rear their ugly heads — these precious pets soon become undesirable problems. 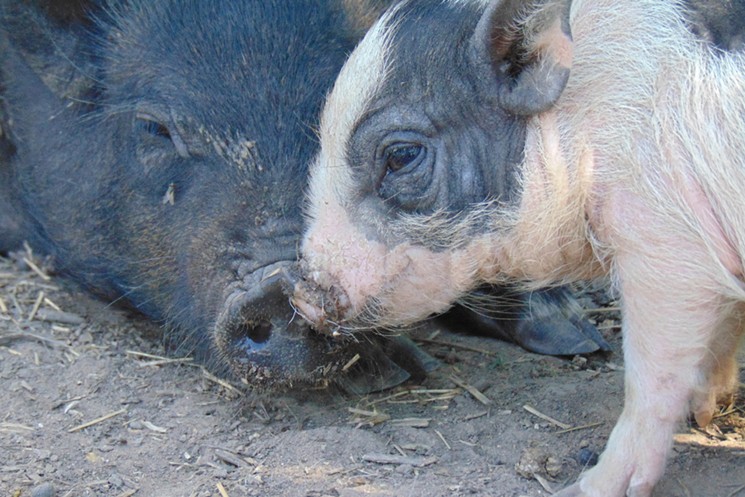 A family that stayed together.
Photo by Mark Reyes

Society needs to a second look on how we treat these highly intelligent and social animals. Their behavior in groups is very similar to man's best friend: dogs. The fact is that these animals want to be loved, and they love to interact with other animals and people. During my visit to Houston Mini Pig Rescue I had a 300 pound pig that seemed to take a liking to me. The pig followed me around like one of my rescue dogs. I was moved by the new experience and hoped that more people would revisit their opinions. 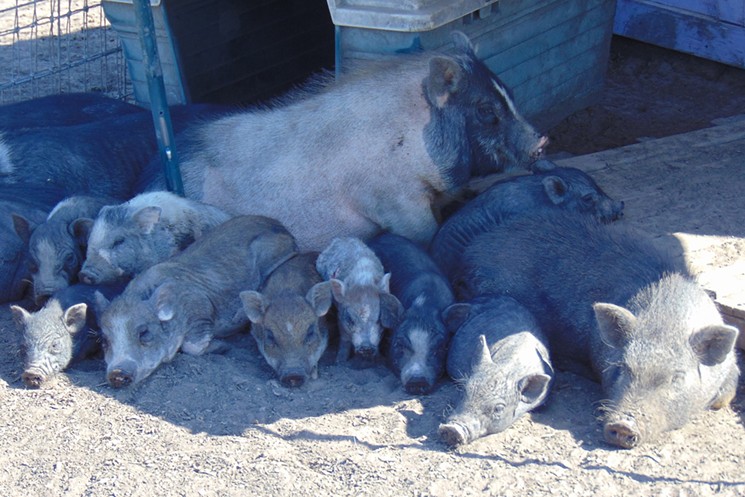 Gene Pirelli says baby pigs line up in the same order every time; each one has its place. "They’re quite intelligent, do respond to their environment," says Pirelli.
Photo by Mark Reyes
There is another alternative to hunting and slaughtering pigs. Perhaps humans should reconsider the process.

"Pork producers have become proactive with incentives to better a job that benefits the industry and consumers," said Gene Pirelli, Emeritus Professor at Oregon State University who, for 40 years, worked in OSU's animal sciences department.

Professor Pirelli grew up on a farm and says that the treatment of pigs, both on farms and in the pork industry, is far better than it was 50 years ago. During his line of work he found it necessary to remain neutral when dealing with producers because once he started reporting pig farms he would never be allowed to visit another. To address cruelty, instead of taking one side over another, he found better results by asking for a meeting between the local humane society and the producer/farmer. From those meetings, he could nudge the farmer into understanding that better treatment would actually improve income. He would stress that cruelty to pigs just does not make economic sense, not to mention the brutality inherent in using outdated methods. 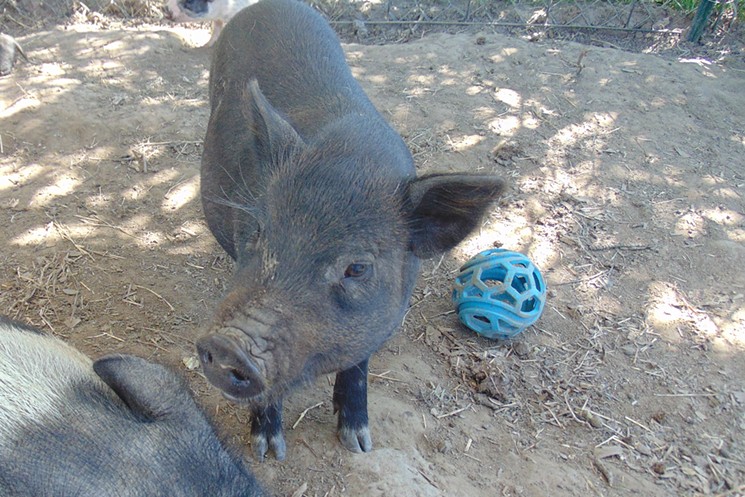 The Sealy location is just temporary, but the pigs (and foals, calves and crias) are benefiting from some new housing that was recently constructed. Now rescue organizer Meagan S. is in search of a small space that will keep more than 100 bags of feed high and dry. Meagan says they're holding off on larger projects until they can find their forever farm.

For more information about Houston Mini Pig Rescue, visit houstonminipigrescue.org or facebook.com/houstonmpr.
KEEP THE HOUSTON PRESS FREE... Since we started the Houston Press, it has been defined as the free, independent voice of Houston, and we'd like to keep it that way. With local media under siege, it's more important than ever for us to rally support behind funding our local journalism. You can help by participating in our "I Support" program, allowing us to keep offering readers access to our incisive coverage of local news, food and culture with no paywalls.
Make a one-time donation today for as little as $1.