Best Bets: Descendant, Films from Iran, and Blues in My Coffee

DACAMERA welcomes the Miguel Zenón Quartet to to the Wortham Theater Center. Photo by Adrien Tillmann
It’s a new year, so why not check out some new things? This week’s list of best bets is offering a lot of newness – first looks at new music and dance works, the Houston premiere of an acclaimed theater show, and even a screening of a film that was lost for more than 30 years. Keep reading for our picks of the best of the best.

Musiqa will open 2023 with New Year, New Music, New Movement, a collaboration with Houston Ballet II which will be performed at The MATCH on Friday, January 20, and Saturday, January 21, at 7:30 p.m. The program will consist of Houston Ballet Principal Jessica Collado’s Papillion and the world premiere of Corps de Ballet dancer Madison Russo’s Spina, as well as premieres from two of Musiqa’s artistic board members, Pierre Jalbert and Karim Al-Zand. Jalbert will present the Houston premiere of the decet All Is Now and Al-Zand will contribute several piano works from his Pattern Preludes, Book 4, for which Musiqa will welcome Calogero Di Liberto. The Italian pianist will also stick around to play selections from György Ligeti’s Musica ricercata, a collection of piano works composed between 1951 and 1953, which is considered “one of the most important work from this period.” Tickets for either concert can be purchased here and are pay-what-you-can with a suggested price of $35.

A “love letter to writing and literature" comes to 4th Wall Theatre Company on Friday, January 20, at 7:30 p.m. with the opening of the Houston premiere of Adam Rapp's The Sound Inside. The 90-minute, one-act play will see co-founder of 4th Wall, Kim Tobin-Lehl, playing the role of Bella Baird, an isolated writer-professor who forms an intriguing relationship with a student, Christopher, played by Christian Tannous. New York-based K. Lorrel Manning, an award-winning multi-hyphenate in town to direct the production, recently told the Houston Press that the play “challenges the theatrical form, and I also like the idea of a novel/novella coming to life on stage,” adding that “it's kind of a mystery that will leave you with a lot of questions." Performances will continue at 7:30 p.m. Thursdays through Saturdays and 3 p.m. Sundays at Spring Street Studios through February 11. Tickets can be purchased here for $17 to $53.
Five years before the end of slavery, the Clotilda – the last known slave ship to arrive in America – landed on the shores of Alabama. Though the importation of people for enslavement had been illegal for more than 50 years at that point, a Mobile businessman bet he could do it without getting caught and did. On Saturday, January 21, at 2 p.m. the Houston Museum of African American Culture and Art League Houston will present a free screening of Margaret Brown’s film Descendant, which “tells the entwined stories of the search for and salvaging of the Clotilda” as well as “the experiences of those people’s descendants, many of whom live in Africatown, Ala., an enclave north of Mobile.” Following the screening, Letitia Huckaby will be on hand for an artist talk to discuss her own work on the subject, which is currently included in HMAAC’s “Negative Women: Four Photographers Questioning Boundaries” exhibit also closing Saturday.

The Museum of Fine Arts, Houston will open the 30th Annual Festival of Films from Iran on Saturday, January 21, at 7 p.m. with a “noteworthy example of a strain of Iranian cinema that the Ayatollahs ensured would be cut off at the knees,” Mohammad Reza Aslani’s 1976 film Chess of the Wind. The “fevered melodrama,” detailing “bourgeois decay,” was screened twice and then banned, lost, and eventually found more than 30 years later. The film’s “double-dealing handmaiden,” actress Shohreh Aghdashloo, will appear during opening night of the festival, which will continue with films like Holy Spider, featuring Zar Amir-Ebrahimi (winner of the Cannes Best Actress award), and a restoration of the 1984 film The Runner, followed by a live Zoom Q&A with actor Madjid Niroumand. Tickets for each of the six screenings at the MFAH can be purchased here for $8 to $10, and additional screenings will be held at Asia Society Texas Center and Rice Cinema through February 5. 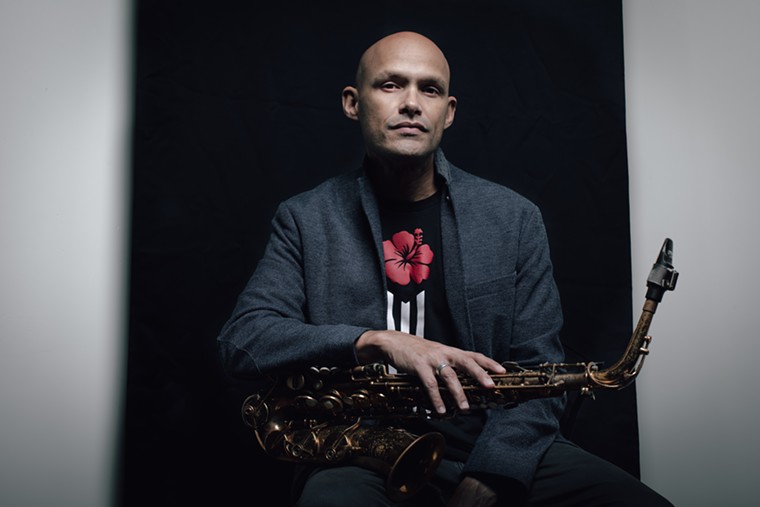 Miguel Zenón leads his quartet on Saturday at the Wortham Theater Center.
Photo by Adrien Tillmann
Alto saxophonist Miguel Zenón “carved out a unique path for himself as an interpreter of the music of his native Puerto Rico through the lens of cutting-edge, acoustic jazz,” a composer of work that “has long been characterized as straddling the traditions of American jazz and Latin American idioms, and those of tradition and innovation.” On Saturday, January 21, at 8 p.m. DACAMERA will welcome Zenón’s quartet – comprised of Zenón, drummer Henry Cole, bassist Hans Glawischnig and pianist Luis Perdomo – to the Wortham Theater Center, where Houstonians will get a chance to hear music from Música de Las Américas, Zenón’s latest (and Grammy-nominated) album, which “pays tribute to the diverse indigenous cultures found throughout the American continent while also examining their encounters with European colonists.” Tickets can be purchased here for $37.50 to $67.50.

Two friends, Walker and Alonzo, both Black men, sit in a Starbucks drinking coffee. In short order, both meet women that catch their eye. Walker’s attention is stuck on a young white woman, a classical flutist. For Alonzo, it’s a striking Black woman, an NYU professor who just happens to be Walker’s ex. And so starts Blues in My Coffee, a play written and directed by Ted Lange that explores not only relationships but the political and racial climate in the U.S. Though famous for his role on “The Love Boat,” Lange has more than two dozen plays under his belt and has said that in his writing, he tries “to educate audiences on the history of America and of the Black experience in America.” The Ensemble Theatre will present a reading of the play on Sunday, January 22, at 6 p.m. as part of their Celebrate the Creative Journey Series. Tickets for the play reading can be purchased here for $10. 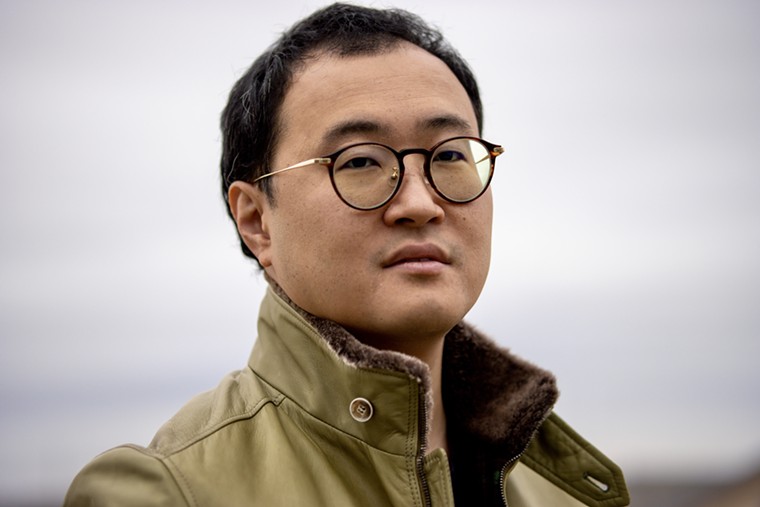 Matthew Salesses joins Yiyun Li as part of Inprint's 2022/2023 Inprint Margarett Root Brown Reading Series.
Photo by Grace Salesses
On Monday, January 23, at 7:30 p.m. Inprint will welcome authors Yiyun Li and Matthew Salesses to Congregation Emanu El as part of the 2022/2023 Inprint Margarett Root Brown Reading Series. Li most recently authored The Book of Goose, named by Time as one of the must-read books of 2022, about the “obsessive friendship” between two teens “in rural 1950s France in the grim aftermath of World War II.” Salesses, a University of Houston Creative Writing Program grad recently released the Linsanity-inspired The Sense of Wonder, which has been described as “a remarkable feat of artistic prowess that somehow blends the themes of K-drama with the spectacle of sports drama in a way that resets our frame of reference for the Korean American experience.” Both will read from their new books, and then engage in a conversation with Brenda Peynado before ending the evening with a book sale and signing. Tickets can be purchased here for $5.

In 1938, the parents of 14-year-old Lisa Jura “were able to get her a seat on the Kindertransport—the evacuation of Jewish children from Nazi-occupied Europe.” Finding herself “separated from her family and living with dozens of other young Jewish refugees in a hostel on London’s Willesden Lane,” Jura “clung to music.” On Tuesday, January 24, at 6:30 p.m. Holocaust Museum Houston and the USC Shoah Foundation will present The Children of Willesden Lane, a one-woman performance by concert pianist Mona Golabek, Jura’s daughter. Adapted from a book written by Golabek, the work “is a daughter’s tribute to her mother, a portrait of Europe embroiled in world war and a testament to the power of music during dark days.” You can register for the free event here.
KEEP THE HOUSTON PRESS FREE... Since we started the Houston Press, it has been defined as the free, independent voice of Houston, and we'd like to keep it that way. With local media under siege, it's more important than ever for us to rally support behind funding our local journalism. You can help by participating in our "I Support" program, allowing us to keep offering readers access to our incisive coverage of local news, food and culture with no paywalls.
Make a one-time donation today for as little as $1.