Conan Proves He's the Late Night Host of the People 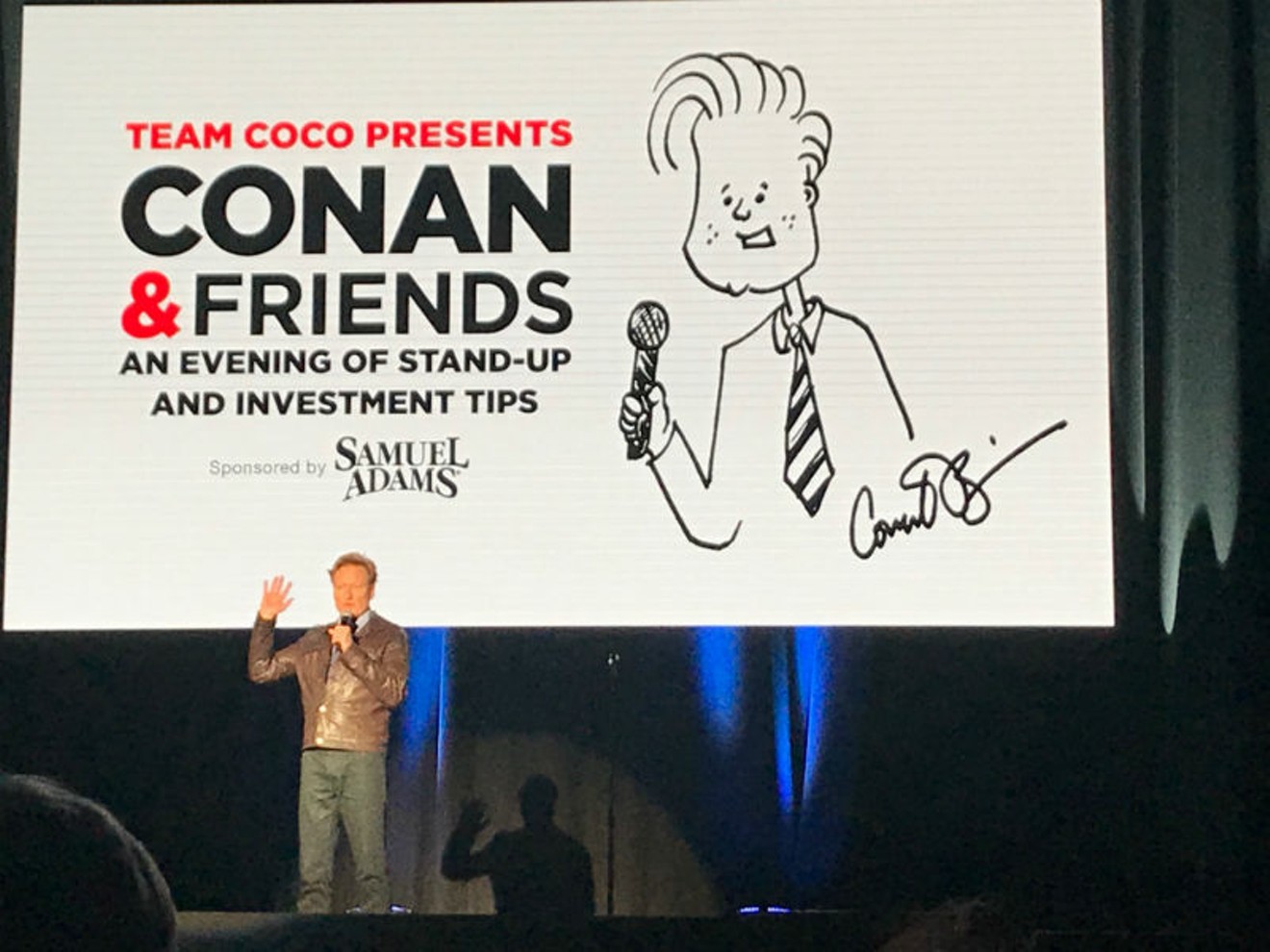 Conan O’Brien is solidifying his reputation as “late night host of the people” on his current 18-city tour, which stopped in Houston last night. Traveling with a quartet of proven comics, all of whom have received career boosts from performing on O’Brien’s TBS talk show, the tour is billed as Conan & Friends. The “friends” ostensibly refer to those comedians, but might also be O’Brien’s devoted fan base. Lots of them showed at Revention Music Center last night for two hours of hilarious bits, honest talk and some genuinely touching moments.

The night began with Flula Borg, the German actor (Pitch Perfect 2, recently seen on NBC’s The Good Place) and comedian whose digital comedy work (an area O’Brien is shifting toward with the revamp of his own late night show) has nearly 100 million views. After his set, Borg led the audience in a chant of “Conan! Conan!” and the man of the evening appeared, dressed in slacks and a leather jacket, what he calls his “hip biology teacher” look. Borg turned the mike over to O’Brien for his monologue, but would reappear throughout the night, working as a sort of Andy Richter stand-in and O’Brien’s sidekick for the evening.

“How the hell are you Houston?!” O’Brien asked and, within his first few sentences, singled out an audience member for some playful banter. Within three minutes he’d shaken hands with two audience members. He told us the whole reason for doing the tour was because he enjoys meeting the fans and having moments with them everywhere. Except for one city. 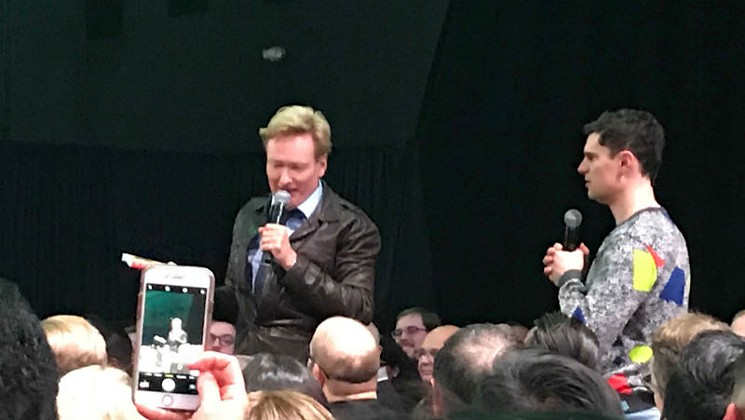 “Let me tell you something. We’re traveling this country right now and they offered me a shit ton of money to go to Dallas and I said, ‘Fuck that!’”

“They showed me a suitcase filled with millions of dollars if I would just fly over Dallas. And I said, ‘No fucking way!’ I flew nine hours around Dallas! I went up into Canada to avoid the stink of Dallas!”

“Of course, let’s be honest,” he admitted. “When I go to Dallas, I’m going to have a very different act.”

The balance of his set was a reminder that, while he loves his job, he doesn’t take it too seriously. He says his job is to talk to celebrities “and say anything that will make them comfortable.” He told stories about real stuff that happens when the cameras are off or nowhere to be found and the crowd lapped it up. Before he turned the night over to the stand-up sets he took aim at Houston, saying he was honored to play “in the great Revention Hall. What the fuck does that mean?” What is revention? Does anyone even know? It sounds like a procedure. I had a revention on my gallbladder.”

Fans of the show were familiar with each act, but it was nice to see them live, working Houston into their bits and seemingly having a good time. Taylor Tomlinson followed O’Brien’s set and the crowd responded enthusiastically to her time, which hinged on dating, her family and the friends of hers who are trying to figure out adulting while she is forging a renowned comedy career.

James Veitch was next up. His set uses clever visuals for anecdotal humor. Possibly his best known bit is duck related, but last night he shared some e-mail related stories that had the crowd in stitches. Ron Funches then followed. Possibly the best known of the comics on the tour, thanks to his TV series Undateable, a growing resume in movie work and his championship turns on @midnight, his set moved from observational humor to a hilarious and touching story about his teen-aged, autistic son. It was a perfect ending for a night filled with heartfelt but also very funny moments.

Personal Bias: What do you ask one of the great late night talk interviewers if you have a chance to ask him a question? It’s a quandary I found myself in when I shot my hand into the air during the Q&A session that followed the show proper and was actually selected. I began and O’Brien quipped, “I can’t hear you sir through your beard. I’m not criticizing, you have a thick, man’s beard.”

I never got to the question because O’Brien took the ball and ran with it and ultimately told us how Houston and a visit here played a critical role in his life. Every Conan fan from Houston knows the local NBC affiliate relegated Late Night with Conan O’Brien to the small hours of the morning back in its infancy. O’Brien went on a campaign to have the show moved to the time slot behind The Tonight Show and the crusade led him here to do some of the show’s funniest bits, including a middle-of-the-night tour of the Bayou City, chatting it up with its night owls, one of the first signs that his show’s strength would be the give-and-take he has with real life people all over the world.

The show was pushed back to the hours where cheap TV commercials reign and that’s how Hilton “That’s a Fact, Jack” Koch got on O’Brien’s radar. Conan invited him to New York City to work with a team of advertisers to spruce up his ads.

“I’m doing a remote there and there’s a woman in the room and I started chatting with her – boom! Married her,” he said. “I met my wife, who I love and I adore, and I have two of the best kids in the world, because – Houston!”

The Crowd: “This is probably the biggest audience in Houston I’ve ever performed in front of, with the least amount of black people,” Funches said.

Random Notebook Dump: One of the nicest moments came when an audience member and big fan thanked O’Brien for being her dialysis buddy.

“I just wanted to tell you I’ve had dark days sitting in dialysis but being able to watch your videos, watch your comedy and you being able to give me laughter, has helped me tremendously,” she said, which earned rousing applause from the audience and a hug and some inspirational words from Conan.
KEEP THE HOUSTON PRESS FREE... Since we started the Houston Press, it has been defined as the free, independent voice of Houston, and we'd like to keep it that way. With local media under siege, it's more important than ever for us to rally support behind funding our local journalism. You can help by participating in our "I Support" program, allowing us to keep offering readers access to our incisive coverage of local news, food and culture with no paywalls.
Make a one-time donation today for as little as $1.