SNL Helped Dan Crenshaw Pretend to be a Statesman 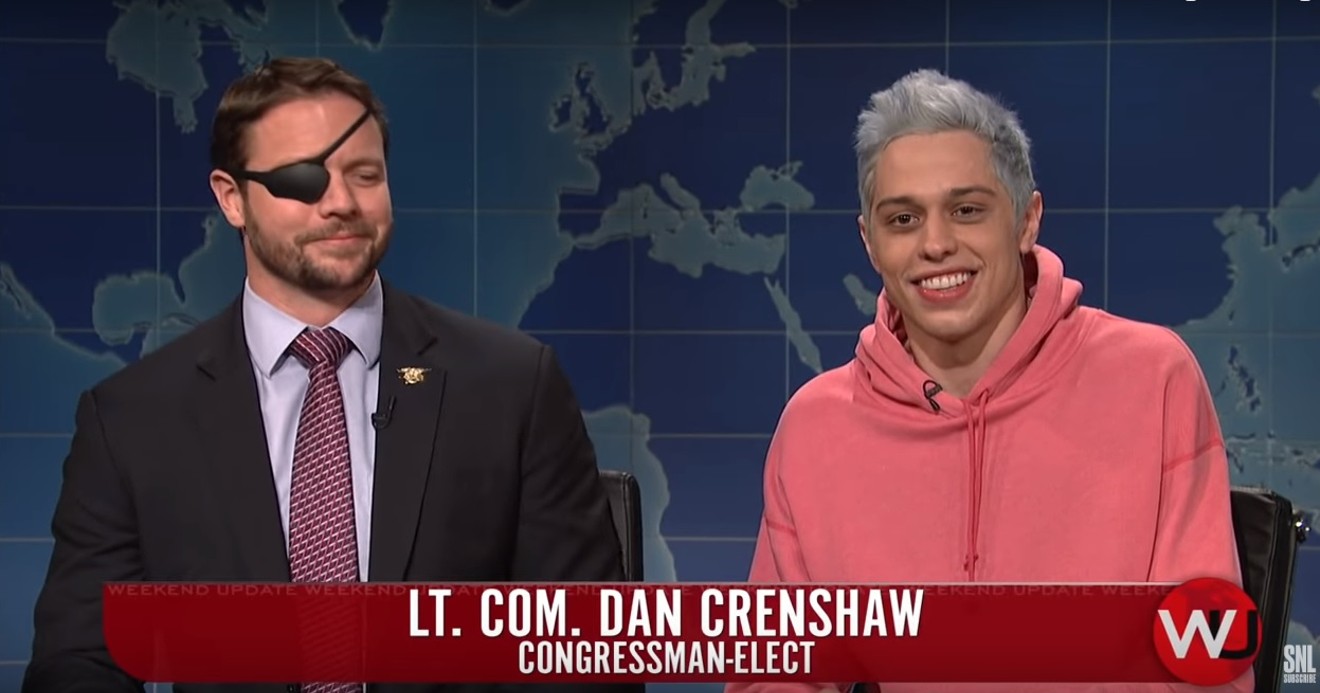 In response, Crenshaw got an apology and an appearance on the show. There, he took some jabs at Davidson, and it was admittedly pretty damned funny. His delivery was a little stilted, but it was at least as good as the dad jokes his opponent told in his ads.

More than that, Crenshaw got a non-stop tongue-bath from the media. He was seen as this reasonable middle ground bringing civility back to politics. He was applauded for saying he thought Trump should turn down the divisive language “sometimes,” urging us to not politicize comedy or attack someone’s core and just in general acting like an adult after being wrongly attacked. USA Today called him a rising star, a possible unifier who could bridge the gap in our splintered county.

Dan Crenshaw is no unifier. He was an admin for a Facebook group that happily pushed wild conspiracy theories like Pizzagate and promoted white supremacist rallies, though Crenshaw said in a statement that he never actually posted on the page. He believes life starts at conception and is fervently anti-choice up to and including spreading misinformation about abortion laws in other countries. He makes no mention of any respect toward women and their reproductive rights save that they are unimportant compared to that of a fetus.

He’s one of those agitators who pretends that free speech is in danger because a few college students protest speakers on campus, fanning the flames of a favorite conservative boogeyman. He wants to repeal Obamacare... that thing that many disabled people rely on to live. He loves the Wall and he spends a good chunk of the Issues page on his website insulting the left openly, calling them thugs.

In short, he is a completely run of the mill Republican who got a cookie because he occasionally thinks Trump’s madness worth calling out and he acted professionally after an unfair jab from a comedian who probably should have been fired after he joked about messing with his fiance’s birth control. These are things any reasonable politician is actually supposed to do, and it’s telling of how dismal the Republican Party has become that basic public relations makes someone like Crenshaw look like some sort of political wunderkind. Until Davidson came along, he was perfectly happy catering to the base and not doing anything to repair the gap in his laughably gerrymandered district.

I had friends who yelled at me for condemning Davidson specifically because they felt it helped get Crenshaw elected, though I honestly think the game was over when Silky Malik lost the primary. The gist was that we should let slurs against the disabled slide lest it boost targets that are otherwise deplorable.

I refuse to believe that we should. I lay all the blame right on SNL for their crappy joke and its role in elevating a mundane conservative with typically backward views of the country cosplaying being a statesman. There are many, many reasons we should keep those sorts of jokes out of our mouths. Not making martyrs out of people happy to screw up the country on a wave of the resulting goodwill is one of them.
KEEP THE HOUSTON PRESS FREE... Since we started the Houston Press, it has been defined as the free, independent voice of Houston, and we'd like to keep it that way. With local media under siege, it's more important than ever for us to rally support behind funding our local journalism. You can help by participating in our "I Support" program, allowing us to keep offering readers access to our incisive coverage of local news, food and culture with no paywalls.
Make a one-time donation today for as little as $1.