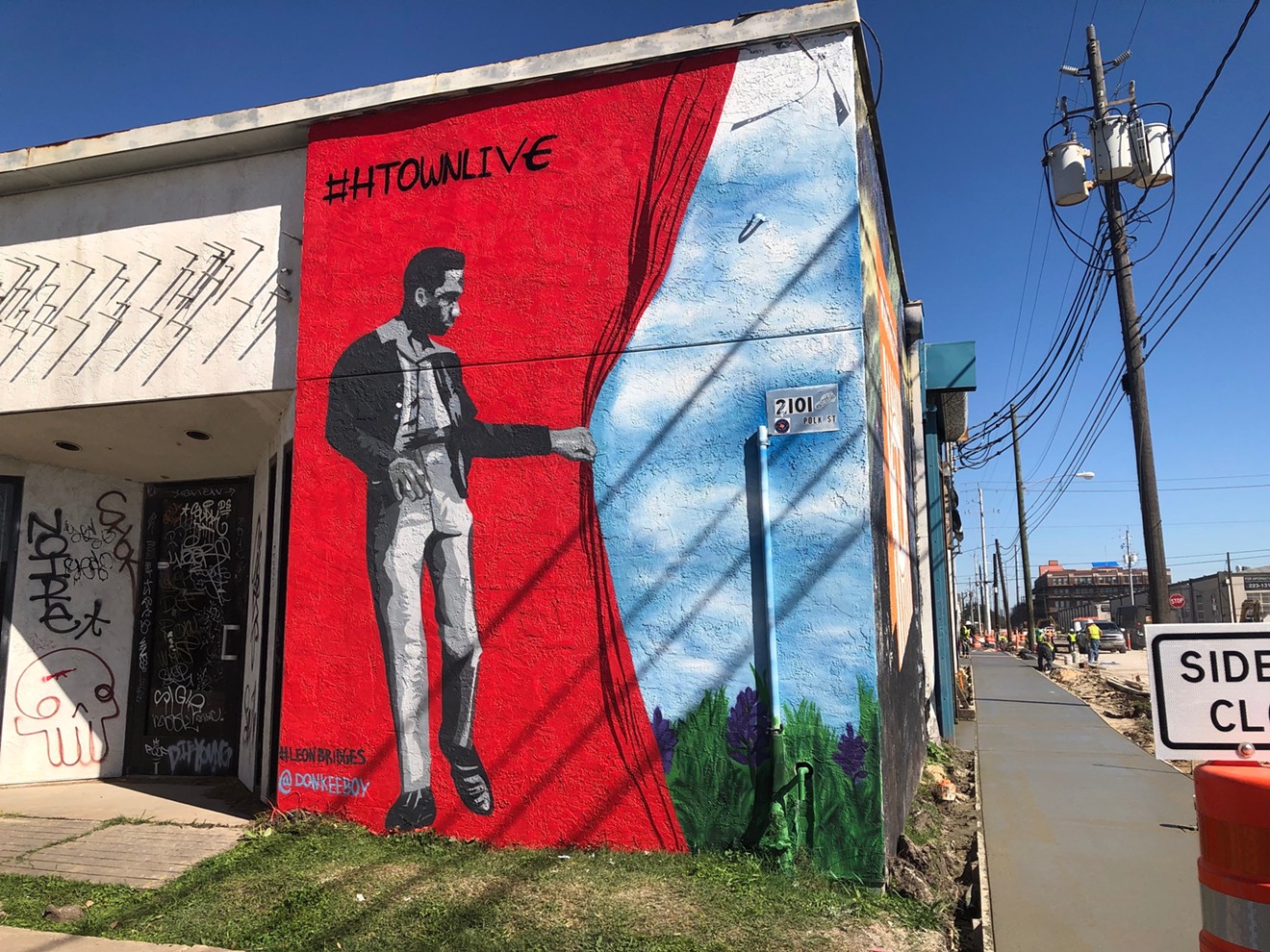 New mural of Leon Bridges by Donkeeboy sits across the street from 8th Wonder Brewery in Eado. Photo by Donkeeboy
Renowned Houston street artist and muralist Alex Roman Jr. (Donkeeboy) has unveiled his latest work of pop-art in East Downtown. The resident artist at 8th Wonder Brewery introduced a mural of Texas soul and R&B phenom Leon Bridges ahead of Bridges' April tour date in The Woodlands. In honor of the new piece, Roman will be giving away two tickets to the upcoming show via an Instagram based promotion.

Donkeeboy rose to fame in the Houston art scene thanks to his works of pop-culture-fusion — murals and smaller pieces that combine unrelated elements of popular culture to form visual and linguistic puns. Works like the now famous "PACasso" and "DJ Screw" (made with 4,379 screws) helped launch his brand in the street art scene both locally and nationally. His Eado murals like "Butt-Squiat and Warholio" and "Wonder Frida" have become defining elements of the neighborhood's bohemian aesthetic.

The Houston native now lends his talent to local institutions like 8th Wonder Brewery where he serves as resident artist, and Minute Maid Park where he commissioned a now iconic Astro's mural in the lead up to the teams 2017 championship run.

YOOOO GIVEAWAY TIME ! I'm giving away 2 tickets courtesy of @livenation to the @leonbridgesofficial concert on April 26 in honor of my new mural outside of @8thwonderbrew. To enter, just follow these steps 1. follow @donkeeboy and @8thwonderbrew 2. post a photo of the mural using the hashtag #htownlive 3. tag a friend you'd like to take to the concert Winner will be chosen 2/21 at 10am CST. Good luck!


Roman's new Leon Bridges mural sits across the street from his 8th Wonder home at 2101 Polk. The piece depicts a black and white Bridges in characteristic vintage apparel opening a red stage curtain as if preparing to perform. Behind the curtain is a quintessential Texan landscape, complete with bluebonnets growing in tall grass under a blue sky. "To me, the mural represents him playing for Texas," says Roman. "He's opening the show curtain and has Texas as an audience."

To promote both the new mural and his patrons across the street, the Donkeeboy is running an Instagram based contest to give away two tickets to Bridge's April show in the Woodlands. Fans interested in winning the pair of tickets can post a photo of the mural using the hashtag #htownlive and follow both Donkeeboy and 8th Wonder on Instagram. The winner will be announced on February 21.

Donkeeboy's recent murals include works done in partnership with Burns Original BBQ, Shipley's Donuts, and FM Kitchen and Bar. He also hosts a quarterly art show at 8th Wonder that promotes up-and-coming local artists. For more information visit his website at donkeeboy.com
KEEP THE HOUSTON PRESS FREE... Since we started the Houston Press, it has been defined as the free, independent voice of Houston, and we'd like to keep it that way. With local media under siege, it's more important than ever for us to rally support behind funding our local journalism. You can help by participating in our "I Support" program, allowing us to keep offering readers access to our incisive coverage of local news, food and culture with no paywalls.
Make a one-time donation today for as little as $1.