7 Things About Nazi and Edgelord Humor 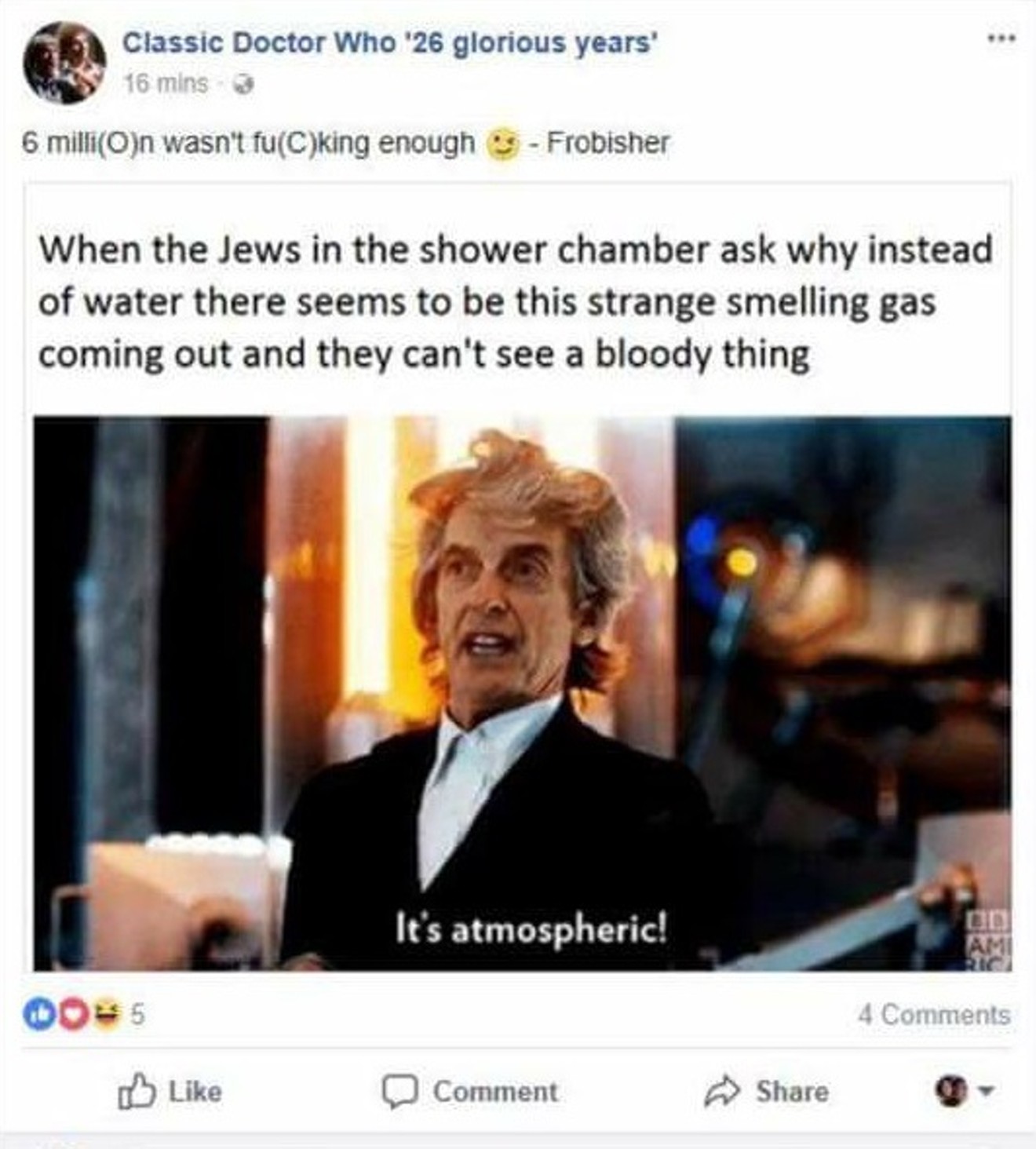 What a thing to see first thing in the morning... Screencap from Facebook
Yeah, you saw that right. Nazi humor on a Doctor Who page. A show that literally had an episode called “Let’s Kill Hitler” apparently still spawns fans and admins that think “blerp bloop gas chamber LOL.” What the hell these people get out of the show is a mystery to me.

Normally I don’t put individual yo-yos on blast anymore. I’ve been on the receiving end enough that I realize it causes more harm than good, even for terrible people. However, I was in a mood, and I decided to confront this page over this terrible, objectively racist meme. In doing so, I’ve codified the response you get when you find edgelords and “ironic” Nazis hoisted on their own petard.

1. They Realize Their Safe Space Has Been Invaded
It’s kind of fun that the people who are the most active in their denouncement of the concept of safe or regulated spaces are always creating them themselves. For all the talk of snowflakes out there, there is no one more keen to wrap themselves in layers of insulation than people who absolutely need to make Nazi jokes or who think those jokes represent some kind of edgy humor. Trust me, y’all, most of us have heard Nazi jokes before, and the reason we’re dropping in is because we knew those weren’t jokes the first time. We’re as sorry we found your SEKRIT CLUBHAUS as you are, but no one made you share a bunch of Nazi memes publicly.

2. The Mel Brooks Defense
"This is a joke" is not actually a defense. People used to put firecrackers in other people’s shoes and call it a joke. Laughter does not make toes grow back. I double-checked with a podiatrist for this article to make sure and she said, “Are you an idiot?”

A common edgelord and Nazi joker defense is that we as a society have become so easily-offended we can’t handle humor. “Mel Brooks would never be able to make Blazing Saddles today” is a pretty regular cry. Here’s the problem: you, rando on the internet, are not Mel Brooks, and your meme is not Blazing Saddles. The two aren’t in the same sphere, and until you understand WHY stuff like Blazing Saddles worked and got made in the first place you’re never going to be. It’s sort of like hardcore stoners who credit weed with creating great rock music without ever realizing none of them toked up and produced Sgt. Pepper. The problem here is not the death of humor so much as an awareness of how bad the humor being produced is.

3. The Failure to Understand Free Speech
The person who made this meme is a racist, a moron and I hope River Song meets their Nazi backsides in an alley.

That previous sentence was free speech, y’all. The right to criticize is as sacred as the right to offend. You have to understand that the right to speak does not prevent anyone else from saying, “what that dude said was some racist nonsense.” Unless they’re in a position like me, where I have professional journalistic standards to adhere to, no one is required to check and see if you’re “actually” racist. Even then, I can look at the evidence on display and say “Right, that dude’s a total racist.” Which brings us to…

4. The Paralyzing Realization That No One Cares What’s In Your Heart
All Nazis have friends, alright? They have spouses and kids and coworkers who enjoy the cookies they bring to potluck and that nice black dude at Starbucks who remembers their order. Hitler loved children. Hitler is largely the reason the anti-smoking campaigns finally got moving. Was. STILL. Hitler.

Intention is not magic. Whenever an edgelord or Nazi joker finds themselves suddenly confronted by outrage over their work, they retreat like a turtle into a shell. They didn’t mean it. They were just joking. If we could only see into their hearts… But I can’t. Telepathy isn’t real. All we have to go on is the effect of actions, and as I’ve said before, there’s no such thing as an ironic Nazi. There’s only the amount of Nazi you add to the world. Whether you meant it or not is meaningless to everyone but you.

6. The Painful “I’ve Learned My Lesson” Moment
In the event that you watch these sorts of train wrecks long enough, from the lowest Facebook admin to the highest levels of celebrity, you will get a sincere confession that the person realizes their error. That’s good. People should learn from errors.

But I’ve been in this game a long time, and one thing that I’ve learned is that most mistakes can be avoided by simply asking “Am I sure I’m not wrong in this?” beforehand. The simple act of questioning whether a joke is too far, or whether it will cause more harm than laughter, or even just whether it’s even funny at all, can save a lot of headaches. That’s the thing so few of the edgelords or the HUH HUH NAZIS crowd ever seem to get. A joke is meant to create laughter. It’s a contract between the teller and the audience.

The thing I hate to watch is someone turning their rightful roasting for a bloody Holocaust meme into “Look how I grew as a person!” It’s a reframing of the problem as a leveling-up for someone who, gosh, couldn’t possibly know that Holocaust memes might actually hurt people. What bothers me about it is the frightening lack of empathy. A whole race of people are out there this might have caused emotional agony to, but the second even the minor inconvenience of having a few dozen people report your Facebook profile happens suddenly it’s all about feelings. All these professional offenders, and every single one of them backs down the second anyone actually used to fighting real fights shows up with even mild criticism. Of course, that is actually the point.

7. The Point of the Whole Mess
Edgelord comedy and casual Nazism exists for one specific purpose. It’s the canary in the coal mine for bigots. It is designed to test the waters to see how Nazi you can be and get away with it. Not everyone out there pretending they’re the next Chris Ray Gun knows that’s their purpose, but then again, the canary doesn’t know why it’s in the coal mine either. The only real solution is to keep out of the coal mine. People who make offending others their reason for being are not your friend, and I’d certainly prefer them to stay the heck out of my fandoms.