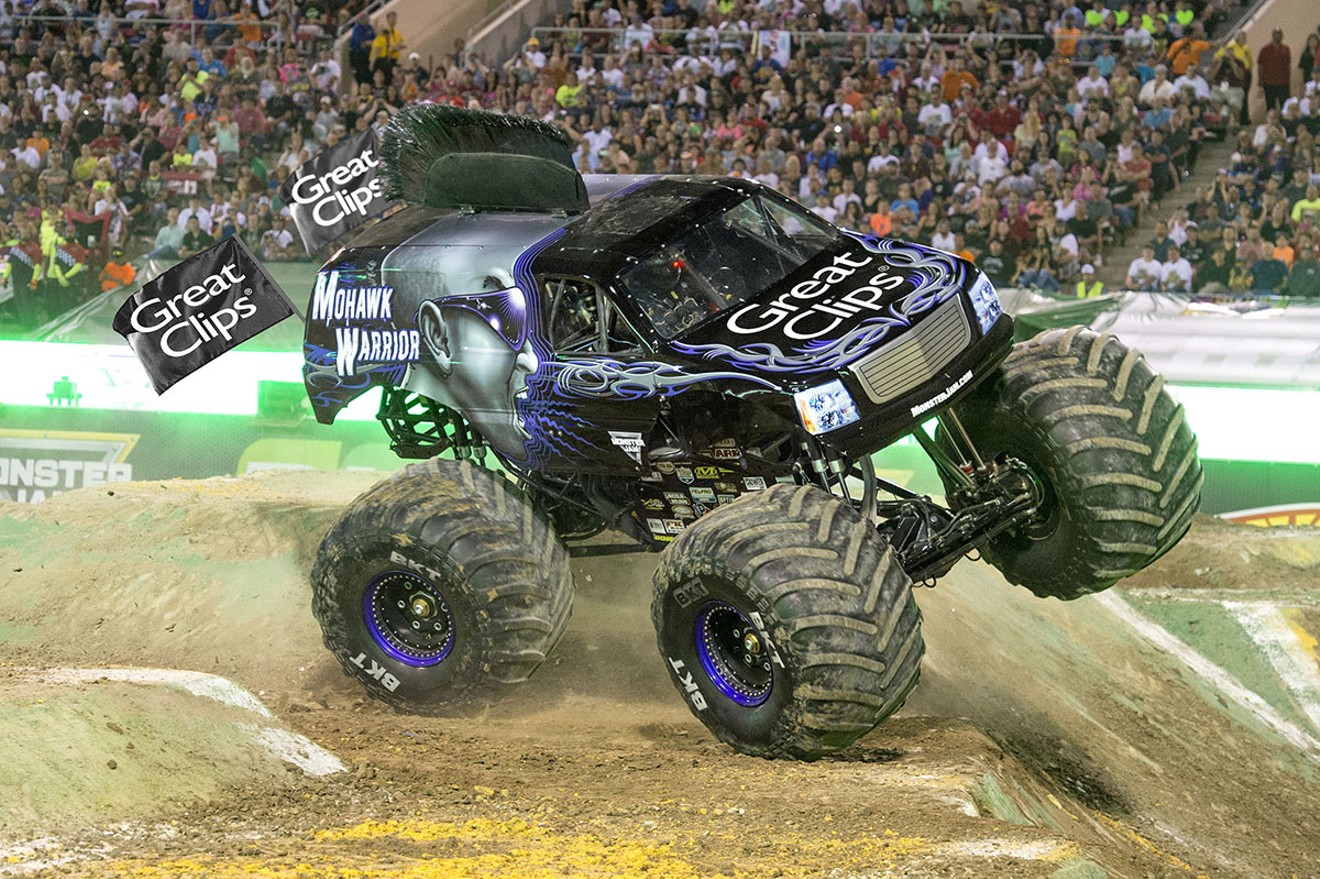 Making its way from the Mohawk Nation, it's monster truck Great Clips Mohawk Warrior, driven by Bryce Kenny. Photo courtesy of Feld Entertainment
So what exactly did happen with the estimated 500,000 cars that were flooded in Houston during Hurricane Harvey? We expect some made it over the state line to try to sell to unwitting buyers, some were crushed, and yet others were sent to the salvage yard. And who knows, we just might see a few get a pounding when Monster Jam® descends on NRG Stadium this weekend. 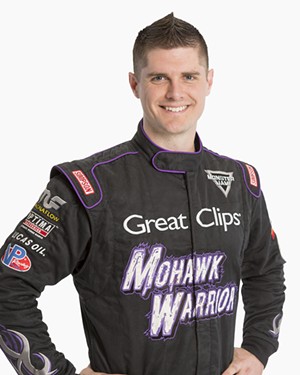 Follow driver Bryce Kenny's progress @warriorbryce on Instagram.
Photo courtesy of Feld Entertainment
"I honestly have no idea where we find the cars that we crush, but in terms of getting a little bit of vengeance on Hurricane Harvey, I would recommend that Monster Jam does everything we can to demolish a few for Houston," says Bryce Kenny, who recently started driving the monster truck Great Clips Mohawk Warrior.

Some sports match-ups are a slam dunk. When Great Clips, the 4,000-strong family of hair salons, went looking for a monster truck to sponsor last year, it was kind of a no brainer when they shone their spotlight on Mohawk Warrior. So of course driver Kenny has a mohawk — he says it's tinted purple now — and the hairstyle seems to be contagious.

The truck also sports a mohawk, and fans who come out early for the Pit Party can get in on the action too. "Basically it’s an all access pass to meeting all the drivers and seeing these 10,000-pound Monster Jam trucks up close and personal. Right by my truck we will have a team from Great Clips and we call it the crazy hair tent and they are going to be gelling kids and adults, gelling their hair into mohawks," says Kenny, adding that fans can color their mohawk with green or purple hair color.

"It’s really special for me when I come out to make my run, I look out in the stands and I see all these colorful mohawks," says Kenny. "That makes me drive so much harder."

Kenny has proven to be an aggressive driver, and he's got big plans for Great Clips Mohawk Warrior. "My background is in violent speed. Before Monster Jam I used to go 300 miles per hour in four seconds driving a top fuel dragster. That was intense speed all on concrete; that was scary speed," says Kenny, adding that Monster Jam is more "controlled chaos."

"We have every intention to come to Houston and to backflip this Great Clips Mohawk Warrior. I am new enough in this sport where I’ve had limited opportunities to make it happen," says Kenny. "I’ve been eyeing it. Assuming my truck is still able to move forward I have every intention of flipping this truck."

Since making its debut in 1982, Grave Digger — from Kill Devil Hills, North Carolina — has taken home the win in the Monster Jam World Finals Championships in 2004, 2006, 2010 and 2016.
Photo courtesy of Feld Entertainment
Kenny also has developed a reputation for being bold enough to go up against the big guys, including the Monster Jam Triple Threat Series championship winner Grave Digger. "If you look at the Great Clips Mohawk Warrior truck, it has an aggressive look. My personal style is aggressive; sometimes I’m too aggressive. Any time we line up against Grave Digger, it might still feel like a David versus Goliath situation. Grave Digger is the No. 1 globally known Monster Jam truck in the world," says Kenny. "We want to ruin his day. We’ve been pretty good at pulling out some wins and upsets out there. We all know that David eventually took down Goliath." 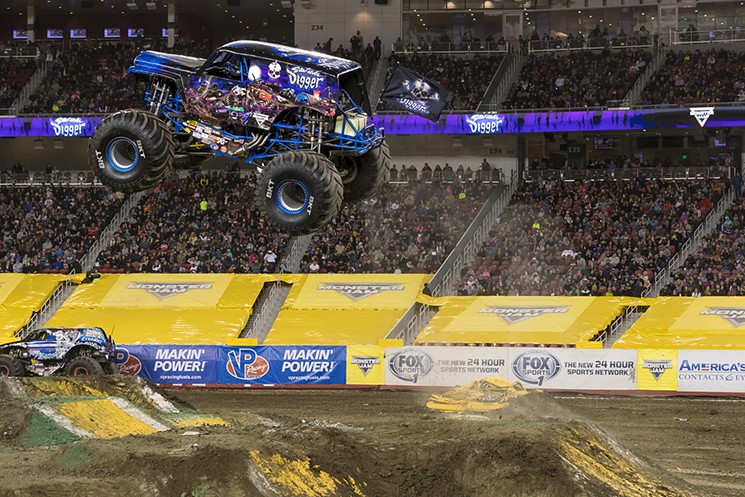 Son-uva Digger, also from Kill Devil Hills, NC, was last year's winner in the Monster Jam World Finals Championships with driver Ryan Anderson.
Photo courtesy of Feld Entertainment
"Off the bat we start with head to head racing; we have a 14 truck bracket, first one to get to the finish line wins. After we declare the winner, whoever wins the racing bracket gets 14 points. We have three competitions; every competition brings a certain number of points," says Kenny. "The ultimate winner of our tour, our season, has an automatic bid into the Monster Jam World Finals in March. Every time we hit the floor, hit the throttle, it means something."

But perhaps Kenny's favorite part of the night is the two-wheel skill competition, where fans can pick their favorites using an app from judgeszone.com. "They’ll be able to actually score all of the trucks and to really wait for that wow moment and score that one highly. That’s the part of the event that I think everyone looks forward to the most. Monster Jam, free style. Every driver gets to go out and for 120 seconds we do anything and everything. The air, the craziest stunts, the back flips, and ultimately it’s the most fun for me as a driver to go out there and go and be absolutely crazy."

Kenny says there's a bigger story out there, as there's always drama — both good and bad — as the drivers try to collect points as the season goes on. "If someone wants to get the ultimate Monster Jam experience, come out to Houston, come to @warriorbryce on Instagram, and follow our progress not just in Houston but follow us as we try to knock off all these world champions," says Kenny. "Ryan Anderson and Son-uva Digger®, Todd LeDuc and Monster Energy, Tyler Menninga and Grave Digger; these guys have won world championships before.

"Don’t just let the experience stop in Houston. Sometimes fans think, 'I’m just going to sit in the stands and watch Monster Jam trucks fly around.' They want to become involved in the sport and follow the story that gets created. Social media lets the fan become part of the overall experience."