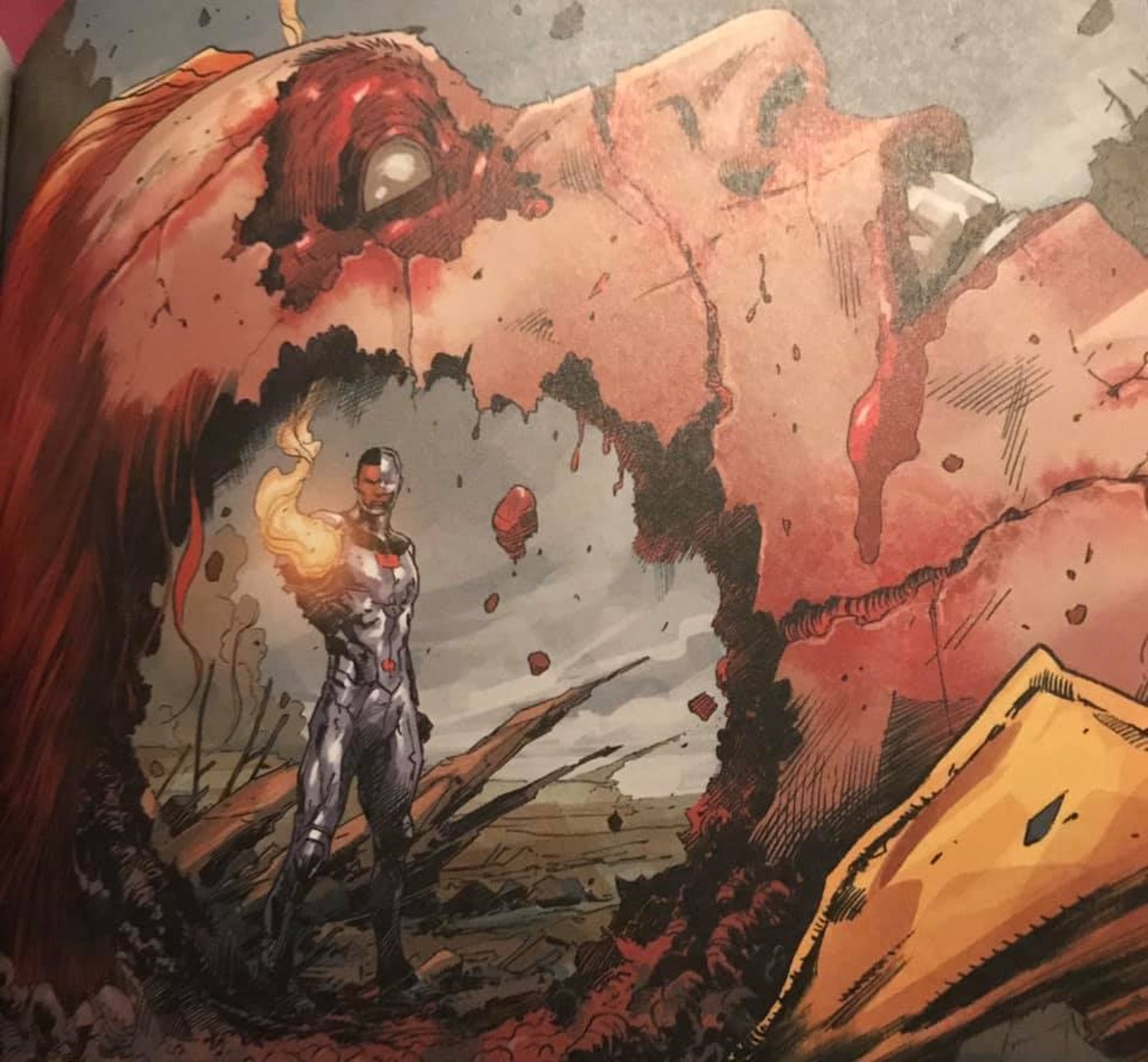 That's a big zombie. Scan from DCeased
The world needs more zombie stories like Christ needs more nails, but the DC Universe is getting its major one anyway in an admittedly stunning hardcover trade just in time for the holiday season. Welcome to DCeased.

Coming years after Marvel already did it and using the talents of Walking Dead artist Stefano Gaudinao, it does have one of the best explanations for the catalyst of the undead ever seen in comics. Darkseid is on his usual quest for the Anti-Life Equation when he kidnaps Cyborg to complete it. Due to a very bad error in judgment, aspects of Death in the form of the Black Racer are fused with Cyborg, completing and corrupting the equation so that it becomes a self-replicating virus that seeks to destroy all life. Worst thing is, not only do bites spread it, so does the internet.

Then Cyborg returns to Earth and the apocalypse gets going as the Justice League tries in vain to stop the zombie hordes that increasingly are superpowered.

Like I said, it’s nothing that Marvel Zombies didn’t already do, but DCeased is an even bleaker take on the idea. Many of the titans of the DC Universe are converted early, leading to an arms race that Superman is unable to keep up with. In a way, this actually makes for one of the greatest Superman stories in decades. The true enemy of someone as all-powerful as Superman is that he ultimately can’t save everyone. DCeased brings that message home in a heartbreaking way from first page to last, and the comic is at its best when it shows the damage the apocalypse does to the Kent family and their struggle to uphold their ideals.

Unfortunately, the rest of the book is just so cosmically numbing. So many brutal deaths, so many tearful goodbyes, so much hope that is dashed time and time again… At first it’s moving, but halfway through it’s hard to feel anything about what’s happening on the page. There are virtually no triumphs; just setups for more tragedies.

John of the Dead! Yes! I am not apologizing for that joke!
Scan from DCeased
There are some bright spots. Harley Quinn and Poison Ivy set up a jungle sanctuary in Gotham that the zombies can’t penetrate. Their fate is left uncertain at the end of the book, but they seem to be the only truly happy people left on Earth. There’s also John Constantine, who is reluctantly recruited to fight the apocalypse with magic. He is another character whose ending isn’t seen, but he’s probably the greatest hope for a sequel.

Zombie fiction, more than any other type of horror, is supposed to be a mirror to humanity. What do we see in the looking glass pages of DCeased? Mostly that what the heroes of their universe fight for cannot be achieved. Death can only be postponed and there is no saving the day. The people who survive hope because otherwise they would die, but the hope feels so pointless on the other side of so much bloodshed.

There just doesn’t seem to be anything at the end of DCeased. Not every story has to have a happy ending, but it also shouldn’t be one long murder scene followed by a funeral. The moral of this story is “don’t even try.” It seems a weird point in the world to be selling that idea. The catharsis of the grave is a real downer in such troubled times.

DCeased is available November 26.
KEEP THE HOUSTON PRESS FREE... Since we started the Houston Press, it has been defined as the free, independent voice of Houston, and we'd like to keep it that way. With local media under siege, it's more important than ever for us to rally support behind funding our local journalism. You can help by participating in our "I Support" program, allowing us to keep offering readers access to our incisive coverage of local news, food and culture with no paywalls.
Make a one-time donation today for as little as $1.