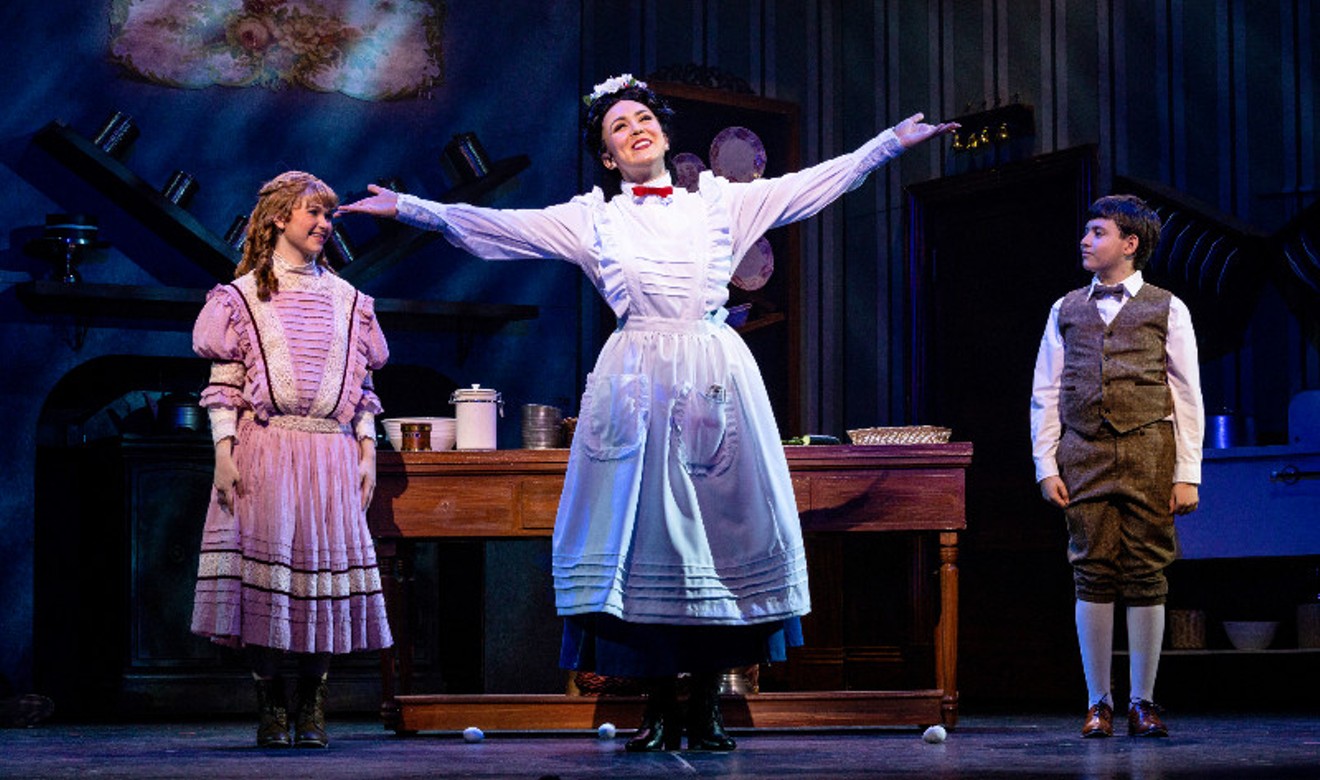 Abbilyse Caudle as Jane, Olivia Hernandez as Mary Poppins and Daniel Karish as Michael in the TUTS production of Mary Poppins. Photo by John Burrows

Theatre Under the Stars brings us the brightest present of the season, its production of Disney and Cameron Mackintosh's Mary Poppins (2004, West End world premiere; 2006 Broadway). She's been here before during national tours, but TUTS supplies a new shine to this glimmering musical bauble.

This ornament for Christmas season seems to glow brighter than ever. Using a raft of Broadway talent, numerous local theater vets, and sprightly new choreography and costumes, this old gal radiates showbiz allure and pure unadulterated entertainment. If you and your little ones have never had the magical pleasure of her company, this is the production to see.

Adapted from the classic Disney film and the stories by P.L. Travers, the musical doesn't have those iconic dancing penguin waiters or those run-away carousel horses, but it has plenty of its own animation in the spirited dance sequences, the moments of stage magic, and those hummable earful songs by the Sherman Brothers, which have been augmented by the work of George Stiles and Anthony Drewe that sound exactly like the Shermans'. Part English panto, music hall, and pearly king and queen, the music is essential to this musical's endearing quality. It dazzles with inventiveness and ingenuity, perfect for this story of this most magical nanny. The fit is flawless, and the up-tempo “Anything Can Happen” is as good as anything from the film.

While not especially faithful to the movie, the show morphs into an exceedingly crafty Broadway musical. The movie's astonishing make-believe has been brought down to earth with lots of dancing and singing, which is live theater's best special effect anyway.

And what a charmer Mary becomes under the purity and creaminess of Olivia Hernandez. She was wonderful as Laurie in TUTS' Oklahoma (2018), and her wonder continues undiminished as Miss Poppins. No nonsense, playful, crisp and starchy, and using that incredible crystalline soprano, she's energetic and bright as a six-pence. Who wouldn't want her as a nanny? Hire her now.

She is matched by pro song-and-dance man Matt Loehr as Bert, chimney sweep extraordinaire. He almost cartwheels across the stage in the exuberant “Step in Time,” surrounded by a chorus line of grimy dancers twirling and stomping their brushes over the London rooftops. Choreographer Jessica Hartman supplies her own type of magic in the many dance numbers, like “Jolly Holiday,” set in a park with its dancing statue, or the exuberant “Supercalafragilisticexpealidocious,” a spelling bee the likes of which you've never seen. Julie Kramer's direction is storybook, swift and smooth.

The musical's book by Julian Fellowes (Downton Abbey) drops the movie's suffragette subplot and relegates Mrs. Banks to a more supporting wife role, as a former actress whose stern husband won't allow her back on the stage (Courtney Markowitz). She gets her own aria in “Being Mrs. Banks,” and sings it lovingly. Husband George (Bret Shuford) is all “Precision and Order,” whose officious posture will soften considerably under Mary's wry ways. The frazzled cook Mrs. Brill is etched in cotton candy by Cathy Newman.

Look closely and spot a musical Houston Who's Who: Paul Hope, Susan Koozin (all “Treacle and Brimstone” as sadistic Miss Andrew, then warm and nostalgic as the Bird Woman (“Feed the Birds”), Holland Vavra, Raven Justine Troup, Austin Colburn, Aisha Ussery, Miles Marmolejo, Labraska Washington, Sophia Clarke, and those two adorable tykes Daniel Karish and Abbilyse Caudle, as Michael and Jane, both youngsters with a credit list as long as your arm.

Timothy R. Mackabee's set design pays homage to faded lithographs of yore, while Colleen Grady's colorfully extravagant costumes display an industrial-sized pallet of Necco wafers. Candy-striped, with plaids on plaids, or fitted out with Edwardian bustles, they are their own show, and they are fabulous.

But what's a Mary Poppins without flying? ZFX congers the magic with eye-popping wonder. During “Let's Go Fly a Kite,” Mary alights by kite, and her final exit is the showstopper from heaven. Divine. I swear she smiled just at me as she flew over my head. Perfect...just like the show. This present is a keeper. Thank you TUTS and company. 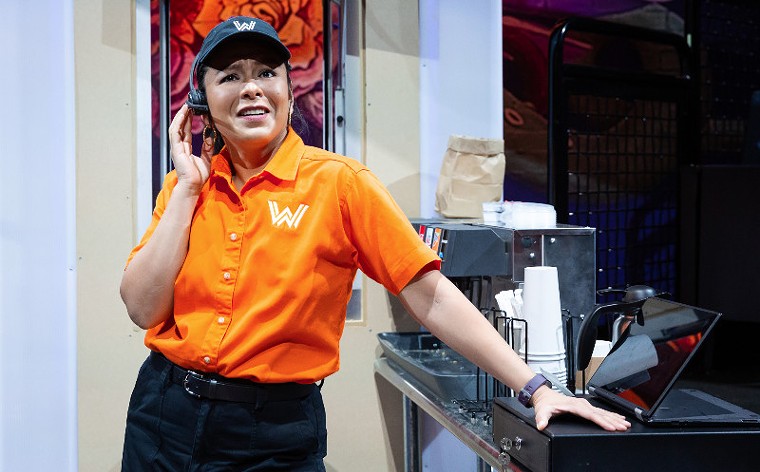 Briana J. Resa is the heart of this play at the Alley.
Photo by Lynn Lane
Fast Food at the Alley

Except for Briana J. Resa's tour de force performance in Issac Gómez's world premiere What-a-Christmas!, the only lasting impression is the aroma of grilled hamburger that wafts through the Alley Theatre's Neuhaus Theatre. In the first minutes of the play, working the Christmas Eve shift, Margo (Resa) fries up burgers and onion rings in 90 seconds for an annoying drive-through customer at “an iconic fast food chain” in Houston. The burgers sizzle and smoke, and the sweet meaty smell lingers throughout the eighty-minute play. I smell it still. But I've forgotten the play.

As a replacement for the Alley's more adult, solo holiday shows staged downstairs in the intimate Neuhaus (Santaland Diaries and Fully Committed), What-a Christmas! is slight and inconsequential. It possesses no bitch quality, no snark, no gay snap, not much of anything. It has no character. It riffs on A Christmas Carol, but adds nothing to it. As limp as hours-old onion rings, it's been sitting under the heat lamp for far too long.

At this orange-inspired fast food joint, detailed to a fault by designer Kevin Rigdon with working grill and deep fryer, soda station, prep counter, and drive-through window with its video screen of prospective customers, Margot slaves away. She asks for this shift every year. It doesn't bother her that she can't go to parties with her relatives. She likes it like this. Her reasons for this decision will be made apparent later in the play, but we're a few steps ahead of her; we're always a few steps ahead. Cranky, overworked, and underpaid, Margot is all business, whipping up burgers and cokes to the demanding ranting customers outside her window. It's a lovely comic touch that she can decipher their static-filled squawks.

After a creepy encounter with the Grumpy Santa figure on the counter, she's haunted by stoned former employee Jackie Marley, who inhabits her body to talk smack to her. Resa's amazing physical transformation in voice and movement onto this sassy spirit is a beauty to behold. This R-rated contemporary take on Dickens is going to be fun, we think, irreverent and knowing. The feeling doesn't last long. It's crushed under leaden exposition that comes out of nowhere. At least Scrooge had dealings with Bob Cratchit, his nephew Fred, and members of the community to give him a miserly backstory. Margot has none except large swathes of explicit dialogue to fill in her backstory. Her story is forced upon her.

Jackie warns her that she'll be haunted by three ghosts. One by one, they possess her and teach her Hallmark card sentiments, like Be Kind, Be Good, et cetera. Cowboy Harry is the first, who teaches the homeless man outside to two-step in a gratuitous sequence that, at least, shows off Resa's tasty dance moves. The dancing gets appreciative applause. Pop diva Selena is the second ghost, and this shows off Resa's pipes, but doesn't add anything distinctive to her story. Selena warns that “She” is coming. Margot can't figure this out, but we can. We know who's going to show up. We also guess why.

Margot, a.k.a. Margarita, sees the light without much drama or conflict. In a flash she has been reclaimed, quits her job, decides to go back to school, follow her dreams and be a nice person. Simple and easy, but not very convincing. Be true to yourself is Gómez' sampler message.

The play is saved by Houston Theater Award-winning Resa (Empanada Loca), who has stage presence for days, whether boot-scooting, sassing with Jackie, or wailing like a pop diva. She supplies this one-woman play with its only heart. She is light years ahead of the play. There are wispy references to Margot being Hispanic, but these are so illusive and unenlightened she might as well be Japanese.

The Alley production is high gloss, from Dan Jones' spirited lighting, Rigdon's Belasco-inspired set, to KJ Sanchez' smooth direction, although '60s theater-in-the-round has had its day and it's time for it to go. When Resa turns away to another section of the theater, we lose her expressive face and her lines go muffled.

But everyone has worked very hard to bring What-a-Christmas! to the stage, especially Resa whose performance is a special kind of Christmas cheer.

What-a Christmas! continues through December 30 at 7 p.m. Wednesdays through Saturday, and 2 p.m. Saturdays and Sundays at the Alley Theatre, 615 Texas. For more information, call 713-220-5700 or visit alleytheatre.org. $45-$64.
KEEP THE HOUSTON PRESS FREE... Since we started the Houston Press, it has been defined as the free, independent voice of Houston, and we'd like to keep it that way. With local media under siege, it's more important than ever for us to rally support behind funding our local journalism. You can help by participating in our "I Support" program, allowing us to keep offering readers access to our incisive coverage of local news, food and culture with no paywalls.
Make a one-time donation today for as little as $1.