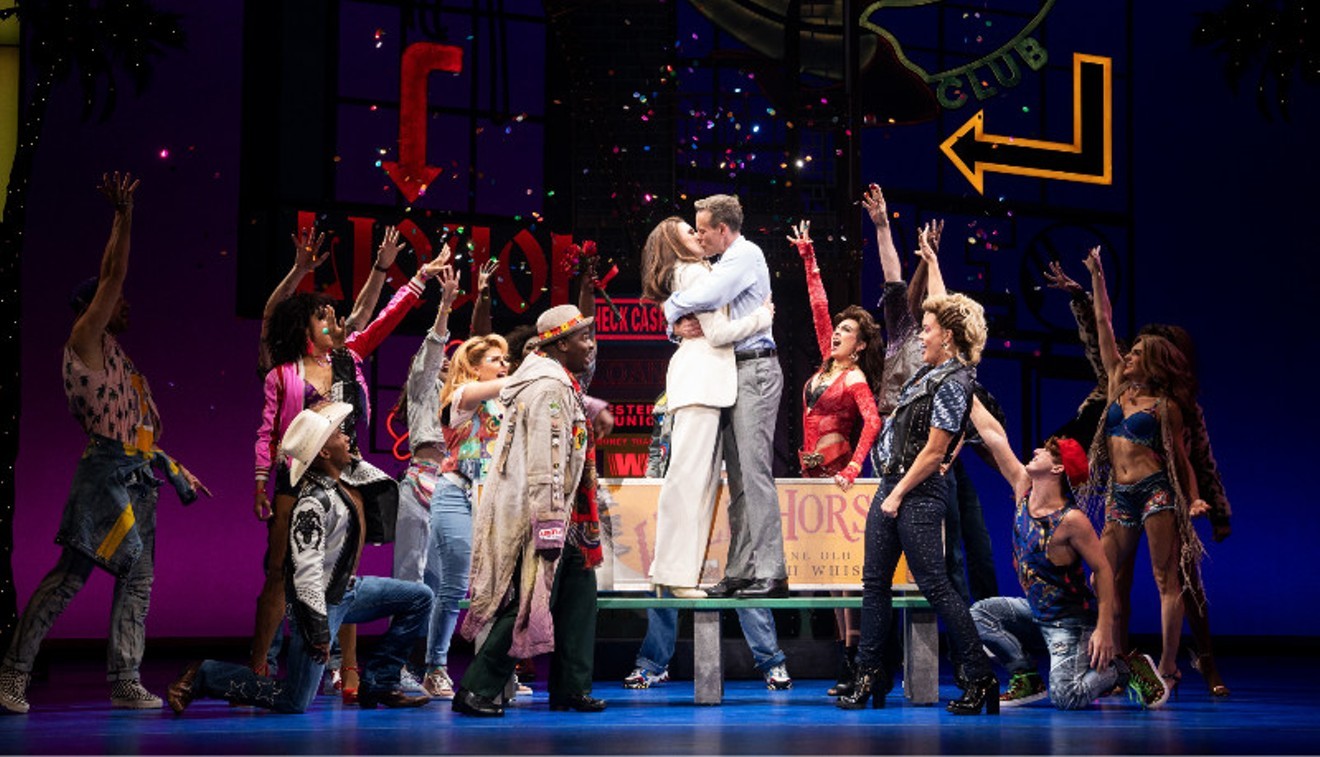 A fun show with a hefty serving of nostalgia. Photo by Matthew Murphy for MurphyMade
Let’s be honest, no one goes to see the musical version of a beloved movie for the songs.

No one really wants to hear Dorothy/Tootsie sing about wearing a dress, or Veronica croon about those nasty Heathers, or the mean girls trill odes to their leader Regina George.

They want nostalgia. To reclaim a little piece of their young adult selves from back when they first saw and fell in love with the film.

In the case of Pretty Woman: The Musical, they want to remember a time when there was nothing problematic about a hooker named Vivian with a heart of gold, hired by cold-hearted capitalist, Edward, to be his lover/social companion during his one-week business trip to Beverly Hills. A trip in which he miraculously gives up all his money-grubbing ways out of love for her goodness, rescuing her in the process.

Folks want to be able to swoon at an improbable rom-com and not think too hard about it.

Sure, why not? We’ve all had a hard couple of years. Have fun, I say. As long as we all agree to go back to being discerning, socially enlightened creatures immediately following the show.

Like most other blockbuster movie-to-musical adaptations before it, Pretty Woman is full of mostly forgettable/superfluous songs (score by Bryan Adams and Jim Vallance). Despite that, it does manage to be quite a fun show.

With a book by director Garry Marshall and screenwriter J. F. Lawton, the musical is almost a carbon copy of the movie right down to the iconic costumes. After all, what is Pretty Woman without the Carol Channing wig and thigh-high black stiletto boots, the polka dot dress, or the red ball gown?

Scene favorites are there too, playing almost note for note with the movie and only falling flat in a few instances. Most notably and disappointingly Vivian’s big revenge shopping moment.

After being slighted by the snooty shopkeepers the day before, Vivian returns in full retail glory to show the saleswomen the error of their ways. Turns out the lines, “Big mistake. Big. Huge," don't have the same punch without the close-ups. Oh well.

Additionally, if you have your heart set on seeing Vivian singing Prince’s Kiss in a bubble-filled hotel bathtub, you’ll have to recreate it at home, as it doesn’t make it into the musical. Shame that one.
But it isn’t simply the movie mimic that makes us smile at this touring production of Pretty Woman. The cast is what makes this show.

It’s impossible for any stage performer to match the charisma of a10 ft tall movie screen close-up of Julia Roberts, with her big smile, bigger hair, and wholesome with an edge sparkle. But from her first belt-it-out number, Anywhere but Here, Jessie Davidson shows us she isn’t just filling in – she’s making Vivian her own.

The numbers themselves may not stick in our heads, but Davidson's voice sure will. Strong, assured, and giving full register, Davidson has our full attention.

Impressively her comedy chops are just as strong. Vivian is all rough edges and goofy guffaws and Davidson plays her fish-out-of-water schtick with great effect.

For any OG musical fans, the real fun of the show will come in not just one trip down memory lane, but two, thanks to Adam Pascal as Edward.

Rent-heads will remember his Tony-award-winning turn as Roger in the original Broadway production of Rent and the 2005 movie adaptation. His is a voice you don't forget, a unique blend of power and raspiness with emotion oozing out of every note.

His big solo number and the best of the show, "Freedom," gives goosebumps and makes us in the know wish he could follow up with a few lines of One Song Glory or Will You Light My Candle so we can revel in his treasured voice a little longer.

With such prowess, it's then a bit confusing that the character of Edward has been softened down quite a bit. Gone is the ruthless businessman Richard Gere played in the movie and instead Pascal is faced with an Edward who feels more matter-of-fact and easily pliable, making his final transformation feel, well, less transformative.

Still, Pascal pulls it off and we sigh with deluded happiness when he gives Vivian the princess ending she so craves.

Supporting roles also kick this show up many notches. Jessica Crouch as Vivian’s bestie Kit gives us great tough girl energy. Travis Ward-Osborne as Happy Man, a new multi-character addition, does a fine job as narrator and slips nicely into the memorable Vivian-positive hotel concierge role. Trent Soyster as Giulio the bellhop gets lots of laughs with his fine-tuned physical comedy.

Rounding out the show’s selling points is director-choreographer Jerry Mitchell’s peppy and energetic choreography that moves things along at a decent clip, giving us some truly enjoyable moments such as a terrific tango number that repeats cleverly in several scenes.

Does the musical top the movie? No way. Does the movie top our memory of the movie? Probably not. But that’s how nostalgia works in this case. Don't analyze it. If you want the Pretty Woman feeling, brush your hair, put on your pants, and head to the Hobby Center. You won't come out singing, but you'll probably be smiling.

Pretty Woman continues through January 8 at the Hobby Center, 800 Bagby. For more information, call 800-982-2787 or visit thehobbycenter.org or broadwayatthehobbycenter.com. $35-$95.
KEEP THE HOUSTON PRESS FREE... Since we started the Houston Press, it has been defined as the free, independent voice of Houston, and we'd like to keep it that way. With local media under siege, it's more important than ever for us to rally support behind funding our local journalism. You can help by participating in our "I Support" program, allowing us to keep offering readers access to our incisive coverage of local news, food and culture with no paywalls.
Make a one-time donation today for as little as $1.