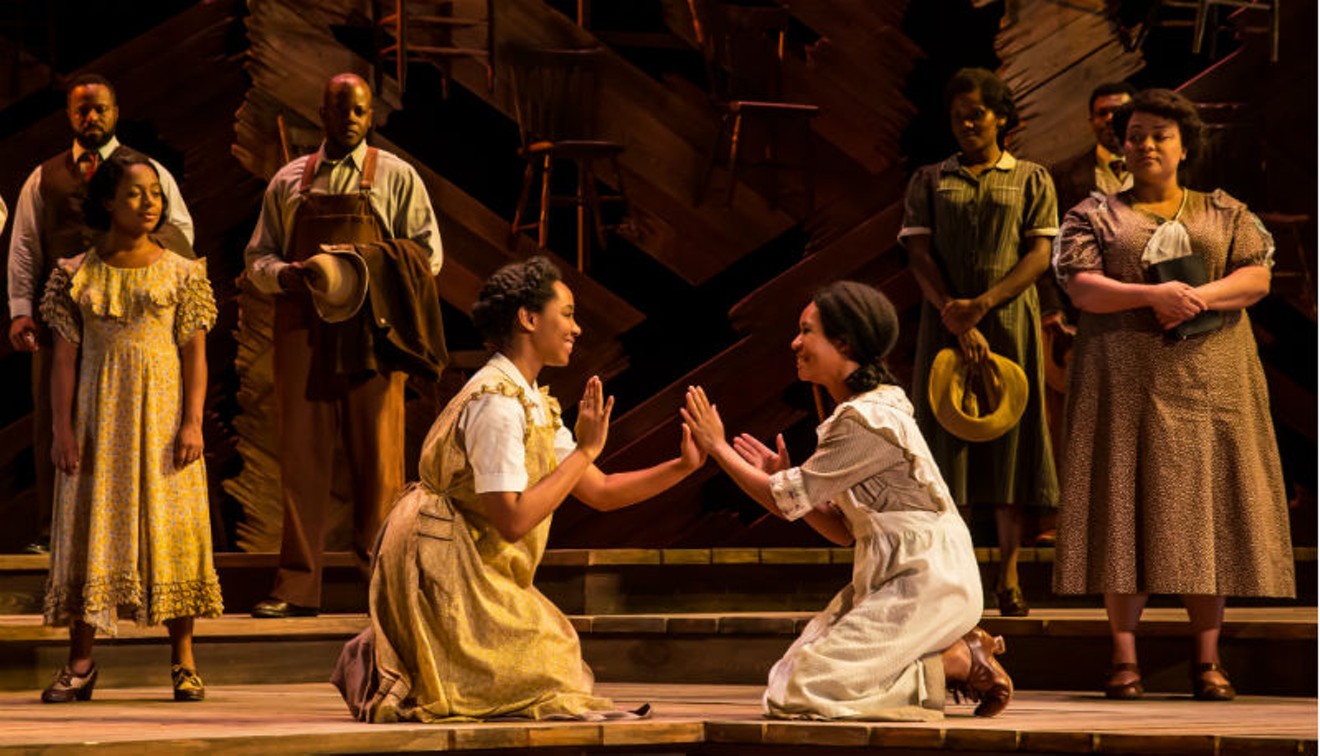 OK, maybe “powerhouse,” “incandescent,” even “lovely,” that I would agree with, but “ugly”? No way on earth or any stage this side of the Great White Way.

No one in their right mind would ever call Hicks anything but “mesmerizing”and “beautiful.” Nothing else will do. How can we believe anything if everyone on stage believes Hicks is not klieg-light worthy.

No matter what trials and tribulations Celie endures, we know her story will end in personal triumph and emotional uplift because where else could it go with a heroine who's so lovely and possessed with such a magisterial voice?

In this Broadway adaptation, the grit has been scrubbed off Walker's epistolary novel. No matter what minimal treatment director Doyle overlays on his revival, the sweet Hollywood Necco-wafer voice of Spielberg is too much in evidence. The years fly by like so many calendar pages, incidents pile up, and characters undergo transformational changes in front of our eyes without so much as a blink to real life. Is this rural Georgia in1910 or Warner Brothers' backlot in 1940?

None of this means that the show holds together, far from it, for by the end everyone loves everybody; the past is forgotten; all sins forgiven. Between acts, Celie blossoms into a successful designer, even though we've never seen her sew so much as a baby blanket during her previous life of horrors. This is insidious candy-coating. (In a hideous twist of irony, one of the show's producers was Harvey Weinstein. Remember him? Whoopie Goldberg and Oprah Winfrey, who starred in Spielberg's movie adaptation, seem to have conveniently forgotten the robe-less Hollywood mogul and his own hotel chamber of horrors.)

The cast makes the most of this sugar-coated world. Hicks, of course, is marvelous as Celie, even though she has to pretend to hide her candle under a bushel. It's impossible to hide her blaze too long. She's much too beautiful and hot for that.

Carrie Compere, as “Oprah-inspired” Sofia, is her own force of nature, a “Hell No!” woman who rebuffs any restraints put upon her. Her anthem – what else, “Hell No” – is a genuine showstopper. Any time Compere appears is showstopping. But her woeful tale flies by, as do all of the sisters' stories.

Celie's beloved sister Nettie, who wafts in and out of the show, is blessed by the performance of N'Jameh Camara, who sings like she should be the star.

Carla R. Stewart, as Shug Avery, jook joint singer, sexy man trap, and Celie's romantic deliverance, has a robust earthiness and magnetism we take on faith. The guys in the story fall all over themselves in her presence, but we don't believe them. Stewart is lovely; it's her character that's hard to believe.

None of the men in Walker's tale are admirable, so it's admirable that we like them as much as we do. They're all indistinguishable: Pa (J.D. Webster), Harpo (J. Daughtry), Mister (Gavin Gregory), Grady (Jared Dixon). They bash Celie, put down Sofia, drive off Nettie, purr around Shug. Men are second place in this show, though always semi-powerful as they prowl around in the background.

Doyle's minimalist production, with its backdrop of rail-back chairs, suggests, I guess, some type of Georgian backwoods atmosphere, though it screams glossy shelter magazine.

But this is a show about women and their eternal struggle. In that it succeeds, inspired through the gospel-infused music and Hicks' radiance. “Ugly,” you've got to be kidding me.