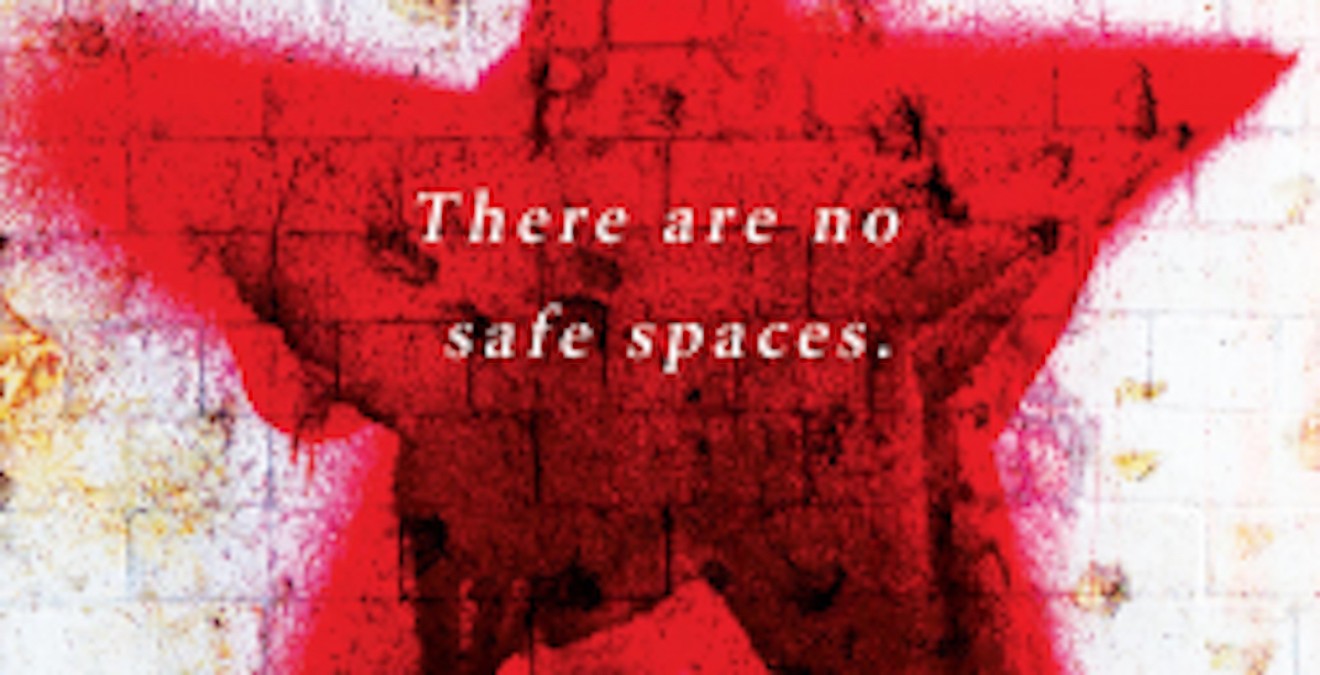 Hold onto your butts, kids Part of the Trigger Warning cover
If I ever want an unfiltered look into the mind of the average paranoid right-wing American all I have to do is unblock the president on Twitter. I don’t do that because it’s like watching grammar being trapped in an abusive relationship. Better written but containing no fewer nuts or traces of nuts is Trigger Warning, a book that came out this August.

The author is J.A. Johnstone, the niece of prolific author William W. Johnstone who apparently took over the family literary legacy after his death. I’ve never had the chance to sample William’s work, but his niece is something else. By that, I mean something other than a good writer. You’ve got to read this synopsis…

POLITICAL CORRECTNESS WON’T SAVE YOU

Former Army Ranger Jake Rivers is not your typical Kelton College student. He is not spoiled, coddled, or ultra-lib like his classmates who sneer at the “soldier boy.”

Rivers is not “triggered” by “microaggressions.” He is not outraged by “male privilege” and “cisgender bathrooms.” He does not need a “safe space.” Or coloring books. Jake needs an education. And when terror strikes, the school needs Jake . . .

Without warning, the sounds of gunfire plunge the campus into a battle zone. A violent gang of marauders invade the main hall, taking students as hostages for big ransom money. As a veteran and patriot, Jake won’t give in to their demands. But to fight back, he needs to enlist his fellow classmates to school these special snowflakes in the not-so-liberal art of war. This time, the aggression isn’t “micro.” It’s life or death. And only the strong survive . . .


I started reading this book and I literally cannot stop laughing. It’s Marine Todd: The Novelization. Y’all remember Marine Todd, yes? The right-wing meme about the Marine who punches a philosophy professor and upholds the name of Jesus in doing so? God’s Not Dead is basically the super passive-aggressive version of that Republican fan fic. Johnstone takes it the opposite direction into the danger zone!

I started delving into this book, getting as far as Chapter 5 before I started worrying that prolonged exposure was a danger to my hard-won sobriety. It is everything you think it is and more. Johnstone uses quotations marks the way wrestlers use folding chairs; not as intended, too often and in a manner that causes severe headaches. She harps on the meaninglessness of terms so often that it’s like she’s trying to divide her own book by the lowest common vocabulary word. You might remember that one of the leaders of the snack-deprived Malheur National Wildlife Refuge terrorist occupation wrote a post-apocalyptic novel that was posthumously published. This makes that look like Hemingway.

Meet Jake, who is goddamn perfect. Jake doesn’t want to go to college, but he’s here because his granddad feels bad about how his father turned out a drug addict. Jake doesn’t need college, though. No sir. The book makes it clear he didn’t finish high school, but he totally could have if he hadn’t wanted to get to the army as fast as possible. Johnstone keeps her Mary Sue humble, though, by having him say he could only have made salutatorian, not valedictorian. Jake also shot skeet at a professional level by 12, drove perfectly at 14 and is implied to have bedded all his friends’ moms. Did I mention that while he was serving his two tours of duty Jake got both his GED and a bachelor degree? Ain’t Jake awesome?

In the first chapter, Jake is alerted to a damsel in distress being abused by her boyfriend outside his dorm room.* Jake leaps to the rescue — making sure to sneer at some people discussing micro-aggressions on the way down — and promptly liberates the hapless dame by punching her beau in the stomach. Oh, and Antifa attacks him. And the woman calls him an oppressor even though she is so clearly turned on like the lights at Howard Johnson. Will she realize Jake-man is greater than all the liberal arts courses on Planet Earth later? I didn’t read that far yet but I’ll eat my fez if they don’t kiss after a gun fight.

Is he thanked? No. He is called a fascist. The school paper labels him a far right extremist. The local police think he should be expelled. All because he is a traditional man with traditional values. If this persecution complex gets any stronger I’m going to sell Jake’s cup on eBay as an Indiana Jones and the Last Crusade set prop.

Jake – because he is absolutely perfect – isn’t upset by any of this. He remains calm and collected like the warrior poet he is. He is stoic, resolute and without complaint the way all right wing people confronted with their liberal boogeypersons are known to be.

The book somehow gets more ridiculous. See, Jake doesn’t know what he wants to do with his life. He’s searching for himself, and Kelton isn’t really into all that science stuff. They have a master’s program in microbiology, though, so that’s where Jake goes. Unfortunately, the head of the department is Dr. Mtumbo, a white guy who identifies as African-American as reparations for his colonist ancestors. Dr. Mtumbo doesn’t like folks like Jake, of course, and Jake doesn’t like his course work for a degree in microbiology. Here’s THAT lunacy.


Remember, these are prerequisites for a graduate degree. Jake already has a bachelor’s in biology. Like God’s Not Dead, stuff like this makes me wonder if these writers have ever even stopped to pee in a gas station near a traditional college let alone attended courses in them. It’s clear that Johnstone wants to sell Kelton as the place people go to be gay man-haters.

Mtumbo goes on to tell Jake he has no First Amendment rights because of course he does. Here's an exchange from this part of the book:


Then he gives Jake a manual on sexual consent where no means no and yes also means no because all liberals are prudes apparently despite teaching alternative sexuality literature as a core tenet of the hard sciences. What do these people think happens at college? Berkeley literally has military programs on campus as well as organizations for young conservatives and Republicans. BERKELEY, where liberal academics are grown in biodegradable urns and get all their first words from bel hooks texts personally read to them by Hillary Clinton.

I have to confess, I am probably not going to continue with this book unless the editor throws it at my feet with $30 tucked in it and screams, “type, slave. Type for your Liberal Media Masters and despair.” So far I have no idea who these bad guys with guns who storm this college are. I’m baffled why they would anyway since Johnstone makes it clear that despite it being packed with liberals the school has its own campus security, the police respond rapidly to calls and it has roving gangs of bike chain-wielding Antifa members. It’s like a bloody Final Fight level, but somewhere in all of that Jake, and only Jake, is going to become the leader of a rebel force needed to fight back. Because it’s not about good guys with guns so much as one person’s paranoid hero delusion being validated for $7.99 on Amazon.

Trigger Warning is unintentionally hilarious. Johnstone clearly believes that she’s landing sick burns on liberal America with every page. The book is like the world’s biggest MAGA hat, and just as likely to be a shield against personal insecurity masquerading as strength.

I get that some conservatives feel like they’re some oppressed minority under attack, but that belief is built on fever dreams like Trigger Warning.  Lewis Carroll couldn’t build a mad plane of existence as unlikely as what Johnstone and her readers seem to think is day-to-day life inside a liberal mind.

On the other hand, Johnstone makes it a point to hate the very concept of books, especially eBooks, within the first few pages of her story ... which is a book. Maybe her opinion of her audience’s learning capabilities is a little low. All Jake ever needed was what the military taught him, and it seems to be all Trigger Warning thinks anyone should need. That would be sad if the book wasn’t so bananas that laughter is its constant soundtrack.

*This takes place in the Nafziger Plazz, which looks like Johnstone typed the word “Nazi” and then head butted her laptop.

**K is for kink (and Kompressor!). This campus has way hotter reading material than I had in school. All I got was the depressing sex scenes in The Handmaid’s Tale.

Trigger Warning is out now. There’s a book of short stories by Neil Gaiman of the same name. You should read that instead.
KEEP THE HOUSTON PRESS FREE... Since we started the Houston Press, it has been defined as the free, independent voice of Houston, and we'd like to keep it that way. With local media under siege, it's more important than ever for us to rally support behind funding our local journalism. You can help by participating in our "I Support" program, allowing us to keep offering readers access to our incisive coverage of local news, food and culture with no paywalls.
Make a one-time donation today for as little as $1.