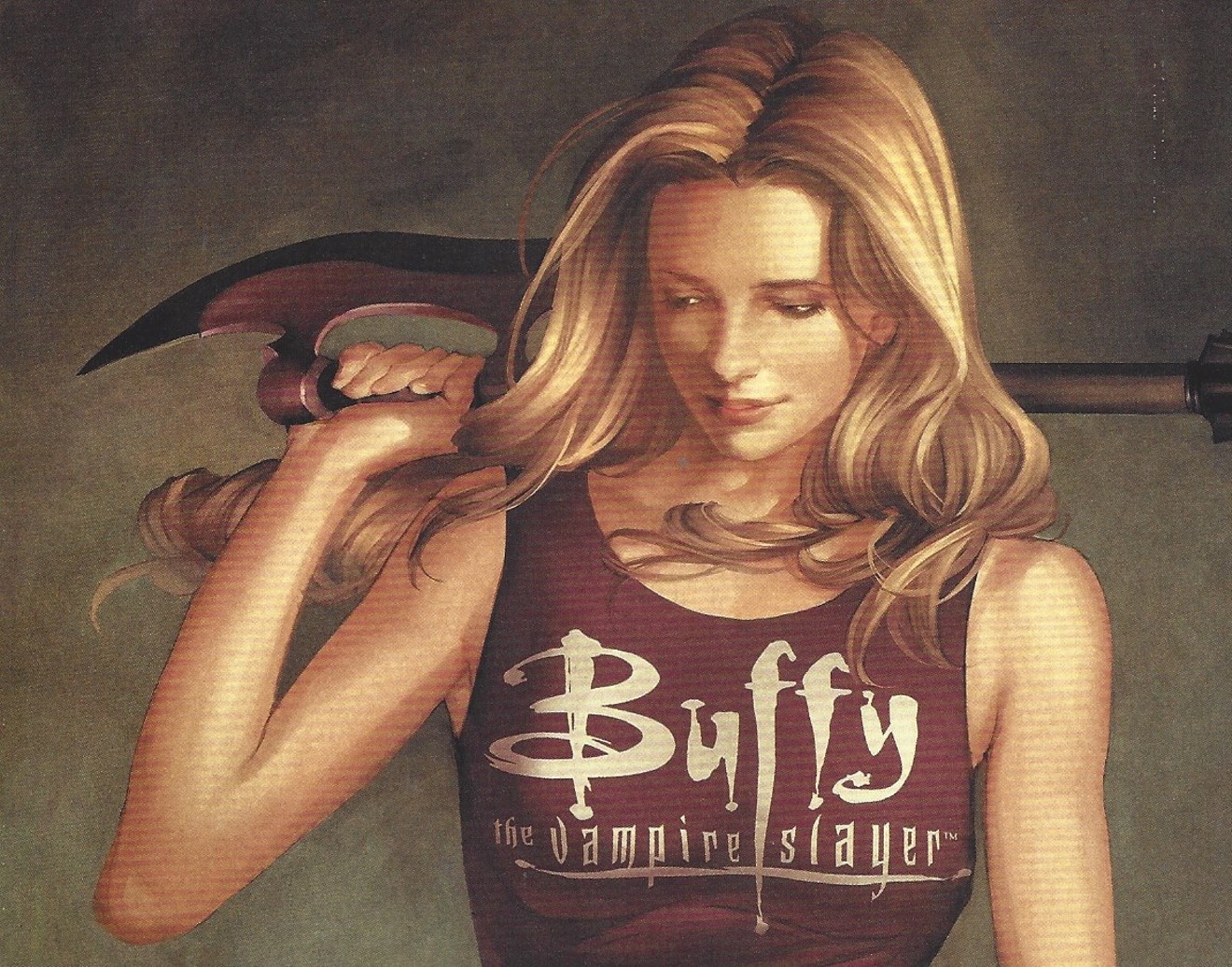 Buffy Season 8 showed what Joss Whedon would do if he didn't have to worry about actors. Cover image of "The Long Way Home #1"
Warning: Nude/sexual pictures and spoilers through Issue No. 34 of the comic.

Michelle Trachtenberg, who played Dawn Summers on Buffy the Vampire Slayer, recently revealed that inappropriate behavior by series creator Joss Whedon when she was a minor led to a rule that he was never to be allowed on set with her alone. In April 2007, after the show had ended, he started having her drawn nude in the follow-up comic book.

Trachtenberg is one of many who have come forward about Whedon. Ray Fisher stated last year that the director was abusive to him on the set of Justice League, and Gal Gadot has said Whedon pressured her to do a sexually themed joke as Wonder Woman she was not comfortable with. This past week, a host of former Buffy and Angel stars including Charisma Carpenter and Amber Benson, also say that he terrorized and abused his cast, with Carpenter’s tales of his behavior about her pregnancy being particularly vile. Whedon has not responded to these claims.

I remember being very excited when the Buffy Season 8 comic was announced. The series ended on solid note, but there was clearly more story to tell if someone wanted to. The idea of Whedon, who I considered a genius and a feminist, being free of network meddling, budget worries, and the needs of his cast was liberating. Buffy could finally be unrestrained.

What Whedon did when no one was telling him “no” was frankly disturbing, and in light of the recent allegations it’s a clue to how Whedon’s mind works. Though not all of the books were written by Whedon, he executive-produced the series and guided its direction. The Houston Press was unable to contact Whedon for this story.

In the first story arc we find out that Dawn has committed adultery against her magical boyfriend. As result, she has been going through a lot of physical transformations that are illustrated by her being completely naked. Here’s nude Dawn as a giant… 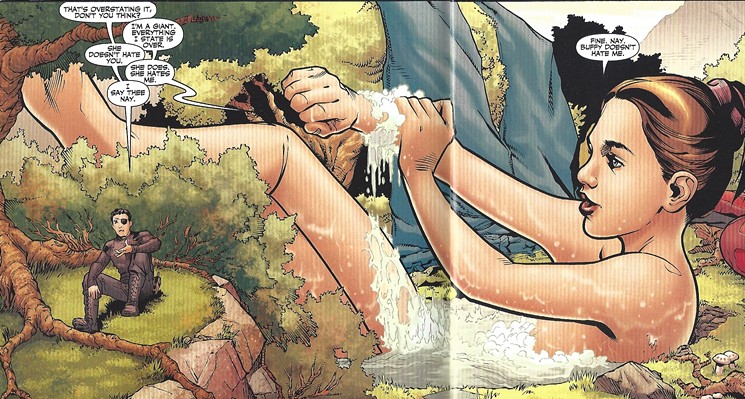 Reminder that macrophilia is definitely a thing.
Screenshot of "The Long Way Home #2"
And here's her later as a centaur. 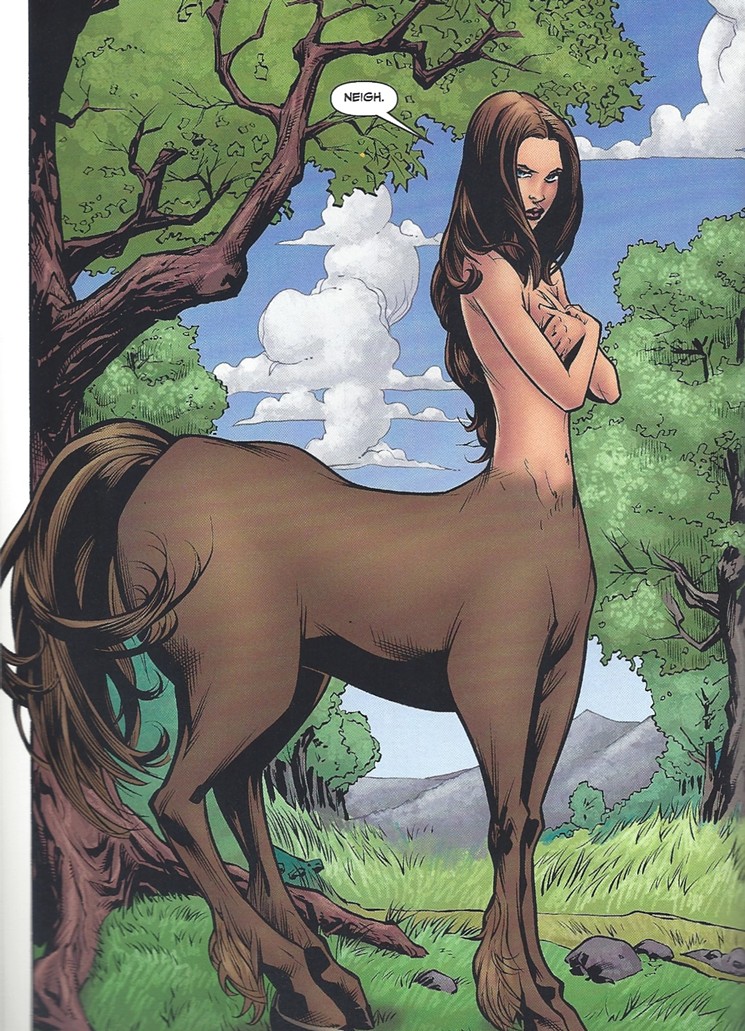 If a someone constantly had me drawn in various bizarre fetish set-ups, I wouldn't want to be in the room with him alone either.
Screenshot of "Time of Your Time #1"
Whedon eventually had Xander end up in a romantic relationship with Dawn, which is creepy considering what we are hearing now. Whedon has always said that Xander was basically his insert character. On the commentary of the episode "Welcome to the Hellmouth" he described this in detail.

Xander, I've always identified as the figure I most was like, 'cause he did have that inability to sort of... talk to the girl and come through in the big moment. And he does make an idiot of himself a lot. Of course, he's a lot prettier and more muscular than anybody who acts like that should be but this is television, so, get over it.


The fact that Whedon made his avatar her boyfriend is not cool considering what Trachtenberg has alleged of their on-set interactions. It's also by no means the only time he seemed to use the pages of the comic as his personal fantasy fulfillment vehicle.

For instance, here's Faith taking a bath with a new character called Lady Genevieve for... reasons. 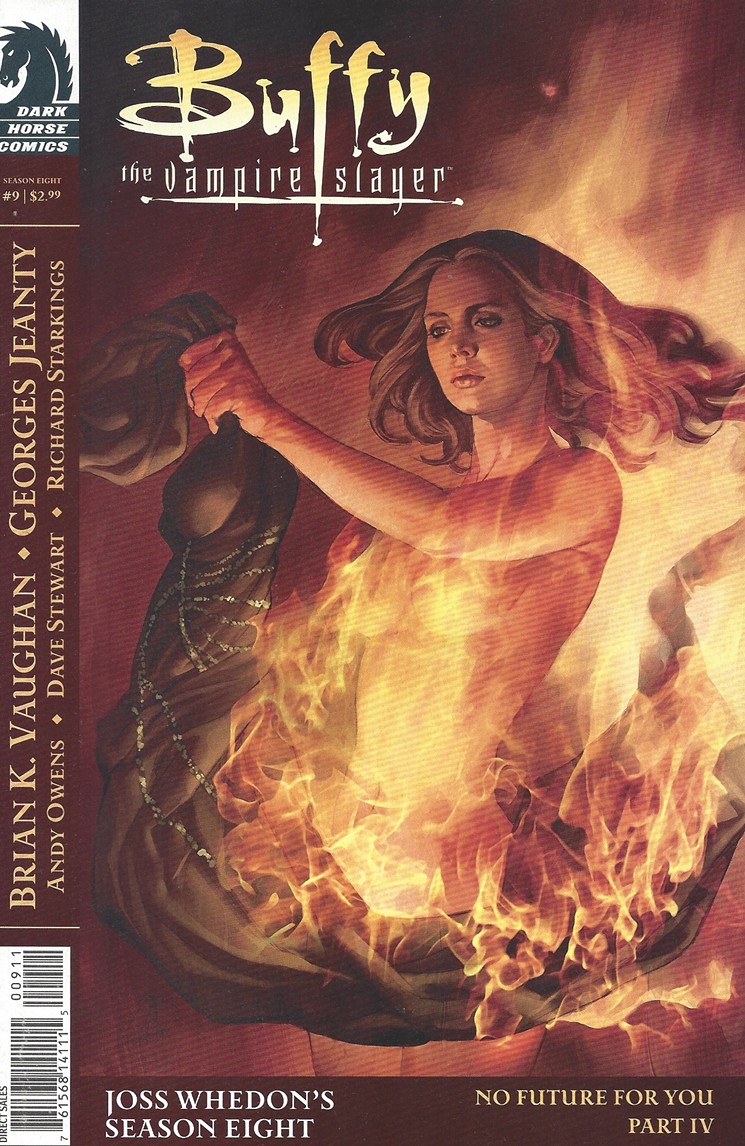 "She's burning her clothes for symbolism! Right, and Quiet breathes through her skin."
Cover of "No Future for You #4"
Willow gets her naked turn in a one-shot. 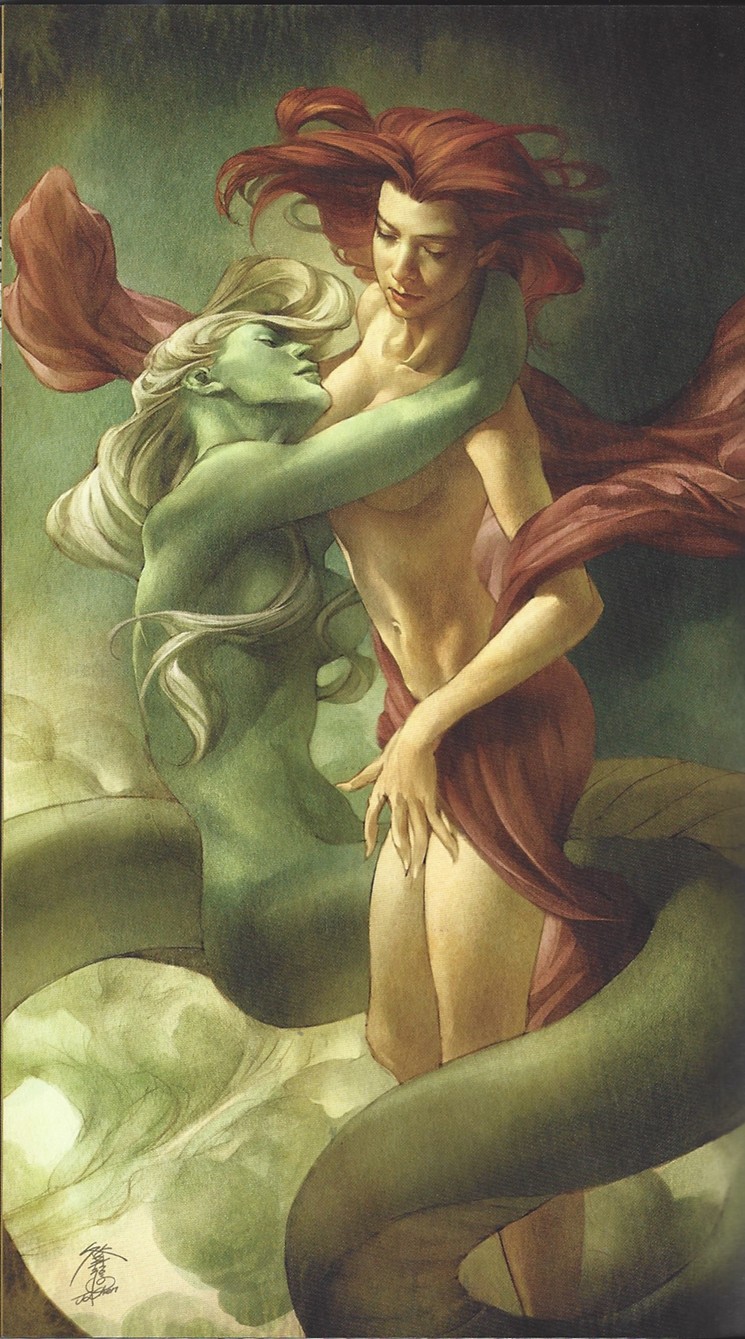 Willow spends most of the issue hanging out with a busty nude snake lady. There's a much better comic about that.
Cover of "Goddesses and Monsters"
The person who gets it the worst when it comes to sexual objectification, though, is definitely the title character. Whedon did sexual storylines with Buffy on the show, and they were also always very messed up. Over the course of seven seasons she literally removed Angel's soul because she lost her virginity to him, was caught in a spell where she and Riley were compelled to endlessly have sex because of ghosts, was under another spell when she offered to strip for Xander, and was in a toxic physical relationship with Spike where he penetrated her over her protestations in the middle of a concert and later tried to unsuccessfully rape her in a bathroom. 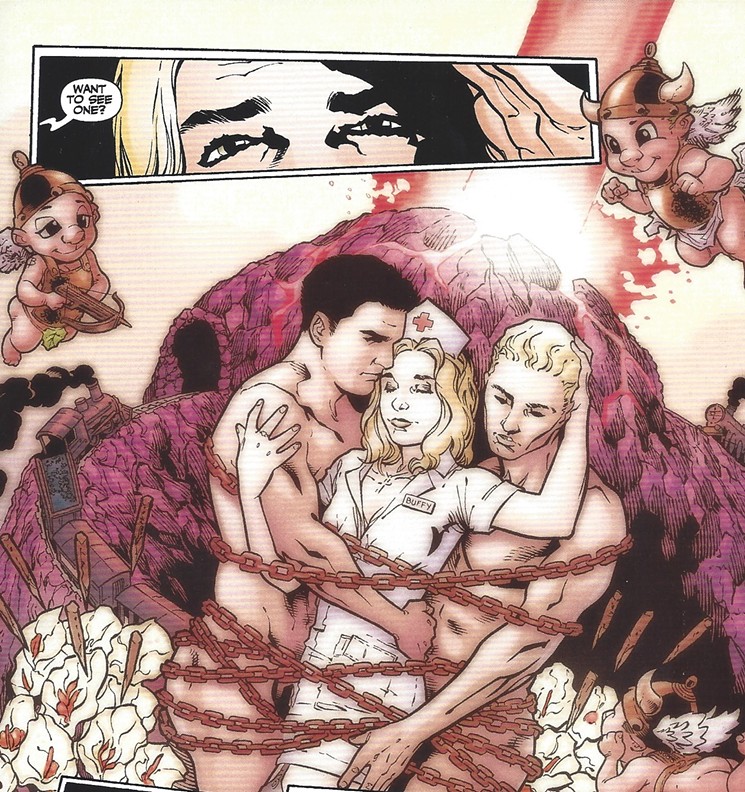 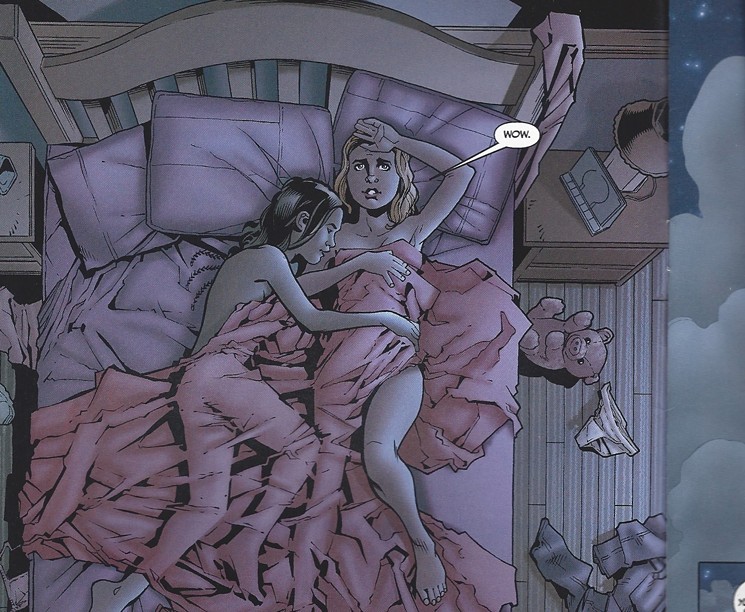 This scene goes on for four pages.
Screenshot from "Wolves at the Gate #1"
That theory is supported by the reaction of Xander, who walks in on them. Remember, this is Whedon's insert character. 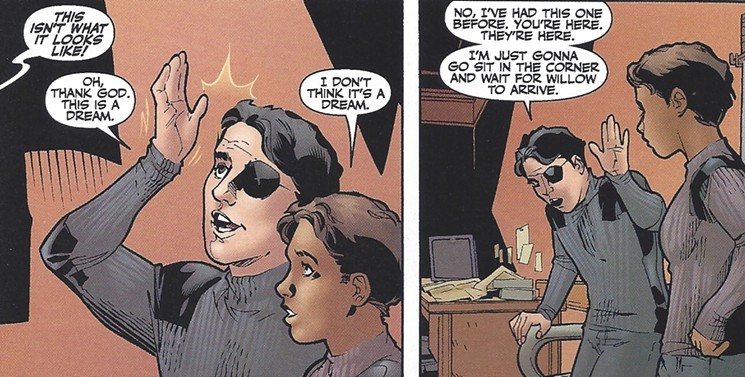 "I masturbate to you. Was that clear? I want to make it crystal clear."
Screenshot of "Wolves at the Gate #1"
The worst bit, and the one that made me finally put down the comic because it was clearly more about Whedon getting off than the story, came during the "Twilight" arc. It's revealed that the new bad is actually a superpowered Angel, who has been trying to kill the Slayers because I do not remember and did not bother to learn when I went through my longbox of issues. After a fight, Buffy and Angel then proceed to have earth-shattering (literally) sex for the entire length of an issue. The sub-header of the book is actually called "Them F#©%ing," and it has the least subtle ending of anything ever drawn. 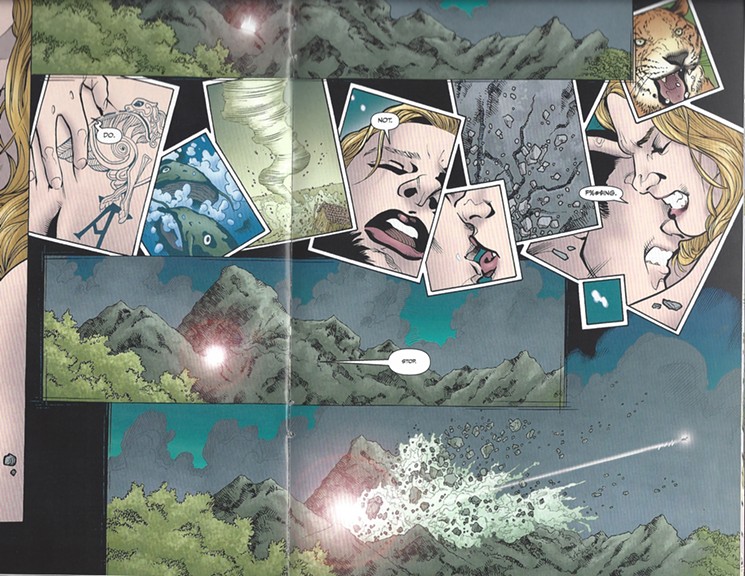 Did you catch it on the bottom right, there?
Screenshot of "Twilight #3"
Look, there's nothing wrong with sex in a comic book. Matt Fraction's Sex Criminals and Brian K. Vaughan's Saga are fantastic examples of mature content in the medium. Vaughan actually wrote the "No Future for You" arc, so maybe the general trend of comics into more sexually-themed stories and art should be considered.

On the other hand, these panels were made under the supervision of a man who apparently did not respect boundaries. He's been accused by his ex-wife of cheating on her with the young women in his employ, and according to Trachtenberg his behavior with her crossed a serious line. The Buffy Season 8 comic is an example of what can be done when actor's agency is no longer something to worry about, and it's unsettling how quickly and completely Whedon used that power to reduce his characters to erotica clichés. The whole thing turned into a self-indulgent wank fantasy. In light of the recent allegations, that should have been a much bigger red flag.
KEEP THE HOUSTON PRESS FREE... Since we started the Houston Press, it has been defined as the free, independent voice of Houston, and we'd like to keep it that way. With local media under siege, it's more important than ever for us to rally support behind funding our local journalism. You can help by participating in our "I Support" program, allowing us to keep offering readers access to our incisive coverage of local news, food and culture with no paywalls.
Make a one-time donation today for as little as $1.