Galveston Island: Where Things Go Bump in the Night 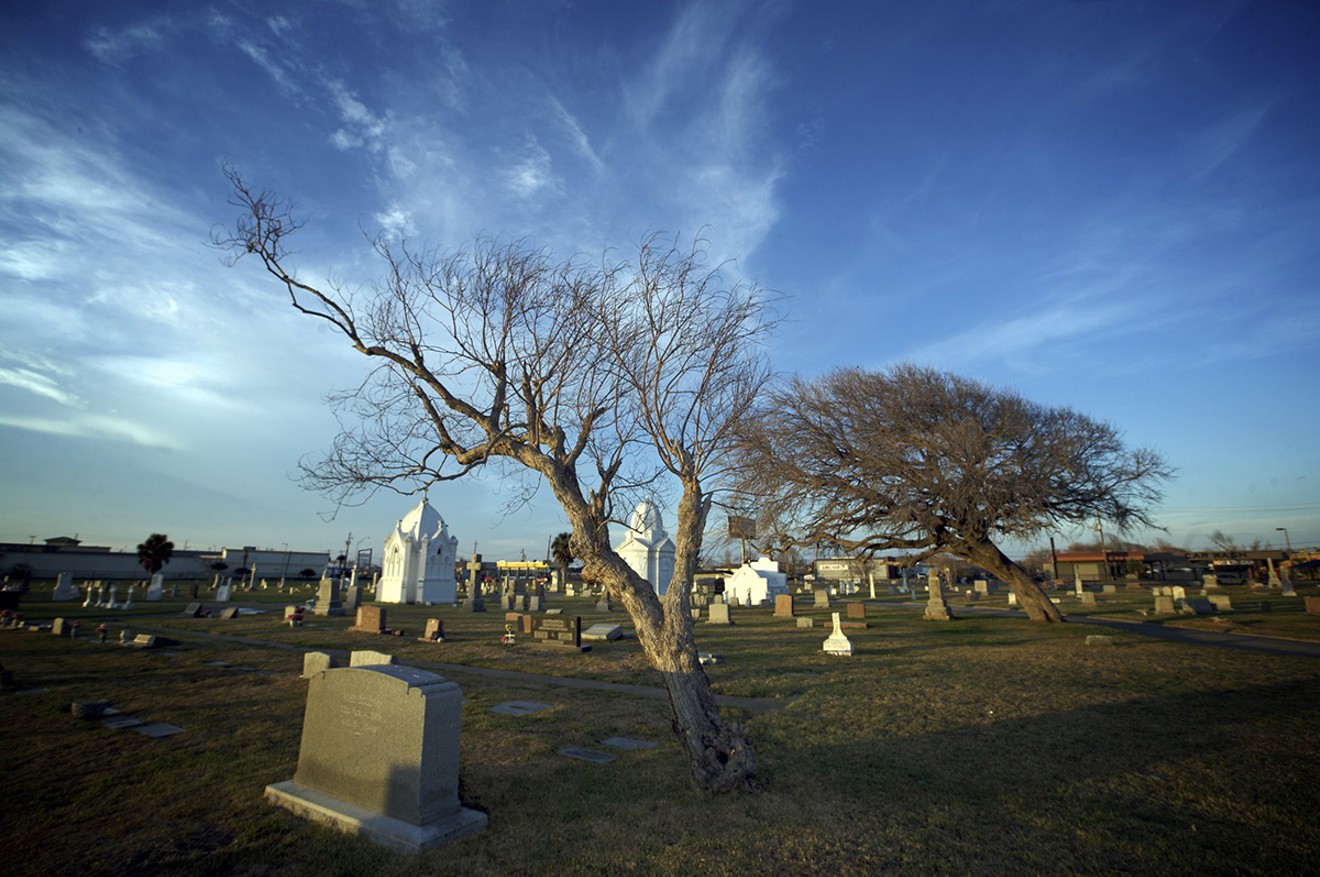 Nearly 10,000 residents were killed in the Great Storm of 1900. Photo by Ed Schipul/Flickr via CC
When Johnny Kowalski moved to Galveston he expected to find a sleepy party town. But what he found instead was a rich cultural history and whispers of the paranormal, so he decided to dig deeper.

With an encyclopedic brain and a thirst for facts, Kowalski started looking at all of the historical markers, learned about the old houses that survived the Great Storm of 1900, and discovered clues on every corner. 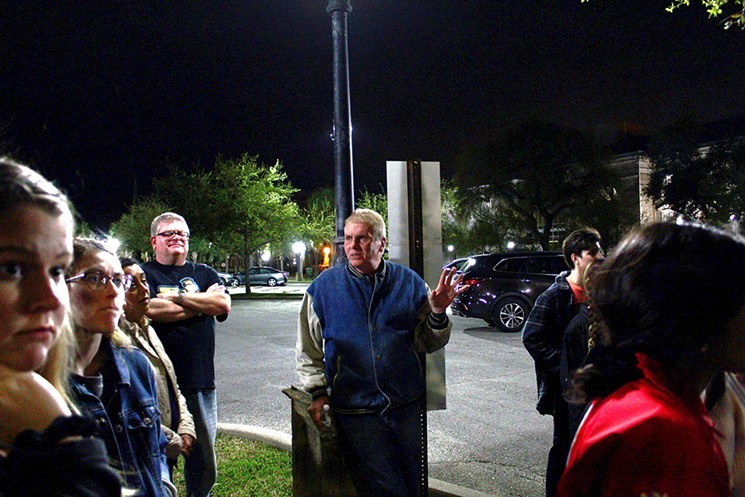 Johnny Zombie, your ghost medium, has answers to all your paranormal questions.
Photo by Jason Wagers

"It's a hobby that became a passion," says Kowalski, who now does a brisk business with the Historic Galveston Ghost Tour, the Red Light District Tours, and the Storm on the Strand Ghost Tour. When asked whether ghosts are real, he says that people have definitely had experiences at places like the Hutchings-Sealy National Bank building, Ashton Villa, the former Normandy Inn, and the Durst House.

For those unfamiliar with this modern-day tale of macabre, real estate heir Robert Durst was suspected of killing and dismembering his neighbor, Morris Black, though he was later acquitted of murder.

Durst showed up in Galveston in 2001, presumably on the run for killing his longtime friend Susan Berman in California the year before.

"He moved into a $250 roach-infested duplex," says Kowalski, about the millionaire on the lam. "He was dressed in drag, checked in under the name of Dorothy Ciner, wearing a cheap wig, and glasses held together by tape.

"Morris had a personality disorder where all he would do is complain about everything 24/7," says Kowalski. "He was Robert Durst’s neighbor, so Robert brutally beat him [allegedly]; he actually died from a heart attack from the beating he received."

When Black's body parts turned up in Galveston Bay, Durst was arrested and released on bail. After he missed a court hearing a warrant was issued for his arrest and he was eventually caught in Pennsylvania trying to shoplift a pumpernickel sandwich, even though he had $500 in his pocket.

"Robert went on to trial, hired [defense attorney] Dick DeGuerin, who got him off with a slap," says Kowalski. "Now he's in California for the murder of Berman. That's a serial killer there."

It's long been speculated that Durst also killed his first wife in 1982, though her body has never been recovered.

Ask Kowalski about Galveston's dark and sordid history, and the facts come flying in rapid-fire succession. He'll tell you how, during the Great Storm, a woman named Sarah stood in the second floor window of the Hutchings-Sealy building and plucked flood victims out of the water, saving many, only to die herself shortly thereafter.

"The next day it was 99 degrees, there were horrible epidemics. People were freaking out about another epidemic from the waterborne diseases and the dead bodies," says Kowalski.

The Normandy Inn has become a pilgrimage for those who practice voodoo and witchcraft.
Photo by Jason Wagers

"Go down the street to the Normandy Inn, it's a portal to hell. People consider it a satanic place: sacrifices inside the building, demons that live inside."


"Go down the street to the Normandy Inn, it's a portal to hell." — Johnny Kowalski


Though not all of Galveston's apparitions are scary. Kowalski says the most popular ghost sighting is at the Sealy mansion, with the sounds of children laughing and playing, and doors opening and closing by themselves.

"You have extreme wealth and poverty in Galveston; the town came back after oblivion. There's been vice, illegal gambling, prostitution, it was run by the mob," says Kowalski. "It goes into decline after WWII, just a fascinating place. You have the Civil War, [pirate] Jean Lafitte, the port, cannibals, shipwrecks, the Karankawa Indians.

"History is so fascinating."

The Red Light District Tours are scheduled for 8 p.m. (check schedule for exact dates) at 2711 Market, Galveston. For information, call 832-245-0492 or visit galvestonredlightdistricttour.com, $25.

The Storm on the Strand Ghost Tour is scheduled for 8 and 10 p.m. daily at 2411-A Strand in front of the Gypsy Joynt Jive Restaurant, Galveston. For information, call 832-245-0492 or visit stormonthestrandtour.com, free to $20.

Ghost Bus Tours
Say it three times fast and it sounds like Ghostbusters, but instead of a 1959 Cadillac you'll be riding in air-conditioned (or heated) comfort during this multi-media experience. Hear eyewitness recordings of ghost stories from those who experienced paranormal events, and learn a bit more about Galveston history.
5 and 7 p.m. Thursdays-Saturdays, 3 p.m. Sundays, 7 p.m. Mondays-Wednesdays, through October 30, with additional dates in November, Galveston Experience Company, 1522 Seawall Boulevard, Galveston, 409-741-3400, galvestonexperience.com, $25.

Dash Beardsley's Ghost Tours of Galveston
You won't find any Halloween costumes or cheap tricks here. Broaden your ghost hunting with paranormal expert Dash Beardsley, the "Ghost Man of Galveston." Tours include the Original Ghost Tour on the Strand, the Restless Spirits Tour, and the Secret Society Cemetery Tour. The last tour takes visitors through the Old City Cemetery, which is a combination of seven cemeteries that grew together over time. From Civil War soldiers to those who succumbed to raging waters in the Great Storm of 1900, the Ghost Man of Galveston knows where the bodies are buried.
7:30-9 p.m. Wednesdays-Saturdays, 123 Rosenberg; 8-9:30 p.m. Fridays and Saturdays, Saengerfest Park, Strand and 23rd; 8-9:30 p.m. Fridays and Saturdays, Broadway and 43rd, Galveston, 832-241-2623, ghosttoursofgalvestonisland.com, $15-$20

Haunted Mayfield Manor
They had us at "12 rooms of terror that will leave you screaming." Haunted Mayfield Manor is the only haunted house in Texas that's open year-round, and word on the street is that the young Dr. Mayfield is both unpredictable and quite insane. Paranormal explorers just might encounter ghosts, ghouls or strange shadow people. Enter at your own risk and save time for its sister attraction, Pirates! Legends of the Gulf Coast.
1-6 p.m. Thursdays, 1-9 p.m. Fridays, noon-10 p.m. Saturdays and noon-6 p.m. Sundays (seasonal hours), 2313 Harborside, Galveston, 409-762-6677, hauntedmayfieldmanor.com, $10-$13.95.

Basement to Attic Tours
Technically not a haunted tour, but during freak weather events it's believed that the ghost of original owner Walter Gresham will pace frantically back and forth on the front porch of Bishop's Palace. Even without his ghostly presence, this tour of the 1892 home that survived the Great Storm of 1900 takes visitors to areas that are generally closed to the public. Don't miss the panoramic views of the Gulf of Mexico from Mrs. Gresham's third-floor studio.
11 a.m.-12:30 p.m. October 19, November 9 and 23, and December 14-21, Bishop's Palace, 1402 Broadway, Avenue J, Galveston, galvestonhistory.org, $30.

Haunted Sunset Tours on Seagull II
Between the rogue pirate Jean Lafitte patrolling Galveston Bay, and the tragic loss of thousands in the Great Storm of 1900, it's no wonder the murky bay waters hold their own share of dark secrets. Watch the sun set over Galveston bay and hear a narrated exploration of its haunted history. Sunset cruises are BYOB.
5:30-7 p.m. October 19 and 26, Texas Seaport Museum, 2200 Harborside Drive, Galveston, galvestonhistory.org, free to $20.

Lanternlight Tours of the Bishop's Palace
Grab a lantern and explore the architectural nooks and crannies of Galveston's grandest and best-known building while also learning about the history of Walter and Josephine Gresham and their family. From colored stone, intricately carved ornaments, rare woods, stained-glass windows and bronze dragons, it's no wonder this Victorian castle has been named by the American Institute of Architects as one of the 100 most important buildings in America.
7-8 and 7:30-8:30 p.m. October 24-26, 1892 Bishop's Palace, 1402 Broadway, Galveston, 409-762-2475, facebook.com/events/2520507584671275, $30.

Galveston's Ghost Stories
Alicia and Gina, the Ghost Girls of Galveston Lantern Light Tours, will take adults on a journey through Galveston's epic past. Hear haunted tales of the island and learn more about the resident ghosts that call Galveston home ... if you dare.
7:30-8:45 p.m. October 24, Rosenberg Library, 2310 Sealy, Galveston, 409-763-8854, rosenberg-library.org, free.

Galveston Graveyard Tour
The only thing more frightening than a graveyard is a graveyard at night. Take this historic walking tour of Galveston's oldest cemeteries and learn about murders, suicides and city hauntings, plus get information about burial practices and the cemeteries' histories. Stops include the grave sites of the Menard, Williams and Childress families.
9 and 10:30 p.m. October 18-19 and October 25-26, Broadway Cemetery, 4001 Avenue K, Galveston, 409-789-9911, galveston.com/haunts, $15.

9th Annual Saengerfest Mini Monster Bash
The kids will want to dress up and trick or treat the businesses in downtown Galveston, then take part in crafts and games at Saengerfest Park. Prizes will be handed out for cutest, scariest and most creative costumes in different age groups in this annual event that's open to all.
1-4 p.m. October 26, Saengerfest Park, 2414 Strand, Galveston, 409-761-4111, galveston.com, free.

Ghostly Gardens
Put on those costumes and head out to this kid-friendly event that includes trick or treating at various locations, creepy crafts and more. The big draw is the costume contest with prizes for best costume in different age groups, up to age 12. The trick or treating and costume contest are free.
2-4 p.m. October 26, Moody Gardens, One Hope Boulevard, Galveston, 409-744-4673, moodygardens.com/halloween, free.

The Annual Great Pumpkin Festival
Take a selfie in the pumpkin patch, navigate the inflatable obstacle course, enjoy a magic show, play carnival games and go trick or treating at this family-friendly event.
5-7:30 p.m. October 27, Moody Methodist Church, 2805 53rd, Galveston, moody.org/pumpkinfestival, free.
KEEP THE HOUSTON PRESS FREE... Since we started the Houston Press, it has been defined as the free, independent voice of Houston, and we'd like to keep it that way. With local media under siege, it's more important than ever for us to rally support behind funding our local journalism. You can help by participating in our "I Support" program, allowing us to keep offering readers access to our incisive coverage of local news, food and culture with no paywalls.
Make a one-time donation today for as little as $1.