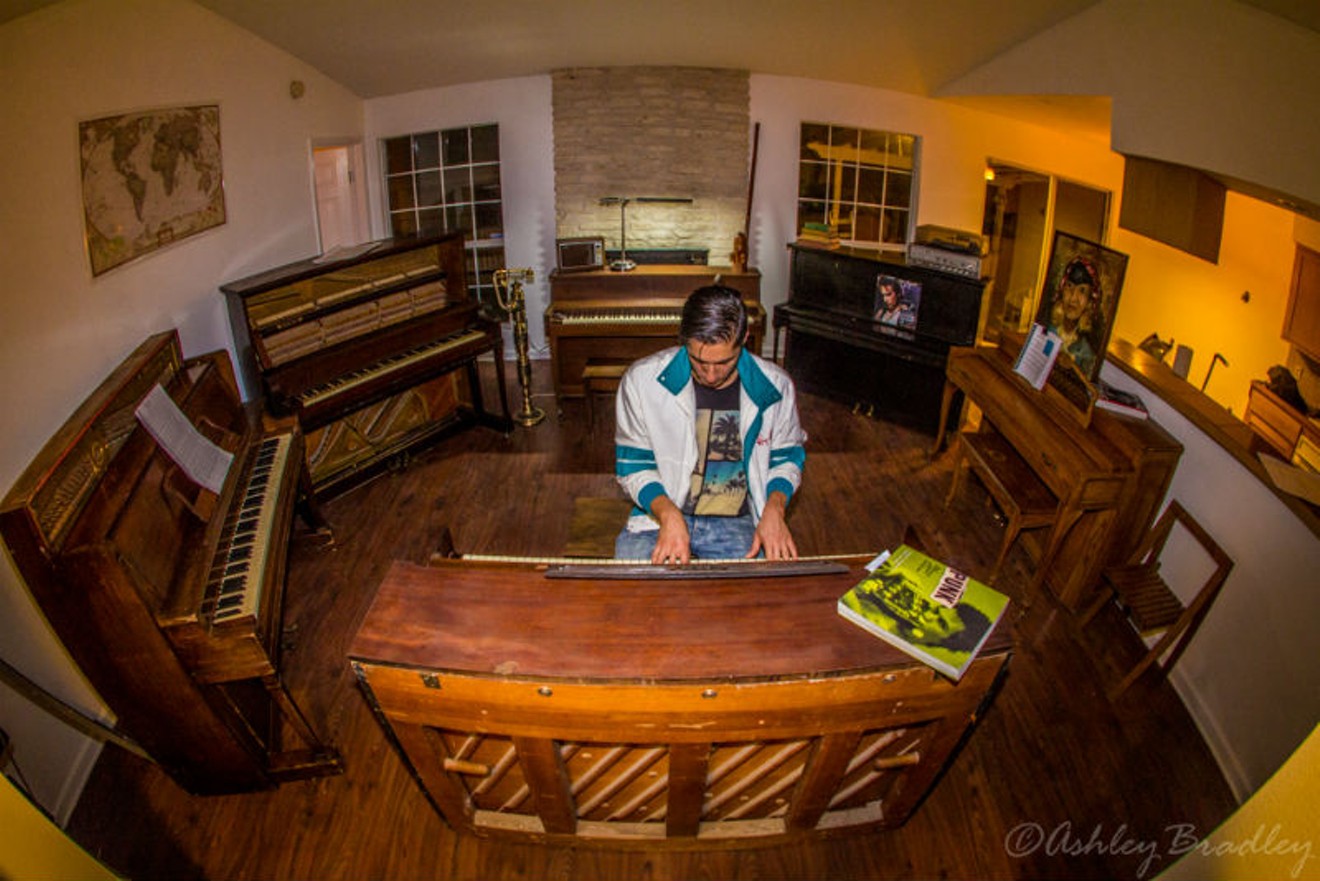 If you’re out and about this week and someone hands you an event flyer for an approaching show, check it to see if it’s a rare invite to a DIY classical music concert. What sounds like a musical oxymoron is an actual thing called 6 Pianos in Surround Sound and Houston’s Sawyer Yards hosts just the fifth live performance of this intriguing concert this Saturday.

The show gives its audience an immersive, surround sound experience. Local pianists selected by the concert’s  mastermind Nathan Felix perform his original compositions on a half-dozen pianos formed in a circle. The gathered are invited to sit inside the circle to hear the musicians play on used pianos which have been collected and refurbished just for the show. After the concert, the pianos will be donated to schools or music instructors in lower-income Houston areas.

The idea of injecting a DIY ethos into the traditionally staid world of classical music seems odd, until you get to know Felix a little.

“I grew up in Austin and used to play in punk bands growing up and I got into classical music when we were touring in a band just because we would listen to it on radio in some cities, that’s kind of all they had like in small towns, and I just fell in love with it,” he said.

Felix was in a band called The Noise Revival in the mid-2000s. By the end of that decade, he’d developed a healthy obsession with classical music and began learning composition for opera and symphony. As he started writing original work, he considered how he wanted that music taken to the masses and fell back on his formative days as a punk rocker. 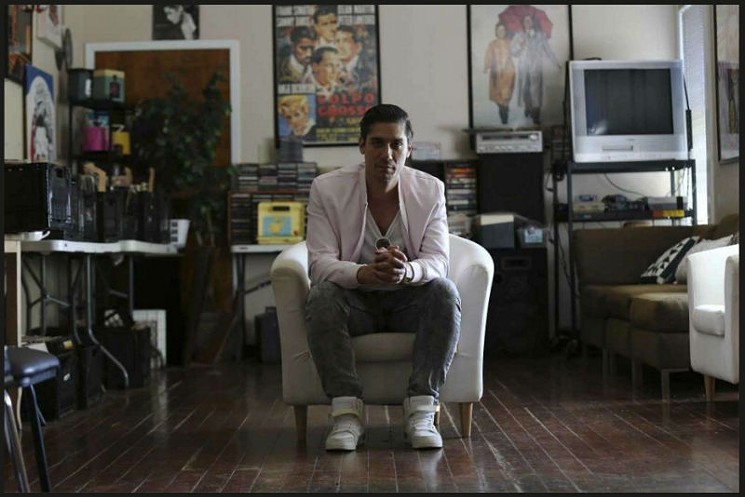 “Everything with me is based around the DIY ethic. I don’t want to just have music in a concert hall and people playing my music just because that’s what you do,” he said. “I try to bring it to a different, more community level. I try to present classical music or opera in a way that is not common or is something unique. I’m into immersive stuff. 6 Pianos, it’s about sitting in the middle and being a community hearing music from all walls, all sides.”

He says he’s taken his classical compositions to listeners in diverse settings, including once conducting an opera on a bus. Annually, he brings a 100-voice choir, orchestra and Austin music favorites like Roky Erickson, Sweet Spirit and Mobley together for an Indie Orchestra Night. He says it’s all part of getting people to listen to classical music in a different way.

Felix said 6 Pianos began because he’d always been a guitar player who yearned to learn piano. He remembered perusing Craigslist ads when he was younger and seeing many of the instruments simply being given away to anyone with the wherewithal to collect them.

“I remembered those Craigslist ads and I thought, ‘Wow, what if I just collect as many pianos as I can?’ and I picked the number six because it’s an even number, you can create a circle with it,” he said. “I thought it was just kind of a clever way to make use of something that’s kind of been thrown away. Again, it’s just DIY. You just gotta make it up and it’s yours.”

So, he collected the instruments and presented the first 6 Pianos concert at his home in Austin in November 2014. He soon learned it wasn’t just the idea that was his, so were the pianos. At the time, he stored them in his home, against walls and in corners, everywhere from bedroom to kitchen.


“That’s when I thought okay, I don’t want to have them all in my house but I don’t want to throw them away, maybe I can find schools or people that need pianos. So, that’s how the donation part of it began. It kind of gives them a life afterwards.”

Felix said the shows have grown organically since that debut concert. Someone from San Antonio saw the Austin show and recommended a concert there. Felix flew a friend in for that show and that friend had just conducted shows in Spain and thought Barcelona would be a good fit. In Barcelona, one of the pianists was an Australian, so the next show was in Melbourne. Felix hopes the next 6 Pianos venue comes from the recommendation of an audience member or performer at this weekend’s show. All very word of mouth, all very DIY, and all true to his vision.

While he’s growing classical music appreciation around the world, he’s gaining an appreciation for the world’s cities and the people who call them home. Each outing, he’s enlisted local talent to perform the music and found the donated pianos in the host cities. That local flavor is as key to the work as the music he's composed for it. The performers tabbed for this weekend’s show are Alisiya Boiko, Richard Castillo, Jesse Delgadillo, Lillian Gavalas, Keith LaLonde and Jonathan Scofield. The night's opening acts include Brent Baldwin, Henry Dillard, Daniela Riojas and the Greater Houston Brass Band.

“Each time I end up using local musicians, local pianists, and that gives each time I do the piece a different character because every pianist has a different feel or touch when they play,” he said. “But the most interesting part of it now, for the fifth time, you know, is that the pianos make up the character. I mean we’re getting pianos off of Craigslist, all different sizes, some are uprights, grands, some are a little spinets, some sound like honky-tonk saloon pianos, so you never know what it’s going to sound like or how old it is. And that’s what really gives the piece kind of a different character each time.”

Felix said, “you need three or four bodies to pick up a piano,” so he relies on volunteers and friends for the literal heavy lifting. He said the shows are not for profit so any audience donations go to refurbishing the instruments and keeping them in tune once they arrive at their new homes.

Pianos are collected, refurbished, played at the show and donated to organizations in need
Photo courtesy of Nathan Felix

He knows he might have chosen a less cumbersome instrument for such an ambitious project but he believes people want to “see the hard work.”

“In Spain they called me ‘The Crazy Texan.’ They were like ‘Why? Why do you want to bring six pianos?’ They just couldn’t understand it because it was also difficult - it was like in the center of Barcelona so it was difficult to get the pianos in the small, narrow, little alleys.”

In Australia, the only piano mover he’s ever worked with donated a crew and pianos there had to be hoisted by hook over fences and through alleyways.

Growing that appreciation for classical music is, of course, at the heart of Felix’s efforts. It’s why he’s out street teaming a classical music event with flyers and why he literally puts listeners at the center of the music. He stresses that he is performing these shows in non-traditional forms and venues because he wants others to find the music the way he once did while listening in a tour van.

“If you’re someone and you’re like, ‘Oh, I can’t afford to go to a concert of classical music,’ okay, well that’s cool. It’s a community thing, you can just come,” he said.

6 Pianos in Surround Sound, Sawyer Yards, 2101 Winter. Saturday, May 4, free with a suggested donation at the door.
KEEP THE HOUSTON PRESS FREE... Since we started the Houston Press, it has been defined as the free, independent voice of Houston, and we'd like to keep it that way. With local media under siege, it's more important than ever for us to rally support behind funding our local journalism. You can help by participating in our "I Support" program, allowing us to keep offering readers access to our incisive coverage of local news, food and culture with no paywalls.
Make a one-time donation today for as little as $1.