Jersey Boys Returns For 5 Encore Performances at the Hobby Center 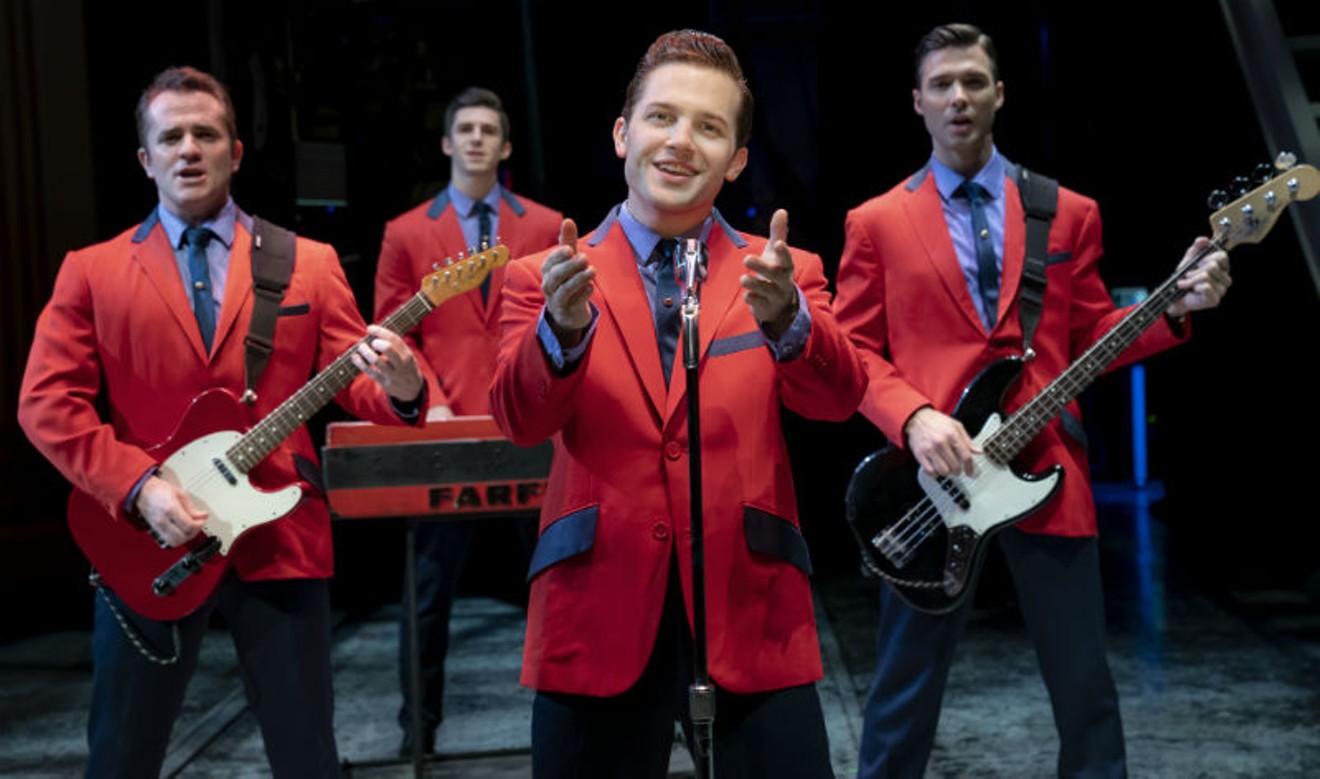 It's the four guys singing under a street lamp, behind-the-scenes story of a boys band that hit the triifecta of stardom. Jersey Boys, the story of Frankie Valli and the Four Seasons, has returned to Houston for a brief, blink-and-you'll-miss- them run, courtesy of Broadway at the Hobby.

The '60s group eventually disintegrated, done in by infighting and debt, but their songs — "Sherry," Big Girls Don't Cry," and "Walk Like a Man" — have lasted and are a prime reason to see this Tony- Grammy- and Olivier Award-winning Best Musical.

In this touring production Jon Hacker stars as lead singer Frankie Valli. Previously he was on Broadway in Jersey Boys as Joey, the Joe Pesci character, and was the understudy for the Frankie Valli role.

"Jersey Boys, I love it so much mainly because of the story of these four guys," he says. "The music, that music that always gets stuck in your head and I don’t mind it," says Hacker. "I’m always in the shower singing 'Sherry.' These guys were amazing guys and their story is amazing."

Growing up in Cincinnati, Ohio, Hacker says he sang a lot but it wasn't till he got in high school that he got involved in musical theater. "I loved old time rock and roll when I was a kid. I loved the Beach Boys. I even loved Frankie Valli."  "When I realized you could sing and act at the same time I was like 'Hey, that's kind of what I want to do.'"

After college at Wright State University, he moved to New York and it didn't take him long to find work. After the show closed on Broadway, he joined the off-Broadway production of Jersey Boys before going on the national tour. He's also been on a national tour of Newsies. Asked  how he understands the hard luck starts of the Four Seasons — complete with mob involvement, prison time and family tragedy — Hacker says despite his successes "You get 10,000 nos before you get a yes. I really connect with that. They go through gigs and they do a bunch of one-nighters when they were starting out and it was really hard for them. The show is 30 minutes of getting to where they were."

The show is a little condensed from the size of the Broadway company, - some roles have been blended together in part to fit on smaller stages as they tour the country, Hacker says. But otherwise the musical has not changed since it was first on Broadway.

And they get a lot of repeat business, Hacker says and he attributes that to the music. "People come up to me and tell me that "Can't Take My Eyes Off Of You" was their song when they first got married."

"I hear people all the time; they’ll come to me afterwards and say this is my 30th time. I always ask them why, why do you keep coming back. And they say they just love the story, they love the story of the guys. Of all the Four Seasons, you can relate with one of the Four Seasons some way. And I think that on top of that, people relate to the music with an emotion in their life."