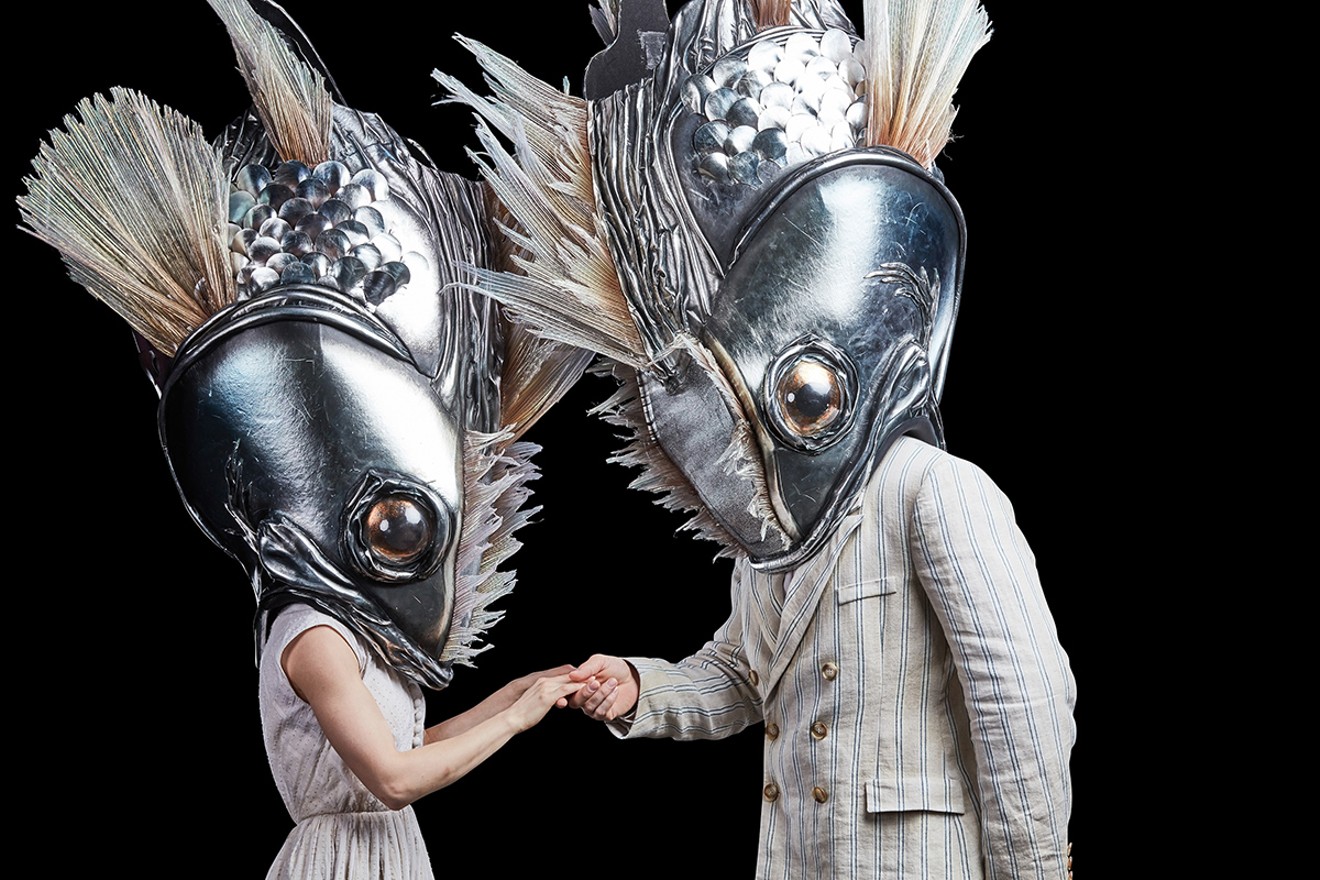 It's impossible to get bored during a Cirque du Soleil show, but there's a strong chance of missing one of the many "wow" moments in the action-packed light, sound and FX performance extravaganza.

"I find every time I watch our shows I see something different. Especially with the turntables, no matter where you’re sitting, the stagger-stacked action," says Jordyn Campbell, assistant head of wardrobe at Luzia by Cirque du Soleil.

Opening in Houston January 10, Luzia borrows from Mexico's rich culture and traditions, following our hero (a clown) as he is dropped into a field of magical yellow cempasuchil flowers (marigolds). 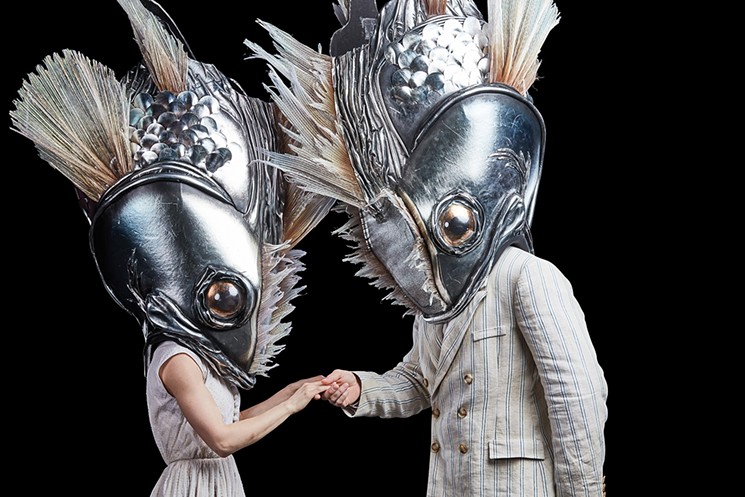 Costumed animals include a crocodile, iguana, cockroach, grasshopper, armadillo, snake, swordfish and tuna. Shown: Fish heads, costumes by Giovanna Buzzi / 2016 Cirque du Soleil
Photo by Matt Beard
"He remains in this surreal dreamscape of Mexico. It’s him finding his way through the semi-realistic, surrealistic world of Mexico and the characters he encounters along the way. The running woman, who represents the monarch butterfly, takes him through these different landscapes: a smoky saloon, a desert, the jungle," says Campbell.

True to any show inspired by our neighbor to the south, we'll see a luchador, jaguar, football (soccer), Day of the Dead celebrations, the marimba, guayabera shirts and a show-stopping fiesta finale.

Luzia — a hybrid of the Spanish words for light (luz) and rain (lluvia) — also is the first Cirque du Soleil show that utilizes real water. Which threw a giant curve ball for the costume department. 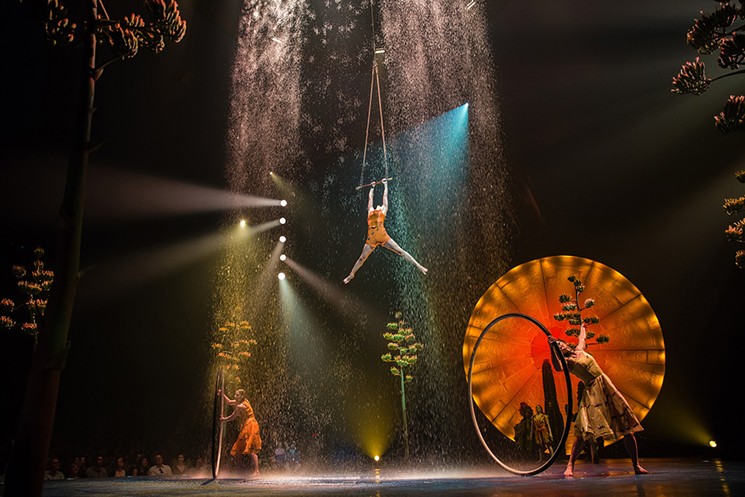 The cyr wheel and trapeze act incorporates a setting sun, quiotes (agave) plants and a rain shower. Shown: Roue Cyr and Trapeze, costumes by Giovanna Buzzi / 2016 Cirque du Soleil
Photo by Matt Beard
"It’s a fun challenge: the rain curtain, the pool, people that get wet and others who get fully submerged. We had to figure out what works best to maintain the longevity of the costumes," says Campbell. "All of the costumes are made at our international headquarters in Montreal and shipped to us. It’s our job to maintain them, do repairs, fittings, alterations for new artists joining the show.

"Just within the costume department we’ve got quite a few animal images. All of our musicians wear crocodile heads, their jaws move. We have fish heads, tuna, swordfish, a larger than life sized armadillo that one of the performers wears, a giant cockroach; really interesting imagery and animals from the jungle, desert and rainforest," says Campbell.

"I would say the rain curtain is one of the most astonishing moments in the show. I love hearing the people's reactions when they see it for the first time. It’s no small feat to travel with this equipment and this much water," says Campbell, adding that it's amazing to see how the costumes are built. "There is a mechanical flower dress that blooms on stage. People should watch for that; it's a really beautiful, special moment on stage." 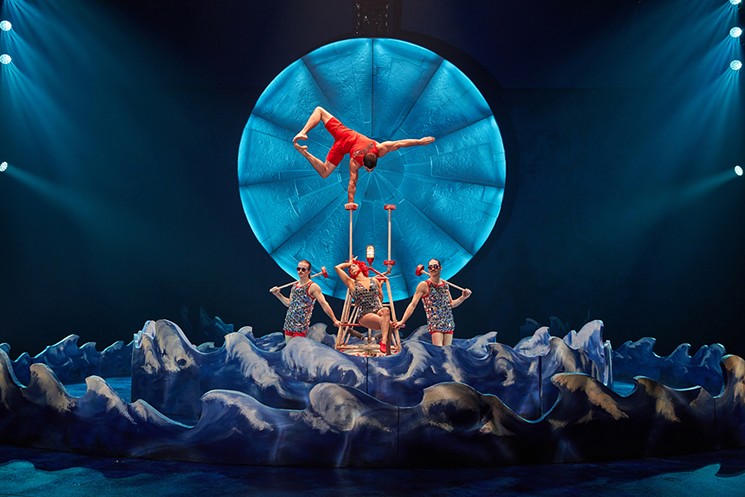 This scene is a tribute to Mexican cinema of the 1920s. A lifeguard builds a tottering structure out of canes under the command of an overzealous film director. Costumes by Giovanna Buzzi / 2016 Cirque du Soleil
Photo by Matt Beard
Campbell also happens to be the only Texan in the show, having been born and raised in Corpus Christi, so she's definitely looking forward to the upcoming Houston stop. "I am so excited. I’ve worked for Cirque du Soleil for over six years, it's my first time to work in Texas. I'm so thrilled and so proud to be here."

Anybody driving past Sam Houston Race Park after January 3 will get to view preparations for Luzia, which includes a newly designed white and gold big top that features printed patterns evoking the meeting of the sun and moon. The production travels in 65 trailer trucks with 2,000 tons of equipment and takes eight days to set up.

Cirque du Soleil's Luzia is scheduled for January 10 through February 24 at Sam Houston Race Park, 7575 North Sam Houston Parkway West. For information call 1-877-924-7783 or visit cirquedusoleil.com/luzia, $45 to $245.
KEEP THE HOUSTON PRESS FREE... Since we started the Houston Press, it has been defined as the free, independent voice of Houston, and we'd like to keep it that way. With local media under siege, it's more important than ever for us to rally support behind funding our local journalism. You can help by participating in our "I Support" program, allowing us to keep offering readers access to our incisive coverage of local news, food and culture with no paywalls.
Make a one-time donation today for as little as $1.