10 Best Bets This Weekend in Houston: Christmas on Stage and Holiday Lights

Stages Repertory Theatre presents Miracle on 34th Street: A Live Musical Radio Play. Photo by Amitava Sarkar
Thanksgiving isn't even upon us and Christmas is already in the air, but that's a good thing. With the country feeling divided it's important to remember we're all in this together, and holidays lights, theatrical productions and other events remind us of the importance of kindness, forgiveness and hope. But it's not all sugary sweet: we've thrown in a vampire musical, a revolutionary activist, a mechanical circus and more.

In a kinder, gentler era, it was totally conceivable that a man who claimed to be Kris Kringle could get hired without a background check. That unwavering belief soon gives rise to suspicions, an arrest and a chance to state his case in court. There's a good reason there have been so many treatments of the story, novel and multiple films set in the iconic Macy's department store. Just in time for the holiday season, Stages Repertory Theatre is bringing us the version adapted from Lance Arthur Smith's 1947 Lux Radio broadcast — Miracle on 34th Street: A Live Musical Radio Play — with original songs and arrangements by Jon Lorenz. The reviews are in and Jackera Davis's rendition of Susan Walker is "delightful," while Kevin Cooney is twinkly-eyed and thoroughly believable. A huge cast, a set that takes us back in time, and the joyful spirit of Christmas make this a must-see. Read our preview and review.

'Tis the season ... for vampires. But any arguments about whether you're Team Edward or Team Jacob are so last week. In the hands of Faith Fossett, the composer, lyricist and librettist of Pulsate: A Vampire Musical, the supernatural world is decidedly edgier, more immersive, and with an electronic pop beat. World-weary Vlad (Abraham Zapata) is ready to settle down with a new coven, head honcho Providence (Arianna Bermudez) believes the old ways are best, and The Singer (Jordi Viscarri Velásquez) is a sassy witch full of drama and attitude: a far cry from the actor's previous roles as Jack (Into the Woods) and Huck (Big River). Mai Le — winner of the Best Trouper award in 2019's Houston Theater Awards — plays the mortal Lilith, while Rachel Logue directs. Ancient weaponry abounds, and audience members are encouraged to cosplay as a vampire, witch or werewolf.

Pulsate: A Vampire Musical is scheduled for November 13-21 at 7:30 p.m. Mondays through Thursdays at Prohibition Theatre, 1008 Prairie. For information, visit pulsatemusical.com. $10 to $45.

Sometimes it takes a long time for the scars of high school to heal. Our universal experiences of surviving the era of cliques, jocks, nerds and bullies give rise to the very original, Dear Evan Hansen, currently on its national tour via Memorial Hermann Broadway at the Hobby Center. While the subject matter is dark, Stephen Levenson manages to impart the book with wit and just the right tone, set against the ear-pleasing rock score by Benj Pasek and Justin Paul (The Greatest Showman, La La Land). The reviews are in and our critics label the teen drama breathtaking and a keeper, even venturing to say it's the first show with "such unabashed fervor and universal appeal" since Hamilton. No wonder it won both the Tony® and Grammy® for Best Musical. Read our preview and review.

Dear Evan Hansen continues through November 24 at 7:30 p.m. Tuesdays through Thursdays, 8 p.m. Fridays, 2 and 8 p.m. Saturdays, 2 and 7:30 p.m. Sundays at the Hobby Center, 800 Bagby. For information, call 713-315-2525 or visit houston.broadway.com. $55 to $125. With a special digital ticket lottery available for a limited number of $25 tickets each performance. The lottery began accepting entries 48 hours before the first performance. 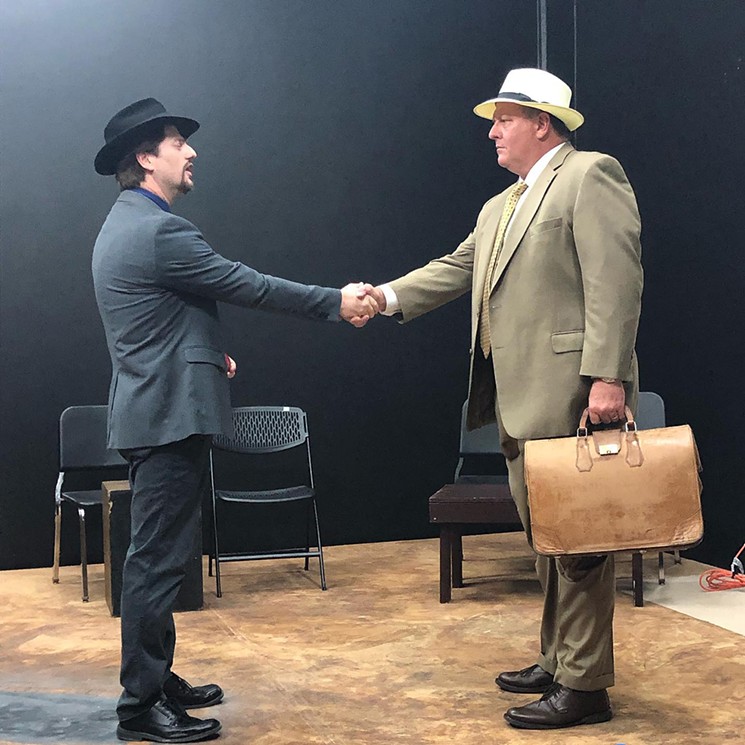 Brian Heaton as a reporter and John Raley as Henry Drummond.
Photo by Christine Weems

Art often imitates life. While some of us are tuned into the impeachment hearings, others are burying their heads in the sand, and on a different stage Cone Man Running Productions is presenting Inherit the Wind, a fictionalized account of the Scopes Monkey Trial written by Jerome Lawrence and Robert E. Lee. Directed by the Honorable Christine Weems, a Texas District Court Judge who practiced as an attorney for almost 20 years, the cast also has been sprinkled with a few practicing lawyers. Stepping into the shoes of Henry Drummond — a character based on civil rights lawyer Clarence Darrow — is none other than John Raley who in real life has overturned murder convictions for Michael Morton and Hannah Overton, as well as proving that death row inmate Alfred Dewayne Brown is actually innocent of the crime: a ruling that makes him eligible for state compensation. Don't miss this return to the courtroom to see who won the battle of religion versus science in 1925. Would the outcome be any different today?

It wouldn't be a Christmas play without carols, cute child actors, and messages of family, faith and forgiveness. The Ensemble Theatre checks all the boxes, and then some, when it presents the world premiere of More Than Christmas. Penned by Celeste Bedford Walker, the same playwright who brought us Sassy Mamas and Camp Logan, and directed by Artistic Director Eileen J. Morris with musical direction by Stephanie Blue, the musical incorporates original music that's sure to inspire. In addition to the aforementioned child actors — cutest by the half dozen — we'll see more than a few familiar faces in the cast: An'tick Von Morphxing ('da Kink in My Hair), Regina Hearne (a finalist for Best Supporting Actress in the 2019 Houston Theater Awards), Werner Richmond (The North Star: An Urban Nativity), Eboni Williams (Sistas: The Musical), as well as Kartez Jackson, Liz Rachelle, Ronson Hawkins and Vivian Reed. Couldn't we all use a bit of holiday cheer?

Kinder Lake will look different over the next few months.
Photo by Morris Malakoff, The CKP Group
Everything's bigger in the Lone Star State, and here in H-Town we've got extra bragging rights because the largest outdoor ice-skating rink in the Southwest is right here at Discovery Green. It's kinda cool (pun intended) how they transform the water from Kinder Lake, using renewable energy, to create the environmentally friendly and sustainable The ICE powered by Green Mountain Energy®. We totally get it if you don't own a pair of ice skates, but you can rent a pair for just $4 or, if you're a Forever Green member, the skates are free. If you're feeling a little wobbly, one-on-one instruction is available, and there's even a separate pint-sized rink for those who are less than 45 inches tall or younger than age four. Users of non motorized wheelchairs can even enjoy The ICE for free if an adult is in tow. Then mark your calendars for Frostival on November 22 and be ready to watch the ice chips fly.

The ICE powered by Green Mountain Energy® is scheduled for November 15-February 2 from 5-10 p.m. Mondays through Thursdays, 5 to 11 p.m. Fridays, 11 a.m. to 11 p.m. Saturdays, Thanksgiving and school holidays, 11 a.m. to 8 p.m. Sundays, plus special hours for Christmas and New Year's Eve and Day at Discovery Green, 1500 McKinney. For information, visit discoverygreen.com/ice. $11 to $20.

Life as a farm worker is never easy, but there was a time when it was downright brutal with low wages, no access to cold water or toilets, cancer from exposure to pesticides, and dirt-poor conditions in the quarters. As a teenager Dolores Huerta became angry at the racial and economic injustices she saw in California's agricultural valley and she later teamed up with Cesar Chavez to form what would become the United Farm Workers of America union. In fact, it was Huerta who coined the phrase Sí se puede (Yes, we can), a rallying cry that paved the way for grape workers to strike and for a national boycott of grapes. Now the Holocaust Museum Houston is set to open a temporary exhibit that shares the story of this legendary activist and leader in "Dolores Huerta: Revolution in the Fields / Revolución en los Campos," a bilingual exhibition that includes photographs, videos, a mural by Ignacio Sanchez, and a mobile tour smart phone app. Then reserve your seat for the November 21 free screening of the documentary film, Dolores. RSVP with Rocio Rubio at rrubio@hmh.org or 713-527-1838.

They had us at dinosaurs, but Magical Winter Lights® is so much more than its immersive The Dino. Expect 20 acres of more than 100 larger-than-life lanterns — some as tall as 60 feet — with a variety of themes (think the mysterious East and skylines of Houston), nightly acrobatic performances, plus carnival rides and games. The children can try their hand at Chinese arts and crafts, or meet characters such as the Ice Sisters and Santa Claus. The lantern sets are restyled and redesigned eachyear, bringing something new, and our advice is to charge your cameras and smart phones because this is one Insta-friendly spectacular.

Magical Winter Lights® is scheduled for November 15-January 5 from 5-10 p.m. Sundays through Thursdays, 5 to 11 p.m. Fridays, Saturdays and Thanksgiving Day, on the grounds of Gulf Greyhound Park, 1000 FM 2004, La Marque. For information, visit magicalwinterlights.com. Free to $76, plus $5 for parking.

Cirque Mechanics comes to Miller Outdoor Theatre.
Photo by Maike Schulz/Maike Photo Live
Step right up folks and witness the amazement that happens when circus life meets technology in Cirque Mechanics: 42FT - A Menagerie of Mechanical Marvels. That's a mouthful, for sure, so let's unpack. While it is inspired by the modern circus, wrapping the show in acrobatics, aerialists, mechanical wonders and clowning around, the action that takes place within the 42 foot ring is anything but conventional. Expect a galloping mechanical horse made of metal, a tent frame that rotates, and a narrative that is both historic and refreshingly raw. Kids, don't try this at home.

Galveston gets a makeover come wintertime and Moody Gardens is no exception. Holiday in the Gardens features eight holiday attractions at one venue, including the multi-colored Festival of Lights and Ice Land which has a "Christmas Around the World" theme for this year's edition. The fun continues with 3D holiday films, a screening of Rudolph in 4D, an Arctic slide, train rides, photos with Santa Claus and live entertainment. Come early to see it all, but consider staying the night because Festival of Lights doesn't begin until 6 p.m.

Holiday in the Gardens is scheduled for November 16-January 12 from 10 a.m. to 10 p.m. daily and Christmas Eve, noon to 10 p.m. Christmas Day at Moody Gardens, One Hope Boulevard, Galveston. For information, call 409-744-4673 or visit moodygardens.com/holiday_season. $30.95 to $45.95.
KEEP THE HOUSTON PRESS FREE... Since we started the Houston Press, it has been defined as the free, independent voice of Houston, and we'd like to keep it that way. With local media under siege, it's more important than ever for us to rally support behind funding our local journalism. You can help by participating in our "I Support" program, allowing us to keep offering readers access to our incisive coverage of local news, food and culture with no paywalls.
Make a one-time donation today for as little as $1.