Explore the New Menil Drawing Institute, at the Intersection of Zen and Cool 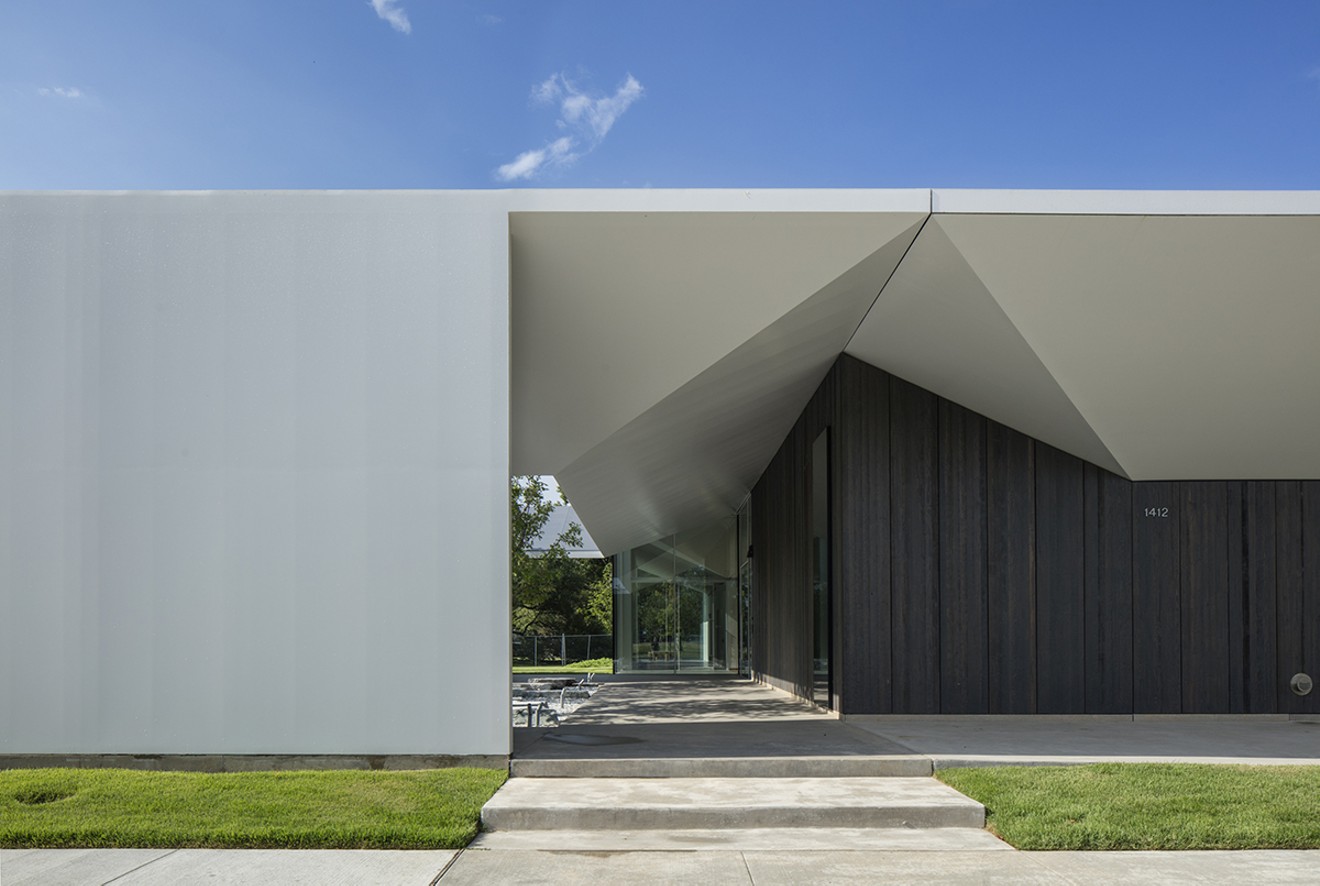 The Menil Drawing Institute, detail of south elevation and west courtyard. The public is invited to a ribbon cutting, dedication and opening on November 3, 2018. Photo by Richard Barnes
The late philanthropist and art collector Dominique de Menil had very strong opinions, and wasn't afraid to share them. But were she here to see the unveiling of the new Menil Drawing Institute — the fifth art building on the 30-acre campus — our bets are that she would declare the structure perfect in every way.

The divine architecture, rendered in cool steel, soft grays and European white oak flooring, dances a sublime pas de deux with the exterior landscaping and light. But don't take our word for it: The public is invited to the dedication and public opening tomorrow (November 3), with a ribbon-cutting at 10 a.m. followed by a day-long community festival with tours, musical performances, art-making activities and food trucks.

The west courtyard of the Menil Drawing Institute.
Rendering courtesy of Johnston Marklee / Nephew
For those approaching from the west, notice how the 10,000 foot candles of our bright, Texas sun drop to just five foot candles. The architectural canopy of the 60 foot by 60 foot open square courtyard, one of three that anchor the 30,000 square foot building, work together with the trees to reduce the sun's impact.

That premise carries through to the Living Room, a space that needs few ceiling-mounted lights and which serves as a segue into the adjacent, and much dimmer gallery space that holds the MDI's inaugural exhibit: "The Condition of Being Here: Drawings by Jasper Johns."

Jasper Johns, Untitled, 1990. Watercolor and graphite pencil on paper.
© Photo by Jasper Johns / Licensed by VAGA, New York
While other museums and institutes have devoted areas solely to drawings, the Menil Drawing Institute is the first freestanding facility in the United States devoted to the acquisition, study, exhibition, storage and conservation of modern and contemporary drawings. But what is a drawing, in museum speak? They're classifying it as unique works on paper, no prints, which means that there is at least one three-dimensional work, an untitled collage from 1977, in the 41-object Johns exhibit. Walk through the gallery and notice how often targets and flags appear in his works that range from 1954 to 2016, then realize that, yes, the artist rubbed his body on drafting paper to create the charcoals Study for Skin 1, Skin 1 and Skin.

On the press preview we were treated to several other spaces that might not be on the public tour. So here's the "behind the scenes" tour. The gallery space actually contains two windows, though they are obscured by interior walls during the current exhibit. There is an underground storage area that can safely hold flat drawings as well as upright framed works. If we ever experience another Tropical Storm like Harvey the Menil Drawing Institute should be fine — the grounds are a bit elevated and they have all that porous landscaping — but just in case there are flood gates that can be activated even when the power goes out.

The heart of the building is the Janie C. Lee Drawing Room, designed for up close study by scholars and researchers, an intimate space that on any given day displays drawings by Robert Rauschenberg and Dorothy Hood. The Suzanne Deal Booth Conservation Lab is just down the hall and has access to the loading dock, microscopes and analytical equipment, and a lighting and scrim system that can transition from full sunlight to dim to complete blackout.

Perhaps the most sublime space of all, however, is the interior walkway adjacent to the Scholars' Cloister. It might not be open to the public on a regular basis but can be viewed from the Living Room and features 13 magnolia trees that, once fully mature, will provide a wonderful, dappled light. Fractured fragments of Vermont marble can be found in all three courtyards, the same material that appears on the wall of the public restrooms in the Annex, just off the Living Room. Here visitors will find a subtle nod to The Menil Collection in the form of a heptagonal ottoman, smaller in scale to the one in the main building.

Two iconic sculptures — Rift and Dissipate, both by Michael Heizer — have been moved from the main building lawn to just east of the Menil Drawing Institute. Ellsworth Kelly’s Menil Curve sits just outside the west entrance. And no, you're not crazy, the Energy Building — the central plant where all the electrical nuts and bolts do their magic — has actually been relocated, making way for better views of the Cy Twombly Gallery.

The Menil Drawing Institute Community Celebration opens to the public November 3, with food trucks and activities from 10 a.m. until 4 p.m.


The Menil Drawing Institute's inaugural exhibit, "The Condition of Being Here: Drawings by Jasper Johns," is scheduled for November 3-January 27, 1412 West Main, 713-525-9400, menil.org, free.
KEEP THE HOUSTON PRESS FREE... Since we started the Houston Press, it has been defined as the free, independent voice of Houston, and we'd like to keep it that way. With local media under siege, it's more important than ever for us to rally support behind funding our local journalism. You can help by participating in our "I Support" program, allowing us to keep offering readers access to our incisive coverage of local news, food and culture with no paywalls.
Make a one-time donation today for as little as $1.