The Real Renaissance Festival Party Happens In The Campground 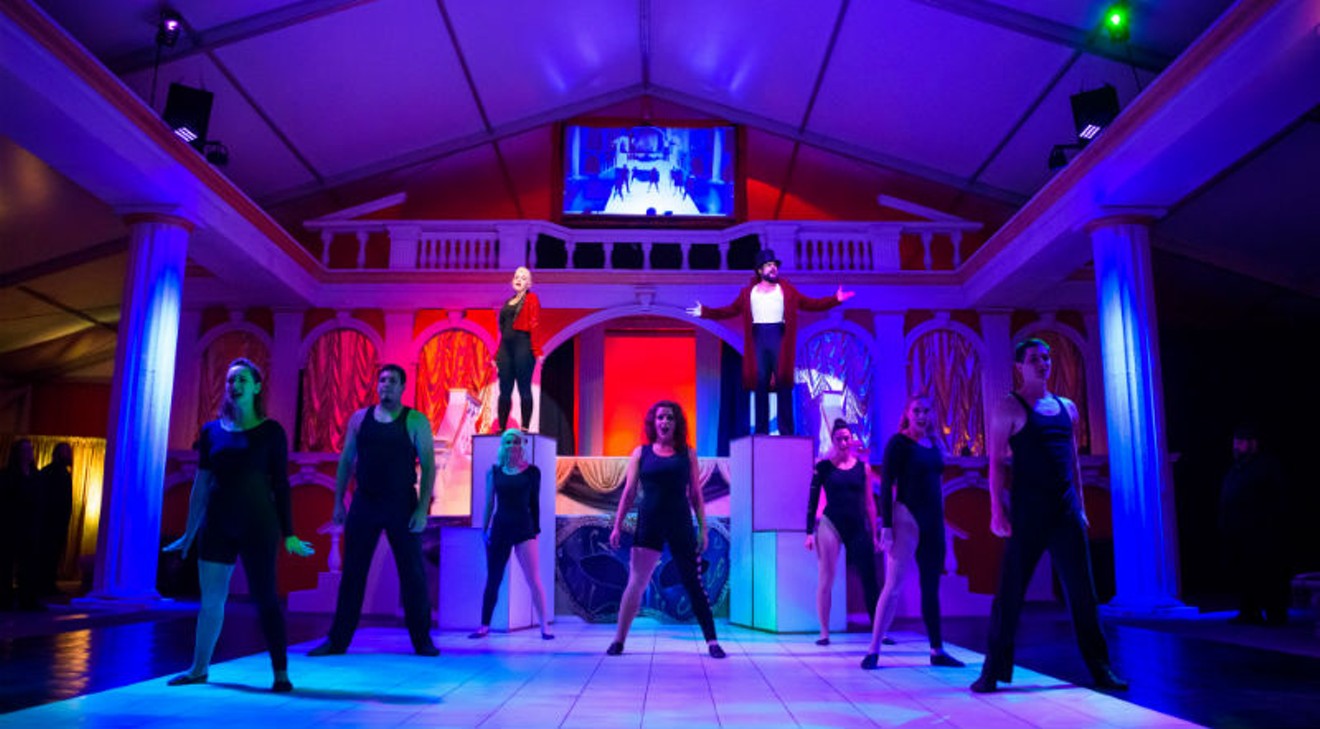 Dainty cheese platters greeted VIP guests in their reserved alcoves, and bottle service was optional for any and all— though it appeared most preferred to hit up either of the two bars. Grecian columns flanked a large, white dance floor; all the trappings of a proper throw down—albeit a bit bright. A very flexible dance troupe opened the night with a few performances; entertainment befitting the esteemed lords and ladies in attendance of the second to last, and most busy, Renaissance Festival weekend thus far.

Meanwhile, in the middle of the adult campground, a much steamier fête began to fabricate. A 20-minute wander to the center was marked by colorful scenery along the way; ‘cue’s raged, LED lights tickled pine trees as an array of American, pirate, and personal flags and decorations donned the temporary homesteads throughout.

Soon enough, the dim road gave way to a small clearing where groups, large and small, gathered at different points of interest; here are a few worth noting:

“Drop your pants, and sing ‘I Feel Pretty,” a gentleman jovially instructed over the loudspeaker.

It was definitely not the worst two by four that would be pulled in a game of Naked Jenga that night. A crowd six people deep surrounded the small pirate-ship themed arena, a “Call Of Booty Plunderdome” banner draped overhead, while nearby another sign, “No Pictures Aloud” hung. The thick cluster protected contestants from too many prying eyes, because if you were unfortunate enough to knock the whole thing over, the only way to re-stack the tower was to strip naked and complete a lap around the ring first. Captain Morgan made for a great host—as he tends to do.

“Are you going to try it?” A woman asked. Her purse hung heavy across her chest.

“YES.” She responded, reaching within to hand over a piña colada Jell-O shot. 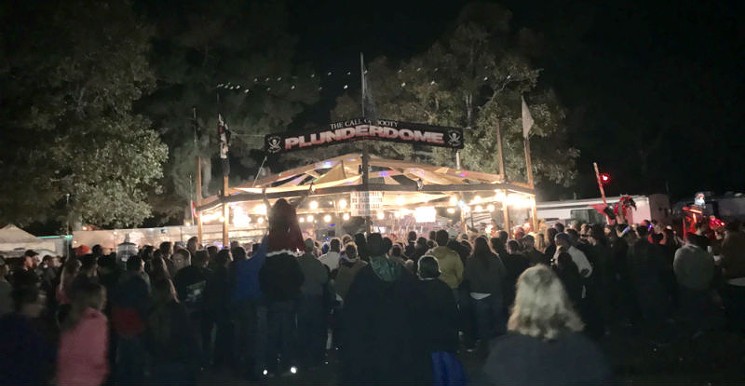 Game for a little Naked Jenga at the Plunderdome?
Photo by Kate McLean
Splinters of fire crackled into the night as a large bonfire raged and the primal thumping of a bongo group commenced. Their contribution slowly began to crescendo in number and in volume, which transferred to wild movements from those standing closest. A cheeseburger, followed by a squid danced by, while their friend, a dairy cow, trailed behind them. All manner of costume were present though the pair of shirtless gladiators especially did it for the Houston Press. 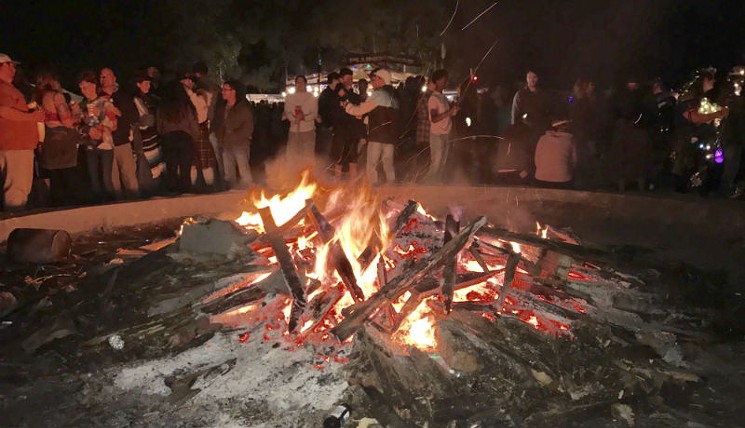 The adult campground was lit all right.
Photo by Kate McLean
One campsite drew attention with an inflatable clown that towered into the dark sky while below it, a more evil-looking counterpart spun a fast-paced Euro-techno set.

Next door to the clowns, a rather fit gentleman practiced acrobatics on a tetherball pole—though the ball and string were nowhere to be found.

Bob Marley tapestries swung in the breeze, revealing behind them a Jäger machine in operation; doing what it does best—igniting a chain reaction of well thought out decisions.

Hookah, cigars, and glow-sticks were available for rent and sale at a tent labeled CIGAR. Beanbags strewn 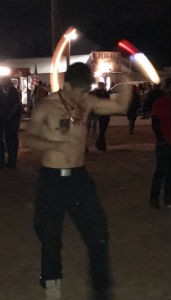 Get it, boy.
Photo by Kate McLean
about made it easy for knights and their ladies to get their ‘cush on while grabbing a quick smoke.

An abandoned beer pong tournament, with an almost empty bottle of Fireball would have any archaeologist pointing toward the small cove of food and drink offerings located off the main road. Different groups convened on picnic benches as California Love blasted on a four speaker sound system.

A highlander walked by clutching a pizza box, as others waited patiently in line. The Texas Fatboy Syndicate food truck served up chicken tenders, burgers, corndogs, and even chicken fried steak.

The Drink Shack next door had Jell-O shots in ramekins, there you are, flavored daiquiris and the curiously coined, King’s Squirt for $8.

“What’s in it?” I asked, surprised when she handed over a red Jell-O shot syringe.

“A little bit of everything,” she responded in a thick, country accent, the twinkle in her her smile reaching all the way up to her eyes.

It took both hands and about 30 minutes to fully detonate the King’s Squirt—and it became quickly evident that by “a little bit of everything,” she meant, Everclear.

“3-6-9,” popped louder now as booties went to work, and more people filed into the warm, liquid center of the campground. Overhead, an invisible air of festivity circulated contagiously.

Upon passing the karaoke tent, apparently, someone had kissed a girl and had liked it— another stark contrast to the slow Donna Summer ballad currently being sung in the same fashion inside the Time Travelers Ball.

In any case, both the nobles with their shiny chalices and the peasants clutching 16 ounces made merry late into the night, with the simple difference somewhat like the Commodores versus Dr. Dre.

But, the best part of both parties was—there’s still one weekend left.
KEEP THE HOUSTON PRESS FREE... Since we started the Houston Press, it has been defined as the free, independent voice of Houston, and we'd like to keep it that way. With local media under siege, it's more important than ever for us to rally support behind funding our local journalism. You can help by participating in our "I Support" program, allowing us to keep offering readers access to our incisive coverage of local news, food and culture with no paywalls.
Make a one-time donation today for as little as $1.