A Hitchhiker's Guide to Christmas Village at Bayou Bend 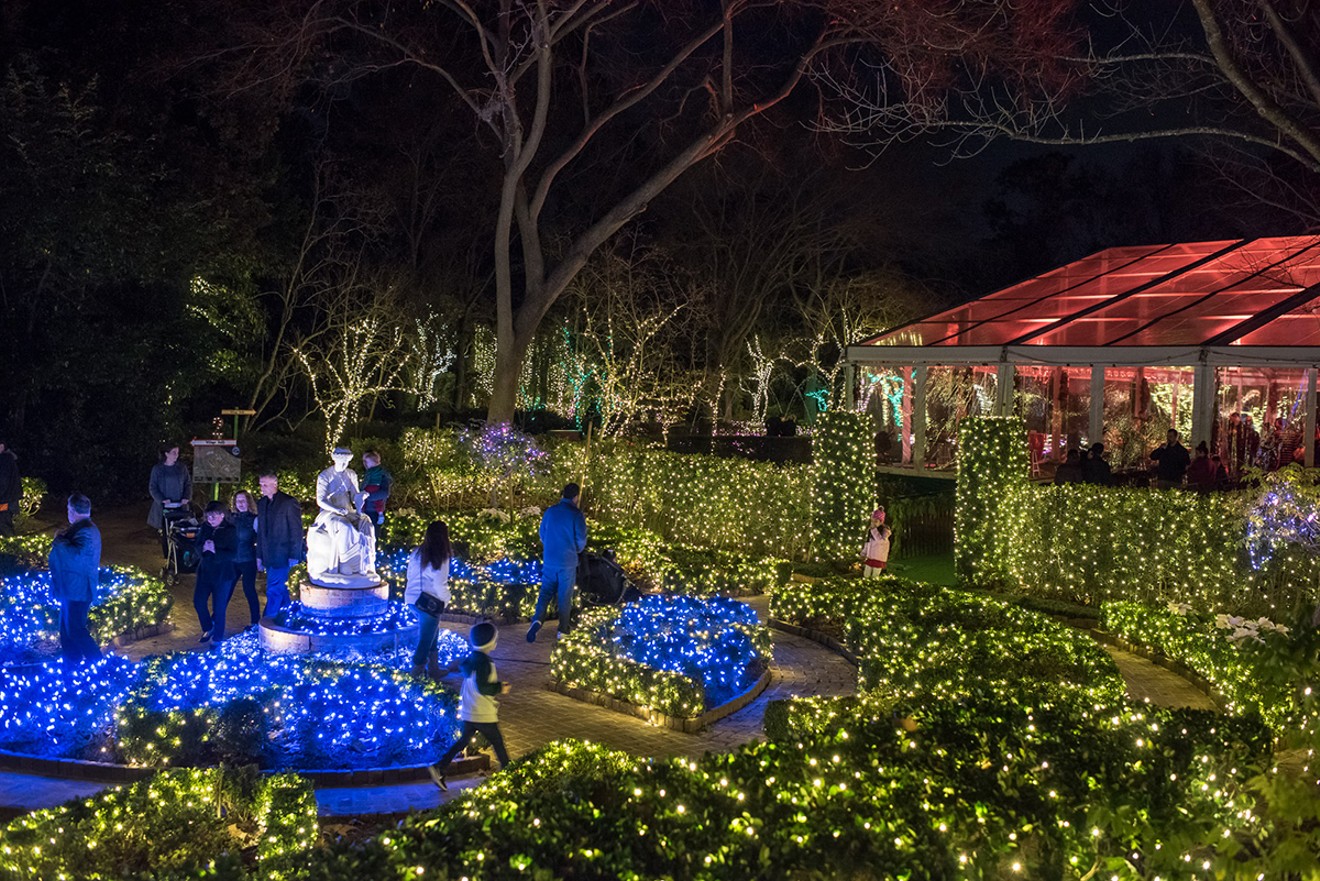 "Poor Santa. This was his third try and he can’t seem to hit the roof of the house. Once again he crash landed on the south lawn. All of the reindeer ran off; they saw this beautiful village and wanted to go exploring," says Bonnie Campbell, director of Bayou Bend, the Museum of Fine Arts, Houston's house museum for American decorative arts and paintings. "Rudolph has stayed behind; he's upset with Santa for crashing the sleigh."

So cool thing No. 1 is when guests are given red dots and a card with the missing reindeer names. "They have to go around to find all the reindeer; they've hidden themselves across the 14 acres of the property," says Campbell, noting that some of them are well hidden. "A lot of times the parents will come up to us, 'Please tell me where Donner is. We’ve found seven reindeer; we want to go home.'" In those instances a staffer will whisper the location in the parent's ear so the kids can complete their mission and earn the title of Reindeer Wrangler.

By the time Christmas Village comes to an end, the carolers will have sung for a total of 68 hours over 17 nights. Shown are The Mistelstones from a previous season.
Photo by Cameron Bertuzzi, courtesy of the Museum of Fine Arts, Houston
Cool thing No. 2 — and something that the northern states take for granted — is faux snow. Engage in a snowball fight with cotton snowballs in the gardens and pummel your siblings mercilessly. "We estimated that during the Christmas Village season over 60,000 cotton snowballs get thrown. It's quite something," says Campbell. "The most popular thing last year is our faux snow slide. You go down a 90 foot long sled run and it looks like snow. It’s fake snow; you ride down an inner tube. This year we’ve made the slope much steeper."

Cool thing No. 3 is the spirit of Christmas. They've put up more than 100,000 lights on the bridge and throughout the gardens. "What we've done, we've made the garden bloom during the winter with Christmas lights. The azaleas are pink, a lot of pink lights. The butterfly garden is multi-colored and the bridge is magically lit up. You get to walk around and stroll," says Campbell. Adding to the festivities are carols sung by the costumed Viva Vocé Victorian Carolers, a tent with a Christmas tree surrounded by running trains, vintage cartoons, music bell stations, photos with Santa Claus (but only through December 23) and a reindeer games area. "Kids love it. They put blow up antlers on their heads and their friend has blow up rings. They throw the rings on the antlers. It's fun."

Inside a large tent is a 15-foot tall Christmas tree with beautiful ornaments. Trains run around the tracks at its base with Victorian, New England and southwest-area villages.
Photo by Cameron Bertuzzi, courtesy of the Museum of Fine Arts, Houston
Cool thing No. 4 is a three-dimensional video that's projected onto the mansion. "It's really quite spectacular. People are mesmerized," says Campbell. "The sleigh will puff smoke, make lights, noise, you see the shadow of Santa trying to get in, you see him trying to climb up the house to get to the chimney. The house plays tricks: a mischievous elf pops his head out, the bricks come out to give a foothold, then go away. The poor man finally gets up there, a chair comes out, and he finally [seems to] get into the chimney."

Campbell calculates that, over the 17 nights of Bayou Bend's Christmas Village, Santa tries to make it down the chimney 1,500 times. For those guests who have upgraded their experience for a tour of Ima Hogg's mansion, the projection is a nice distraction while they're waiting in line.

Which brings us to cool thing No. 5: a theatrical, holiday-themed tour of the first floor of the house ($5 extra). It was designed by local theater actor Todd Waite (we've seen him in Alley Theatre's The Santaland Diaries) and the tour has all of the dramatic entertainment one would expect from a professional.

"Normally when you go to see something like this in a theater you sit in a chair and you look at it. Our show works so that you walk through the show and you go through [six rooms] on the first floor of the house. As you get to each room there's a two-minute theatrical show with live actors, costumes, special effects and sound effects," says Campbell, adding that there are fun surprises along the way and live actors in most of the rooms.
The tour is not really appropriate for kids under age five, and no strollers are allowed. There is limited space on the tours, so our insider tip is to purchase tickets online in advance to guarantee your timed entry. "It's certainly well worth it," adds Campbell.

Christmas Village at Bayou Bend With Santa and His Reindeer is scheduled for December 14-January 5, 5:30-9 p.m. Wednesdays, Thursdays and Sundays, 5:30-10 p.m. Fridays and Saturdays, 6003 Memorial Drive, 713-639-7750, mfah.org/a/christmas-village-at-bayou-bend, free to $23.
KEEP THE HOUSTON PRESS FREE... Since we started the Houston Press, it has been defined as the free, independent voice of Houston, and we'd like to keep it that way. With local media under siege, it's more important than ever for us to rally support behind funding our local journalism. You can help by participating in our "I Support" program, allowing us to keep offering readers access to our incisive coverage of local news, food and culture with no paywalls.
Make a one-time donation today for as little as $1.