With a history that dates back 50,000 years (or more) to Mungo Man LM3 and Mungo Lady, and on a continent that at one time supported 500 different language groups, the histories of the Aboriginal and Torres Strait Islander peoples have been preserved through songs, performances, oral histories, sculptures and paintings.

So while we're viewing thousands of years of indigenous history in The Menil Collection's just opened "Mapa Wiya (Your Map’s Not Needed): Australian Aboriginal Art from the Fondation Opale" exhibition, it's remarkable in that the more than 100 objects were created since the 1950s — a sort of time traveling phenomenon that will speak to all of us on primordial level.

Minyma Tjutangku Kunpu Kanyini (detail).
© Photo by Fondation Opale, copyright Agency/Artists Rights Society, courtesy of The Menil Collection
The exhibit includes large scale acrylic or synthetic polymer paintings — some created as part of a collaborative and others solo endeavors — where it's easy to imagine the artist working just inches from the canvas, placing his or her imprints with a paint covered dotting stick. It is only by stepping back and away from the canvas that the full beauty of these intricate designs is revealed.

Minyma Tjutangku Kunpu Kanyini, shown in detail here and at the top of this page, is a large collaboration (about 59 by 118 inches) by Maringka Baker, Teresa Baker, and Kani Tunkin. Another large scale work, this time in a palette of green, was painted by Maringka Baker. Palyani Tjungula, a large scale painting by the Spinifex Men's Collaborative, adds blue tints to the red, black and white pattern work.

The indigenous peoples of Australia, and their sense of belonging to country as a state of mind and being, is represented in these paintings. On a superficial level we see patterns, shapes and interlocking lines that remind us of Frank Stella or Keith Haring, but hidden within these paintings are ancient secrets that can only be revealed through decades of indoctrination.

Tragedy, injustice and the fight to reclaim rights and land usage also are represented in the objects. 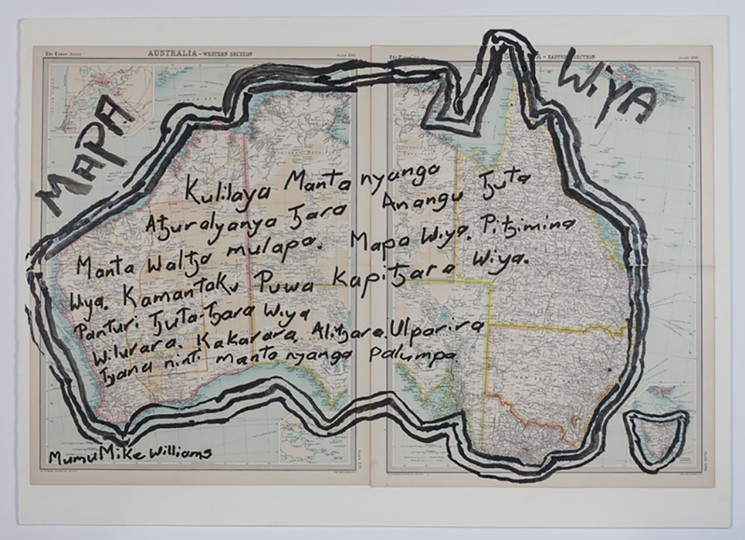 There's political activist Kunmanara (Mumu Mike) Williams — whose map paintings lend the show its title — and who argued through his art that they don't need the printed geographic maps and paved roads of the white man; the indigenous people already know exactly where they are.

And then there's the haunting Bedford Downs Massacre by Paddy Nyunkuny Bedford Jawalyi, with graphic ochre pigments on Belgian linen. It tells the 100-year-old story of how white settlers found guilty a group of men from East Kimberley; they asked them to chop trees and then fed them poisoned food and burned their bodies on the wood. A couple of witnesses saw the massacre and the incident became another chapter in the oral narrative.

More is more when it comes to the installation of the vertical hollow log coffins, also known as larrakitj or lorrkkon. After a body is decomposed the bones are placed inside, and the logs are painted with amazing and intricate designs, predominantly using the colors of black (to represent skin), white (for bones), yellow (for the liver and other organs) and red (blood). Arranged within two settings in one of the gallery spaces, as well as at the entrance to the exhibition, they are stunning in their detail.

Pulyunya (Site associated with the Dreaming), by Fred Grant, Pitjantjatjara language group.
© Photo by Fondation Opale, copyright Agency/Artists Rights Society, courtesy of The Menil Collection
While some of the 60 artists included in this exhibition are unknown, others have received international acclaim. One of the better known artists, Rover Thomas Joolama, favors a palette of earth tones and natural ochres. When he traveled to see the Venice Biennale in 1990 he took one look at a Mark Rothko painting and declared, "That bugger paints like me."

Joolama has three paintings in the show; he learned his family's history after his mother died, met her spirit beings, witnessed the destruction by Cyclone Tracy in 1974, and thereafter visited her son through a series of dream visitations.

No discussion of Aboriginal art in Houston would be complete without mentioning Booker•Lowe Gallery, which has been showcasing indigenous art since 2002. Nana Booker and M. David Lowe were among those who helped provide funding for this Menil exhibition, and their gallery opens "Beyond Time" this Saturday, in partnership with Australia's Coo-ee Gallery.

"Mapa Wiya (Your Map’s Not Needed): Australian Aboriginal Art from the Fondation Opale" is scheduled through January 26 from 11 a.m. to 7 p.m. Wednesdays through Sundays at The Menil Collection, 1533 Sul Ross. For information, call 713-525-9400 or visit menil.org. Free.

Public programs at The Menil Collection:

Saturday, September 14, 11 a.m.-3 p.m., Community Day
- 11 a.m., Stanley Gawurra Gaykamangu will present a musical performance
- Noon, The Alabama Coushatta Tribe of Texas will perform dances from regional powwow celebrations
- 1:30 p.m., Dancer/choreographer Amrita Hepi will lead an hour-long collaborative dance workshop
KEEP THE HOUSTON PRESS FREE... Since we started the Houston Press, it has been defined as the free, independent voice of Houston, and we'd like to keep it that way. With local media under siege, it's more important than ever for us to rally support behind funding our local journalism. You can help by participating in our "I Support" program, allowing us to keep offering readers access to our incisive coverage of local news, food and culture with no paywalls.
Make a one-time donation today for as little as $1.