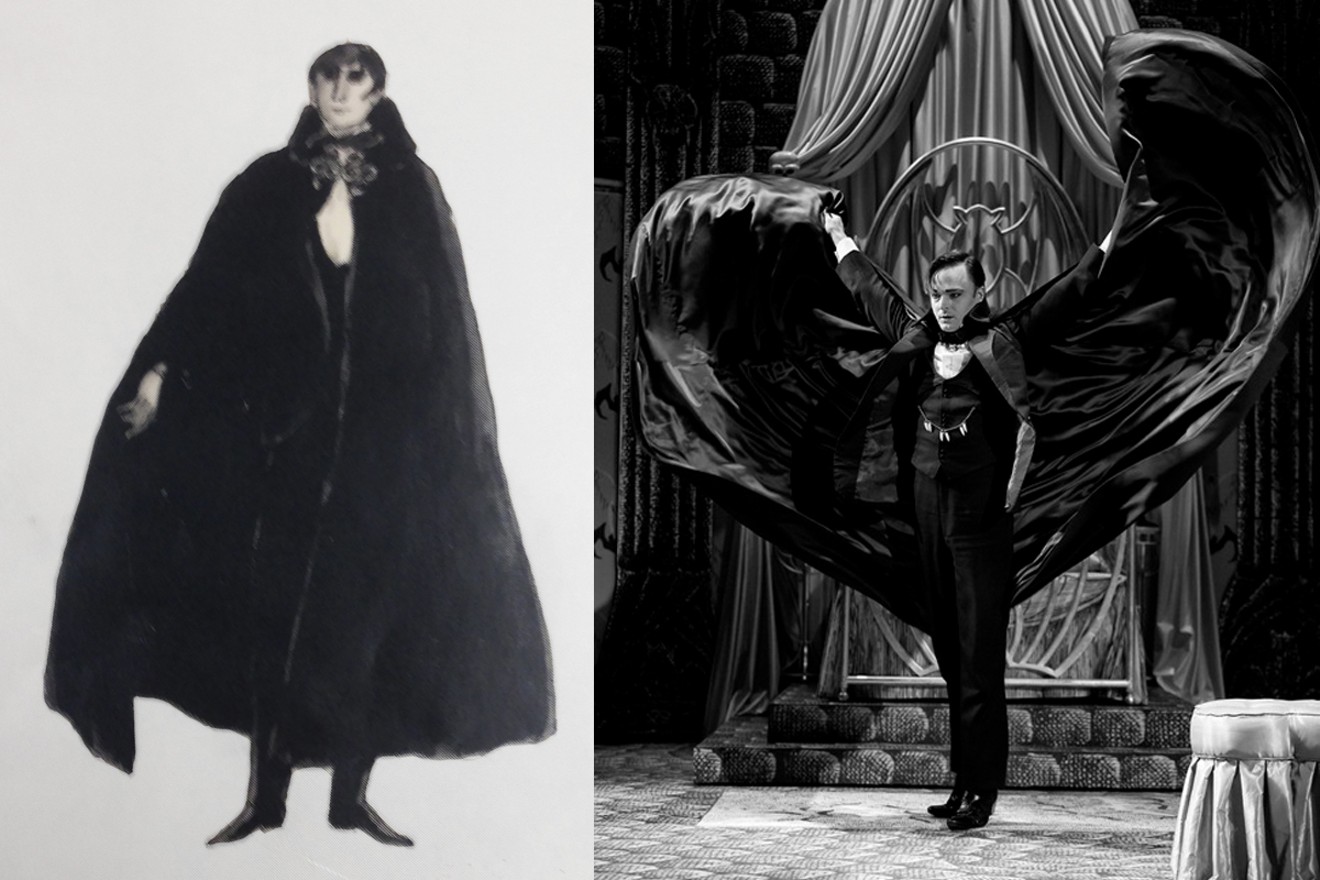 Sally Reynolds, curator of the upcoming "DRACULA!" exhibit for Brookfield, organized in partnership with the Alley, promises she won't subject visitors to any such torture.

What visitors will find are illustrations by Edward Gorey, who won a Tony Award for Best Costume Design in the Broadway 1977 revival of Dracula starring Frank Langella, as well as a nomination for Best Scenic Design.

Gregory Boyd, who at the time was artistic director for the Alley Theatre, saw that Broadway production five times and wanted to recreate Gorey's illustrations at the Alley, calling for a palette that was primarily black, gray and white with restrained pops of red.

Reynolds says we'll also see costumes and set pieces from the Alley production, including tables and pedestals. "You’re going to see her bed, Lucy’s bed, and the coffin cover," says Reynolds. The original coffin cover was damaged during Hurricane Harvey but the Alley has produced a replica for this exhibit.

"We are actually reproducing the bat wallpaper on one wall. On another wall we will have a reproduction of a portion of the library that was used by the Alley. It’s going to be a fun exhibit painted in blood red and it will have the costumes for Lucy and Dracula and related characters," says Reynolds. "We have Lucy, we have Professor Van Helsing, Harker, Renfield the cuckoo guy, the attendant. Dracula for sure."

Tricia Barsamian handled the costume coordination for the Alley in 2014 and Hugh Landwehr handled the scenic coordination, relying heavily on his assistant and Photoshop guru Anshuman Bhatia. It was a challenge for Landwehr to bring Gorey's cryptic stage directions to life for the Alley and so he filled in some of the blanks by referring to a toy theater that was produced shortly after the Broadway run.

Edward Gorey's Dracula: A Toy Theatre was produced after the Broadway run and features stage sets and furniture, plus a cast of eight, all set in the sanatorium of Dr. Seward, near the town of Purley, somewhere in the English countryside.
Sam Keck/YouTube.com
Reynolds says the exhibit includes a display of the Alley's set model as well as one of the toy theaters. Originally planned for last fall, "DRACULA!" was sidetracked by Harvey.

"It was to be installed right after Harvey blew in. We had already captured everything; all of the costumes were saved, pretty much the whole exhibit was saved," says Reynolds, adding that she learned much about Gorey's quirkiness during her research.

Reynolds says Gorey was meticulous and had been influenced by Lewis Carroll, Edward Lear and Agatha Christie. "He was a remarkable person; he was an unusual fellow," says Reynolds. "He was sardonic and had a macabre sense of humor and some of those costumes reflect quite well the characters."

She credits Brookfield's ongoing commitment to the arts in Houston, as well as their corporate generosity and outreach to the arts community, for making exhibits like this possible.

"DRACULA!" is scheduled for September 13 to November 9, from 8 a.m. to 6 p.m. Mondays through Fridays at  Total Plaza, 1201 Louisiana. There's a scene-stealing reception on October 3 from 4-6 p.m. The exhibit also will be viewable through the window during the evening hours. Visit artsbrookfield.com/houston.
KEEP THE HOUSTON PRESS FREE... Since we started the Houston Press, it has been defined as the free, independent voice of Houston, and we'd like to keep it that way. With local media under siege, it's more important than ever for us to rally support behind funding our local journalism. You can help by participating in our "I Support" program, allowing us to keep offering readers access to our incisive coverage of local news, food and culture with no paywalls.
Make a one-time donation today for as little as $1.