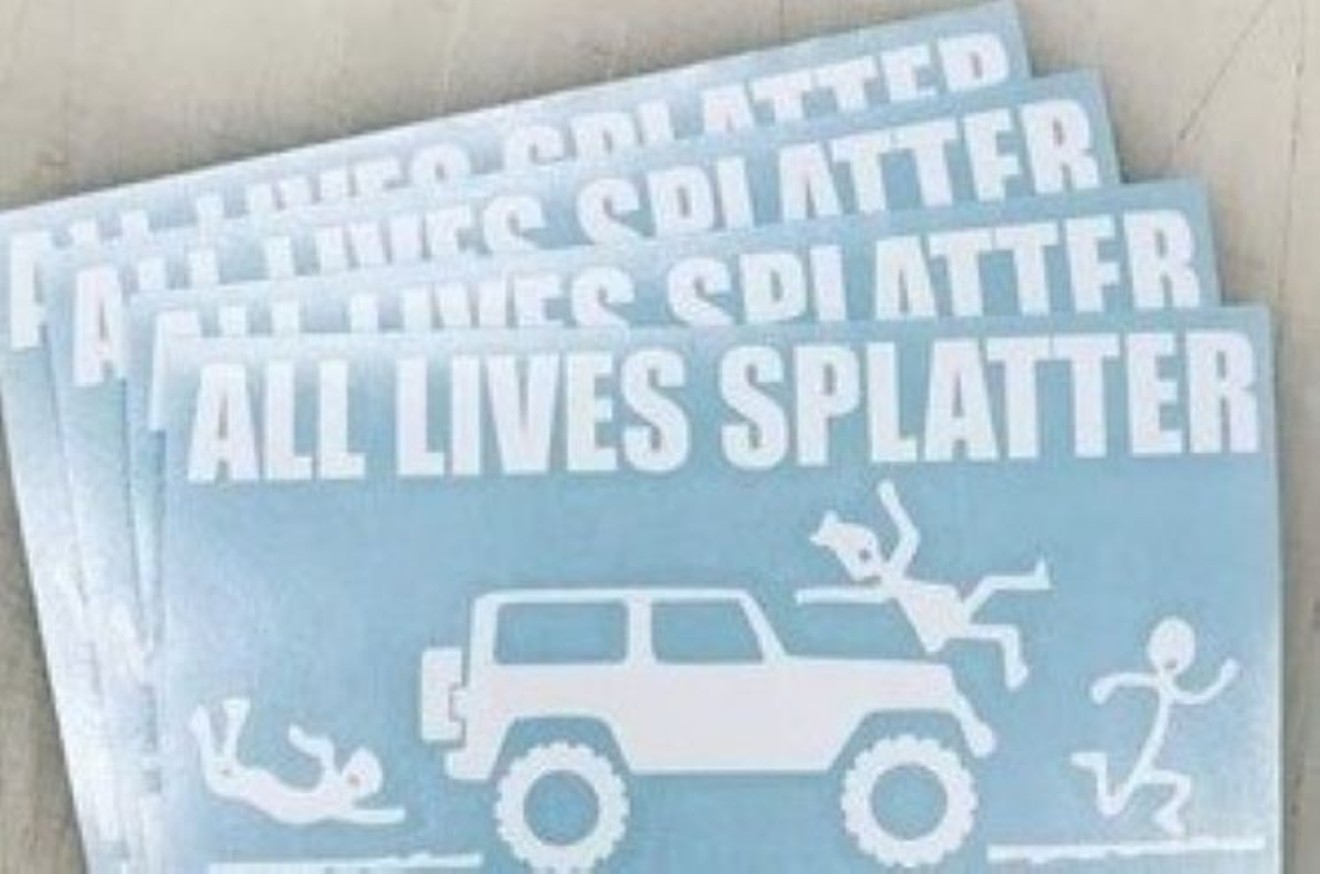 A car decal for sale that has since been removed from its graphics company website. Screenshot

In a startlingly offensive move, local graphics company Underground Graphics posted a car decal for sale with the slogan “All Lives Splatter” that contained a picture of someone driving a car through a crowd of people. It also contained the the message “no one cares about your protest.” The implication is that pushing a car through a group of protesters is humorous or desirable.

“Too soon?” said owner Greg Lilley in a Facebook share of the post which also told people not to take it seriously. The company makes racing stripes, car magnets, novelty license plates, and other customization materials. The post was accompanied by the hashtag “protest” and referred to the item as “now significant.”

Cars driving into protesters have become one of the enduring symbols of violence in the last several years. The most famous case is that of James Alex Fields Jr. using one to kill Heather Heyer and injure another 28 people at the Unite the Right Rally in Charlottesville, Virginia in 2017. More recently, there have been a string of incidences connected to the protests against the death of George Floyd at the hands of the Minneapolis police officer Derek Chauvin.

A tanker trailer drove into a protest crowd on I-35 in Minneapolis, though investigators there have said they don’t believe that the driver, Bogdan Vechirko, did so intentionally. No one was harmed. Two police vehicles drove into crowds in New York City. In Denver, a woman in a black SUV also accelerated into a crowd. All three incidences were captured on video. 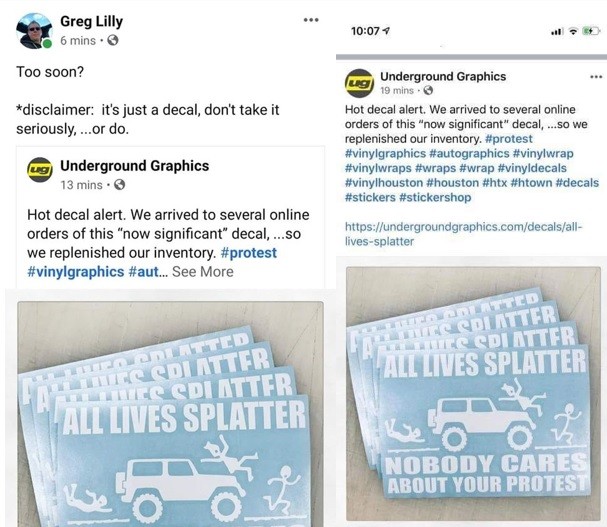 It’s an understatement to say that offering such a decoration for sale was in extremely poor taste given the history of violence between cars and protesters . The company faced immediate backlash, led largely by “Dirty” James McDowell, lead singer of the punk band Gen Why, who called it garbage. In the face of the response, Underground Graphics removed the item from their store and offered an apology after also deleting their original post.

“The ‘All Lives Splatter’ decal was posted this morning that was clearly wrong. The decal, among many others on our site, is in very poor taste. We do not condone or believe in the statement in which it makes. We recreate decals by request, again, among many in our catalog. We do not judge on their beliefs, statements, political views, religion, etc... Unfortunately, with all the chaos going on, our media dept made a horrible judgement to post this decal. We sincerely apologize for it and have removed the posts as well as the decal itself from our library. Again, UG does NOT condone this.”

Most of the decals offered for sale on their site are car culture based. They do sell a wide variety of Thin Blue Line decals.

The apology doesn’t address the apparent glee that their owner apparently found in the message. McDowell called the posts a “BS apology” from the local company.

“Yeah one of the local ones that I feel no sympathy for,’ he said. “One of the locals that helps divide. Fuck ‘em.”
KEEP THE HOUSTON PRESS FREE... Since we started the Houston Press, it has been defined as the free, independent voice of Houston, and we'd like to keep it that way. With local media under siege, it's more important than ever for us to rally support behind funding our local journalism. You can help by participating in our "I Support" program, allowing us to keep offering readers access to our incisive coverage of local news, food and culture with no paywalls.
Make a one-time donation today for as little as $1.