10 Most Intriguing Songs Van Halen Covered In Their Club Days 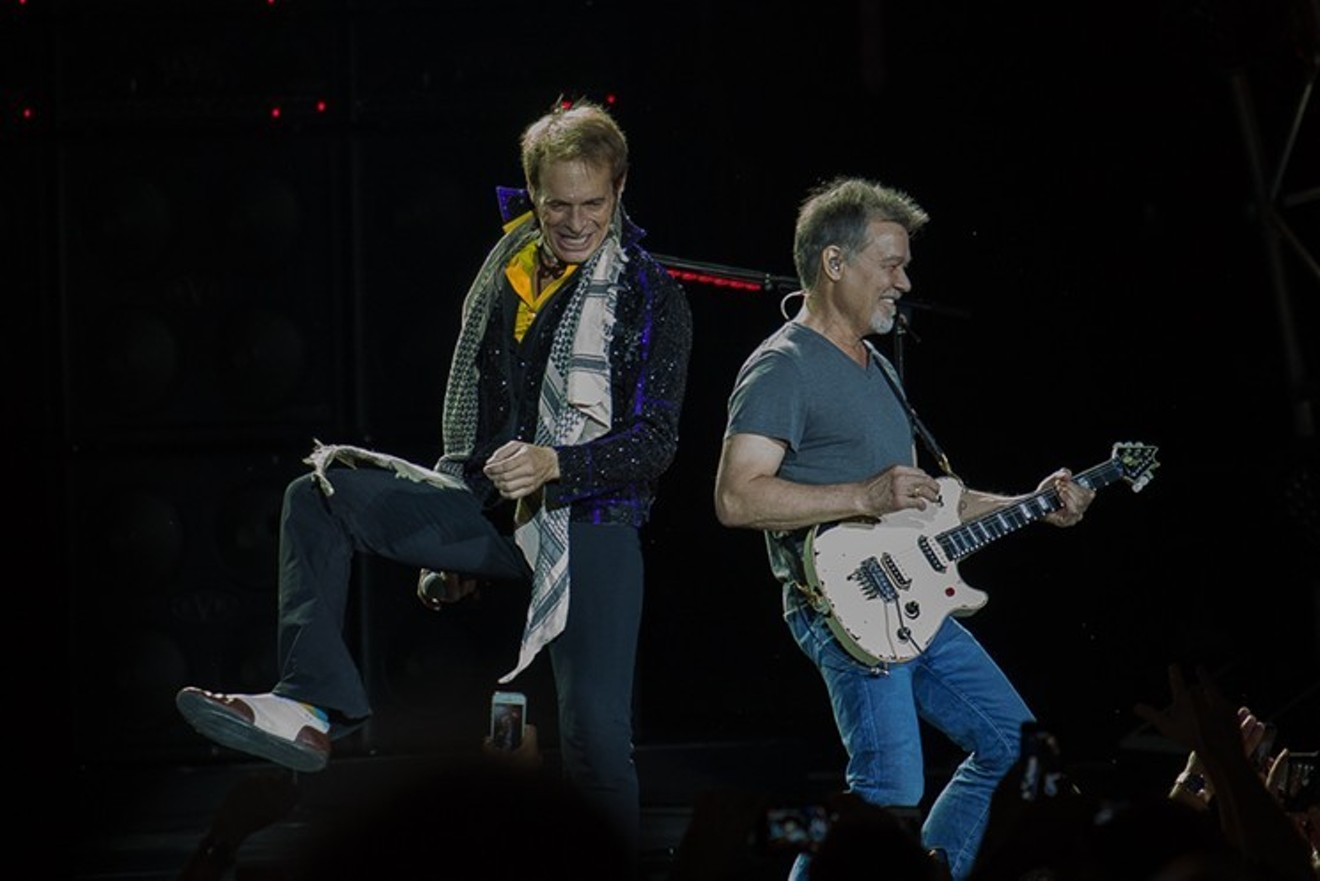 Fans around the world were shocked and saddened when they learned that Eddie Van Halen died on October 6, 2020, after years of battling cancer. It was obvious that Van Halen the band was not going to continue after the death of one of the most influential hard rock guitar players in history and the main driving force of the band.

After Edward’s death, his son Wolfgang Van Halen has released several singles and two music videos with his new band called Mammoth WVH with a planned debut album to be released on June 11; Wolfgang has also hinted that he and Eddie’s brother and bandmate Alex Van Halen might release some unheard material from the Van Halen vault in the future.

In the meantime, let’s look back and listen to some of the most intriguing songs that Van Halen covered in their early days when they performed at small clubs and backyard parties around Pasadena, California and later Los Angeles starting in 1974.
10. "Get Down Tonight" - KC and the Sunshine Band

In a provocative article published by Billboard magazine back in June of 2015, Eddie Van Halen said, “…there are four people in this band, and three of us like rock and roll. And one of us likes dance music.” Eddie was referring to lead singer David Lee Roth as the one who likes dance music and made the statement in response to a question about why Van Halen had not recorded any new music at that time. In their club days Van Halen often played popular songs at the request of bar owners and Roth was the one who suggested they play “Get Down Tonight” which was widely successful, becoming the first of KC and the Sunshine Band’s five No. 1 hits on the Billboard Hot 100 in 1975. Yeah, it's a pretty goofy song, but fun, similar to other songs Roth would later cover on his first solo EP, Crazy from the Heat in 1985.
9. “Sweet Emotion” - Aerosmith

Although it was not as big a hit as the previously mentioned “Get Down Tonight,” “Sweet Emotion” was released as a single on May 19, 1975, and peaked at No. 36 on the Billboard Hot 100, becoming Aerosmith’s breakthrough single and their first Top 40 hit. This was a song both Roth and the rest of the band liked, as in addition to being a hard rock song, it also has some funk to it; Roth certainly is a kindred spirit to Aerosmith's flamboyant and energetic lead singer Steven Tyler. Eddie has said that when Van Halen played a show with Aerosmith in 1979 Aerosmith lead guitarist Joe Perry gave him the cold shoulder and pretty much ignored him after Eddie walked up to Perry and introduced himself backstage and told Perry what a big fan of his he was. Eddie was upset about this treatment and vowed to never treat other upcoming guitar players the way Perry treated him.
8. “Tush” - ZZ Top

Van Halen were apparently huge ZZ Top fans as in addition to “Tush” they played “Chevrolet,” “Brown Sugar,” “Beer Drinkers & Hell Raisers,” “La Grange,” “Waitin' for the Bus,” Francine,” and probably more songs from “That Little Ol' Band from Texas” during their club days. “Beer Drinkers & Hell Raisers” even made it out of the clubs as Van Halen famously played it at arenas around the world on a few tours after they made it big.
7. “Man on the Silver Mountain” - Rainbow

Richie Blackmore, founding Deep Purple guitarist and controversial figure in that he couldn’t ever seem to get along with any of his bandmates, left Deep Purple and formed Rainbow with legendary metal singer Ronnie James Dio on vocals. “Man on the Silver Mountain” is perhaps their best-known song from the Dio era; it’s a bit crazy to think of David Lee Roth trying to sing a Dio song live as he has never been known for his great vocal abilities and is more of a showman. Eddie was the Deep Purple, Rainbow, and Richie Blackmore fan but unfortunately, like Joe Perry, Blackmore was not nice to Eddie, with Eddie claiming publicly that Blackmore hated him. Eddie correctly stated that Perry and Blackmore were threatened by his talents and were probably jealous as well.
6. “All the Way” - KISS

Van Halen performed a few KISS songs in their club days and it’s cool that they chose “All the Way” as one of them because it’s one of the better KISS songs that was never a hit or even released as a single; it is a track from KISS’s second album called Hotter Than Hell which was released in 1974. Of course, Gene Simmons of KISS claims to have discovered Van Halen and he did indeed produce their first demo after Simmons saw an unsigned Van Halen performing at the Starwood Club in Hollywood in 1976. What he often fells to mention is that the demo he produced didn’t impress his own manager or record company enough to sign Van Halen; Simmons was proven right about their talent of course after they signed with Warner Brothers and the whole world heard their amazing first album.
5. "Rock and Roll, Hoochie Koo" - Rick Derringer

"Rock and Roll, Hoochie Koo" is a classic rock song written by Rick Derringer that celebrates the excess of the '70s music scene, a great party song; the song was originally recorded when Derringer was in Johnny Winter’s band in 1970 and then again on Derringer’s solo album called All American Boy in 1973. The Derringer solo version of the song was his only Top 40 hit; it famously appeared in the 1993 Richard Linklater film Dazed and Confused and its soundtrack, introducing the stadium anthem to a whole new generation. It’s just a fun song and the Van Halen version is quite good with great guitar work by Eddie as usual and Roth having fun with his vocal performance.
4. "In for the Kill" - Budgie

Budgie were one of the earliest heavy metal bands that never quite made it big in America or anywhere else really; they formed in 1967 in Wales and have been cited as an influence by many other hard rock and metal bands that went on to have bigger careers than they did. Metallica were big fans of Budgie and covered two of their songs throughout their career, “Crash Course in Brain Surgery” and “Breadfan,” helping to give Budgie some exposure that they never had before. Van Halen were big fans of Budgie as well long before Metallica was formed and played “In for the Kill” in the clubs with Roth often praising the unknown band to people in the audience during his introduction to the song.
3. “The Rover” - Led Zeppelin

Eddie Van Halen was a big fan of guitarist Jimmy Page and Led Zeppelin so it’s not surprising that Van Halen played a few Zeppelin tunes in their club days; the cool thing is they didn’t play any obvious songs that every other bar band played but deeper cuts like “Trampled Under Foot” and “The Rover.” Eddie got to meet his hero Page and unlike Ritchie Blackmore and Joe Perry who treated him so disrespectfully, Page was very kind to him; years after Roth left the band and Sammy Hagar replaced him, Van Halen would often play Zeppelin’s “Rock and Roll” live and it made it on to a home video of one of their concerts which is called Van Halen: Live Without a Net which came out in 1986.
2. “Tomorrow's Dream” - Black Sabbath

Black Sabbath was another favorite band of Eddie, and he called the opening guitar riff by Tony Iommi on their song “Into the Void” one of his favorites of all time; Eddie and Iommi became lifelong friends and admirers of each other after Van Halen toured with Black Sabbath in 1978 for eight months. Once again, Van Halen covered a deep Black Sabbath cut with “Tomorrow’s Dream” instead of covering something obvious like “War Pigs” or “Paranoid.”
1.”Make It Last” - Montrose

Sammy Hagar replaced David Lee Roth as the lead singer of Van Halen in 1985; Roth eventually got his job back in 2007 but Hagar and Roth have been talking shit about each other in the media ever since the beginning of Hagar’s tenure and only seem to have mellowed out recently since Eddie’s death. So, it’s kind of fascinating to hear this old cover of "Make It Last” from Montrose since Hagar was their lead singer before his solo career. In fact, the debut self-titled album Montrose released in 1973 marks the recording debut of Sammy Hagar who also wrote “Make It Last” which was the last song on the album.

Further adding to the irony is that Ted Templeman produced the first Montrose album and later wanted to replace Roth with Hagar when he produced Van Halen’s debut self-titled album in 1978. Thankfully that never happened because I much prefer the Roth-fronted Van Halen over the Sammy era. It is funny that Roth mocked Hagar when Hagar joined Van Halen and had to sing all the lyrics to songs he had written, but he never, ever, has mentioned this old Hagar written song he sang in the club days.
KEEP THE HOUSTON PRESS FREE... Since we started the Houston Press, it has been defined as the free, independent voice of Houston, and we'd like to keep it that way. With local media under siege, it's more important than ever for us to rally support behind funding our local journalism. You can help by participating in our "I Support" program, allowing us to keep offering readers access to our incisive coverage of local news, food and culture with no paywalls.
Make a one-time donation today for as little as $1.
David Rozycki
Contact: David Rozycki