Alexandria Sadé on the Particular Brilliance of "A Garden of Peace" 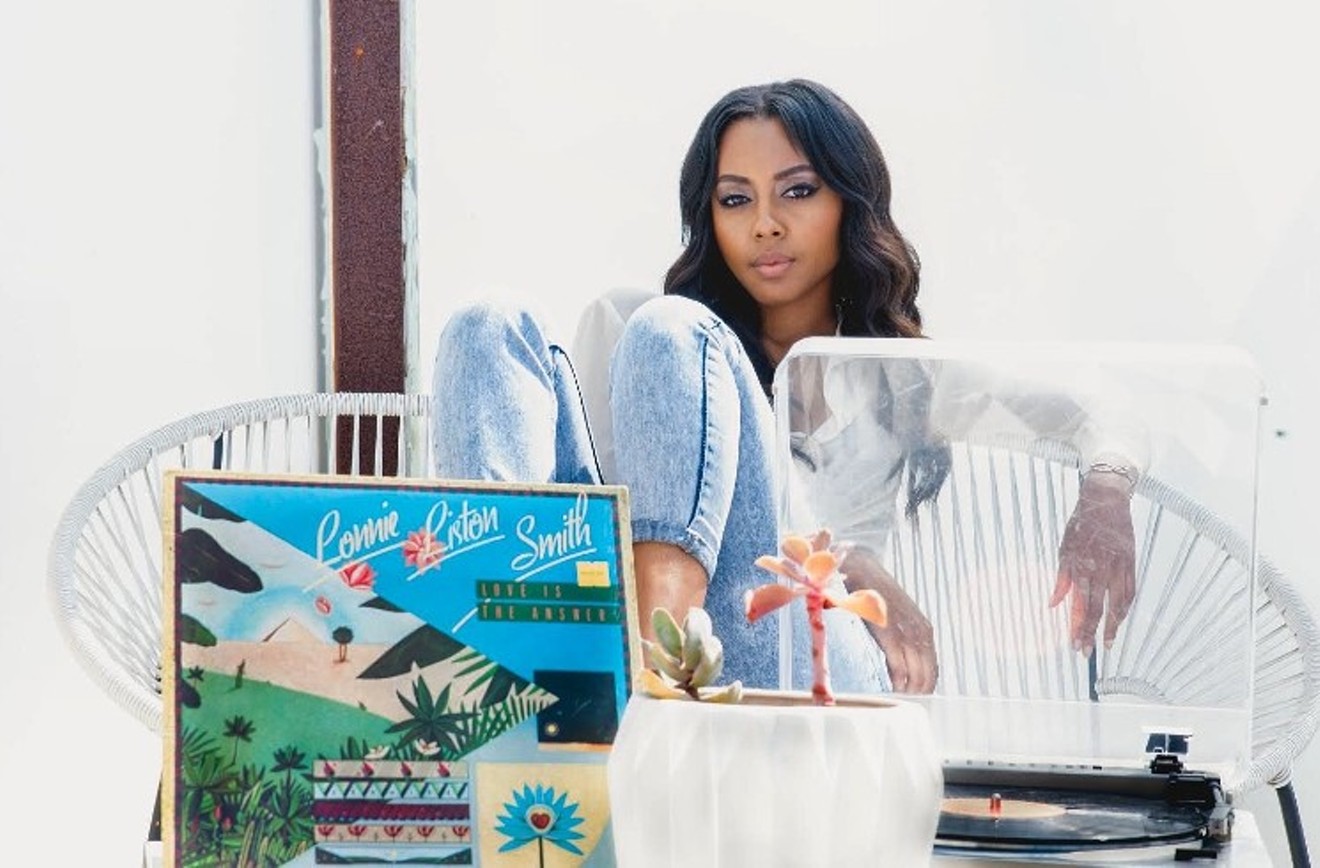 Alexandria Sadé isn’t your typical record collector. For one, there are currently only two albums in her Washington, D.C. home. Also, she’s less interested in her own vinyl collection these days than those amassed by others in the record collecting community. As founder of and curator for the budding Instagram page Black Girls Love Vinyl, she’s focused on providing a platform for and telling the stories of a very specific group of collectors.

Sadé does, of course, have her own stockpile of vinyl albums, in storage in St. Louis, her hometown. Within that collection, there’s one album with one song this rising music influencer finds particularly brilliant. The album is jazz pianist Lonnie Liston Smith’s Dreams of Tomorrow. The song is “A Garden of Peace,” the closing track to the 1983 record. She even recalls the first time she heard the song. She was in college, sitting on the floor of her apartment, when it played. She played it again. And again. She played it loud, through her speakers. She played it and danced to it. She has never stopped playing it since then. There’s a good reason why, she explained.

“The first record I actually bought by him was Love is the Answer. I started exploring his music and I came across that song and it was on replay the whole time. I was just like, ‘Wow, this song is amazing.’ I think, for me, I really saw my life, I could paint the picture of what I wanted my life to be in that song. I see the possibilities, I see my purpose in that song.”

At the time, Sadé was still determining her purpose, like most collegians. She was pursuing a biology degree  but after school she headed west to live in Los Angeles and chase music dreams. She knows the first song she ever recalls hearing, Snoop Dogg’s “Gin and Juice.” Her dad introduced her to music, giving her cassette tapes of his favorites. She tried playing music, too. In elementary school she “played the flute, but I wasn’t good at it, so I stopped playing. I was just like, ‘I can’t do this.’ I stopped going to practice and everything.”

Her mom put her in piano lessons “and, actually, the teacher quit on me. I was just remembering the music notes, it was to the point I wasn’t learning the keys, I was just memorizing.” So, she turned back to listening intently and collecting. The legendary St. Louis record shop Vintage Vinyl became a favorite haunt of hers in high school. She’d select hip hop and electronic records to suit her tastes. In college, a friend gave her a record player and she began growing her collection and her interest in music production at that time. It’s what led her to L.A., to take lessons from the renowned hip hop DJs and producers, the Beat Junkies.

While in Los Angeles, Sadé started Glow of Sunrise, her own media company, in 2017. She knew she wanted to focus on records and vinyl. Her first project was a video series dubbed “Vibrant About My Vinyl,” which she described as “an MTV-styled tour” of collectors’ record collections and the spaces those records inhabited. She also began modeling her records. The IG-driven trend allows record collectors to present selections from their collections in novel and eye-catching photos.

“When I was modeling my records, that’s when I kind of started noticing I didn’t see anybody that looked like me and what I was doing,” she said. “People were modeling their records in their homes, in front of their vinyl collections, but me, I was outside, in different parts of L.A.

“For me, it was all about the feeling of the record and how it inspired me in the scene that I was in,” she said.

“I wanted to do something that highlights women that look like me because I am a woman of color,” she said. She thought about it and knew only a few Black women who were vinyl collectors, people she knew from college or from deejaying. So, she created the Black Girls Love Vinyl page on Instagram. Its first post was in January 2018 and the Glow of Sunrise site features in-depth Q&A sessions with collectors featured on the page.

“I feel like that was supposed to be my niche,” she said. “I kind of got away from Glow of Sunrise and the big aspect of it and started just focusing on Black Girls Love Vinyl. This year and last year, I mainly chose to focus on it and highlight women like me.”

She started accumulating interest by networking, reaching out to people she knew at first and letting the endeavor find a life of its own.

“It really was me reaching out to people as much as I could as they were following the page,” she said. “Then after that, it just seemed like people were coming to me. I actually had a girl, her Instagram page is Records with Raniyah, and she sends me people all the time, so now I’m not really searching, they’re kind of coming to me.”

But, not many from Houston yet, she said. She’s on the hunt to tout the efforts of Houston’s Black women who love vinyl.

“I actually would like to find them. I don’t think anyone from Houston has reached out to me. I’ve been looking through followers, too, but I don’t see them. I’m like, ‘Where are they?’ because everybody that I’ve been getting hit up from are from the East Coast mainly, and the West Coast. I would actually love to know that there are some. I’m from St. Louis but I actually love the South, too, so I need you guys.”

She knows the community is rich with collectors like her and the reason for spotlighting this particular segment of the collecting community is to showcase its diverse music tastes.

“When I lived in L.A. I would see a lot of females deejaying, a ton, and they were Black. I think there is definitely a demographic,” she said. “There are women that have been in the game doing what they do as a career, but also just everyday people that collect records and I’ve noticed, with me creating the page, it’s letting more Black women realize they can share their music tastes.”

“When I was in college, I would kind of share my records, but I was kind of nervous doing that. I feel like having this page has allowed Black women to realize it’s okay to show and share your music tastes. We know music as well. You don’t have to be a musician or work in the music industry, this may be something you just do for fun or as an outlet, or a journey for you, because that’s what it was for me. But I wanted to show that aspect about myself and I think that’s what I’m starting to see with other females that are Black as well, they just want to showcase, ‘Hey, I like music.’”

Sadé does like music, a lot of it, but a recent move to Washington, D.C. means she has very little of it in her new place.

“My record collection right now is back home,” she said, noting that she can’t put a number to how many albums she has, thanks to all the people who’ve simply gifted her records once they learned she collected them. “It’s on a shelf, like a six-column shelf and it’s sideways, and I have them all stacked in there. How many? I really can’t tell you. But, it’s pretty full.”

Some of those records are by Lonnie Liston Smith, the jazz fusion artist whose work in the 1970s and ‘80s ushered in “acid jazz.” “A Garden of Peace” isn’t some obscure cut from Dreams of Tomorrow’s B-side. Just a couple of years ago, a Stereogum article noted its frequent use in sampling. It’s a go-to because it’s versatile, able to fit whichever mood it's required to, which is the particular brilliance of it, according to Sadé.

“I like to listen to a lot of instrumental music,” she said. “I feel like I’m always searching for my thoughts when I listen to music. Music, for me, is a journey and that song literally is for every moment of life. I think when times are hard for me, I can go to that song and I feel stronger. I can go into it sad, but I come out stronger. Or, say I’m just not that confident in something, after the song – even when it starts, the beginning of that song, the piano, the keys that Lonnie plays in that song – it just really empowers me. I feel like I can conquer everything.

“I chose that song because it really channels how I live with music. I feel like I can live in that song,” she said. “It’s a happy song, it’s a sad song, it really puts you through a journey, it reminds you of your past, it gives you hope for the future.”
KEEP THE HOUSTON PRESS FREE... Since we started the Houston Press, it has been defined as the free, independent voice of Houston, and we'd like to keep it that way. With local media under siege, it's more important than ever for us to rally support behind funding our local journalism. You can help by participating in our "I Support" program, allowing us to keep offering readers access to our incisive coverage of local news, food and culture with no paywalls.
Make a one-time donation today for as little as $1.