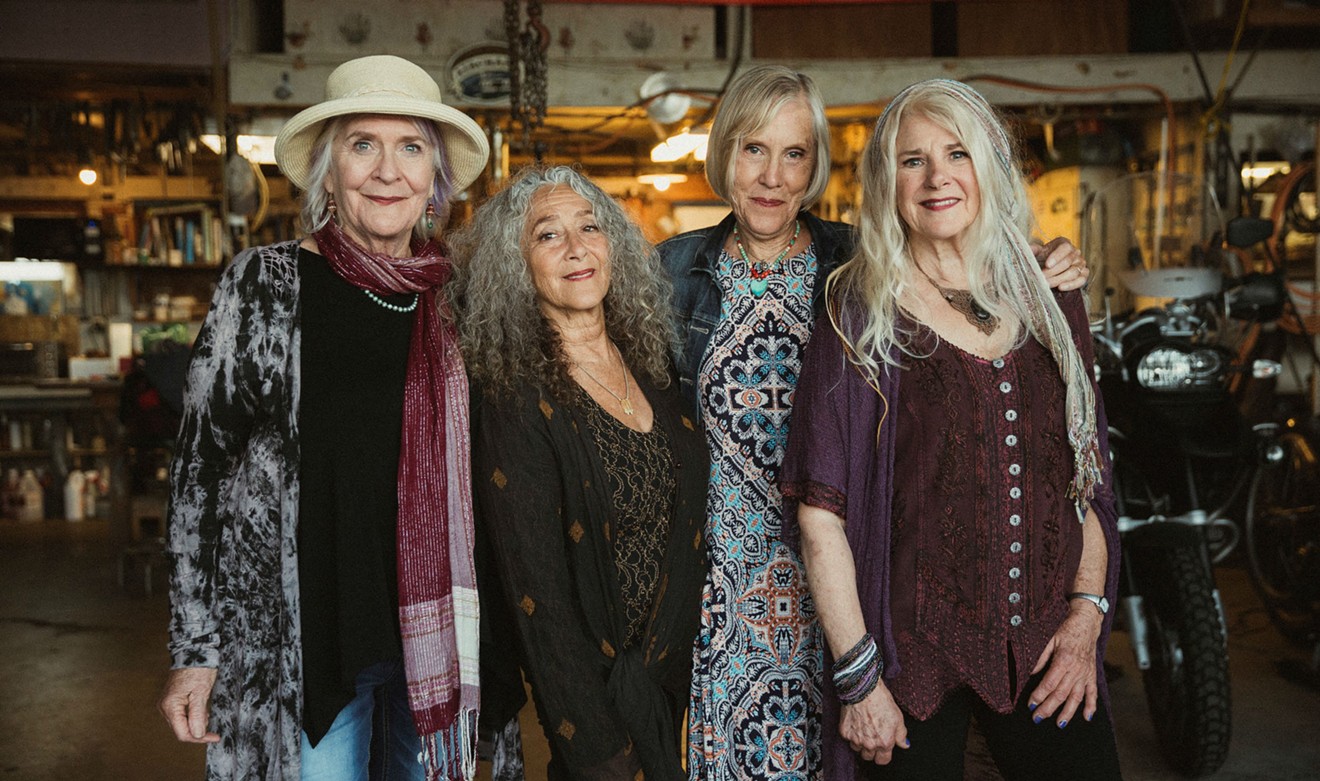 Most people will cite the Bangles or Go-Go’s. Or maybe the Runaways. Music nerds might even pull out Fanny or the Shaggs. But pre-dating them all was the five-member Ace of Cups, who formed in 1967 right in the heart of San Francisco’s Haight Ashbury district along with the Grateful Dead, Jefferson Airplane, Quicksilver Messenger Service, and Big Brother and the Holding Company.

They had chops, played everywhere around the area, and were a popular live draw. They opened for the Band on their very first show under that name and had a big fan in Jimi Hendrix, who name checked them in the
English music paper Melody Maker.

Ace of Cups in the late '60s: Mary Ellen Simpson, Denise Kaufman, Diane Vitalech, Mary Gannon, and Marla Hunt.
Photo by Lisa Law/Courtesy of Shorefire Media
The reason they’re not better known, though, is because Ace of Cups never got to release an album, passed over by every record company that descended upon the Bay Area at the time.

Incredibly, more than 50 years later, most of the original lineup has reunited to record their “debut” Ace of Cups (High Moon Records). Featuring their ‘60s material (some of it rewritten) and newer songs, the sprawling double CD has 26 tunes – and there’s another 10 in the bank.

As to why they never got a record deal, it’s something that singer/guitarist Denise Kaufman puts down to simple sexism. Well, mostly.

“It’s not 100 percent of the reason, but I bet it was 80 percent!” she says today. “There were no other all-women bands who were a commercial success from the record company’s point of view. We didn’t look like those girl groups like the Shangri-Las. And we weren’t a bunch of appealing young guys that girls could scream about.”

Ace of Cups in the '60s, clockwise from left: Vitalich, Gannon, Simpson, Hunt, and Kaufman.
Photo by Casey Sonnabend/Courtesy of Shorefire Media
Kaufman adds that while women like Janis Joplin (Big Brother), Grace Slick (Jefferson Airplane), and Tracy Nelson (Mother Earth) were certainly prominent in their bands, they were mostly fronting and singing — not playing. “I have never heard from any of those record company executives who came to check us out or check out the San Francisco scene about why we weren’t signed, but I’d be very curious to know why,” Kaufman says.

The original Ace of Cups were Mary Ellen Simpson and Denise Kaufman (guitars), Mary Gannon (bass), Diane Vitalich (drums), and Marla Hunt (organ/piano), with all but Vitalich taking turns at lead vocals. After playing together for a few years, members started leaving as they began to have children – something their male counterparts did not have to worry about. A different lineup finally called it quits in 1972.


Simpson, Kaufman, Gannon (now Alfiler), and Vitalich put down the material for Ace of Cups after a year and a half of sporadic rehearsals (Kaufman says that Hunt did not participate and works on artistic projects with her husband). Prior to this record, the only way to hear Ace of Cups music from the ‘60s was 2003’s If It’s Bad for You Buy It, a compilation of rehearsals, demos, TV appearances, and live material.

The new record’s songs follow across what Kaufman refers to as “trans genre,” skipping across pop, rock, blues, and even country sounds. Above all are the vocal harmonies of the four women, largely untouched by the passing of decades.

“We worked really hard on the harmonies. That is pretty much our passion. I love to write counter melodies, and I just really love hearing voices together,” Kaufman offers. They also called upon some of their friends from the era like Grateful Dead’s Bob Weir, bluesman Taj Mahal, singer/songwriter Buffy Sainte-Marie, and actor/musician Peter Coyote to make guest appearances. And Kaufman notes that Ace of Cups backup vocals were featured on ‘60s records by the Jefferson Airplane, Quicksilver Messenger Service, and Electric Flag.


When that last band was forming under the guidance of guitarist Mike Bloomfield and drummer Buddy Miles, they even used the Ace of Cups’ communal Marin County home to store their equipment and rehearse. Ace of Cups also got to know Jimi Hendrix, and were invited to open a free show the guitar genius was headlining at San Francisco’s Golden Gate Park one week after his star-making performance at the Monterey Pop Festival.

“He was so soft spoken and kind. He stood with Buddy Miles in front of us while we were playing and took pictures,” Kaufman recalls. It was hardly the first – or the last – free show at the Ace of Cups would play. As Kaufman put it in a recent short PBS documentary on the band, “The music supported the community, and the community supported the music.”

“That was the core of what was going on in the Bay Area at the time. There were a lot of free shows and benefits, and our manager said we played as many of those as paying gigs!” Kaufman laughs.

“There was as definite sense that we were part of a larger community. The Diggers were feeding people in the park. You had the Haight Ashbury Free Clinic for treating people. There was free legal aid. And all kinds of worthwhile causes and organizations. Sometimes it was even just helping someone raise money for art projects or someone to pay the rent. We even played at our local tiny post office for National Post Office Day!”

The Ace of Cups play "trans genre" music that cover pop, rock, country, and blues, along with some pristine vocal harmonies.
Photo by Rachel Wright/Courtesy of Shorefire Media
As the current lineup of Ace of Cups prepares for the early November release of the record with a short string of interviews, gigs, and record store signings, she says that they are talking about doing more live shows – though it’s difficult with all four members living in different locations.

And while many ideals of 1967’s Summer of Love haven’t exactly translated into 2018’s reality – and the entire term itself has become something of an all-catch fantasy propagated by documentaries and songs – Kaufman still holds steadfast to her hippie beliefs. Both then and now.

At one point, she thought that economic culture in this country could become one of bartering. She recalls growing vegetables in the band’s garden, then taking them to the local health food store to trade in for cheese.

“I remember thinking “this could totally work!’ The world didn’t have to be dark and threatening and we could nourish connections with each other,” she sums up. And music was a crucial part of making that happen.

“Getting together with people was a really important value at the time. It was about the experience of sharing things with people and connecting with them. You have to remember the ‘50s! We weren’t following the script, and we knew the world could be better.”
KEEP THE HOUSTON PRESS FREE... Since we started the Houston Press, it has been defined as the free, independent voice of Houston, and we'd like to keep it that way. With local media under siege, it's more important than ever for us to rally support behind funding our local journalism. You can help by participating in our "I Support" program, allowing us to keep offering readers access to our incisive coverage of local news, food and culture with no paywalls.
Make a one-time donation today for as little as $1.