The (Steven) Marshall Plan to Make it in Music 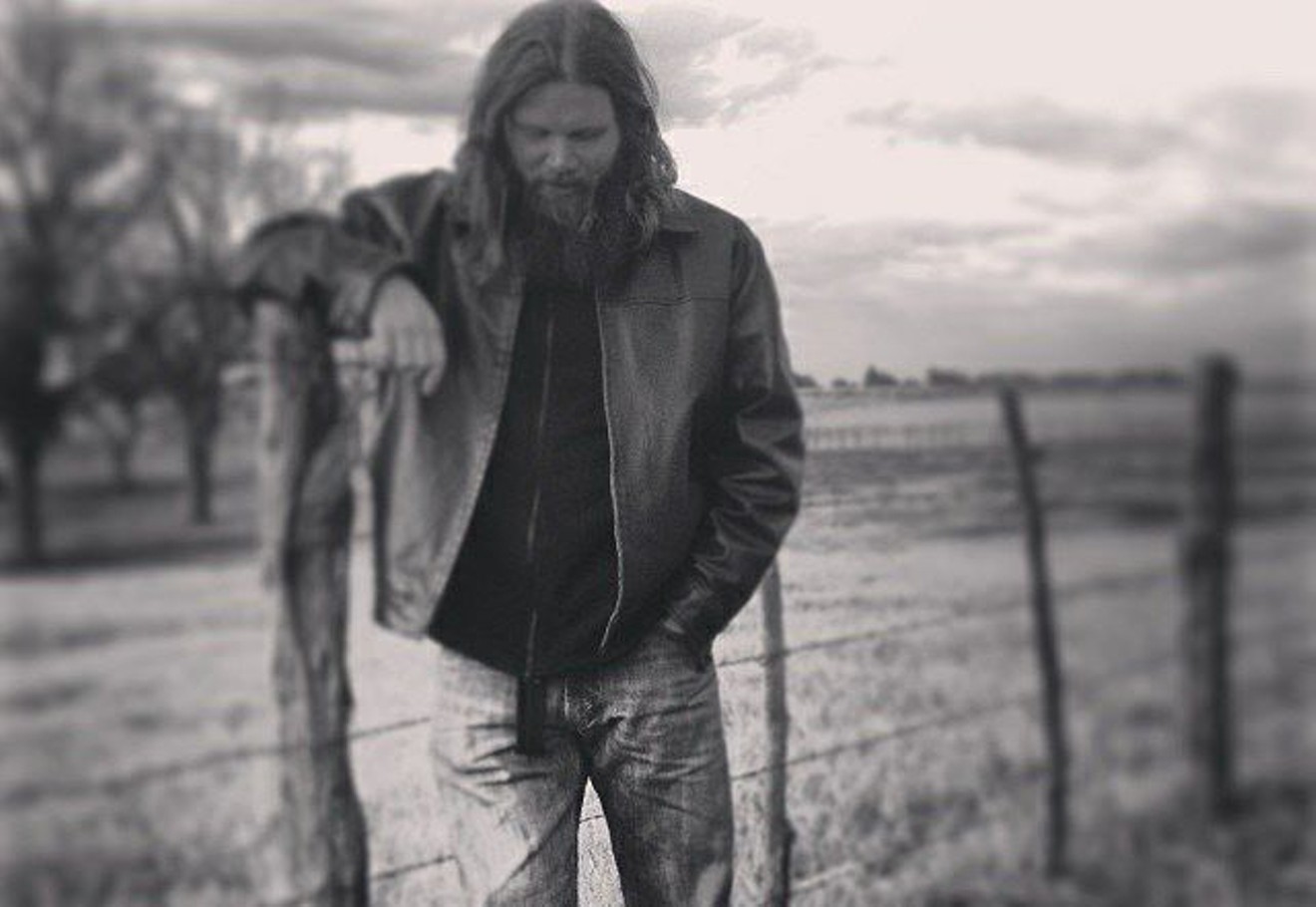 Photo courtesy of Steven Marshall
It was a Saturday evening at the Ranch Bar + Kitchen in the north Houston suburb of Cypress. Steven Marshall sat alone on the small stage, dressed casually in jeans and a T-shirt, just him and his acoustic guitar.

The crowd was sparse at the time—it was still fairly early in the evening. They alternated their attention between the beers in front of them and the longhaired, heavily-bearded man on stage playing covers of George Strait, Merle Haggard, Hank Williams Jr., Johnny Cash, and John Conlee. That’s when Marshall spotted one guy over at the Skee Ball machine sporting an AC/DC T-shirt.

Steven Marshall onstage at the Ranch Bar + Kitchen in Cypress, Texas.
Photo by Bob Ruggiero
“Hey, you like AC/DC?” Marshall asked. When the man replied in the affirmative, Marshall leaned into the mike and offered enthusiastically “then this one’s for you!” He then launched into a near-perfect rendition of that hard rock band’s signature song “You Shook Me All Night Long,” but recast as an Outlaw Country tune. And it worked beautifully, given the applause that followed. And Marshall smiled. He then offered up more non-country material like "What I Got" by Sublime and Sinead O'Connor's (via Prince) "Nothing Compares 2 U."

He even serenaded the guy in the AC/DC shirt with "Happy Birthday" since it was his big day.

“I never have a set list,” he says with a deep drawl over the phone a few days later. “I’m always reading the crowd, and if they’re responding to something, I’ll do my next song that correlates and just try to build the momentum. Every show should be like a little roller coaster ride.”

Marshall has been on that roller coaster for a number of years now, gigging in and around Cypress, Houston, Stafford, Conroe, and his current home of Brenham. And he’s not picky about the venue either, having graced the stages (and sometimes, floors) of sports bars, saloons, festivals, benefits, clubs, and private parties.

Marshall has also opened for bigger names like Brandon Rhyder, Josh Ward, Cody Canada, and even the rock band Collective Soul. But for his bread and butter, he’s playing mostly country and classic rock covers, though he is able to slip in one of his original tunes every so often. Some of his favorites he's written include "I Love Pain (Hurt Me If You Can)," "Don't Mean I'm Lonely," "Beer Song," and "Right Where You Left Me."

“I tried to keep the mix of positive energy out there, and sometimes, I have to be a human jukebox,” he continues. “And then I can sneak in one of my originals—I kind of bait people into listening to them.” Marshall says he’s got about 17 self-penned tunes ready to record, just as soon as he can land a record deal or some studio time. Right now though, he’s just happy to be able to make a living playing music, and always on the lookout for the next stage.

Steven Marshall was raised and spent his teen years in Brenham. He began playing drums and then guitar at the age of 14. It was the same age he first met his biological father, a “well-known in the area” Texas musician who he declines to name due to the current state of their relationship. The teen was soon gracing stages with his father’s band, and learning chops when his father and his musician friends would gather to jam at the house.

“I remember I would play gigs and my mother would drop me off at the club, then pick me up after the show, and I’d be in school the next morning,” the now 39-year-old recalls.


His interest in music was initially stoked by two sources: his father’s well-played VHS copy of Stevie Ray Vaughan Live at the El Mocambo and Sunday night reruns of “The Dukes of Hazzard” on The Nashville Network.

“I always wanted to be the guy on ‘The Dukes of Hazzard’ who talked between the breaks. And then I found out that it was the same guy who sang the [theme] song and it was Waylon Jennings,” Marshall says. “And when I saw that Stevie Ray Vaughan tape, that’s when I knew I wanted to do that. It was a way to bond with my father.”

It was also around this time that he gravitated toward Outlaw Country artists, none more so than Johnny Paycheck and David Allen Coe. “It blew me away when I heard [Coe's] records. I thought ‘Wow, you can talk shit in songs?’” he laughs. “And they helped form my bad attitude!”

After his high school years in Brenham, Marshall bounced around a bit, living in College Station and then Austin. That’s where he met country artist Doug Moreland, joining his band as a drummer and touring around Texas, Oklahoma, and Colorado.

He got “thrown into the deep end” one night at a New Year’s Eve Party in 2008 when the scheduled entertainment didn’t show up, so Marshall took the stage to entertain revelers as the hours slipped into 2009. “I didn’t think I’d done well. But people seemed to like it, and it definitely lit a fire in me. And I’ve been going ever since,” he says.

A relationship with a girlfriend (which Marshall notes he’s “since been absolved of”) brought him to the Cypress areas for several years. He honed his singing and guitar playing at places like the Cypress Saloon and Texas Tavern, the latter during their Wednesday Open Mike Nights. He also took jobs as he could – beer truck driver, cable guy – all the while working on honing his songbook of covers and originals.

Marshall says that his own musical tastes are a bit more varied than what he’s playing onstage, noting a love for seeing “high energy bands” in concert like Slipknot, Tool, and Korn.

Photo courtesy of Steven Marshall
Over the years, Marshall has played in a lot of what he calls “dive bars,” but has also had some interesting experiences. Like being the entertainment for about 80 officers at a party thrown by the Texas DPS Officers Association. Or a private party where the host kept slipping him $200 for each extra hour he would stay past his originally slotted time.

“I had to stop after six hours, because I didn’t have any more songs to play! They wanted me to keep going, but I physically couldn’t do it!” he laughs. “I walked away with a lot of money in my pocket that night. And I learned how long I could go without repeating a song!” And even if Marshall doesn’t know a song shouted out as a request, he’ll often try to fake it, getting the audience to provide chorus vocals to fill in the gaps.

Still, every day for Steven Marshall is a hustle. He’s been grateful for gigs and supporters who might throw him $40 for gas money to help out. He certainly could have used it for a recent gig in Weatherford, to which he had to drive six hours, play for three, then drive six more back. But he’s overwhelmingly positive about his chances to get to that next level in his career, especially about that record he wants to make.

“I knew from an early age that I was never a 9 to 5 type. I’m very thankful I can do what I do and cover my bills right now. I’m on a path, and doors are opening themselves,” he says. Though – at least for now – that path will remain solo. “You don’t have to split money when you’re one person, and you don’t have to pay anybody! I load my own equipment.”

Back at the Ranch Bar + Kitchen, Marshall unfurls more cover songs as the bar begins to fill up along with his tip jar at the foot of the stage. A similar scene is playing out on scores of stages in dark places all over Houston, though, with a lot of aspiring performers. When asked what he thinks sets him apart from other musicians all chasing the same dream, Steven Marshall thinks for a minute. Then digs deep inside.

“When I cover a song, I’m gonna make you feel it,” he sums up. “I make it my own with my own spin. I can relay my feelings and make a song my own. I’m good at songs, but I’m bad at interviews!

For more, visit StevenMarshallMusic.com
KEEP THE HOUSTON PRESS FREE... Since we started the Houston Press, it has been defined as the free, independent voice of Houston, and we'd like to keep it that way. With local media under siege, it's more important than ever for us to rally support behind funding our local journalism. You can help by participating in our "I Support" program, allowing us to keep offering readers access to our incisive coverage of local news, food and culture with no paywalls.
Make a one-time donation today for as little as $1.