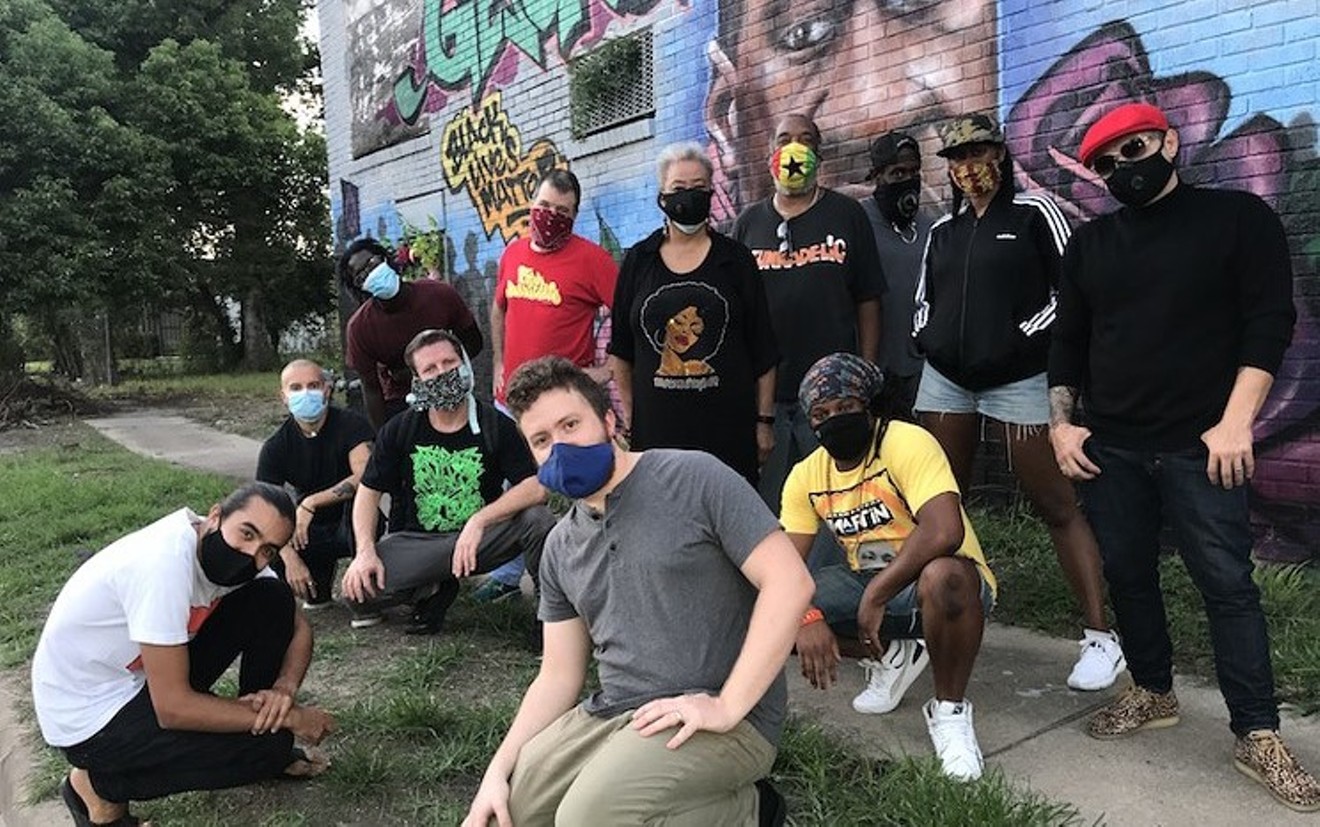 “We just really took our time,” says founding member Nick Cooper. “This is a five year project for us.” Cooper sent out an invitation to his many musical contacts across the globe to collaborate on the project with the overarching theme of ending white supremacy.

The subject really struck a nerve and Cooper received a massive response leading to this album and an additional volume of tracks. Local vocalists along with artists all the way from Australia and the Gaza strip contributed to the project.

The Free Radicals have been part of Houston’s musical landscape since the mid '90s and have come to be known not only for their ability to break down a funky beat while mixing almost every genre of music on the planet, but also for their social consciousness and activism in and around Houston.

“Artists and activists, they're not predicting the future when they are talking about something that they see going on, they're just paying attention,” says Cooper.

He admits that initially some musicians and contributors expressed a slight unease with the confrontational tone of the album title, but as time and history progressed, or regressed in some cases, they jumped on board.

“The consciousness of the danger of white supremacy became more widespread to the people who aren't necessarily all that political,” says Cooper of the shift.

White Power Outage starts off with a bang with the mellow, funk based yet lyrically bold tune “America Is A Lie” featuring local poet and activist Obidike Kamau. Kamau’s words, though spoken calmly, hit like a punch to the gut as he describes the hypocrisy in this country's origins and history of racism.


“It really kind of woke something up in me doing this piece,” says Kamau. “I wanted to do it in a real matter of fact tone. This is not an argument. I'm not really trying to convince you, it is what it is and that's how I wanted it to come across.”

“I know that there are some people that are going to be automatically offended,” says Kamau. “I let a partner of mine, a white guy, listen to it and he just shook his head and said, ‘The only thing I wish is that it wasn't true,’ so he wasn't offended that I said it, perhaps he was offended that it needed to be said.”

White Power Outage Volume 1 glides from track to track seamlessly taking listeners all over the world with its musical influences and deep subject matter. The album addresses head on racism, immigrant rights, student debt, income gaps, women’s rights and more — all issues that have been bubbling to the surface not only here in the United States, but all over the globe.

The band’s jazz roots are strong and notable in the sonic backbone of each track but the album itself is heavy in hip-hop. Though the songs themselves are serious in nature, their overall sound is danceable and playful leaving the listener not only feeling more aware and empowered but also hopeful for a better future.

A perfect example of this balance is “Estamos En La Lucha” featuring Houston-based artists Karina Nistal. The horn heavy, Spanish language song describes the struggle and injustices faced by immigrants and serves as a call to stand up for human rights.

Nistal delivers her lyrics in a firm and clear rap and her message is only made stronger by the voices of the children from Peace Camp Houston who contributed chants of “Listen racist, we are in the struggle.”


“It helped guide the message of the song when I wrote it,” says Nistal of the children’s chants on the song. The video for “Estamos En La Lucha”, premiering here, features footage from protests in the city, their recording session at Peace Camp Houston and Nistal out on the road and performing on stage with the band in pre-COVID days.

“I feel like we are called to stand up and voice ourselves during this time, and really always, but this time is just so crucial to stand up for the things that you really believe in and that you really feel strongly about,” says Nistal adding, “It would almost be an injustice not to.”


“I feel like we are called to stand up and voice ourselves during this time."


The Free Radicals have always been open to collaborations and featured countless artists on their albums but with White Power Outage, they focused on collaborating with vocalists in particular.

“We wanted everybody to take it in their own direction,” says Cooper of the many collaborations on the album. “When we are making music, we are blending stuff just like a chef is going to try to incorporate different things. I’ve worked with so many of these folks in different contexts and to bring them together on an album is always such a pleasure.”

Sheppard and Choice are both seasoned vibraphonists. Sheppard, who is 92, played with Benny Goodman and Duke Ellington to name a few, and he continues to play frequently around town. Choice was a member of the Sun Ra Arkestra.

Though both men are a big part of Houston’s jazz legacy, they only met in recent years while playing a gig with Cooper. He recalls the moment where the two played alongside each other and chatted at that initial gig and describes how impressive it was to see them together. That day influenced this album as their twinkling vibraphones can be heard sprinkled throughout adding a light touch to the heavy subjects.

White Power Outage was initially planned to be released in March with many supporting SXSW gigs but due to COVID-19, all plans got pushed aside and the band has been focusing on making and releasing videos and digital content.

Though the project was delayed, it is almost better timing to release this work now. Hopefully this album pushes those who were undecided to get up and vote at a time when so many issues are at stake.  White Power Outage is a reminder that people are connected at a time when it can feel that we are all divided.

“You never know which current is going to kick stuff up,” says Cooper of the recent shifts in society. “You just gotta know that that's your chance to get a message out for a little while because that window is going to close again.”
KEEP THE HOUSTON PRESS FREE... Since we started the Houston Press, it has been defined as the free, independent voice of Houston, and we'd like to keep it that way. With local media under siege, it's more important than ever for us to rally support behind funding our local journalism. You can help by participating in our "I Support" program, allowing us to keep offering readers access to our incisive coverage of local news, food and culture with no paywalls.
Make a one-time donation today for as little as $1.