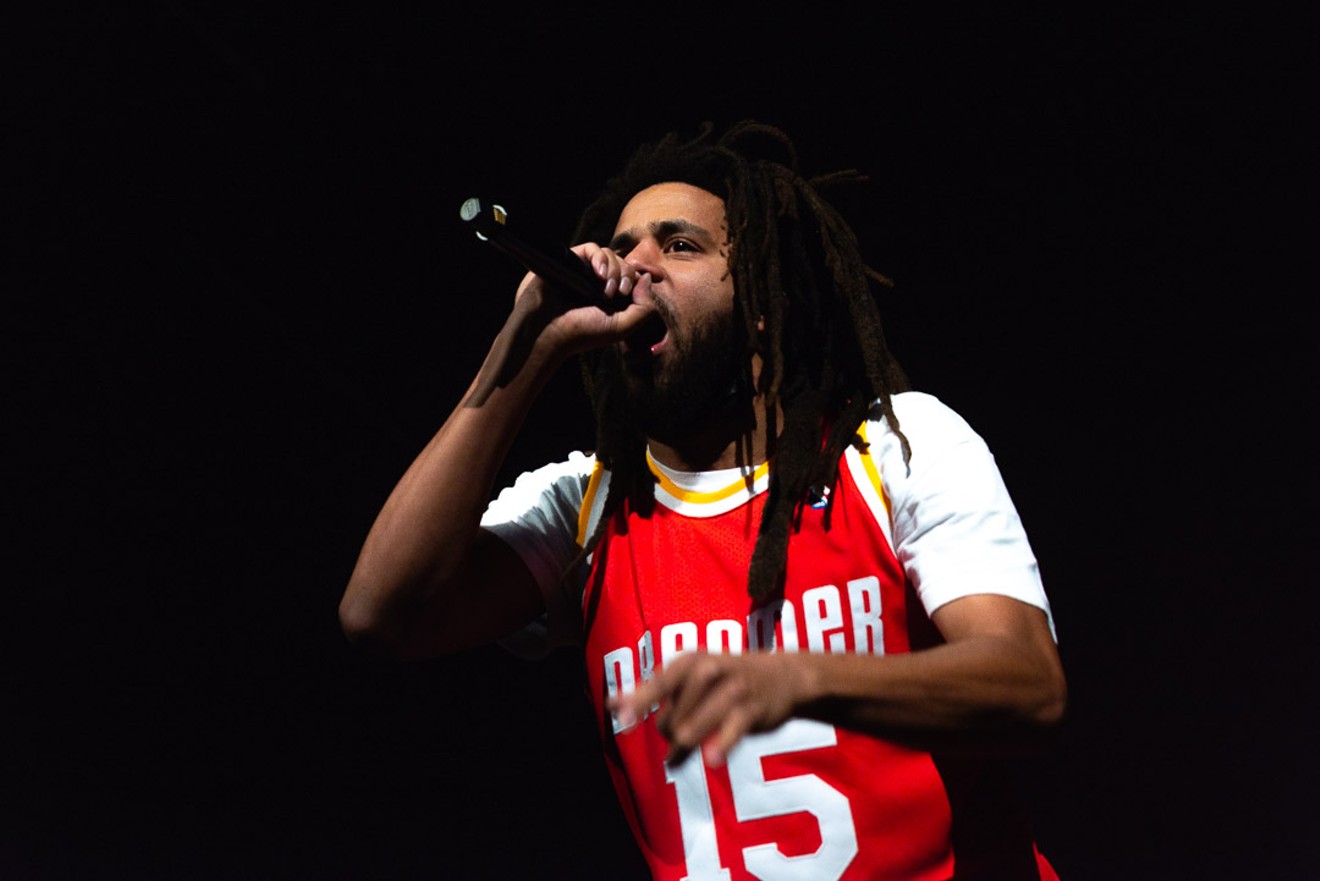 J. Cole performs at Toyota Center. Photo by Jennifer Lake
Sunday was game day for the City of Houston. While the Astros were away in Chicago defending their series lead against the White Sox, and NRG Stadium was host to the New England Patriots, Grammy Award winning artist J. Cole made sure the city had its fill of basketball at the Toyota Center with his stop of The Offseason Tour.

In support of his sixth, and sixth consecutive No. 1 studio album, The Off-Season, J. Cole stopped by the house of the Houston Rockets to transform the arena into his own personal basketball court. As the championship Chicago Bulls theme echoed throughout the stadium, Cole was shown being escorted through the underground tunnels of the arena. The artist’s awards and Billboard numbers flashed on the screen displays as “player stats” as he made his way to the stage.

Cole has always had a deep connection with basketball, playing for his schools' teams at an early age but continuing it into his music career as well. Beginning with his first mixtape, The Come Up, Cole continued the basketball theme with his next releases The Warm Up, Friday Night Lights, and his first studio album, Cole World: The Sideline Story. Cole has also taken part in various official, and unofficial, celebrity basketball games as well as signed a three-game contract with the African Basketball League team, the Rwanda Patriots on May 10, 2021, just four days before the release of his latest album. 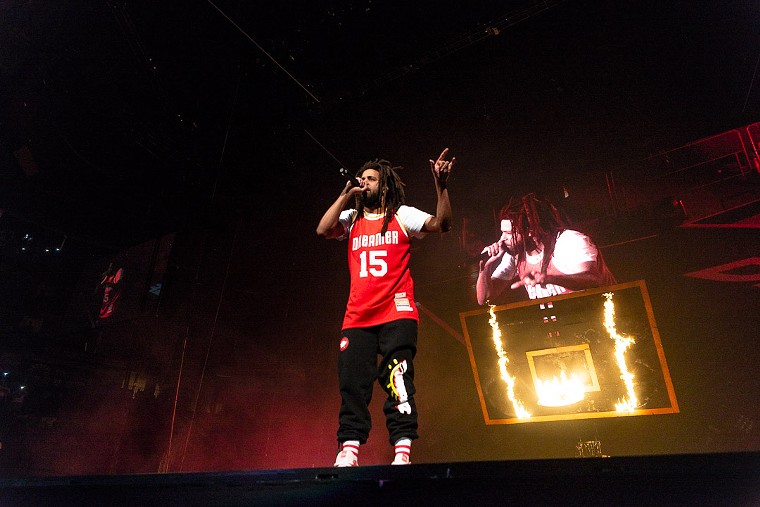 J. Cole at Toyota Center, sporting a "Dreamer" jersey.
Photo by Jennifer Lake
Sporting a red and yellow rockets themed jersey with the word "DREAMER" across the front, Cole powered through a lengthy setlist of nearly 30 tracks. Boasting a catalog of six studio albums, three mixtapes, and a handful of EP’s and collaboration albums, Cole used the night to give the audience a crash course in his discography. While going through his collection of songs that range from deep emotional tracks to upbeat love tunes, the artist took time to explain himself and vision for the tour and choice of songs. Explaining that he appreciates the crowd's reception of the popular songs but he still wants to perform his complex rap songs, not only for the audience but for himself.

“When I play that song ("Workout") it always amazes me. Some people know every bar, every lyric, word for word, and the energy you all give back is amazing. I wish every artist can get that one day, that feeling, but at the same time remember to always be you and do what you want. If it’s your show, then you play the songs YOU want to play.” 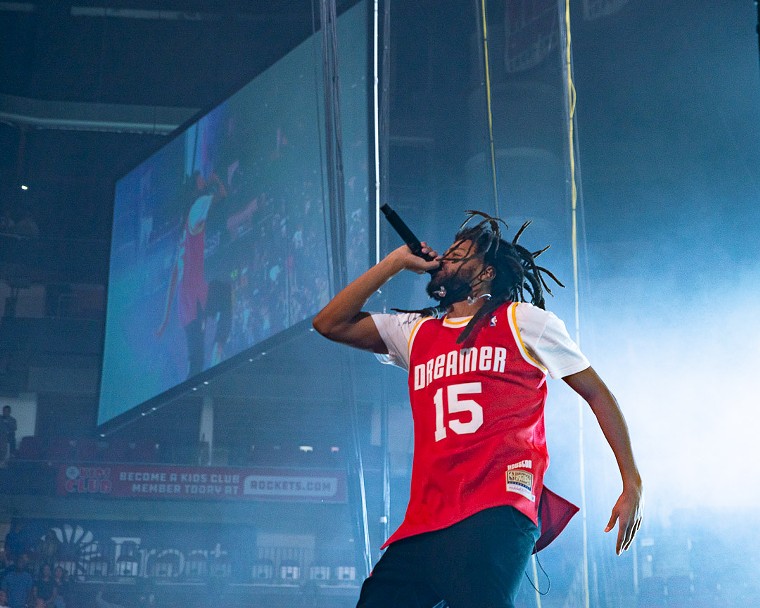 J. Cole made sure everyone knew how much of a basketball fan he is.
Photo by Jennifer Lake

Cole seems to maybe still struggle with his quick shot to fame and perception of being a true rapper/lyricist. With pressure to get a No. 1 single from his label for his first studio album, Cole composed “Workout,” a poppy hip-hop track that quickly topped the charts. But Cole was upset when his idol and hip-hop legend Nas expressed his dislike for the single, resulting in the track “Let Nas Down” on his following album Born Sinner. Nas eventually explained it as a misunderstanding in his return track “Made Nas Proud” but the toll was taken on Cole. From that point on most of the artist’s music and personal perception has changed. He now has a much more reserved and humble personality and the creation of more personal and thought-provoking music. 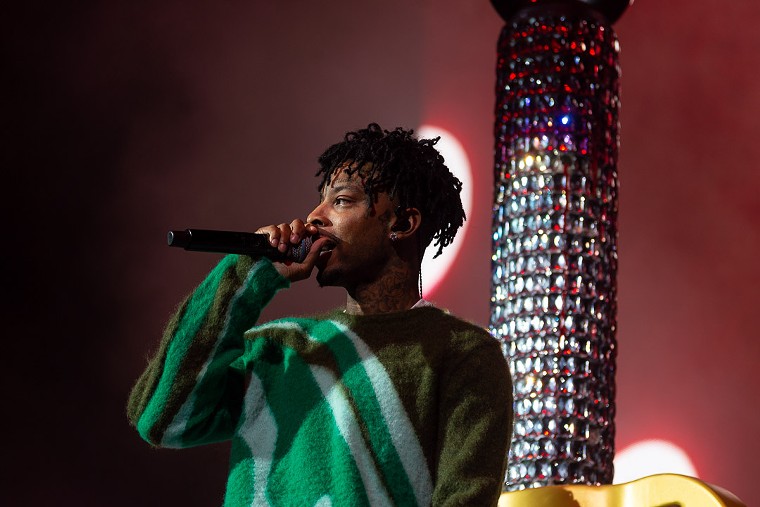 21 Savage performs at Toyota Center.
Photo by Jennifer Lake
Throughout the night, Cole continuously let fans know how grateful he was for the opportunity to be there. Even with the long list of songs to get through, the artist found time to bring out surprise guest and Dreamville alumni Ari Lennox to sing a few of her tunes before bringing out openers 21 Savage and Morray to performs some of there collaborative hits, such as Grammy award winning "A Lot" and "m y . l i f e " which includes all three touring artists.
KEEP THE HOUSTON PRESS FREE... Since we started the Houston Press, it has been defined as the free, independent voice of Houston, and we'd like to keep it that way. With local media under siege, it's more important than ever for us to rally support behind funding our local journalism. You can help by participating in our "I Support" program, allowing us to keep offering readers access to our incisive coverage of local news, food and culture with no paywalls.
Make a one-time donation today for as little as $1.