Rebecca Marie Gomez was 10 years old when she appeared on Sabado Gigante, the immensely popular and longest-running Spanish language variety show hosted by the legendary Don Francisco. On the show, little Rebecca was dressed in a purple jumpsuit in honor of her favorite artist, Selena Quintanilla. Her appearance and energy on that stage would foreshadow her rise to stardom.

Now known as Becky G, the Reggaeton and Latin Pop singer has a series of No. 1 hits under her belt, and has toured, performed, and recorded with such artists like J Balvin, Daddy Yankee, Prince Royce, Katy Perry, Enrique Iglesias, Bad Bunny, Pitbull, and Maluma. 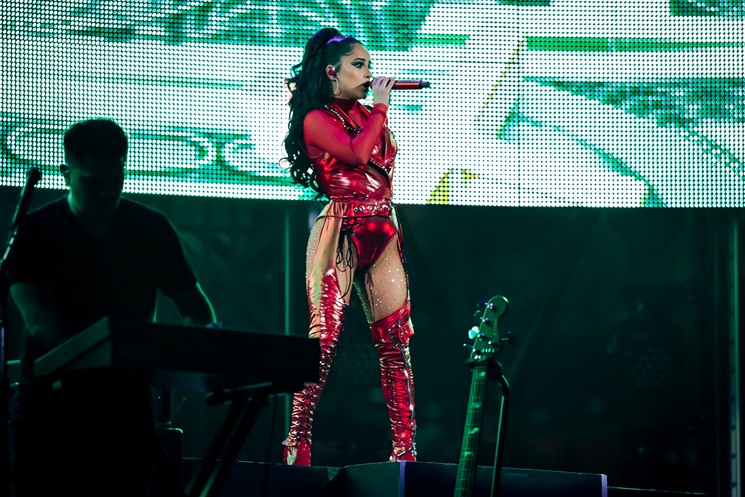 Becky G's debut studio album Mala Santa was released late last year, which included the hits "Sin Pijama" and "Mayores".
Photo by Marco Torres
She celebrated her 23rd birthday a few days ago, which made her performance at this year's RodeoHouston that much more special. She acknowledged on Twitter that this would be her "biggest show in America so far." With her parents and siblings in attendance here in Houston, she confidently appeared on the grand, rotating stage in front of 53,114 fans.

Dressed in shiny red suit and boots, Gomez resembled a strong Latina superhero, equipped with an enchanting voice and killer dance moves. She began her set with the first two tracks of her debut album, "MALA SANTA" and "DOLLAR".

Flashing a genuine smile as her fans applauded for more, she ran through some of her popular features like "Bubalu", "Mala Mia", "La Respuesta", and "Dura Remix". It certainly satisfied the mood of the audience who was waiting to dance and sing along to her fun and electric dance tracks.

Becky followed up with an acoustic set which really showcased her beautiful vocals, then after a dance break and outfit change, she retook the stage for "Booty" and "24/7".

Her biggest hits were reserved for the ending of the show, and as the first notes of "Mayores" sounded through the stadium, the crowd erupted. "This song changed everything for me" confessed Becky as the track began. She followed with "Sin Pijama", another one of her smash hits. 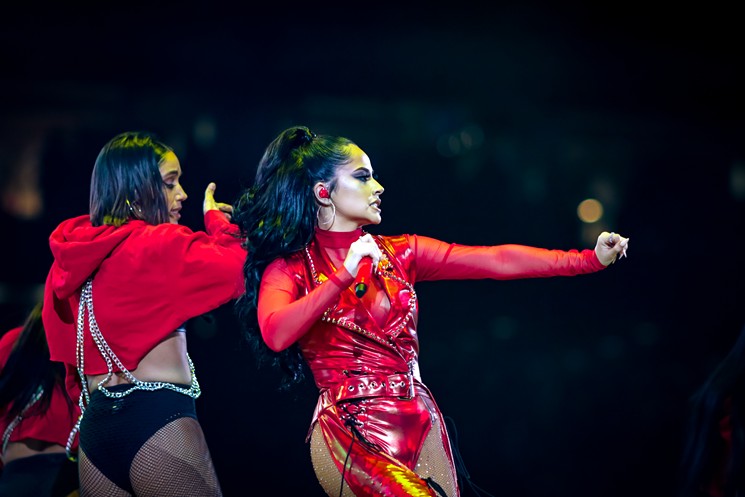 Becky G's ended her set with a rousing tribute to the late Queen of Tejano Music, Selena Quintanilla.
Photo by Marco Torres
And then, something incredible happened. After a few minutes of silence, the strong, unmistakable chords of Selena's "Como La Flor" pulled everyone out of their seat. It really was an electric, bone-chilling moment for every Selena fan. When the beat dropped and Becky began singing and dancing like her idol, it was simply magical.

The video screens alternated with footage of Selena's last performance at the Astrodome in 1995 and Becky's Sabado Gigante performance.

Her voice, movement, smile, and energy was amazingly perfect. As someone old enough and lucky enough to have seen Selena live, who loves Tejano music as much as I do, it was a real gift to be in attendance last night. I would actually pay big money to see a full Tribute To Selena show by Becky G.... she is THAT good.

Other have paid tribute to Selena in past Rodeo years, such as Kasey Musgraves also singing "Como La Flor" and Prince Royce singing "No Me Queda Mas" at last year's Rodeo. But Becky G's rendition was simply more touching and complete. She continued with "La Carcacha", "Bidi Bidi Bom Bom", and "Baila Esta Cumbia".

"Thank you Selena y gracias Houston, Texas!" shouted Becky as she waived goodbye and blew kisses towards the crowd.

Happy Birthday Becky G. Thank you for loving Selena as much as we do. 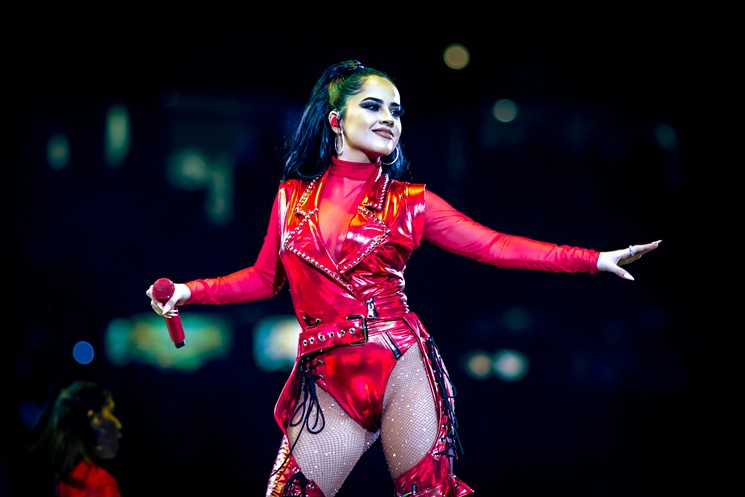 Becky G celebrated her birthday by performing for 53,114 fans at RodeoHouston.
Photo by Marco Torres
KEEP THE HOUSTON PRESS FREE... Since we started the Houston Press, it has been defined as the free, independent voice of Houston, and we'd like to keep it that way. With local media under siege, it's more important than ever for us to rally support behind funding our local journalism. You can help by participating in our "I Support" program, allowing us to keep offering readers access to our incisive coverage of local news, food and culture with no paywalls.
Make a one-time donation today for as little as $1.